Dr. Will Caster (Johnny Depp) is the foremost researcher in the field of Artificial Intelligence, working to create a sentient machine that combines the collective intelligence of everything ever known with the full range of human emotions. His highly controversial experiments have made him famous, but they have also made him the prime target of anti-technology extremists who will do whatever it takes to stop him. However, in their attempt to destroy Will, they inadvertently become the catalyst for him to succeed-to be a participant in his own transcendence. For his wife Evelyn (Rebecca Hall) and best friend Max Waters (Paul Bettany), both fellow researchers, the question is not if they can...but if they should. Their worst fears are realized as Will's thirst for knowledge evolves into a seemingly omnipresent quest for power, to what end is unknown. The only thing that is becoming terrifyingly clear is there may be no way to stop him.

Most moviegoers have become accustomed to seeing Johnny Depp deliver performances that could easily be described as otherworldly and uncanny. From an overly-emotional rebellious teen and a man with scissors for hands to a weirdly eccentric pirate captain and a vampire out of the past, he's freakishly good at playing larger-than-life but unearthly characters. In 'Transcendence,' Wally Pfister, the cinematographer and long-time Christopher Nolan collaborator making his directorial debut, uses Depp's talents for the strange and inhuman in a more literal sense. In fact, he pretty much carries the whole movie with a CGI image of himself and his voice, which is often used to dub over the voices of others, for a significant chunk of the production.

Present for only about a quarter the runtime total but still taking top billing, Depp plays Dr. Will Caster, a scientist on the brink of making artificial intelligence a reality. Compared to what he's clearly capable of as an actor, the well-intentioned and unpretentious doctor is rather bland and dull, yet audiences are meant to believe there are hints of a god complex suppressed beneath a very modest and humble exterior. As the narrative progresses, the inflated personality becomes crucial for his possibly desiring world domination and for us seeing him as the villain, but sadly, none of this ever truly registers in any concrete way. To be perfectly honest, we feel ambivalent about the man, and the movie oddly is okay with this, as we're never really made to care for any of the characters.

This is somewhat troubling because apparently there is a terrorist organization called R.I.F.T. which opposes the doctor's research and orchestrates a large-scale attack at the film's opening. In spite of their catchy slogans and their attractive leader Bree (Kate Mara), the group is easy to hate for their radical extreme tactics. These same worrying love/hate feelings extend to Will's best friend Max Waters (Paul Bettany), who turns from supportive good guy to literally handing the keys to his friend's destruction over to the enemy. The scientist's wife Evelyn (Rebecca Hall) is also not immune to these fluctuations of sympathy; however, her emotional journey is allowed a bit more time to ripen and develop as her love and loyalty slowly evolves to dismay and horror. 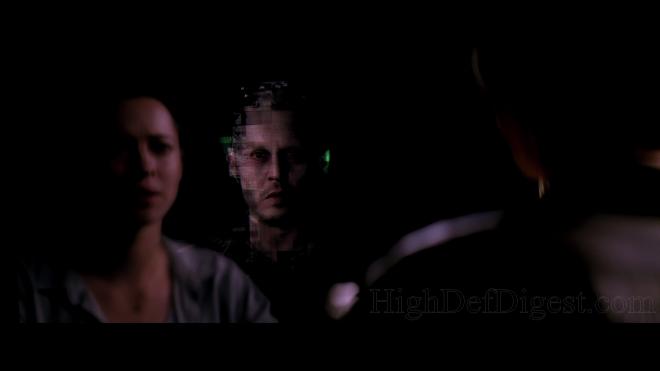 From a script by first-timer Jack Paglen, the plot comes with a spatter of intriguing ideas on the benefits of technology on the environment and its role is building a utopia. It can be argued, then, that the feelings of ambivalence are intentional and integral to the overall point. But that only serves to distance viewers because ultimately, we haven't a reason to care for anyone or the outcome of their maybe/maybe not noble contest against an A.I. takeover. The indecision of which side to favor also leads to a rather slow and boring start, and things don't pick up until Depp's Will finally uploads his consciousness to the internet where he quickly starts implementing some questionable actions. The ideas themselves are not explored in any significant way either, only merely touched upon and then we move on to the next digital thought bubble of man versus machine.

Pfister does a serviceable job as helmer with various little pockets of inspiration, notably the scenes with Hall and Depp's computer image. But there are just as many moments which fall flat, such as those with the physical Depp and Bettany's attempts to seem as if he's struggling with a moral dilemma. The story is continuously distracted with Cillian Murphy and Morgan Freeman as G-Men who apparently can't do anything with the assistance of their supposed enemies. At its worst, the terrorist group is weirdly efficient at knowing everything with spies everywhere, making them more competent government agents than Murphy and Freeman. 'Transcendence' comes with some amusing aspects and potential, but sadly, the end product fails to transcend its shortcomings.

Warner Home Video brings 'Transcendence' to Blu-ray as a two-disc combo pack with a flyer for an UltraViolet Digital Copy. The Region Free, BD25 disc is housed inside a blue eco-cutout case with a DVD-9 on the opposing panel and a glossy slipcover. After a promo and trailers, the screen changes to a static menu with generic options along the bottom.

But on closer inspection, the 2.40:1-framed image reveals that contrast has been slightly boosted, creating some distracting blooming and very evident samples of clipping in the whites. This also causes a bit of ringing around the edges of buildings and various objects in exterior shots. Black levels are affected though for the most part, they're stable, wavering between murky with overpowering shadows to accurate and clean. Despite being shot on 35mm film stock, the video is interestingly absent of grain, hinting at the possibility of digital noise reduction. Definition and clarity are rather superb; however, several scenes suggest they are the result of artificial sharpening, making for a substandard picture quality for a new release.

Things dramatically improve in the audio department with a somewhat low-key but also active DTS-HD Master Audio soundtrack. Much of the action takes place in the fronts, generating a broad and welcoming soundstage. Imaging displays excellent separation and balance between the three channels while a well-prioritized center delivers clear, pristine vocals. Dynamics and acoustics are richly detailed with outstanding extension and range between the mids and highs. This is particularly noticeable in the score of Mychael Danna, spreading wide across the screen with great warmth and superb fidelity. Low-bass is surprisingly powerful with a deep, weighty response that resonates throughout the room and hits fairly low (bass graph). The rears are continuously active with the subtle sounds of wildlife, the electric hum and buzz of computers or the bleeds of music, creating an overall satisfying and enjoyable lossless mix.

Cinematographer and long-time Christopher Nolan collaborator Wally Pfister makes his directorial debut with the sci-fi thriller 'Transcendence.' Despite some intriguing ideas that are never fully explored, the movie can't overcome from glaring plot holes and a story that can't decide who the villain is. The Blu-ray arrives with passable but problematic video and a better audio presentation. With a small collection of supplements, the overall package is a rental at best.

Sale Price 12.77
List Price 19.98
Buy Now
3rd Party 29.99
In Stock.
See what people are saying about this story or others
See Comments in Forum
Previous Next
Pre-Orders
Tomorrow's latest releases