The Man Who Fell to Earth: Limited Collector's Edition

Thomas Jerome Newton is a humanoid alien who comes to Earth to get water for his dying planet. He starts a high technology company to create the vast fortune he needs to build a return spacecraft and soon becomes a financial tycoon. Instead of moving forward with plans to save his home planet, though, he becomes enamored with his life on Earth.

After the art film successes of 'Walkabout' and 'Don't Look Now', British director Nicolas Roeg decided that his next cinematic trip would venture into the realm of science fiction. Naturally, Roeg's notions for how to make a sci-fi picture were rather idiosyncratic, concerned less with special effects or action or monsters than with ideas and allegorical themes. To tell the story of an extraterrestrial walking among men, who better in 1976 to cast than David Bowie?

Based on a fairly straightforward 1963 science fiction novel by author Walter Tevis, 'The Man Who Fell to Earth' concerns the arrival, initially into small town New Mexico, of a space alien on a mission to collect water for his dying planet. Disguised with an outwardly human (though unusually thin and frail) appearance, the visitor passes himself off as a British immigrant going by the name Thomas Jerome Newton. Using the advanced technical knowledge from his civilization, he recruits the assistance of a patent attorney (Buck Henry) to help him build a vast business empire and quickly amass great wealth, for the secret purpose of funding the construction of a vessel that will return him home to his desperate wife and family.

Fearing discovery, Newton avoids contact with other humans as much as possible and will only interact with a select few. He develops a fondness for a dim but endearing hotel chambermaid named Mary-Lou (the effervescent Candy Clark), and allows an inquisitive chemist (Rip Torn) into his inner circle. However, the reclusive millionaire's great success and influence attract the attention of the U.S. government, which may interfere enough to derail his plans. Also problematic is his growing weakness for human vices (especially alcohol) and emotions.

Written out so plainly like this, that sketch of plot seems almost simple. Most of the story points are adapted surprisingly faithfully from the source novel, which is told from the perspective of a highly intelligent and logical being trying to navigate a chaotic new world (ours). They're complicated and elevated by Roeg's direction and his vision for the material. The story is told more through images, often strange and unexplained, than through dialogue or plot. The narrative lurches through time, both in enigmatic wordless flashbacks to the barren alien planet, and in sudden leaps forward as other characters age but Newton remains unchanged. The film is layered with symbolism and thematic depth, and is always a beautiful object to absorb and digest, even when it's not entirely coherent – sometimes by design, and sometimes perhaps not.

The movie has virtually no special effects or action to speak of, and relies largely on David Bowie's performance to convey its science fiction ideas and tone. Aside from a few bit parts, this was the singer's first significant screen acting job of note, and he's front-and-center throughout the picture. By the time 'The Man Who Fell to Earth' was made, Bowie had retired his Ziggy Stardust stage persona and was into the "plastic soul" phase of his musical career. His Thomas Jerome Newton has none of the glam flamboyance of Ziggy, favoring instead a very reserved elegance and frailty with a mannered precision of speech. (Portions of this would work their way into his Thin White Duke character.) Nonetheless, Newton's slight strangeness in appearance and movement and behavior feel decidedly alien without needing a flame red mullet or a lightning bolt painted on his face. Much as he had when casting Mick Jagger in his directing debut 'Performance', Nicolas Roeg took a risk in trusting that a rock star's musical charisma could translate to cinema. Fortunately, this film project emerged at a perfect time in Bowie's life and career. He was not only the right star for it; he was perhaps the only person who could pull it off.

'The Man Who Fell to Earth' is a challenging, sometimes frustrating work that leaves many questions unanswered by its end. It's also a unique and visionary achievement that begs for repeated viewings to unpack and savor its many mysteries.

'The Man Who Fell to Earth' first came to Blu-ray back in 2009 on a (now out of print) disc from the Criterion Collection. In the meantime, the film's owners at Studio Canal have cut ties with Criterion and licensed North American distribution to Lionsgate instead. Whereas Criterion prepared its own video transfer and bonus content, the new Limited Collector's Edition was created by Studio Canal, with Lionsgate merely packaging and selling it.

The Limited Collector's Edition is a three-disc set consisting of one Blu-ray for the feature and extras, a DVD copy of the feature, and another DVD with the same supplements as Disc 1. The discs are stored inside a keepcase, which in turn fits into a cardboard box along with two booklets, four art cards, and a folded poster. One booklet contains a pair of essays about the film and its soundtrack, while the other appears to be a reproduction of vintage press kit materials. (Nowhere is this explained.) All of this is awkwardly shoved into the box with a flimsy cardboard holder. I imagine that Lionsgate plans to reissue just the discs and keepcase on their own at some point in the future, minus the box, booklets and other clutter.

The Blu-rays from both Criterion and Studio Canal include only the film's 139-minute director's cut. During its theatrical release in 1976, the American distributor removed 20 minutes of footage and rearranged the order of some scenes. To my knowledge, that version of the movie has never been released on DVD or Blu-ray, but did appear on VHS and Laserdisc.

The Limited Collector's Edition packaging claims that 'The Man Who Fell to Earth' was "stunningly restored to mark the film's 40th anniversary in 2016." Presumably, the Blu-ray derives from the same source as last year's brief theatrical re-release, which was advertised as a 4k restoration. I can't validate the 4k part, but I do take some issue with the word "stunningly."

First, some context: Before he segued into directing, Nicolas Roeg started his career as a cameraman and cinematographer. He knew the art of photography as well as or better than most directors of his day. However, he was part of the school of filmmakers in the 1960s and '70s who eschewed the slick technical perfectionism of Hollywood product from earlier decades in favor of something a little rougher and improvisational. For the purposes of a modern film-to-video transfer, 'The Man Who Fell to Earth' has what might be termed as difficult photography. It's often soft and grainy. Roeg's fondness for zoom lenses, diffusion filters and natural light don't lend themselves to pinpoint sharpness or clarity. Some shots are even clearly out of focus. Nevertheless, he crafts many striking compositions and images. 'The Man Who Fell to Earth' is remembered, rightly, as a very visual film.

The Criterion Collection Blu-ray from 2009 was sourced from a high-definition master supervised and approved by Nicolas Roeg. Viewed today, that 2.35:1 transfer (which was originally created for DVD in 2005) shows its age. It's overall a good-looking disc, but is a little noisy and I feel confident that a good 4k scan of the film elements could eke more detail and more vibrant colors from the source. Unfortunately, 4k or not, the work Studio Canal has performed does not accomplish that goal. 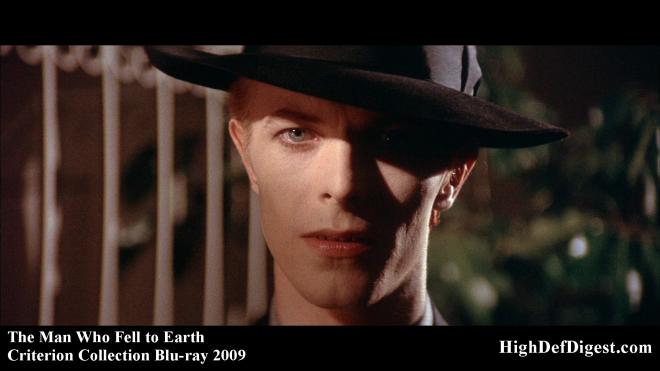 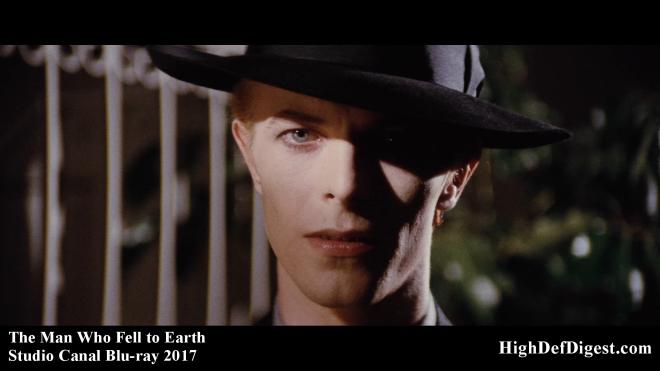 Even viewed on its own without a comparison (I watched it first, without having seen the Criterion disc in years), it's obvious that something is wrong with the Collector's Edition Blu-ray. Encoded at 1080p/AVC MPEG-4, the transfer looks faded and washed-out, like a dupe theatrical print. Detail is very poor. Contrast has been pumped up, and colors (especially flesh tones) look sickly and bleached.

I wouldn't call the Collector's Edition unwatchable. Its best scenes, which are mostly in the second half, look decent enough. Even so, it's decidedly a disappointment. Without question, the Criterion disc is superior in every scene I compared. It has much more natural colors and contrast, and even has better detail and textures despite the Studio Canal disc supposedly coming from a 4k scan. 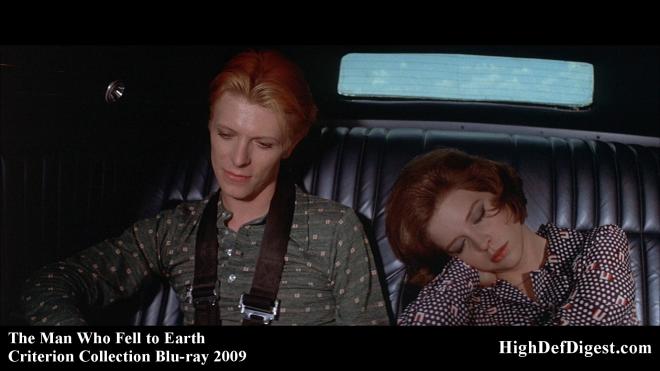 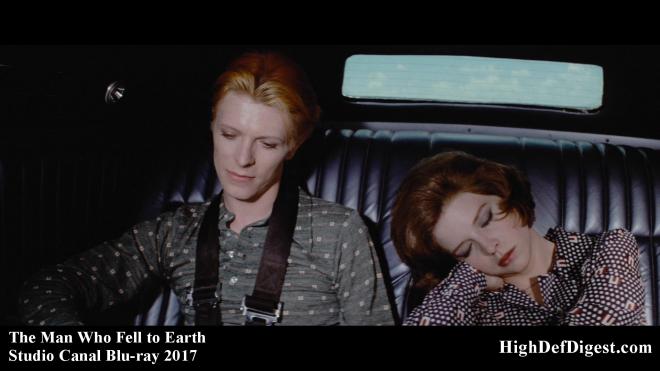 Fortunately, the Collector's Edition has much better audio than video. Like most Studio Canal discs, the soundtrack is authored at a very loud default, so you'll probably need to pull your volume down from your usual listening levels. With that done, 'The Man Who Fell to Earth' has a fascinating sound design filled with unusual music and noises, all of which are presented with fine clarity here. Encoded in lossless DTS-HD Master Audio stereo format, this is a matrixed surround track and will pull quite a bit of ambient sounds into the surround speakers and heights, if you have them. The music is rich and bassy with a lot of stereo separation.

The older Criterion Blu-ray was authored as PCM stereo. Aside from the starting volume difference, the Collector's Edition may also goose the bass and some of the sound effects levels. I can't speak with authority as to which is more accurate to the original production (at a guess, probably the Criterion), but they both sound very good.

All of the bonus features found in the Collector's Edition are duplicated on both the Blu-ray and DVD discs. The fact that they're all authored in standard definition video is a disappointment this far into the Blu-ray era. On top of that, the studio has done something very strange to the movie clips intercut with the interviews and featurettes which makes them look like some sort of Soap Opera Mode frame interpolation was applied. I'm not even sure how that's possible on a disc, but the clips look decidedly odd.

The Criterion Collection Blu-ray released in 2009 had a proprietary assortment of features, including an audio commentary, different interviews and a still gallery of photos and sketches. An older 1993 Laserdisc edition from Criterion offered some deleted and alternate scenes that have never been seen again for some reason.

Criterion's DVD from 2005 was packaged with a paperback copy of the original novel by author Walter Tevis.

Forty years after its release, Nicolas Roeg's 'The Man Who Fell to Earth' remains a fascinating, confounding, frequently brilliant work of experimental science fiction. Unfortunately, the new Limited Collector's Edition Blu-ray from Studio Canal suffers an inexcusably poor video transfer. Fans who still own the superior Criterion Collection Blu-ray from 2009 are advised to hold onto it, and should only consider looking at this one for the new bonus features, which are pretty decent (though, to be honest, not tremendously better than Criterion's).

Sale Price 95
Buy Now
3rd Party 95
In Stock.
See what people are saying about this story or others
See Comments in Forum
Previous Next
Pre-Orders
Tomorrow's latest releases