In underworld terms, Chas Devlin is a "performer," a gangster with a talent for violence and intimidation. Turner is a reclusive rockstar. When Chas and Turner meet, their worlds collide - and the impact is both exotic and explosive. James Fox and Mick Jagger indelibly play Chas and Turner in this spellbinder of illusion and reality, decadence and decay. Fugitive Chas hides in Turner's cavernous house. Events then spiral into a eerie breakdown of barriers and roles in which Chas sees his sense of reality vanish. And Turner's experiment of self-discovery leads to a shocking final performance of his own. Co-directed by Donald Cammell and Nicolas Roeg, Performance has become a modern movie legend. Experience it and understand why.

At the height of the Rolling Stones' popularity, front man Mick Jagger expressed some desire to try his hand at acting, and studio Warner Bros. was eager to package a product with his name all over it, hoping that he'd be as much of a draw to the 1960s youth audience as Elvis and the Beatles had been. At the time, it was still possible for even first time co-directors like Donald Cammell and Nicolas Roeg (a painter and cinematographer, respectively) to be entrusted with such a project and left largely to their own devices with a minimum of prying studio interference. (Those days are long past, sadly.) The completed film they delivered, called 'Performance', was not at all what anyone expected.

Despite being top-billed (twice!) in all the advertising, Jagger isn't really the star of 'Performance'. He doesn't appear on screen for more than half an hour, and his first line of dialogue is ten minutes after that. James Fox ('The Servant') plays lowlife British thug Chas, an enforcer for the colorfully-named mobster Harry Flowers. Chas is a grade-A narcissist. He dresses in fancy clothes, keeps an immaculate modern apartment, and obsessively stares at his own reflection, even (and especially) during sex. Though he isn't self-aware enough to be cognizant of it, his life is already a performance, one of putting on airs of being a proper gangster.

After getting embroiled in a murder, Chas skips town and attempts to lie low until the heat dies off. To that end, he rents a room at an unlikely place – a grungy basement apartment owned by a reclusive, androgynous rock-and-roller named Turner (Jagger), who already shares the space with two live-in girlfriends. In order to blend in with their Bohemian lifestyle, Chas pretends to be another kind of performer – a juggler, of all things. The more time he spends in their company, the more Chas feels his sexuality and his sense of personal identity threatened. Eventually, Harry Flowers' men come calling, looking to tie up a loose end that had drawn too much attention to their boss, but the Chas they'll find is not the Chas they expect.

In very basic terms, that's the gist of the plot. Cammell and Roeg, however, were never much interested in conventional narrative. Their film is an experimental work that fuses elements of French New Wave formalism, Swedish existentialism, and various literary and philosophical ideas into a tale of sex, drugs, rock & roll, and madness – all under the aegis and with the plentiful resources of a major studio that thought it was financing a straightforward gangster picture. The movie is confusingly structured in an almost confrontational manner with jagged editing that relies on subliminal flashes of imagery to convey major story points. The filmmakers wanted to deconstruct the language of cinema, and force viewers to actively work at decoding the events depicted on screen. They indulge in distracting artifices like sudden audio drop-outs, extended montages, and even a Fourth Wall-breaking musical number (not to mention some envelope-pushing sex, nudity and violence). More important than the details of the plot is all the deeply-layered symbolism, which challenges notions of identity and reality. Who is anyone, really? Is life just an elaborate show?

A consummate professional, Fox delved deep into his role with Method research and is quite excellent at conveying the character's complex transformation. While not a trained actor, Jagger acquits himself well enough to play a variation on his public persona at the time. The Turner character is supposed to be an enigma, and he gets that across. Jagger would act again only infrequently in future years, but he doesn't embarrass himself here.

Needless to say, this was not at all what the executives at Warner Bros. wanted from their Mick Jagger vehicle. They hated what the maverick directors handed to them so much that they shelved the film for a couple years and almost buried it completely. Test audiences and critics were not much more receptive to it either. The movie was finally released in 1970 and found a cult audience among the counterculture, many of whom felt that it spoke directly to them. Eventually, over time, 'Performance' came to be regarded as an important example of surrealist cinema.

Judged today, enough of the film's techniques have been imitated or co-opted into the mainstream that it doesn't feel quite as revolutionary as it once did. Other aspects are, frankly, kind of pretentious, which wouldn't be a problem if the story offered a sturdier framework to support them, or at least a deeper emotional connection to the characters, who are used purely as ciphers. Regardless, it remains an intriguing work by daring filmmakers, and opens itself up to greater appreciation with repeat viewings. 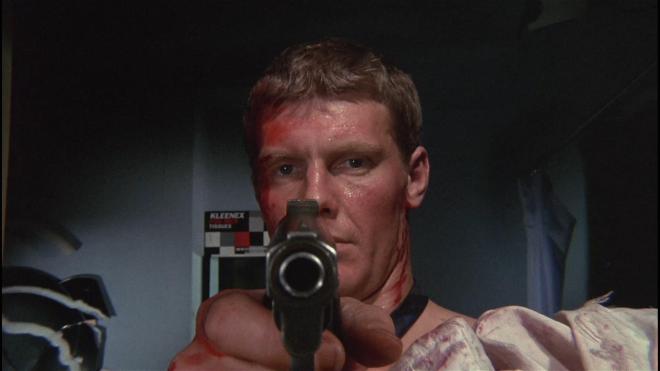 'Performance' comes to Blu-ray as part of the Warner Archive Collection. Although the disc itself is a professionally pressed and authored copy (not a burned BD-R), it's a very minimalist affair packaged with ugly and misleading cover art. The boring, static menu doesn't even offer a Scenes Selections guide to the chapter stops.

The disc contains the uncut version of the movie. During its theatrical release, the studio trimmed some of the film's sex and violence to appease the MPAA and various international censor boards.

Even though the film's poster art, promotional materials and video cover art have traditionally spelled the title as 'performance.' (no capitalization, with a period at the end of the word), the actual on-screen text during the movie has no such affectation.

Like most (if not all) of the Blu-rays offered through the Warner Archive, 'Performance' appears to be based on an older existing video master without the benefit of a fresh film scan or any new clean-up work. Fortunately, it looks fairly good anyway, at least for a movie with such difficult photography. Although co-director Nicolas Roeg started as a cinematographer and shot this movie himself, he had a fondness for dark and grainy imagery.

The 1080p/AVC MPEG-4 transfer has a reasonable (though hardly exceptional) sense of detail and sharpness, with a lot of visible film grain that hasn't been manipulated or smeared away. Colors are solid, and contrasts are frequently rich. Black levels sometimes fluctuate and look a little washed out, but as far as I can tell that stems back to the original photography. Many scenes were shot with diffusion filters that soften textures, a few were shot on even grainier 16mm film, and scenes with optical effects such as dissolves (of which there are many) can look dupey, but none of these are video transfer flaws. More problematic is some mild edge ringing that intrudes in a few scenes. That probably sounds worse when I describe it than it actually looks, though.

Annoyingly, the opening credits are heavily windowboxed with large black bars on all four sides of the frame. After the credits end, the picture expands to (very nearly) full-frame 16:9. Technically, the image measures about 1.76:1, but it's unlikely that anyone would notice the tiny pillarbox bars on the left and right without staring at a screencap. A British production of this era would have been composed for projection at 1.75:1 in Europe with enough leeway to be matted down to 1.85:1 in the United States. Aside from the windowboxed portion, the Blu-ray's aspect ratio is well within tolerances. 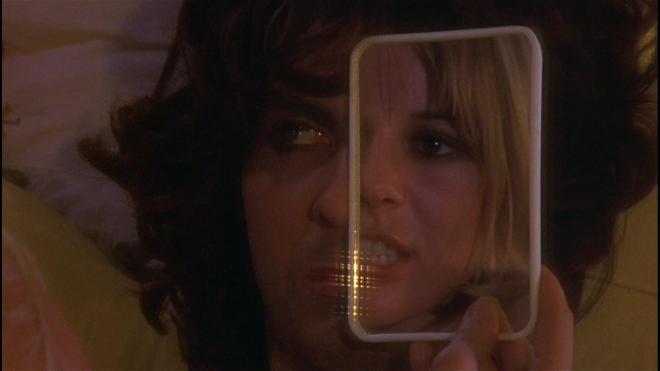 The 2.0 mono soundtrack may be encoded in lossless DTS-HD Master Audio format, but it has a very dated level of fidelity. The audio sounds harsh, with weak sound effects, limited dynamics, and severe volume swings from quiet to stridently loud. I can't say for certain how much of this is endemic to the production and how much is an audio mastering issue. I suspect that the sound quality has some room for improvement.

For all that, the big musical number near the end of the movie sounds pretty good. I assume that was probably recorded and mixed at the Rolling Stones' music studio.

As part of the directors' experiments with film language, the sound mix drops out to silence at unexpected times and has many scenes with confusing overlapping sounds layered on top of one another. These effects are deliberate.

At the time of the film's 1970 theatrical run, Warner Bros. demanded that actors with thick British accents be overdubbed for the American audience. The studio's DVD release in 2007 actually restored the original actors' voices, but that soundtrack was erroneously missing a line of Mick Jagger's dialogue while his face visibly mouthed the words. The Blu-ray fixes that problem and restores the line ("Here's to old England!" at time code 1:29:56). However, judging by the sloppy, poorly-synced ADR looping of several other characters, it appears that the entire soundtrack reverts to the theatrical, dubbed sound mix in order to get that line back. I have no doubt that this will be greeted with mixed feelings by fans. 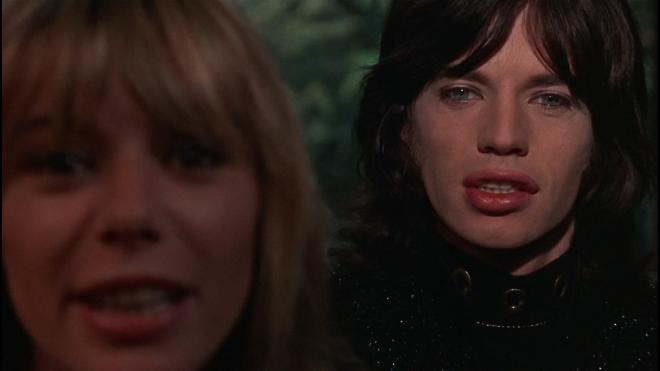 All of the bonus features from the 2007 DVD release of the film have been carried over to Blu-ray. 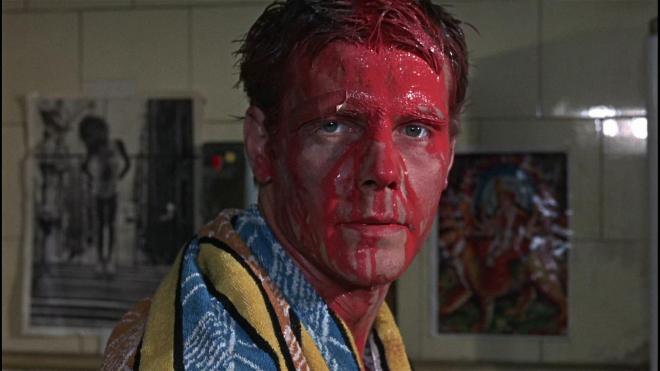 Misunderstood and hated by many during its day, 'Performance' outlived its critics to become a landmark art film. I'm not certain that it's really the masterpiece that its biggest fans may claim, but it's definitely a fascinating movie that invites repeat viewings.

The Blu-ray from the Warner Archive Collection is not the full-fledged restoration that the film perhaps deserves, but it's at least adequate in most respects and merits a recommendation for interested viewers.

Sale Price 17.99
Buy Now
3rd Party 14.11
In Stock.
See what people are saying about this story or others
See Comments in Forum
Previous Next
Pre-Orders
Tomorrow's latest releases