Donald Sutherland and Julie Christie mesmerize as a married couple on an extended trip to Venice following a family tragedy. While in that elegantly decaying city, they have a series of inexplicable, terrifying, and increasingly dangerous experiences. A masterpiece from Nicolas Roeg, 'Don’t Look Now,' adapted from a story by Daphne du Maurier, is a brilliantly disturbing tale of the supernatural, as renowned for its innovative editing and haunting cinematography as its explicit eroticism and unforgettable denouement, one of the great endings in horror history.

Don't ask me why, but when I was 10 years old, my parents took me to see 'Don't Look Now,' director Nicolas Roeg's now-classic exercise in emotional and supernatural horror. And, boy, did it open my eyes! I'm sure it was the first R rated film I'd ever seen, and I'm doubly sure my parents had no clue about the film's adult content, graphic violence, and eerie presentation. The occult always fascinated my mother, and she also admired Daphne du Maurier, author of the romantic mystery 'Rebecca' and the short story upon which 'Don't Look Now' is based. Obviously, my mother expected the film's tone to resemble the elegant Hitchcockian suspense of 'Rebecca,' but she was dead wrong, and I can only imagine how she must have squirmed and berated herself during the explicit sex scene between Julie Christie and Donald Sutherland, as well as the brutal and shocking climax. To say her naïve and impressionable son received an education that day is an understatement! The movie etched many indelible images into my brain, and over the course of the next four decades, they would occasionally - and quite vividly - reappear.

A few days ago, I watched 'Don't Look Now' for the first time since that initial viewing. One might think my mature perspective and jaded attitude would alter my pre-pubescent perception of the film, but not so. On the contrary, the visceral reactions I felt as a child only seemed to intensify, and even though I remembered the plot and a surprising amount of minor details, I found this creepy paranormal tale even more unnerving, intriguing, and ultimately devastating, because now - as a husband and father - I could really relate to it. While 'Don't Look Now' doesn't seem to possess the same cachet as such iconic thrillers as 'Diabolique' and 'Psycho,' Roeg's brilliantly mounted, flawlessly executed motion picture easily equals them and stands as one of cinema's most artistic and captivating suspense films.

A great deal happens over the movie's circuitous course, but the story is almost simplistic. In the opening scene, Christine, the young daughter of John and Laura Baxter (Sutherland and Christie) frolics with her brother in the park outside their English country home while their parents relax indoors. The girl wears a bright red rain slicker even though it's sunny outside, and when she tries to retrieve a ball she inadvertently threw into the pond, she drowns. Just before the tragedy occurs, John has a startling premonition, but can't save his daughter in time. Christine's death shatters the family, and months later, John and Laura retreat to Venice, where John oversees the restoration of a church, and he and Laura try to put the past behind them and reconnect.

One day at lunch, the couple attracts the attention of two spinsterish sisters, one of whom is blind yet possesses what the psychics call a "second sight." She tells Laura not to be sad, because she's seen Christine sitting between them and laughing. Buoyed by this revelation, Laura begins to find peace. John, however, doesn't believe in such mumbo-jumbo, and his daughter's death continues to haunt and torment him. He even sees a little figure cloaked in red occasionally skulking in the shadows and doorways of remote Venice alleys. Could it somehow be Christine? When Laura visits the sisters again, the psychic tells her John also has the gift - and curse - of second sight, but either consciously or subconsciously rejects it. She also believes a great and imminent danger stalks John while he's in Venice, and advises the couple to flee the city as soon as possible. Bizarre occurrences seem to validate the medium's prophecy, but will John and Laura heed the warning?

At its core, beneath the metaphysical shadings, frightening episodes, and palpable sense of foreboding, 'Don't Look Now' is a richly layered portrait of grief and its impact on marriage. Trapped in their own private hells, wracked with guilt, and plagued by depression, John and Laura do their best to get through each day. Bits of anger and resentment seep through cracks in their armor and an overwhelming desire to forget consumes them, yet through it all they try to hang on to and nurture the love that both binds them and rips them apart. Do they cling to Christine's memory or let her go? And how do they ease the pain and heal after such a horrific, life-altering experience?

Plot, of course, is important to any film, and the narrative twists and turns of 'Don't Look Now' certainly grab our attention and heighten the movie's power. Yet without its brilliant and innovative construction, dazzling editing, and myriad subtle touches that can only be properly digested and appreciated during repeat viewings, 'Don't Look Now' would never be regarded with such respect and reverence. Roeg masterfully flashes forward and backward, manipulating time to create a dream-like (or nightmarish?) sense of confusion and unease. As John says early on, "Nothing is as it seems," and Roeg abides by that simple statement, employing quick yet significant cuts to startle, titillate, and tease us, and expertly using sound and the macabre atmosphere of Venice's underbelly to create an aura of anxiety and dread. Best of all, he drains his palette of the color red, only to inject jarring splashes of the vibrant, highly significant hue in key frames so it instantly attracts our gaze. Roeg, like many of the finest directors, bends the rules of filmmaking to satisfy his vision and craft a true work of art, and with 'Don't Look Now' he fully flexes his creative muscle. The result is a fascinating and exhilarating viewing experience from start to finish, and one that continues to hold us in its grasp long after the impact of the unforgettable climax has faded.

Sutherland and Christie make an odd couple, but they create fantastic chemistry, achieving an easy familiarity with each other that makes their screen marriage utterly believable. Their controversial sex scene - so raw and intimate it spawned a persistent legend they actually copulated on camera - cements their bond, so even when tensions creep into their relationship, we never doubt their love. Both actors appear disarmingly natural even under the stressful circumstances, and their astute portrayals really draw us into their desperate, claustrophobic world. The rest of the cast is largely unknown, which makes them creepily credible as well.

Beautifully shot, expertly edited, superbly acted, oozing with atmosphere, and directed with boundless style and an incisive sense of purpose, 'Don't Look Now' is a mesmerizing and haunting motion picture that's so much more than a taut supernatural thriller. Sure, it's scary as hell, but it also brims with artistry, warmth, and humanity, elements that make the movie more engrossing and powerful. In many ways, Roeg crafts a rogue film, filled with innovation and arresting images that stick in our brains long after the lights come up. Without a doubt, 'Don't Look Now' is one of his finest works and one of the all-time great suspense films. 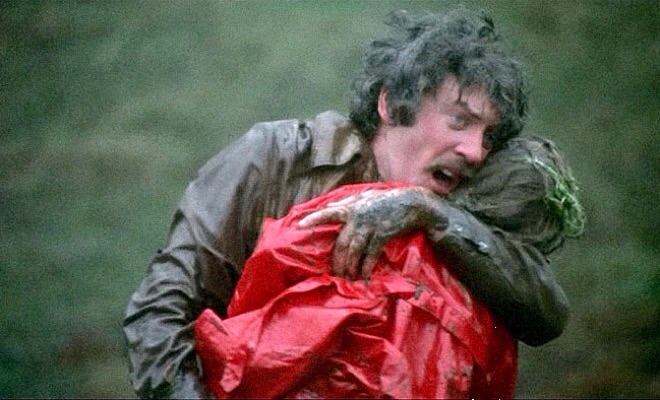 'Don't Look Now' arrives on Blu-ray packaged in a standard Criterion case. A 16-panel fold-out booklet that features an essay by film writer David Thompson, cast and crew listings, transfer notes, and a few color scene shots is tucked inside the front cover. Video codec is 1080p/AVC MPEG-4 and audio is LPCM mono. Once the disc is inserted into the player, the static menu with sound effects immediately pops up; no previews or promos precede it.

According to the liner notes, this new 1080p/AVC MPEG-4 digital transfer, approved by director Nicolas Roeg, was "created in 4K resolution...from the original camera negative." The results are often stunning, with superior contrast and clarity enhancing the atmosphere of foreboding and highlighting the decaying beauty of back alley Venice. Grain can be a bit thick at times (most likely due to low light levels during shooting), but shadow delineation is quite good, background elements are easy to discern, and no print defects dot the pristine source material. Roeg intentionally mutes the color palette to allow his intermittent splashes of red to achieve the greatest possible impact, and the effect looks fabulous in high definition. Even in distant long shots, bits of red possess substantial pop, whether they be children's wool caps, leggings hanging on a clothes line, a woman's jacket, the stripes on a white bouncing ball, a lunchbox, or the Red Riding Hood-like cape that flits in and out of the Venice shadows. Black levels are rich and deep, whites are a tad creamy, and fleshtones remain natural and stable throughout. Close-ups, especially those of Christie, look a bit diffused, but fine facial features are still nicely rendered. Very little crush and no noise could be detected, and any digital tinkering escapes notice. Though not as smooth and sharp as some viewers might like, this transfer beautifully replicates the movie's original look, which should make fans very happy indeed.

Some noticeable distortion occasionally creeps into the lossless LPCM mono track, most notably when bass frequencies predominate, but otherwise the mix, which was "remastered at 24-bit from the 35 mm magnetic track," outputs clear, precise sound with plenty of nuance and shading. Venice is rife with aural accents, such as trickling water, footsteps clicking and echoing against concrete walkways, fluttering pigeons, and creaking wood, and all of them come across with a pleasing crispness that lends the film a marvelously creepy ambience. A wide dynamic scale provides the track with some essential breathing room, and excellent fidelity and tonal depth help Pino Donaggio's haunting themes fill the room. Dialogue can be a tad problematic at times, especially if spoken in hushed or mumbled tones, but for the most part it's easy to comprehend, and no hiss, pops, crackles, or other age-related imperfections could be detected. Sound is an essential aspect of this atmospheric thriller, and though this track isn't perfect, it's highly immersive and quite memorable.

As usual, Criterion puts together a comprehensive extras package that explores the film from a multitude of angles. The only aspect that's missing is an audio commentary, and its omission is suprising, considering the movie's meaty nature. Still, there's enough material here to satisfy the most obsessive fan of 'Don't Look Now,' as well as those who are discovering this spellbinding thriller for the first time.

'Don't Look Now' may have been released more than four decades ago, but it remains one of the most unsettling, unnerving, stylish, and innovative thrillers in cinema history. With a paranormal plotline filled with intrigue and eccentricity, first-class performances from Julie Christie and Donald Sutherland, and flawless, inventive direction by Nicolas Roeg, this eerie chronicle of a grieving couple's bizarre Venetian odyssey weaves a hypnotic spell that keeps us riveted up through the shocking, unforgettable climax. Criterion's Blu-ray presentation features nicely restored video and audio transfers, as well as a comprehensive spate of supplements, all of which combine to provide a fascinating film experience. Once seen, 'Don't Look Now' won't be soon forgotten, so proceed with caution...but by all means, proceed. This impeccably mounted exercise in chills should not be missed, and comes very highly recommended.