Newly Re-mastered in HD! Screen icons Sophia Loren (Yesterday, Today and Tomorrow) and Anthony Perkins (Psycho) star as a poor Parisian couple who embark upon a simple get-rich-quick-scheme... only to find themselves hurtling blindly down a winding road of desperation, deceit and madness. In the grand tradition of Double Indemnity and The Postman Always Rings Twice, Five Miles to Midnight weaves a constantly tightening web of suspense that grips the viewer by the heart and doesn t let go until the final frame. Filmed entirely in Paris in the stark contrasts of black and white, Five Miles to Midnight is a psychological suspense thriller of the highest order. Two of the film s best features are the stunning photography by Henri Alekan (Wings of Desire, Topkapi) and the haunting score by Mikis Theodorakis (Serpico, Z). Stylish direction by Anatole Litvak (Sorry, Wrong Number) and featuring wonderful performances by Gig Young (City That Never Sleeps) and Jean-Pierre Aumont (Hotel Du Nord).

A unique plot hook and story can only go so far when constructing what should otherwise be a well-oiled, down and dirty thriller. You have to have a director who knows how to set up tension. Not just by establishing threats to the main characters or staging unnerving chase sequences, you have to build it all towards a rewarding payoff. You also need to have a cast with the right chemistry to make their plight not only believable but also relatable for the audience. 1962's 'Five Miles to Midnight' from director Anatole Litvak and starring Sophia Loren, Anthony Perkins, and Gig Young has a lot going for it, but the best elements never quite come together as they should.

Lisa Macklin (Sophia Loren) and her husband Robert (Anthony Perkins) are stuck in a deteriorating marriage. Whatever love they once shared for each other has been ground into dust. After a particularly vicious fight, Robert leaves Paris for Morocco on a business trip. Before Robert is to leave, Lisa drops the bombshell that she doesn't want to ever see him again. And, for a brief moment, that wish comes true. The next morning Lisa learns that the flight Robert was on crashed and there were no survivors. Her freedom is bittersweet, but now she can move on - or so she thinks.

After returning home from the funeral, Lisa discovers Robert in their apartment wounded, but otherwise alive and well. Shocked by her husband being alive, she probes for answers, but all Robert can do is tell her he was miraculously thrown from the crash. When she's about to call for a doctor, Robert immediately stops Lisa from making the call. He has a better idea up his sleeve. Just before he got on the plane, Robert had the brilliant idea to take out a $100,000 insurance policy - a policy he wants Lisa to collect on! While Robert sees this as an opportunity to improve their lot in life, Lisa is stuck in a precarious position that only gets worse when astute insurance investigator David Barnes (Gig Young) starts looking into the circumstances of the case. 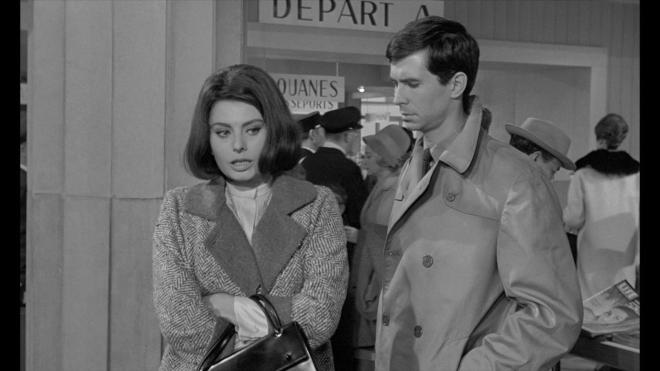 'Five Miles To Midnight' has a fantastic plot setup with a man who should be dead that is still alive. There is his wife who is in the position of lying to authorities about her husband's death so she can collect a check for him. There is a crack detective on the case who smells a rat. On top of all that there is the strained relationship between husband and wife that adds its own level of danger and intrigue. Take all of those elements together, and this movie should work brilliantly. Unfortunately, it's only mediocre. None of these plot aspects come together in a natural way that builds tension. On top of that, the cast just doesn't seem fit together either.

Chemistry is a big factor in why I found 'Five Miles To Midnight' to be an underwhelming film. The worst part of this is each member of the cast is great in their respective roles. Sophia Loren plays a fantastic Lisa Macklin, a woman fed up with her lying husband who is thrust into a position of having to lie for him otherwise become an accessory to fraud. Anthony Perkins nails his Robert Macklin, a clearly unscrupulous individual with pie-in-the-sky dreams for riches while steadily becoming a threat to his wife's life and freedom. Gig Young is great as the perceptive sleuth who goes on instinct feeling something isn't quite right about the circumstances of the case. These three incredibly talented performers should be cinematic gold, but instead, they're just glimmering iron pyrite. They look like the real deal, but the chemistry is all off. Loren and Perkins don't really play a convincing husband and wife. Likewise Loren and Young don't play well together as Detective and damsel in distress, they feel like they're just filling prescribed roles rather than playing genuine characters.

That isn't to say that 'Five Miles To Midnight' is a bad film mind you. The movie itself actually turns out to be a pretty decent way to spend a couple hours. It's just the various plot points and tools to build suspense and the cast doesn't really work well enough to make the final product as great as it could have been. It's still a very watchable film and the individual performances are entertaining, but for everything that I enjoyed there were aspects that I didn't and even its impressive conclusion isn't enough to make up for the film as a whole. It's worth a watch if you're new to it, but don't expect too much either.

'Five Miles To Midnight' arrives on Blu-ray thanks to Kino Lorber and their Studio Classics line. Pressed onto a Region A BD25 disc, the disc comes housed in a standard Blu-ray case and comes with reversible artwork. The disc opens directly to the film's main menu with traditional navigation options.

With a newly remastered 1.66:1 1080p transfer, 'Five Miles To Midnight' makes a nice leap to Blu-ray. With a visible amount of fine film grain, details look fantastic. Facial features, the impressive production design of the Macklin apartment, as well as costuming and scenery all display a lot of fine details. Black levels and shadows are well defined and the greyscale is stable ensuring that the image retains a nice sense of three-dimensional depth to it. The source print of this transfer is in pretty decent shape, only an occasional scratch and some very mild speckling to report. All around this is a very good looking release.

Unfortunately, the English DTS-HD MA 2.0 track for 'Five Miles To Midnight' isn't as sharp as one would hope. It would appear that there were a number of scenes that were dubbed over and then there are a couple of sync issues where the actor in question clearly is speaking and yet their mouth isn't moving. It isn't terrible, but it is more than a little distracting at times and pulled me out of the moment. Sound effects and background atmospherics are present, but they feel leaden. Dialogue is cleanly heard at least, but every now and again the film's score by Mikis Theodorakis can overpower the mix and becomes rather shrill in a few instances. The track works but it could use some TLC to balance out its issues.

Alternate French Scene: (HD 7:49) There really isn't too much to this moment other than to serve as a means of showing how the film looked in a different language.

I wish I could say 'Five Miles To Midnight' was some lost gem of a thriller, but it isn't that. It's decent, it has a great cast, but the lack of chemistry and some clunky plotting keeps the film from being truly great and unique. It's watchable and a good bit of fun, but some may be let down by it considering the pedigree involved. Kino Lorber brings the disc to Blu-ray with an outstanding image transfer, a muddled audio track, and an alternate scene and some trailers to round out the extras. Fans of the film should be happy with this release, but if you're new to the film, give it a rent first and make sure it's your brand of thriller.