Tony Hunter, a fading film star decides to return to his former glory, the Broadway stage. His playwright-songwriter friends hook him up with Broadway's hottest director, Jeffrey Cordova, who proves that the "new" theater traditions can be an awkward fit with the old.

The last of the great original Hollywood musicals, 'The Band Wagon' contains some of most artistic and exhilarating dance routines ever put on film. Fred Astaire and Cyd Charisse supply the terpsichorean magic, and director Vincente Minnelli builds a memorable movie around them, infusing an old-fashioned backstage story with his trademark style and sophistication. Some might term 'The Band Wagon' a darkly comic take-off on the Mickey Rooney-Judy Garland let's-put-on-a-show musicals, as it chronicles the highs and lows of mounting a Broadway revue, and how creative differences, oversized egos, and petty bickering can sabotage a surefire hit. Yet however biting its satire may be, 'The Band Wagon' earns its stripes through music, and perhaps the most famous song from the Arthur Schwartz-Howard Dietz score sums up this ebullient picture perfectly: 'That's Entertainment!'

The slight story concerns faded Hollywood star Tony Hunter (Astaire), who returns to New York at the behest of his composer friends, Lily and Lester Marton (Nanette Fabray and Oscar Levant), to star in their lighthearted new stage musical about a children's author who makes money on the side writing lurid murder mysteries. With Tony on board, the Martons hope to sell the idea to esteemed director Jeffrey Cordova (Jack Buchanan), who's known for his highbrow classical dramas, but has no experience with musical comedy. The project intrigues Cordova, but much to the Martons' chagrin, he latches onto an obscure Faustian angle in the story, and decides to build the show around it — with disastrous results. In the blink of an eye, the egomaniacal director tosses out all of the musical's humor and whimsy, and creates a somber morality play bloated with overblown special effects that in no way resembles the Martons' original. He also casts ballerina Gabrielle Gerard (Charisse) opposite Tony, and the two stars clash personally and stylistically, before their hellish experience in the theatrical trenches draws them together.

Plenty of films, from '42nd Street' to 'Summer Stock,' present a romanticized view of producing a Broadway musical. But with typical wit and insight, writers Betty Comden and Adolph Green take a more realistic tack, giving us an insider's perspective by cleverly integrating their personal experiences and those of the cast into the film. A running gag addresses Astaire's advanced age and "washed up" status as a leading man, as well as his concerns over the height of his partner and whether his hoofing abilities can measure up to her classical ballet training. Comden and Green also lampoon Oscar Levant's real-life hypochondria and pattern Lily and Lester — and their rollercoaster creative relationship — after themselves. At times, their screenplay gets a bit talky and some of the humor seems forced, but 'The Band Wagon' still charmingly conveys the frustrations, insecurities, joy, and heartache of theatrical production.

And, oh, those musical numbers! So many classic routines crammed into a single film. Astaire's two solos come early, but the reflective 'By Myself' effectively nails Tony's mood, while 'Shine on My Shoes' — set in a downtown penny arcade — oozes style, atmosphere, and energy. The well-known show business anthem, 'That's Entertainment!' (which Schwartz and Dietz reportedly wrote in a mere 30 minutes!), allows Astaire, Buchanan, Fabray, and Levant ample opportunity to clown around, but the centerpiece of 'The Band Wagon' is without question 'Dancing in the Dark.' As Gene Kelly states in 'That's Entertainment,' "This is the Astaire I love to watch. With a lovely partner like Cyd Charisse, a simple setting, a marvelous song by Howard Dietz and Arthur Schwartz — these are the only ingredients Fred would need to create a classic moment." Enchantment is more like it, for rarely has grace and elegance been more exquisitely preserved on celluloid. Every move, turn, lift, and dip is sheer perfection, as Astaire and Charisse float across an empty clearing in Central Park, falling in love with each other as we fall in love with them. Astaire's work with Ginger Rogers is undeniably brilliant, but in my book, nothing they ever did can surpass 'Dancing in the Dark.'

The film's blissful final half-hour almost totally abandons plot, as five terrific numbers transpire in rapid succession. Astaire and Buchanan's debonair soft-shoe to 'I Guess I'll Have to Change My Plan' and the hilarious 'Triplets,' in which Astaire, Fabray, and Buchanan playfully snipe at each other while dressed in baby clothes, are high points, but the dazzlingly innovative 'Girl Hunt' ballet is in a class of its own. A spoof of hard-boiled detective novels, the 12-minute "murder mystery in jazz" features an uncharacteristically macho Astaire as a tough-talking private eye who romances a wispy blonde and slinky brunette (both Charisse) while trying to solve a crime. (Astute viewers will also catch a quick glimpse of a young Julie Newmar as an alluring model.) Michael Kidd's athletic, sexy choreography and Minnelli's peerless sense of style and humor combine to create the most lively and engaging ballet MGM ever produced — and that includes 'An American in Paris.'

Astaire files one of his most relaxed and dimensional portrayals, and his dancing — even at age 54 — brims with newfound vigor and delight. Buchanan, Fabray, and especially Levant provide stellar comic support, but unfortunately, Charisse (in her first starring role after making a big splash as a seductive siren in the 'Broadway Ballet' sequence in 'Singin' in the Rain') can't compete dramatically, and her stilted acting occasionally disrupts the film's flow. Yet all is forgiven the moment she begins swaying to the strains of Schwartz's music. With supreme poise and talent, Charisse instantly mesmerizes, and partners Astaire like no other dancer. Together (along with Minnelli's superior direction), they make 'The Band Wagon' one of the all-time great musicals — a feast for the eyes, ears, and feet. 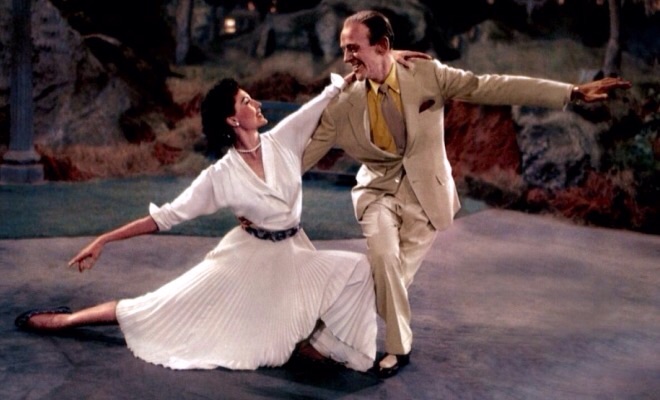 'The Band Wagon' arrives on Blu-ray packaged in a standard case. Video codec is 1080p/AVC MPEG-4 and default audio is DTS-HD Master Audio 5.1. Once the disc is inserted into the player, the static menu with music immediately pops up; no previews or promos precede it.

The 2005 DVD of 'The Band Wagon' was one of Warner Home Video's ultra-resolution efforts, so expectations ran high for this Blu-ray release. And once again, the studio knocks the ball out of the park, producing a sparklingly clear, lushly colored transfer that's a joy to watch from start to finish. Distinguished by exceptional contrast, a hint of grain, and a lustrous sheen, the 1080p/AVC MPEG-4 image truly pops, dazzling the senses and improving upon its standard-def cousin. The vibrant Technicolor hues are well saturated and lend plenty of pizzazz to subtle costume and set details. Reds and yellows are especially bold, but pastels shine as well, and background elements are marvelously crisp. Patterns and sequins resist shimmering, while inky blacks add extra depth to nighttime scenes and fleshtones remain natural and stable throughout. Best of all, not a single nick or scratch sullies the pristine source material. No noise or pixelation is present either, and any digital doctoring escapes notice. Lavish musicals deserve lavish treatments, and 'The Band Wagon' looks like a million bucks.

The DTS-HD Master Audio 5.1 track also bests its lossy DVD counterpart, producing crystal clear sound that makes this classic musical truly sing. Though surround activity is subtle and generally confined to the song and score, front channel stereo separation is quite pronounced, resulting in a wide soundscape that lends the audio an expansive, robust feel. Bright highs and weighty lows provide excitement and resonance, and a wide dynamic scale keeps distortion at bay while showcasing the swelling strings and screaming brass that distinguish the excellent orchestrations. Dialogue and song lyrics are always clear and easy to comprehend, and no age-related impferctions, such as hiss, pops, and crackles, disrupt the purity of the track. Thankfully, 'The Band Wagon' sounds as good as it looks, and musicals aficionados will enjoy cranking this superior track up.

Most, but not all, of the supplements from the 2005 DVD have been ported over to this Blu-ray release. What's missing is the Fred Astaire trailer gallery, featuring eight previews from the dancer's impressive film canon, and a deleted Cyd Charisse musical number (with dailies), 'Two-Faced Woman.' (Interestingly, that song, as well as its vocal track by India Adams, was immediately recycled into the Joan Crawford musical, 'Torch Song,' released the same year as 'The Band Wagon.') In their stead - and quite inexplicably - a vintage cartoon has been added, but I prefer extras that relate directly to the movie. This is still a stellar supplemental package, but the deletions somewhat dull its luster.

As the tagline says, "Get aboard!" 'The Band Wagon,' one of director Vincente Minnelli's best films, bowls us over with one show-stopping number after another, along with plenty of color, style, and old-fashioned fun. The sublime pairing of Fred Astaire and Cyd Charisse makes this classic musical float on air, and combined with Warner's top-notch Blu-ray presentation, which features an impeccable video transfer, lively audio, and a substantive spate of supplements, this disc earns a high and hearty recommendation.