One of Merchant Ivory's undisputed masterpieces, this adaptation of E.M. Forster's classic 1910 novel is a saga of class relations and changing times in Edwardian England. Margaret Schlegel (Emma Thompson) and her sister Helen (Helena Bonham Carter) become involved with two couples: a wealthy, conservative industrialist (Anthony Hopkins) and his wife (Vanessa Redgrave), and a working-class man (Samuel West) and his mistress (Niccola Duffet). The interwoven fates and misfortunes of these three families and the diverging trajectories of the two sisters' lives are connected to the ownership of Howards End, a beloved country home. A compelling, brilliantly acted study of one woman's struggle to maintain her ideals and integrity in the face of Edwardian society's moribund conformist values.

Although it already got a Criterion release not that long ago (2005 for DVD; 2009 for Blu-ray), the Cohen Film Collection (via Entertainment One) is planning to release a significant number of Merchant Ivory films on Blu-ray over the next few years, starting with this – a brand-new 4K restoration (although obviously only rendered in 1080p here) of 1992's 'Howards End'. This release, however, doesn't come with a little controversy – as is detailed in our Video section below – but first let's talk about the movie itself and if it still holds up after 25 years.

Based on the novel by E. M. Forster, the movie is an examination of social classes in turn-of-the-century Edwardian England. Now before you go running away, it's not quite as boring as it may sound, although by today's standards (and even by 1992 standards), 'Howards End' takes its good, old time to unravel its tale. The film focuses on the lives and interconnections between three families: the well-off Wilcoxes; the upper middle-class Schlegels; and the lower-class Basts. The title of the movie is a reference to the house/property owned by the Wilcoxes at the movie's opening, and the process by which the house changes hands during the course of the film was Forster's way of showing how he believed the class distinction that had been in England for years was fading away in favor of a more mixed society with lines less clearly drawn when it came to social status.

The movie opens with Margaret Schlegel (Oscar winner Emma Thompson) getting a letter from her younger sister Helen (Helena Bonham Carter) that she is engaged to be married to Paul Wilcox (Joseph Bennett). However, the letter seems to have been sent in haste, as it turns out that Paul isn't that interesting in being engaged to Helen after all. The Wilcoxes' temporarily take up residence near the Schlegels in London (due to the marriage of another son), which leads Margaret to strike up a friendship with the Wilcox family's matriarch, Ruth (Vanessa Redgrave). During their conversations, Margaret mentions that the Schlegels may be losing their family home soon, leading Ruth to talk about her love for Howards End. Ruth, as it turns out, has a terminal illness, and upon her death it is learned that she bequeathed Howards End to Margaret...something that the Wilcox family, obviously, refuses to believe Ruth did with a sound mind...so they burn the document without Margaret ever knowing it existed.

Ruth's now widowed husband, Henry (Anthony Hopkins, in another great performance), now feels responsible for making sure Margaret finds a place to live and strikes up a friendship with her that soon turns romantic and eventually leads to marriage between the two. Meanwhile, Helen has found herself increasingly attracted to Leonard Bast (Samuel West), a less successful clerk who the Schlegel sisters first met after Helen mistakenly took his umbrella home with her during a music lecture both she and Bast were attending.

All this could come off as really soap opera-like, but in the hands of Director James Ivory and the actors on hand here, there's a real dignity to 'Howards End' and while I personally don't think it's Merchant Ivory's best film (my vote would go to The Remains of the Day, which reunited Anthony Hopkins and Emma Thompson in very different roles), it's easy to see why it's widely considered among the Director/Producer team's best work. Even if you're not taken with the movie's story, the acting and beautiful cinematography alone make 'Howards End' worth a look.

'Howards End' goes up for sale on Blu-ray in this special 25th anniversary release from the Cohen FIlm Collection an Entertainment One. The two 50GB Blu-rays come housed inside a standard keepcase that is the same kind that Sony Pictures uses for their releases (with a flap on the side that must be lifted to open the case). The keepcase also includes a pair of inserts: one a cardboard card with the box cover image on one side and the flip side containing a list of other Merchant Ivory movies coming soon from Cohen; the other a single-fold advertisement featuring box covers of Cohen releases. The keepcase slides inside a larger cardboard slipcase, which also has room for the 25-page full-color booklet that is included in this set. Both Disc 1 and Disc 2 of this release are front-loaded with trailers for Sudden Fear, The People vs. Fritz Bauer, 'Come What May', and 'The Claude Chabrol Collection'. The main menu (on both discs) consists of a montage of footage from the movie, with menu selections across the bottom center and bottom right of the screen. Viewers are given an additional front-loaded trailer (this one for Cohen's Merchant Ivory library of releases) when they start the movie on Disc 1 or attempt to watch the first bonus feature listed on Disc 2. Yeah, kind of annoying.

Please note: the back of the slipcase for this release mistakenly states that the aspect ratio of the movie is 1.78:1 "full frame" – it's not. However, the film isn't presented in its original theatrical aspect ratio, either. For more about the controversial framing of this release, see our 'The Video: Sizing Up the Picture' section below. 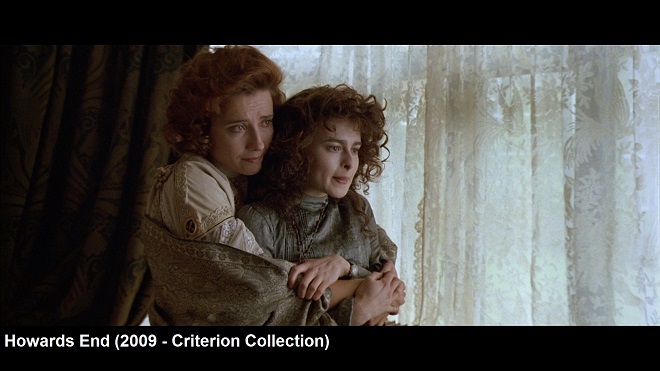 At first glance, this appears to be a beautiful restoration (which was done in 4K, although no 4K version of the movie has been announced for home video) of the movie that – according to the supplemental materials and the booklet that comes with this release – was overseen by both Director James Ivory and Cinematographer Tony Pierce-Roberts. But something was not sitting right to me about how much of my screen the black bars at the top and bottom were taking up, leading me to hit the Internet and see if my eyes were playing tricks on me. Sure enough, some other reviewers/critics had noticed the same thing and, as it turns out, the aspect ratio of this release's presentation isn't the theatrical 2.35:1 or even a slightly wider 2.39:1 or 2.40:1, but actually something closer to 2.50:1. There's nothing out there I can find from Ivory, Pierce-Roberts, or anyone else to indicate this was the desired aspect ratio for this release, and it almost certainly seems like an error on the part of Cohen and Entertainment One (as of this writing, they've offered no official statement about the ratio).

Given the odd aspect ratio, my next concern was that information would now be cut off at the top and bottom of the screen, and sure enough it is. But even more surprising is the fact that information on both the left and the right appears to be cut off as well – as you can see with our screenshots on this page that compare this new Cohen release with the former (and now out-of-print...so hang on to it if you own one) Criterion Collection Blu-ray. Again, I find it hard to believe that Ivory and Pierce-Roberts approved the framing here, particularly since they reportedly approved the former Criterion version of the film, which shows much more on-screen information on all sides.

You'll also note there's a completely different color timing for this restoration, but in this case, I actually like the less-bright, less-saturated, and less "warm" look to the movie – which results in a more film-like presentation, in my opinion. Black levels do appear to be stronger in this new version, and problems like noise (which occasionally creeped into the former Criterion version) or aliasing are virtually non-existent, although film fans will be happy to hear film grain is pleasantly apparent and consistent in almost every shot, but never to the point of being obtrusive.

Had this presentation been given the same aspect ratio/framing as prior releases (or at least close to it) or if we at least had something definitive from James Ivory saying that this is how he wants his movie to look (I wonder if anyone's even pointed out to him), it would have gotten a much higher score from me because I do think the restoration here is quite wonderful. However, given the odd ratio and framing of this release, I knocked a full point off my video score. Potential buyers will need to decide on their own if the differences are a deal-breaker when it comes to owning this release.

The featured track here is an English 5.1 DTS-HD Master Audio track that, to my ears, sounds identical to the one on the prior Criterion release – so if the track did get remastered for this version (Cohen is claiming a 5.1 remastered track...but that's possibly a reference to the lossy 5.1 Dolby Digital track), there's no significant difference between the two.

The DTS-HD track is surprisingly restrained throughout – used pretty much only to amp up composer Richard Robbins' theatrical score, and to provide some ambient background noise here and there – like the clomping of hooves by horses (although even then, it seems to be a pick and choose by the track creators and not consistent). For the most part, everything else is up front, with all of the dialogue coming from the center speaker. That said, everything is clear, with no evidence of hissing or muddiness to the presentation. Considering 'Howards End' is a dialogue-driven movie, there's no major complaints to be found here, but nothing really noteworthy about the audio, either.

In addition to the lossless 5.1 track, there's also the lossy 5.1 Dolby Digital track, as well as a 2.0 LPCM track, both in English. Subtitles are an option in English SDH. 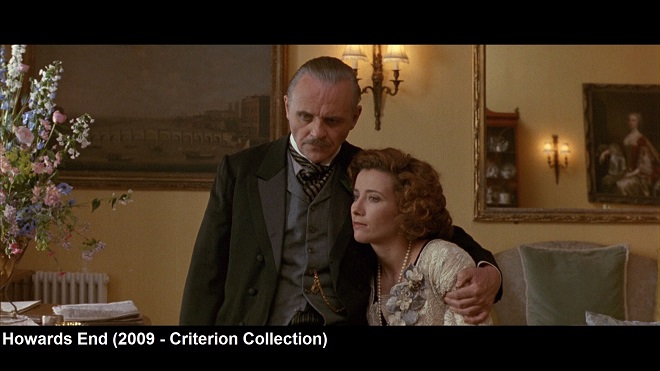 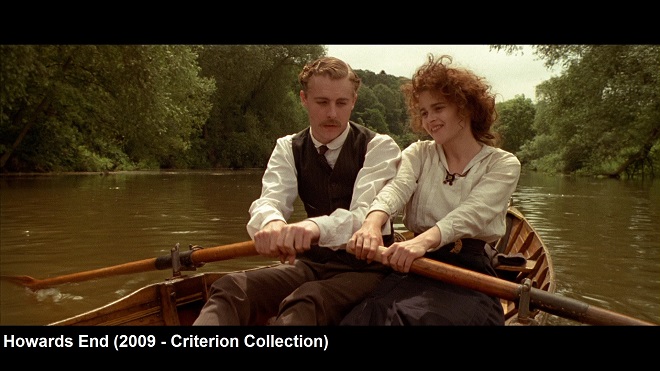 What could have been one of the best releases of the year suffers from a transfer with framing/ratio issues that potential buyers should be aware of going in. While personally I don't think the film is the best that Merchant Ivory has to offer, those who love this movie (and perhaps don't own the out-of-print Criterion release) will want to consider picking this up. Recommended, but with reservations.

Sale Price 29.99
Buy Now
3rd Party 24.99
In Stock.
See what people are saying about this story or others
See Comments in Forum
Previous Next
Pre-Orders
Tomorrow's latest releases