Margaret and Helen Schlegel (Oscar winner Emma Thompson and Helena Bonham Carter) are sisters from a well-educated European family: intelligent, free-spirited, cultured, and highly emancipated by the standards of the time. A series of events brings them into a relationship with the Wilcox family: wealthy, conservative, conventional, and very English, headed by the prosperous Henry (Anthony Hopkins) and his priggish son, Charles (James Wilby).

Both families also come into contact with Leonard Bast (Samuel West) and his wife, a couple near the lowest tier of the rigid class system. Leonard's desire for cultural and intellectual status attracts the attention of Helen, who must come to terms with her unexpected feelings toward him. At the same time, Margaret must reconcile her independent spirit with her desire for companionship and a comfortable place in Edwardian society; her moral strength is eventually able to resolve the tangle of opposites. First published in 1910, E.M Forester's Howard's End remains one of the most important English novels of the twentieth century, and Merchant Ivory Productions tour-de-force adaptation was one of the most critically acclaimed films of the 1990s, earning three Academy Awards and nine nominations, as well as being named Best Picture of 1992 by both the National Board of Review and the British Academy of Film and Television Arts.

The words 'Merchant Ivory' have become a shorthand phrase for a very specific type of movie. The phrase conjures forth images of glacially paced, lovingly rendered period pieces, which involve a fair amount of romance and even more repressed emotions. In other words, when you think of 'Merchant Ivory,' you think about the kind of movie that you have to put a doily under.

Of course, this is doing an incredible disservice to the films of producer Ismail Merchant and director James Ivory (along with regular screenwriter Ruth Prawer Jhabvala), which were often rich, highly stylized period pieces that, while occasionally overlong, had an incredible amount of wit, humor, and literacy. They are truly gifted storytellers, and while they might be a bit refined or dowdy for some viewers, their films deserve a fair amount of attention and consideration.

'Howard's End' was Merchant Ivory's third E.M. Forster adaptation (after the rapturous response to 'A Room with a View' and 'Maurice') and their best received. The story is a kind of class tragedy, with various, interweaving, turn-of-the-20th-century romantic dalliances taking center stage. Much of the movie concerns two families - the well-to-do Wilcoxes (populated by fine actors like Anthony Hopkins and Vanessa Redgrave) and the lower class, more liberal Schlegels (among them Helena Bonham Carter and Emma Thompson). At the beginning of the movie Helen Schlegel (Bonham Carter) is briefly engaged to Paul Wilcox (Joseph Bennett). The marriage is soon called off, but not before Aunt Juley (Prunella Scales) has gone to the Wilcox family home of Howard's End.

"Several Months Later," as the austere title card suggests, the Wilcoxes are in London for the marriage of another son, and are living across the street from the Schlegels. Margaret Schlegel (Thompson) begins a friendship with Wilcox matriarch Ruth (Vanessa Redgrave), in part to smooth over the events of last summer. Margaret tells Ruth that they will soon be kicked out of their family home in London. Ruth has been hiding an illness and, right before her death, writes a note that suggests that Howard's End should be left to the Schlegels.

The Wilcoxes burn the note, while, as the years progress, the Schlegels and Wilcoxes become further enmeshed, with Henry Wilcox eventually becoming engaged to Margaret. Things get a little crazier after that, but I don't want to ruin the surprises for anyone who hasn't read or seen 'Howard's End.'

As you can tell, 'Howard's End' is primarily concerned with ownership and the classes. (There's a third family, the Basts, who represented the lower class. But their story is far too complicated to get into here. Needless to say, they too weave in and out of the stories of the Victorian industrialists the Wilcoxes and the more bourgeois Schlegels.) Henry's profession involves something to do with the colonization of Africa, with the Howard's End house standing in for England as a whole. The central question of 'Howard's End' - i.e. who will get Howard's End? Is echoed as 'Who will control England?' (And more tangentially, 'Who will control the colonies?') What class will come out on top?

It's heady, heavy stuff, and at 2 and a half hours, it's a long haul, which takes on a deathly seriousness in its last act. But the deft Merchant Ivory touch is always present, and the dazzling performances (particularly by Hopkins and Thompson) do much to enliven the tale. It's just a gorgeous film and an absolutely glorious adaptation. There's a reason that it was nominated for a whole boatload of Oscars (and eventually won three - including one for Emma Thompson) and critics awards. It really is that good.

What really struck me about 'Howard's End' this time around was its bold editorial choices. There's a scene about an hour in where Margaret is out to lunch with Henry and the sequence is punctuated by fades to black, in which the screen stays black for a couple of seconds before fading back in. It's a wonderful decision, and adds a lot to the rhythm of the sequence. And it's completely ballsy. Where else would you even see something like that? The same tic is repeated later, to even greater effect.

There's another scene where the poor insurance agent Leonard Bast (Samuel West) is working in his office and suddenly we see his entire set-up, his desk etc., in the middle of a lush countryside scene. This does two things: it represents Leonard's naturalist bent (he loves the stars) and it visually suggest his wish to ascent to Howard's End.

The film is punctuated with these kind of truly wonderful moments and the movie as a whole is intoxicating. People can disparage the 'Merchant Ivory' model all they want. Movies this good can speak for themselves.

In a poll conducted earlier this year, 'Howard's End' was chosen by Amazon readers/buyers as the Criterion catalog title they'd most like to see get the high definition treatment. (Really, I cannot believe this was chosen over 'Picnic at Hanging Rock,' but anyway…) As such, the film was elevated from its status as part of the Janus Films Merchant Ivory collection to part of the actual Criterion canon, with a spine number of 488. (In the name of continuity, Criterion will reissue the regular DVD with the same spine number in February.) The 50GB disc is Region "A" locked and the packaging comes with a brand new, beautifully illustrated essay by L.A. Times film critic Kenneth Turan. Can I also mention that Criterion has the best menu screens around? Honestly - between this and 'Monsoon Wedding,' they're a special feature in their own right. 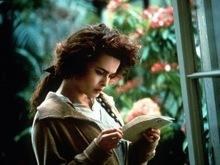 'Howard's End' is presented on Blu-ray with a MPEG-4 AVC transfer (with its original 2.39:1) that is absolutely stunning. It really does look like a million bucks.

Let me quote the booklet about the transfer: "Supervised by cinematographer Tony Pierce-Roberts and approved by director James Ivory, this high-definition transfer was created from the original 35mm negative. Thousands of instances of dirt, debris, scratches, splices, warps, jitter, and flicker were manually removed" In other words: this is a spectacular transfer indeed.

There is a fair amount of grain present throughout that never distracts but adds to the disc's filmic quality. For a transfer that required so much work, the image never seems overtly fussed over. There was a bit of noise towards the beginning of the film, but beyond that there are no glaring technical issues or scratches, dirt, or anything like that.

Flesh tones look good, black levels are deep, and both texture and detail are heightened to an insane degree. This is a film with truly breathtaking production design and it's never, ever looked as good as in this high definition release - from the grass at Howard's End to the exquisite costuming, it really is a great, glorious transfer every bit worth the Blu-ray upgrade.

There is only one option on this disc, a robust DTS-HD Master Audio 5.1 mix.

Again, let me quote from the booklet: "The soundtrack was re-mastered from at 24-bit from the 6-track magnetic soundtrack. Clicks, thumps, hiss, and hum were manually removed using ProTools HD. Crackle was attenuated."

No, 'Howard's End' does not sound like the latest big screen Hollywood blockbuster. Nor should it. There is a staggering degree of subtlety. This is a dialogue heavy film, and every spoken word is crisp and clear. There is, however, a fair amount of atmospheric heft given to the film, particularly in the scenes set in London, when stage coaches click down the cobblestone streets, or later, when the car zooms towards Howard's End.

It should also be noted that Richard Robbins' wonderful, Philip Glass-y score sounds wonderful here, as well, both booming and crystal clear.

It's a lovely mix throughout, with everything well prioritized and exceptionally clear. There is no hiss, no crackle, nothing. And again, for a track so fussed over it doesn't sound overtly scrubbed or artificial. This is just a solid track, through and through. Well done indeed.

Most of these extras previously appeared on the Janus Films Merchant Ivory edition. There is a sole feature exclusive to the Blu-ray release, and one that should remain so, even after 'Howard's End' is officially inducted into the Criterion Collection in February.

'Howard's End' is a wonderful film, and (surprise suprise) Criterion has put together another unfathomably great package. The audio and video are dynamite, and the collection of extras is truly staggering. Even if you have the DVD release of this complicated and visually lush literary adaptation, this is a worthwhile upgrade. For everyone else, it's highly recommended, even if you've never seen it before.

Sale Price 51.99
Buy Now
3rd Party 79.2
In Stock.
See what people are saying about this story or others
See Comments in Forum
Previous Next
Pre-Orders
Tomorrow's latest releases