Hailed by critics as "brilliant" (Justin Chang, Los Angeles Times), "powerful" (Brian Truitt, USA Today), "stunning" (Helen O Hara, GQ), and "gorgeous" (Stephanie Zacharek, Time), Silence tells the story of two Christian missionaries (Adam Driver and Andrew Garfield) who travel to Japan in search of their missing mentor (Liam Neeson) at a time when Christianity had been outlawed. Captured and imprisoned, both men are plunged into an odyssey that will test their faith, challenge their sanity and, perhaps, risk their very lives. Called "essential filmmaking from a modern master" (Peter Travers, Rolling Stone), Silence is "a film for the ages" (Glenn Whipp, Los Angeles Times).

"We will not abandon our hidden Christians who live in fear."

Religion has always fascinated - okay, obsessed - Martin Scorsese, and his deep personal connection to it, born from a strict Catholic upbringing, has spawned such powerful and controversial movies as The Last Temptation of Christ and Kundun. Religious overtones, symbolism, and allegories even permeate some of his mobster movies, so it's no surprise the Oscar-winning director would embrace Silence with such unabashed ardor. For decades, Scorsese worked with screenwriter Jay Cocks to adapt Shûsako Endô's devastating tale of defiance, persecution, and spiritual exploration, and though his passion for the material is strikingly evident in almost every frame of the finished film, Silence only sporadically provokes the same response in us. Deeply personal projects occasionally become engulfed by a director's encompassing immersion in them, and Silence often falls victim to that malaise.

Which isn't to say Scorsese's epic isn't a beautiful, exotic, thought-provoking, impeccably crafted, moving, and, at times, harrowing work. It's all of those things. But Silence is also incredibly slow-paced, achingly reflective, and devoid of a driving plot that's able to fuel its 160-minute running time. Scorsese is a superior artist - that's an unequivocal fact - but the gravity of his subject and the responsibility he must have felt to perfectly realize his vision seem to weigh upon him and are reflected in the movie's presentation. Like the Catholic church, there's a stiffness to Silence that's off-putting. The somber, didactic tone and methodical narrative progression often stymie the story, as does Scorsese's obsession with the potent religious themes running through it. Silence examines the nature of spirituality with a rare and unwavering intensity, and like many esoteric undertakings, pays a price for it.

In 1637, two young Portuguese Jesuit priests, Father Rodrigues (Andrew Garfield) and Father Garupe (Adam Driver), refuse to accept the news that their beloved mentor, Father Ferreira (Liam Neeson), denounced his faith and disappeared while promoting Christianity in Japan. The notion that someone so strong and devout could abandon everything he believes, even under the most horrific circumstances, is unfathomable to the two idealistic, headstrong priests, who quickly implore their superior to let them pursue the missing missionary and help the collapsing Christian cause in Japan. Permission is reluctantly granted, and the impressionable "army of two" embarks upon an arduous and dangerous odyssey into a hostile, foreign, and staggeringly complex culture.

Determined to quash Christianity and punish those who practice it, Japan's ruthless hierarchy ceaselessly attempts to root out the Christian underground and force its followers to commit korobu, an act requiring them to fall down, surrender, and give up their faith. The reign of terror ravages the country, and against this turbulent backdrop, Father Rodrigues and Father Garupe desperately scour the country in search of Christians, and seek to nurture and protect them. But Inquisitor Inoue (Issei Ogata) continually sabotages their tireless efforts, resulting in captivity and torture. Father Rodrigues beseeches God to intervene and end the suffering and strife, but his prayers yield only silence. And that silence slowly tortures Father Rodrigues and forces him to question God's love and God's will.

Based largely on historical events, Silence immerses us in the primitive atmosphere of 17th century Japan and allows us to discover the nation's customs and cultural idiosyncrasies along with the characters. It's a bit confusing at first, and the thick dialects make deciphering critical information difficult, but as the movie progresses we begin to assimilate, and soon develop a deeper understanding of the conflicts that divide the country. The scenes of Christian persecution are reminiscent of the barbarism that consumed many followers of the faith in ancient Rome (memorably depicted in the 1951 film Quo Vadis), and all are heartbreaking, disturbing, and uncomfortably graphic. Yet they instill in us tremendous sympathy and admiration for both the sacrifices so many were willing to make and their unwavering commitment to and belief in their religion.

At times, the incessant philosophical dialogue becomes wearing, but the excellent performances almost make it bearable. Garfield, when given worthy material, is unquestionably one of cinema's finest young actors, and his earnest, emotional, and vigorous portrayal of the anguished Father Rodrigues carries the film. Driver, in a much smaller role (and looking frighteningly gaunt), complements him well, as does the always magnetic Neeson as the elusive Father Ferreira. The part is little more than a cameo, but Neeson makes the most of it, making us wish he could have had more screen time.

Silence has all the hallmarks of a great film - a probing subject, acute insight, spectacular cinematography, and fine portrayals - but by transforming this intimate tale into a bloated epic, Scorsese dulls the movie's impact. More restraint and a tighter focus would make Silence stronger, more affecting, and more palatable to a wider audience. It's still an impressive film worthy of attention, but one that requires patience and endurance... qualities the characters possess in spades, but many contemporary viewers may not. 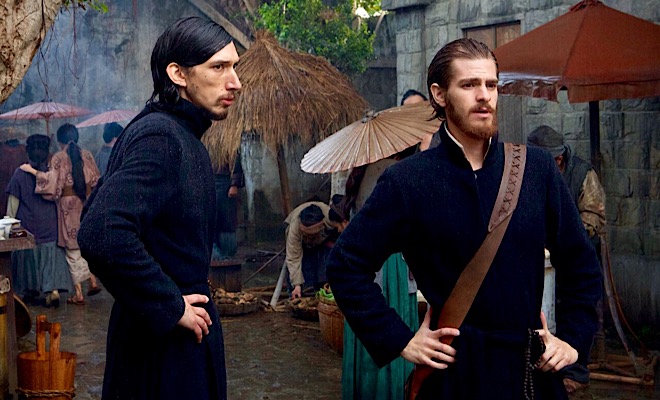 Silence arrives on Blu-ray packaged in a standard case inside a matte sleeve with raised lettering. A Digital HD redemption code is tucked inside the front cover. The video codec is 1080p/AVC MPEG-4 and default audio is DTS-HD Master Audio 5.1. Once the disc is inserted into the player, the static menu with music immediately pops up; no previews or promos precede it.

The Taiwanese locations in Silence are remote, rugged, and breathtakingly beautiful, and the 1080p/AVC MPEG-4 transfer from Paramount splendidly showcases them, as well as Rodrigo Prieto's gorgeous Oscar-nominated cinematography. Exceptional clarity and contrast distinguish the razor sharp image, which is devoid of grain and sports a lustrous sheen, while dense black levels lend it necessary weight. Colors appear natural, with lush greens often dominating the frame during exterior scenes, and excellent shadow delineation enhances dark sequences. Close-ups highlight every scraggly hair on Garfield's face, as well as the careworn creases that line the faces of the persecuted Japanese Christians, and the texture of clothing and primitive structures is marvelously distinct. Background elements are easy to discern, and no blemishes, crush, banding or other digital anomalies afflict the pristine source material.

Bottom line... Silence looks spectacular on Blu-ray, and this transfer will please even the most discriminating videophile.

The DTS-HD Master Audio 5.1 track is equally fine. Despite its classification as an epic, Silence is often, like its title implies, a quiet film, but all the subtleties are marvelously distinct, from the omnipresent crickets that frame much of the action to creaking wood, dying embers, gentle breezes, and rain showers. Surround activity isn't as frequent or palpable as one might desire, but noticeable stereo separation across the front channels helps immerse us in the exotic atmosphere. Thick native accents make some of the exchanges difficult to comprehend, but dialogue is well prioritized nonetheless. A wide dynamic scale keeps distortion at bay and heightens the impact of the intermittent music score, which sounds rich and full. And, true to form, the many moments of silence in the movie remain consistently pure. Sound isn't the star of Silence, but it's a strong supporting player, and this nuanced track maximizes its contributions.

Only a single supplement is included on the disc. It would be fascinating to have a Scorsese audio commentary so we could really get under the film's skin from the director's perspective, but no such luck.

Martin Scorsese's Journey Into Silence (HD, 24 minutes) - This elegant, reverential featurette charts the evolution of Silence from the time Scorsese first became aware of the original novel in 1988 through its realization on the screen. Scorsese, along with a number of cast and crew members, provides essential religious and historical perspective and cogent character analyses to enhance our understanding and appreciation of the story. In addition, Garfield discusses his intense preparation for his role, while Driver addresses the physically challenging aspects of the production. We also learn about the background of some of the key Japanese actors in the film, the language barriers and cultural differences that complicated the shoot, and Scorsese's deeply personal connection to the project. Lots of behind-the-scenes footage complements this stimulating and absorbing piece that's better than most featurettes of this ilk.

I'm a huge Scorsese fan, but Silence - though exceptionally well-crafted and packed with meaning and fervency - fails to excite the senses like the director's best work. The story of a dedicated priest who tries to promote Christianity and find a missing member of his brethren amid the barbarism of 17th century Japan explores many issues of faith and culture, but languorous pacing and too many soul-searching moments dull its impact. Beautiful cinematography, attuned performances, and stimulating ideas fuel the film, but without an involving plot, Silence has trouble sustaining itself over the course of its lengthy running time.

Paramount's Blu-ray presentation skimps on supplements, but features terrific video and audio transfers that immerse us in the exotic setting and historical time period. Artistry abounds in Silence, which may exude more power over the course of subsequent viewings, but as often happens with passion projects, the passion overwhelms the project and leaves the bitter aftertaste of self-indulgence. Scorsese's epic will not appeal to a wide audience, but is definitely worth a look for the director's fans and those who appreciate philosophical films.

Sale Price 14.99
Buy Now
3rd Party 3.99
In Stock.
See what people are saying about this story or others
See Comments in Forum
Previous Next
Pre-Orders
Tomorrow's latest releases