In a smog-choked city somewhere in the American Midwest, an aging criminal mastermind, newly released from prison, hatches a plan for a million-dollar jewel heist and draws a wealthy lawyer and a cherry-picked trio of outlaws into his carefully devised but inevitably doomed scheme. Anchored by an abundance of nuanced performances from a gifted ensemble—including a tight-jawed Sterling Hayden and a sultry Marilyn Monroe in her breakout role—this gritty crime classic by John Huston climaxes in a meticulously detailed anatomy of a robbery that has reverberated through the genre ever since. An uncommonly naturalistic view of a seamy underworld,The Asphalt Jungle painstakingly depicts the calm professionalism and toughness of its gangster heroes while evincing a remarkable depth of compassion for their all-too-human fragility, and it showcases a master filmmaker at the height of his powers.

"Crime is only a left-handed form of human endeavor."

Heist films have been a popular staple of Hollywood's repertoire for decades, but even the slickest of robbery capers (that means you, 'Ocean's Eleven') owes John Huston's 'The Asphalt Jungle' a substantial debt. This taut, expertly crafted adaptation of the novel by W.R. Burnett ('Little Caesar') may not be as flashy as its successors, but it's got much more meat on its bones. Packed with suspense and intrigue and distinguished by a literate script and hard-boiled tone, 'The Asphalt Jungle' is the gold standard by which other movies in a cluttered genre are judged.

And none of its gilt has chipped away in the 66 years since it first wowed both audiences and critics, many of whom couldn't believe such a down-and-dirty tale of subversive behavior came from MGM, the studio of lavish Technicolor musicals, wholesome Andy Hardy comedies, and Lassie. Yet MGM's evolution reflected an industry-wide shift toward darker, more realistic tales, and 'The Asphalt Jungle' epitomizes the trend. What makes the film so accessible is its frank depiction of an underworld that's strikingly similar to the straight-and-narrow society in which most of us reside. (It's not a coincidence the story takes place in middle America.) The criminals here look suspiciously like you and me - well dressed and well spoken, yet they play by a different set of rules and take advantage of the ones we abide by and respect. They're fascinating specimens, driven by different needs and desires. Yes, they have their respective roles - mastermind, hooligan, getaway driver, bankroller, and safecracker - but they're all complex and dimensional. The robbery unites them, but doesn't define them...just as the robbery is the central focus of this film, but may not be what we remember most about it.

Huston provides a meticulous procedural on how to pull off a difficult crime - and brilliantly examines how it all unravels afterward - but it's the haunting group of disparate characters ensnared in the narrative web who keep us coming back to this riveting yarn. Leading the list is Dix Handley (Sterling Hayden), a hulking, plain-spoken gambling addict who longs to wash off the city's filth and buy back the Kentucky horse farm his family lost during the Depression. Doll Conovan (Jean Hagen), a sweet, down-on-her-luck "clip joint" girl, recognizes his tortured spirit and unrequitedly pines for him, but he has little use for her. Soon, Dix is recruited by career criminal Doc Riedenschneider (Sam Jaffe) to take part in a lucrative jewelry heist that should pay him the money he needs to realize his dream. A mild-mannered, bespectacled European with a penchant for young girls, Doc has just been released from prison, yet he instantly dives headfirst into this new caper, which he plotted with surgical precision while behind bars.

Doc looks to Cobby (Marc Lawrence), a local bookie, to help him bankroll the project and assemble a team. Cobby enlists hunchback diner owner Gus Minissi (James Whitmore) to be the getaway driver and Louis Ciavelli (Anthony Caruso) to crack the safe. He also introduces Doc to suave businessman Alonzo Emmerich (Louis Calhern), who they hope will front them the cash to execute their scheme. Emmerich agrees, but soon admits to a confidante he's broke and needs the robbery proceeds to support his lavish lifestyle. He pledges to fence the jewels after the heist to increase the take, but secretly has no intention of sharing the wealth with his co-conspirators. Doc doesn't trust him and looks to Dix to use his brawn to keep Emmerich and his cohorts in line.

Huston juggles this rich character canvas with dexterity, and the tight-knit, Oscar-nominated screenplay, which he co-wrote with Ben Maddow, crisply delineates the various personalities, rivalries, vices, and conflicted loyalties. The measured dialogue is filled with criminal jargon, but Huston's deliberate pacing gives us time to digest and interpret it while drawing us ever deeper into the story. Harold Rosson's cinematography, which also received an Academy Award nomination, combines elements of film noir with a stark documentary style to create striking images, and the lack of a music score for the bulk of the film heightens not only tension, but also the aura of realism that swirls about the picture. Rarely does a movie satisfy so completely on both stylistic and narrative levels, but 'The Asphalt Jungle' does so with deceptive ease.

Though MGM produced many all-star pictures in the past ('Grand Hotel' and 'Dinner at Eight' chief among them), 'The Asphalt Jungle' was its first true ensemble film. Hayden and Calhern receive top billing, but neither were big stars at the time, nor were Jaffe, Whitmore, Hagen (who two short years later would make her biggest splash - and receive an Oscar nomination - as squeaky-voiced silent star Lina Lamont in 'Singin' in the Rain'), or a gorgeous young actress by the name of Marilyn Monroe, who makes a huge impression in two brief scenes as Emmerich's nubile mistress. (Much of the movie's poster art showcases Monroe to make her seem like the star, but nothing could be further from the truth.) Rosson, who was married to another blonde bombshell, Jean Harlow, 15 years before, beautifully photographs the 24-year-old Marilyn, bringing out both her innocence and allure, and under Huston's tutelage she files an affecting portrayal that belies her inexperience. 'The Asphalt Jungle' would prove to be Monroe's big break, and the actress herself cited the performance as one of her career highlights.

But as good as Monroe is, her work pales when compared to that of Hayden, Calhern, and especially Jaffe, who garnered a well-deserved Best Supporting Actor Oscar nomination for his hypnotic portrayal of Doc. (He lost to George Sanders in 'All About Eve.') Adopting a subtle German accent and underplaying to a fare-thee-well, Jaffe (perhaps best known as the noble, titular Hindu "soldier" in 'Gunga Din') steals not just the jewels, but every scene in which he appears...without even raising his voice. Calhern specialized in playing pompous rich men, but here his frayed nerves, desperation, and unctuous demeanor enhance that stereotype, lending it a captivating edginess. And in an earnest and affecting performance, Hayden mixes dumb-lug strength and cockiness with an underlying vulnerability to craft what is arguably his finest portrayal.

'The Asphalt Jungle' remains a timeless work of cinematic art. Nary a hair is out of place in this spellbinding crime drama that blends artistry with realism, brims with memorable characters, features an engrossing plot, and showcases stellar work by a tight ensemble cast. It's astounding the movie didn't receive a Best Picture Oscar nomination (the Academy - in its infinite wisdom - deemed such innocuous fare as 'Father of the Bride' and 'King Solomon's Mines' worthier productions), but at least Huston was honored with a Best Director nod. Not surprisingly, he would never make another heist film. 'The Asphalt Jungle' breaks the mold, and Huston was smart enough to realize he could never top it. And no one else ever has either. 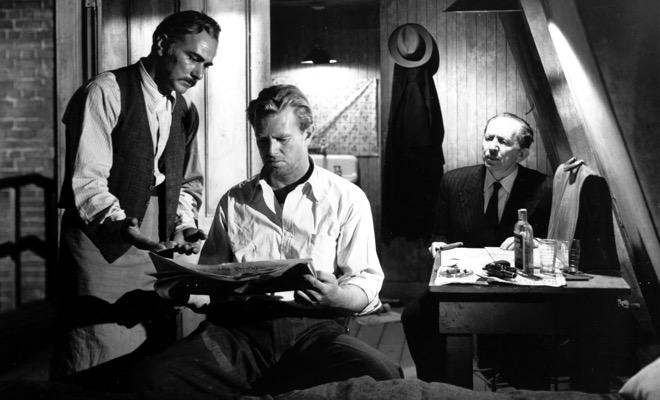 'The Asphalt Jungle' arrives on Blu-ray packaged in a standard Criterion case. A fold-out, 12-page booklet featuring an essay by author Geoffrey O'Brien, cast and crew listings, transfer notes, and tinted portraits of the ensemble cast is tucked inside the front cover. Video codec is 1080p/AVC MPEG-4 and audio is LPCM mono. Once the disc is inserted into the player, the static menu with music immediately pops up; no previews or promos precede it.

Criterion has struck a brand new digital transfer "created in 2K resolution...from a 35 mm fine-grain master positive" for this release, and classic film fans will cheer the result. Harold Rosson's Oscar-nominated cinematography, which combines the styles of film noir and naturalism, has been exceptionally rendered, thanks to superb clarity, contrast, and gray scale variance. Noticeable but never excessive grain complements the film's gritty subject matter and helps maintain a rich celluloid feel throughout, and the pristine source material is free of any age-related nicks, lines, or scratches. Blacks are deliciously inky, excellent shadow delineation highlights subtle shadings, and a fine sense of depth draws us into the criminals' claustrophobic world. Razor sharp close-ups that strikingly showcase careworn faces and Monroe's fresh-faced allure also enhance this top-notch transfer, as do crystal clear background elements and the lack of digital anomalies. The Blu-ray release of 'The Asphalt Jungle' has been a long time coming, and this terrific effort from Criterion proves we haven't waited in vain.

According to the liner notes, "the original monaural soundtrack was remastered from the 35 mm optical soundtrack positive and a 35 mm composite print." The sparse track allows us to savor the dialogue, relish silences, and absorb numerous subtleties like jangling keys, the rustling of paper, and distant police sirens. Though composer Miklos Rosza wrote the dramatic score, Huston only uses his music over the opening titles and closing scene. A wide dynamic scale gives it plenty of breathing room, and also nicely handles the highs and lows of a couple of jazzy jukebox tunes during a critical scene. Sonic accents like gunfire and a chisel chipping away at brick are crisp and distinct, and all the hard-boiled conversations are clear and easy to comprehend. Best of all, no distortion or age-related imperfections, such as hiss, pops, or crackles, intrude. This track won't knock your socks off, but it still makes a palpable impression.

All the extras from the 2004 DVD release have been ported over to this Blu-ray edition, but Criterion ups the ante with plenty of new and archival material that sheds light on the film and those who made it.

Arguably the greatest heist picture in Hollywood history, 'The Asphalt Jungle' remains a tough, probing, and riveting film more than 65 years after it first premiered. Director John Huston masterfully adapts W.R. Burnett's novel and leaves the focus where it needs to be - on the characters. The result is a rich tapestry of damaged and desperate people sewn together by an underlying aura of impending doom. Taut suspense, an engrossing story, seductive visuals, and superior performances from a stellar ensemble cast all combine to create a fascinating portrait of the underworld, and Criterion's Blu-ray presentation honors it with top-notch video and audio transfers and a potent array of absorbing supplements. Forget 'Ocean's Eleven'; 'The Asphalt Jungle' is the real deal and a must-own release for any serious film fan.

Sale Price 21.79
List Price 39.95
Buy Now
3rd Party 17
In Stock.
See what people are saying about this story or others
See Comments in Forum
Previous Next
Pre-Orders
Tomorrow's latest releases