Overview - Danny Ocean likes his chances. All he asks is that his handpicked squad of 10 grifters and cons play the game like they have nothing to lose. If all goes right, the payoff will be a fat $150 million. Divided by 11. You do the math.
OVERALL
Recommended

In 2001, indie mastermind Stephen Soderbergh was at the top of his game. He had quickly risen through the Hollywood ranks with intelligent films that challenged audiences, impressed critics, and garnered the respect of his industry peers. Even a pulpy heist flick like ‘Ocean’s 11’ stood out from the crowd, receiving rave reviews and grossing more than $450 million worldwide. For once, I don't plan to argue with that consensus. There’s nothing like watching a bunch of sure-handed, quick-witted anti-heroes develop and execute an unimaginably elaborate heist.

’Ocean’s Eleven’ introduces us to Danny Ocean (George Clooney), a criminal mastermind whose unshakably cool demeanor masks a staggering intellect. Danny has emerged from a stint in prison, obsessed with robbing three of Vegas’ top casinos at once. His target? Casino owner Terry Benedict (Andy Garcia), a ruthless businessman who stores the daily profits of all his casinos in a single, impenetrable vault. Danny assembles the best thieves in the business -- a close friend (Brad Pitt), a young upstart (Matt Damon), an old hand (Carl Reiner), a British demolitions expert (Don Cheadle), a loud-mouthed conman (Bernie Mac), and two bickering foot-soldiers (Scott Caan and Casey Affleck), among others. He even takes some time to reconnect with his ex-wife (Julia Roberts) in the midst of his heist plans.

Soderbergh’s first ‘Ocean’ film is easily the strongest of the trilogy -- it also happens to be one of my favorite films of all time. Ted Griffin’s light-footed screenplay is rife with stylish dialogue that the cast delivers with sharp tongues and cool wit. Better still, the interplay between Clooney and Pitt instantly imbues the pair with a classic sense of loyalty and friendship. The plot doesn’t even have to take time to fill in the origins of the supporting characters, because the lead performances make such minor backstories irrelevant. The tone of the ensemble's interactions suggests a long-running relationship between most of the thieves, allowing the imagination to simmer with thoughts of other jobs the crew have worked on in the past.

The script is supported by Soderbergh’s breezy direction, perfect pacing, and effortless editing. The director is a confident storyteller and there isn’t a single scene that doesn’t serve a purpose. His first act establishes everything a viewer needs to know, while introducing a pile of characters at breakneck speed -- it’s a testament to Soderbergh’s talent that each player receives plenty of attention without losing anyone in the shuffle. The second act loads everyone onto a rollercoaster as the bunch plan their heist. It’s an intricate setup, but Soderbergh keeps the robbery clear and concise (while still concealing every trick and turn from his audience). Everything collides in a thrilling final act that balances sleight of hand with humor to deliver a truly satisfying end to the tale. The climactic heist is epic and entertaining -- a stunning finale that’s as mesmerizing now as it was the first time I saw it.

How good is ‘Ocean’s Eleven?’ It sets the bar so high that its two sequels have a difficult time living up to its standards. Its tone and style may not be for everyone (as evidenced by a small but disgruntled crowd that doesn’t understand what all the fuss is about), but it’s the sort of flick I can throw in again and again. I adore the engaging screenplay, the clever performances, and Soderbergh’s whimsical take on the heist film. In the end, ‘Ocean’s Eleven’ is a true genre classic that everyone should see at least once. 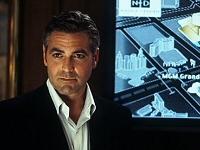 Even though it's the oldest film in the series, 'Ocean's Eleven' easily boasts the most impressive visual experience of the trilogy with its impressive 1080p/VC-1 transfer. The palette subtly changes throughout the film, but colors remain sturdy throughout, offering natural skintones and vibrant primaries. Detail is also exceptionally sharp -- clothing textures, individual strands of hair, and even the tiniest text on casino chips are crisp and lovingly rendered on screen. The entire image has a natural pop that makes the Vegas casinos look warm and inviting. Likewise, daytime exteriors offer excellent contrast, while nighttime interiors simmer with deep black levels. To be fair, the transfer doesn't have the same directorial hurdles to overcome as its 'Ocean' brethren. Aside from its noticeable grainfield, 'Eleven' doesn't suffer from the bizarre crush and coloring oddities Soderbergh used to craft the look of his sequels.

I did catch a few small bursts of artifacting, but I likely would have missed each instance if I hadn't specifically been looking for it. In fact, the only real nitpick I have with the picture quality of 'Ocean's Eleven' is that a few specks and scratches mar the print on occasion. Still, compared to the muddy standard DVD, this Blu-ray edition is an absolute godsend. Fans will be extremely pleased to see how great 'Ocean's Eleven' looks in high definition. 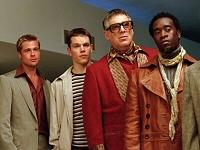 'Ocean's Eleven' features a standard Dolby Digital 5.1 surround track (640kbps) that doesn't pack a lot of punch. The film is a dialogue driven affair in which light quips dominate the central channels and push the bulk of the soundfield forward. Conversations are always crisp and well prioritized, and I never had to strain to hear the actors speak. In fact, the most exciting element of the track is 'Eleven's jazzy score, fluttering solos, and piercing riffs. Every last note of the improv-laden music dances through the soundscape -- saxophones have a satisfying growl, trumpets pack a stable punch, and the riz-at-dat of the drums sound clearer than they did on the standard DVD.

Unfortunately, the audio mix rarely takes advantage of the rear surrounds -- the busy casinos in 'Ocean's Eleven' are shoved into the background and fail to provide the same all-encompassing bings and dings of a genuine Vegas casino. Ambiance is relegated to the bottom of the soundscape and very little attention seems to have been invested in the developing the immersive properties of the track. Add to that a series of underwhelming dynamics (with a minimal LFE presence to boot) and the track quickly amounts to a mildly disappointing experience. 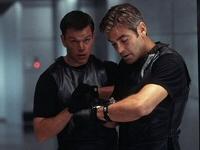 'Ocean's Eleven' includes all of the special features that originally appeared on the standard DVD. It also has the most thorough supplemental package of the trilogy, offering fans a cast commentary in addition to the filmmakers' track. The only real disappointment here is that Clooney is MIA from the proceedings. 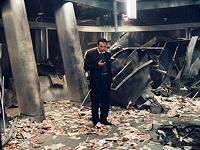 ’Ocean’s Eleven’ is a fantastic heist film in which Steven Soderbergh perfectly balances his indie sensibilities with pulpy, mainstream filmmaking. The Blu-ray edition is just as appealing. It features a fairly standard Dolby Digital audio track, a top notch video transfer, and a generous supplemental package that makes it an easy one to recommend. If you didn’t already pick up the trilogy giftset this past holiday season, take the opportunity to nab the best of the bunch with this individual release.

Sale Price 1.78
List Price 14.98
Buy Now
3rd Party 29.99
In Stock.
See what people are saying about this story or others
See Comments in Forum
Previous Next
Pre-Orders
Tomorrow's latest releases