Gil Carter (Henry Fonda) and Art Croft (Henry Morgan) ride into a town frustrated by the prevalence of cattle rustlers. Suddenly, word comes that a popular rancher has been murdered, which puts the already enraged town over the edge. When the spiteful mayor forms a posse, Gil and Croft are swept up in their mission - to seek vengeance - even upon those innocent of any wrong-doing.

As it becomes clear that blood-lust may win out over rationality, the tension mounts in this "masterpiece" (Tim Dirks' The Greatest Films) with its timeless message about the dangers of mob mentality.

Before 'The Ox-Bow Incident,' Hollywood placed the American cowboy on a pedestal and celebrated his heroic image. Sure, some bad apples made the West wild, but the majority of cinematic cowboys were depicted as courageous good guys with strong morals and admirable ideals who never hesitated to fight for truth and justice against marauding adversaries. Walter Van Tilburg Clark, however, tarnished that Dudley Do-Right persona and brought dimensionality and ambiguity to the men and women of the range when his provocative novel debuted in 1940. Clark's disturbing tale of a vengeful gang of vigilantes whose warped sense of honor and outrage clouds their judgment and leads to tragedy is regarded as a time-honored classic and searing condemnation of prejudice, arrogance, mob violence, and the abuse of power.

Thankfully, director William A. Wellman deeply respected the material, and his exceptional adaptation doesn't soften or sanitize the potent messages. A film noir disguised as a western, 'The Ox-Bow Incident' exposes audiences to the dark side of the American West, a place where suspicion, ambition, and macho sensibilities overshadow reason and righteousness. "Good" characters struggle to stand up to the inflammatory rhetoric of bloodthirsty bullies who prefer to flex their muscles and brandish their six-shooters rather than follow the letter of the law. Wellman's taut, thought-provoking film also paved the way for future substantive westerns populated by complex heroes faced with difficult moral choices, and the unspoiled landscape and primitive frontier towns proved to be fertile ground for exploring issues that tested man's basic instincts and ideals. Without 'The Ox-Bow Incident,' would we ever have had 'High Noon,' 'The Searchers,' or 'My Darling Clementine'? Tough to say.

A mere 75 minutes, 'The Ox-Bow Incident' doesn't waste a moment as it chronicles a fateful day in the lives of two cowboys, Gil Carter (Henry Fonda) and Art Croft (Henry Morgan), who amble into the Nevada town of Bridger's Wells in 1885 to look up Gil's old flame, Rose Mapen (Mary Beth Hughes). While drinking at the local saloon, they learn the area has been plagued by livestock theft, and the angry townspeople hope the rustlers will get the retribution they deserve. Almost on cue, news breaks that Larry Kinkaid, a regional rancher, has been killed and much of his herd is missing, presumably stolen by the murderers. The sheriff is out of town, so the frenzied residents form their own posse and embark on a mission to hunt down and lynch the fleeing criminals.

To prove their innocence, Gil and Art reluctantly tag along, as does old man Davies (Harry Davenport), who vociferously objects to such barbaric madness and hopes to quell the rabid attitudes fueling the crazed gang. When the posse comes upon a trio of men (Dana Andrews, Anthony Quinn, and Francis Ford) traveling with a herd of cattle, they immediately assume they're the outlaws and charge them with the crime, despite their passionate - and reasonable - arguments of innocence. (They don't deny the cattle come from Kinkaid, but claim to have bought them out on the range, which is why they don't have a formal bill of sale.) A hasty hanging is scheduled at dawn, but will clearer heads convince the implacable posse to follow appropriate legal procedures or will the group execute their own twisted brand of "justice"?

Clark wrote 'The Ox-Bow Incident' to raise awareness about the atrocities inflicted upon innocent men by dictators like Hitler and Mussolini, and suggest how easy it might be for such a frightening figure to rise to power in America. He chillingly depicts how a rush to judgment and lack of due process coupled with bigotry, arrogance, and a shameless disregard for basic human rights can threaten the foundation of our civilization. The loudest voice in the room, Clark tells us, isn't necessarily the smartest (it may well be the most dangerous), and in this election season, that message, communicated with eloquence and power in Lamar Trotti's screenplay, acquires a greater degree of resonance and relevance.

Though shot largely on studio soundstages due to severe budget constraints, 'The Ox-Bow Incident' still exudes an outdoorsy feel, yet a tense sense of claustrophobia and desperation predominates. All the characters are trapped, either by the mob or their own rash philosophies and choices, and Wellman expertly balances economy and artistry to drive home the film's finer points. Trotti's script may favor talk over action, but the words are so important we don't care. With marvelous acuity, Trotti dissects mob psychology and shows how difficult it is to stand up for what's right in the face of blistering adversity, pressure, and derision.

Fonda always cited 'The Ox-Bow Incident' as one of his favorite films, and the quiet, forthright character he portrays snugly fits his persona and mirrors a similar voice-of-reason role he would portray a decade-and-a-half later in '12 Angry Men.' Measured, earnest, and deceptively tough, Fonda is completely believable, and his final speech rivals his iconic "I'll be there" monologue in 'The Grapes of Wrath.' All the other actors are impeccably cast and create a tight ensemble, but Andrews especially shines as the tortured family man whose life is turned upside-down in the blink of an eye when he's viciously targeted by the mob.

'The Ox-Box Incident' holds the distinction of being the last film to be nominated for Best Picture - and nothing else - in Academy Awards history. Though Wellman's lean direction, Trotti's script, the cinematography of Arthur Miller, and a couple of supporting performances all deserved Oscar nods, the movie was shut out of all the other categories. Yet such exclusion doesn't diminish the meaning and impact of this superior motion picture that forces us to confront the deficiencies in society - and ourselves - that cultivate ignorance, violence, and hate. 'The Ox-Bow Incident' is a bleak and devastating film, but its importance cannot be overstated. 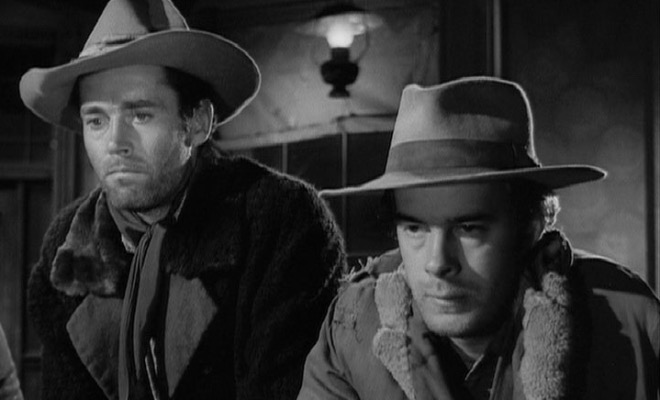 'The Ox-Bow Incident' arrives on Blu-ray packaged in a standard case. Video codec is 1080p/AVC MPEG-4 and audio is DTS-HD Master Audio 1.0. Once the disc is inserted into the player, the static menu without music immediately pops up; no previews or promos precede it.

Newly remastered in 4K, 'The Ox-Bow Incident' comes to brilliant life in this crisp, clean 1080p/AVC MPEG-4 transfer. A lovely grain structure preserves the film-like feel and provides essential texture for the gritty story, while excellent gray scale variance heightens detail levels. Blacks are rich and deep, shadow delineation is quite good, and no age-related nicks, marks, or scratches intrude. (There is, however, a missing frame at the 20:35 mark.) The contrast between the day and night scenes is quite striking, and sharp close-ups highlight all the angst and anguish on the characters' faces. No crush, noise, or other digital issues are present, and any digital doctoring is seamlessly integrated into the whole. Though the soundstage exteriors appear more obvious due to the enhanced clarity, this is still a natural-looking transfer that serves the film's powerful narrative quite well. Those who own the previous DVD will be quite pleased with this top-notch effort and shouldn't hesitate to upgrade.

The DTS-HD Master Audio 2.0 mono track supplies clear, well-modulated sound. Due to the film's low budget, many exteriors were shot indoors on soundstages, and the high-quality audio slightly amplifies the resulting hollow tones (and, in turn, our awareness of the artificial set), but that's the only imperfection on this otherwise pristine track. A wide dynamic scale keeps distortion at bay, and no age-related imperfections, such as hiss, pops, and crackles, muck up the mix. Dialogue is always easy to understand, and Cyril Mockridge's rousing music score fills the room with ease. Crowd noise, horse hooves, and gunfire are also crisp and distinct, and help fully immerse us in this meaningful drama.

All the extras from the 2003 Fox Studio Classics DVD have been ported over to this Blu-ray release.

Sale Price 19.19
List Price 29.95
Buy Now
3rd Party 17.2
In Stock.
See what people are saying about this story or others
See Comments in Forum
Previous Next
Pre-Orders
Tomorrow's latest releases