After World War II, an American GI is kidnapped by Soviets who hope to exchange him for two ex-Nazi's hiding in West Berlin.

Throughout his long and distinguished career, Gregory Peck portrayed countless heroic figures who often - to quote Theodore Roosevelt - spoke softly yet carried a big stick. His most famous characterization, the stoic, forthright attorney Atticus Finch in To Kill a Mockingbird, defines that persona, but in Night People, one of his relatively minor movies, Peck gets a rare chance to blow his stack. And he makes the most of it.

As Lt. Colonel Steve Van Dyke, a gruff, pugnacious officer stationed in Berlin during the early days of the Cold War, Peck barks orders at his underlings, vociferously chastises their incompetence, and confronts adversaries with vigorous diatribes. It's a meaty role and the actor hungrily sinks his teeth into it. Such enthusiasm certainly enhances writer-director Nunnally Johnson's cloak-and-dagger tale about the abduction of a young GI by Russian operatives and how the American government plans to gain his freedom. Packed with twists - some of which work and some of which seem contrived - Night People zips along, but often the lovely Berlin locations and expansive allure of early CinemaScope eclipse the rather pedestrian story.

A trio of Russian thugs ambushes Corporal John Leatherby (Ted Avery) as he walks along Berlin's deserted streets after kissing his German girlfriend goodnight. Stuffed into a getaway car by these stealthy "night people" and shepherded across Checkpoint Charlie into Communist territory, Corporal Leatherby instantly becomes a bargaining chip in a high-stakes prisoner exchange spearheaded by bitter Russians seeking revenge for acts of betrayal during World War II. Leatherby's father, Charles (Broderick Crawford), a blustery, vulgar tycoon from Akron, Ohio, hops the first plane to Germany and quickly locks horns with Van Dyke over the government's plan to rescue his son. A bit reminiscent of Donald Trump with his "I alone can fix it" attitude, disregard for proper procedure, and willingness to use his considerable wealth to get what he wants, the senior Leatherby doesn't care what happens to any other pawns in this risky cat-and-mouse game as long as he gets his boy back. Charles may be a loud-mouth big shot in the axle grease industry, but he has a tough time greasing the wheels of American bureaucracy and browbeating Van Dyke, who refuses to kowtow to his demands and remains determined to proceed as he sees fit.

That means tapping his local network of undercover spies, namely Frau "Hoffy" Hoffmeier (Anita Björk), a former flame with Russian contacts, who learns the Russians would be willing to swap Corporal Leatherby for an elderly German couple who valiantly stood up against the Nazis and have the scars to prove it. Charles supports the trade, but Van Dyke, who recognizes the human cost of such a deal, hopes to finesse the situation and protect all involved. Yet circumstances conspire against him, and as events unfold and truths are revealed, the rescue of Corporal Leatherby becomes ever more dicey and uncertain.

Night People was shot almost entirely on location in Berlin, which lends this tense yarn a welcome authenticity that helps gloss over some of the far-fetched plot developments. Color photography and the still fledgling CinemaScope process also heighten realism and help immerse us in the action, yet despite all the bells and whistles, Night People struggles to distinguish itself from similarly themed films. Veteran screenwriter Johnson, who received an Oscar nomination for his adaptation of The Grapes of Wrath 14 years earlier, makes his directorial debut here, and though his work is competent, it lacks panache. Johnson seems to rely more on his dialogue to tell the story than interesting visuals, resulting in a rather static, talky presentation that diminishes the impact of the film's thriller elements.

Peck's lively portrayal carries the movie (he reportedly enjoyed the change-of-pace role), and his sparring with the equally spirited Crawford is fun to watch. In supporting roles, the lanky Buddy Ebsen supplies some light-hearted moments as Van Dyke's right-hand man, while the usually boisterous Walter Abel files a surprisingly sober performance as a military doctor. Jill Esmond, perhaps best known as Laurence Olivier's first wife (before he left her for Vivien Leigh), also turns up briefly as the aged German woman caught in the web of the negotiations surrounding Corporal Leatherby's release.

In the large realm of Cold War thrillers, Night People is a minor entry (even some of Peck's diehard fans may never have heard of it), but its involving story and solid performances lend it merit. The film may lack the expected nail-biting tension, but more often than not it hits its marks and remains an entertaining exercise in international intrigue. 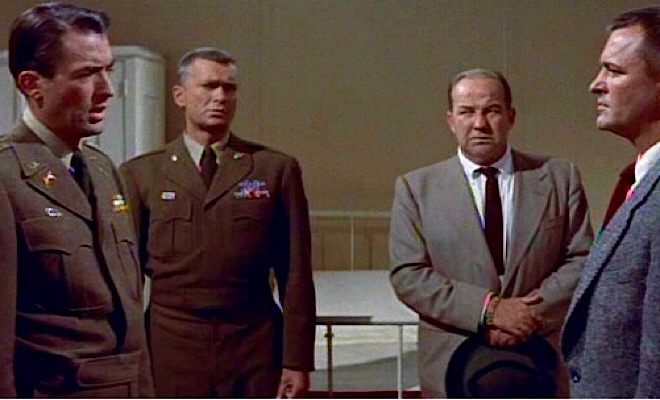 Night People arrives on Blu-ray packaged in a standard case. Video codec is 1080p/AVC MPEG-4 and audio is DTS-HD Master Audio 2.0. Once the disc is inserted into the player, the static menu with music immediately pops up; no previews or promos precede it.

This early CinemaScope film makes full use of the expanded screen real estate, often placing two characters at the fringes of various shots to emphasize the width of the new format. And for the first time on home video, Night People is presented in the manner in which it was meant to be seen, in part due to a new 4K restoration. The previous DVD release featured a visually frustrating pan-and-scan transfer, but Kino Lorber rectifies that egregious error with a clean and vibrant 1080p/AVC MPEG-4 rendering that showcases the Berlin locations and honors Charles G. Clarke's fluid cinematography. Yes, there's some distortion at the edges of the frame, but such imbalance was common in early CinemaScope pictures (future lens refinements would correct the problem) and it's not terribly noticeable here. Grain levels occasionally fluctuate, but most of the time the texture is well balanced, lending the transfer a lovely film-like feel. Bright colors, especially deep blues, supply some necessary pop, and rich blacks nicely anchor the image. Excellent contrast and clarity bring out fine details, solid shadow delineation keeps crush largely at bay, and sharp close-ups highlight Peck's chiseled facial features. Only a few errant nicks and marks dot the high-quality source material, and any digital doctoring escapes notice. Those who have pined for an authentic treatment of Night People should be thrilled with this stellar presentation.

Night People boasted one of the earliest stereophonic soundtracks, and the DTS-HD Master Audio 2.0 track maximizes its impact. Though separation across the front channels isn't especially palpable, there's enough of it to complement the widescreen visuals and sufficiently open up the action. A sufficient dynamic scale handles all the highs and lows of Cyril Mockridge's music score, which fills the room without overwhelming the narrative, and all the dialogue is well prioritized, clear, and comprehendible. Nuance is a bit lacking, but no age-related imperfections like hiss, pops, or crackles intrude. As robust as the film's main character, this track handles its chores well without calling too much attention to itself.

The film's original theatrical trailer (HD, 3 minutes), which heralds Peck's first CinemaScope picture and interestingly includes no clips - just illustrated scene stills - is ported over from the DVD release. Kino also includes previews for seven other Peck movies in its Blu-ray catalogue - The Paradine Case, The Big Country, Billy Two Hats, Yellow Sky, On the Beach, Duel in the Sun, and David and Bathsheba.

Night People will never be regarded as one of Gregory Peck's best films, but this taut exercise in Cold War intrigue provides the actor with a welcome change-of-pace role and a topical story that juggles its numerous twists with dexterity. Extras are a bit lacking, but Kino Lorber's Blu-ray presentation honors the movie's roots with a nicely restored widescreen transfer that showcases early CinemaScope and a clean, well-modulated stereo audio track. Though Night People may not warrant repeat viewings, it's still definitely worth a look for Peck fans, history buffs, and those who appreciate early 1950s fare.

Sale Price 18.93
List Price 29.95
Buy Now
3rd Party 14.99
In Stock.
See what people are saying about this story or others
See Comments in Forum
Previous Next
Pre-Orders
Tomorrow's latest releases