Towards the end of the 50s and into the 60s, the Western underwent a fundamental shift. During the classic era, bad guys were bad, good guys were good, and there was very little grey area in the characters. Then came the "Revisionist Westerns." These were movies that broke the mythological cowboys and Indians, good guys versus the bad guys dynamic. All of a sudden you didn't know who the true bad guys were anymore. With 1973's 'Billy Two Hats,' the Revisionist Western movement is in full swing, and yet, at the same time it maintains the classical sense of right and wrong and how a man conducts himself with respect and honor in the dangerous wild west, regardless what side of the law he may hitch his post.

The bank robbery was supposed to go smoothly, a quick smash and grab sort of job for $500 in gold coins, only nothing went according to plan. After Irish thief Arch Deans (Gregory Peck) was forced to shoot a man to protect his partner the half-breed Billy Two Hats (Desi Arnaz Jr.), the two men and their other partner are being hunted down by the eagle-eyed Sherif Henry Gifford (Jack Warden). There is no place in the territory that Gifford won't go to ensure the men are brought to justice.

After Gifford catches up to the gang, he plugs their partner and takes Billy prisoner, putting Arch on the run. All the common sense in the world tells Gifford that Arch is in the weeds and won't be showing his face anytime soon. But it isn't long after Gifford returns to town that Arch shows up to free his companion, shooting the Sheriff in the arm in the process. For the life of him, Gifford can't figure why a man would come to rescue his partner, especially a half-breed like Billy.

After the two ride off together, Gifford with the help of the general store owner Copeland (David Huddleston) and his old buffalo rifle manage to kill one of their horses injuring Arch. Now with one man wounded and two men on a single horse, all Gifford has to do is heal up enough so he can ride out after them. With Arch's leg broken, escape seems all but impossible on a single horse, that is until they meet Mr. Spencer (John Pearce) and his beautiful young wife Esther (Sian Barbara Allen). With a pack of rogue Apaches ahead of them and the tenacious Gifford behind them, Arch and Billy will have to figure out a way to get the help Arch needs for his leg, while also finding a way to clear their way to safety and freedom. 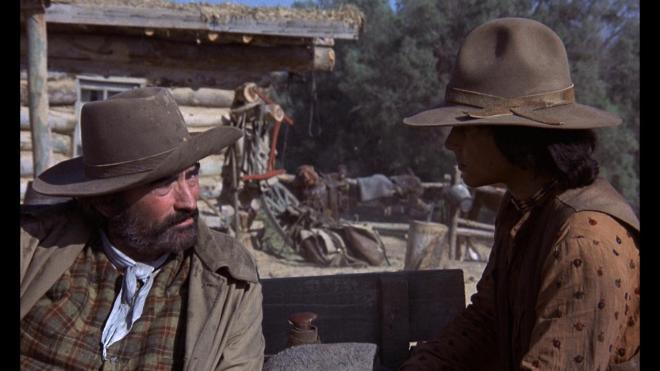 'Billy Two Hats' is a fascinating character study of loyalty, honor, and respect. You have a criminal like Arch who only dreams of one day returning to Ireland, or at least some place with green, who made a bad shot attempting to wound a man and now both he and his partner Billy are facing a noose. While he may be a bank robber and an unintended killer, Arch is at least decent enough to face up to his own responsibilities. Billy was there to just mind the horses, that's not a hanging offense, yet Gifford won't believe him. Gifford, in his singular vision of justice, can't see the angles and becomes a bad guy in his own right. He's so driven that he ends up ostracizing his only friends because he has no true sense of honor or loyalty.

Even though Gregory Peck headlines this show, Desi Arnaz Jr. is the real star as the titular 'Billy Two Hats.' He wonderfully plays a man of two worlds who is having an extra hard time finding his place or where he belongs. Through the chance meeting of Esther, he finally sees a path forward and their interplay together is fantastic. Gregory Peck does what he always does best and makes Arch come off as a relatable and likable character - even if his Irish lilt is a bit goofy-sounding at times. Peck was always an actor who commanded respect and that presence is in full force here. Part of what makes this movie a wonderful watch is the interplay between Peck and Arnaz Jr. Peck may have been the Oscar-winning veteran, but he never once tries to outshine his costar. Aiding to their performances is this sense of their characters' relationship. While Billy never knew his father, there is this feeling that Arch could well be the man in question. If he isn't, he at least expresses a wonderful sense of parental responsibility that leads to many tender exchanges between the two.

Under the direction of Ted Kotcheff of 'First Blood' fame and written by Alan Sharp, 'Billy Two Hats' is a classic Western with a revisionist twist to it. Light on action, it features more than a few solid gun fights and enough drama to make the film a fine entry in the Western genre. This was a movie where I wasn't expecting much from it and was pleasantly surprised at every turn. If you're new to the film, it's certainly worth a watch and if you're a fan - it's certainly worth watching again and again.

'Billy Two Hats' makes its Blu-ray debut thanks to Kino Lorber through their Studio Classics line. Pressed onto a Region A locked BD25 disc and is housed in a standard case. Like other Studio Classics releases, the disc opens directly to the main menu.

Considering the 42-year age of 'Billy Two Hats,' I was absolutely blown away by beautifully detailed and richly colored 1.66:1 1080p transfer this Blu-ray disc offers. With film grain nicely retained, fine details are an absolute delight throughout the run of the film. From close up shots that give you the full breadth of Jack Warden's scruffy appearance to Gregory Peck's ragged vagabond, you're able to see all of the fine facial features and costuming details to glorious effect. This transfer also makes amazing use of the vast Israeli landscapes where this film was shot offering a similar look to Westerns of old and yet offers up something new to see. Colors are perfectly balanced offering plenty of primary pop through the sandy hues and the tan colored terrain. Flesh tones are also rock solid without any particular actor looking too pale or pink. Black levels are in fine shape all around providing plenty of shadow separation to give a nice sense of three-dimensional depth to the image with only slight instances of crush. With print damage virtually non-existent this is a near perfect transfer. The only thing bringing this score back slightly are the few day for night shots that look a little rougher where detail levels can get lost and the film loses some sense of depth. Thankfully, there are only a couple moments like that.

Kino Lorber has given 'Billy Two Hats' an amazing DTS-HD MA 2.0 track. Part of the fun of this track comes from what you don't hear. Because of the pacing and contemplative nature of the film, some of the best aspects of this audio track are when this film is keeping things quiet. The scene where David Huddleston lines up his shot with the buffalo rifle is fantastic because aside from some ambient sound effects, there is virtually no other sounds until that hammer clicks and that gun bursts to life. As much of the film is very conversational, dialogue is kept front and center and comes through with terrific clarity. The score by John Scott. the dialogue and sound effect elements have plenty of space giving the film a wonderful sense of imaging between the stereo channels. This track keeps to the midranges with only occasional spikes - like when the buffalo gun fires - and is free from any distorting effects. Levels are perfectly balanced and you shouldn't have to monitor your volume. Free of any hissing, pops, scratches, or dropouts, this is a fantastic audio track for a fine film.

Interview With Director Ted Kotcheff: (HD 11:28) A recent interview with the director - I wish this had been longer because Ted provides so much fascinating information in just under 12 minutes. This is a fascinating look at what went into the movie. It's fairly spoiler-riddled so watch after you've seen the movie.

Billy Two Hats Trailer: (SD 3:59) A solid trailer that does a great job setting up the movie, but perhaps gives away a bit too much of the flick.

Moby Dick Trailer: (HD 3:13) The trailer is in a little rough shape, the color timing is a tad off, but still a very effective trailer for this classic - does its inclusion mean this could be coming to Blu-ray? We can only hope so!

On The Beach Trailer: (HD 4:46) This is an interesting trailer for a movie that had a then unprecedented 6 continent release. It plays more like a news reel talking about how the crowds and foreign dignitaries that went to see the film and loved it.

I love a good Western and 'Billy Two Hats' is a fine piece of filmmaking with a strong story and a rich cast. It's a movie that nails pacing, it's conversational without being boring, and it has the right amount of action without becoming repetitive. Kino has done a pretty great job bringing 'Billy Two Hats' to Blu-ray. The disc sports an incredible A/V presentation and a couple decent extra features. If you love westerns, consider this one highly recommended.

Sale Price 21.49
List Price 29.95
Buy Now
3rd Party 18.38
In Stock.
See what people are saying about this story or others
See Comments in Forum
Previous Next
Pre-Orders
Tomorrow's latest releases