A Biblical tale of love, tragedy, loss and redemption.

Gregory Peck stars in this gripping retelling of the beloved Old Testament story. Although he has killed Goliath and prevailed in countless battles, there is one that Israel's King David (Peck) cannot vanquish: love. Smitten with the beautiful Bathsheba (Susan Hayward), David sends her soldier husband, Uriah (Kieron Moore), into a hopeless battle, setting into motion his own downward spiral.

Neglecting kingdom and faith, David incurs the wrath of God, the destruction of his country and the ill will of his people, who expect Bathsheba to pay the ultimate price for adultery. Gorgeously filmed, rapturously acted and deeply moving David And Bathsheba's tale of romantic obsession is as beautiful as it is timeless.

"She has brought the wrath of God upon Israel."

Biblical films were all the rage during the 1920s, but fell out of favor until Cecil B. DeMille revived the genre with 'Samson and Delilah,' a classic saga of temptation and betrayal that would become the highest-grossing movie of 1949. Eager to duplicate that staggering success, other Hollywood studios jumped on the religious band wagon, mounting opulent, grandiose epics designed to thrill the senses and lure mammoth crowds. 'Quo Vadis' (the top box office draw of 1951) was MGM's answer to DeMille's blockbuster, and 'David and Bathsheba,' also a huge moneymaker, arrived the same year from 20th Century-Fox. More intimate - and far less exciting - than either of its predecessors, Henry King's labored love story focuses more on character than spectacle, and the result is a thoughtful but largely inert drama that tries harder to inspire its audience than entertain it.

Unfortunately, the film often fails to do either. Screenwriter Philip Dunne, who received an Oscar nomination for his poetic script, adapted the tale from the Second Book of Samuel in the Old Testament, but omits some key details that would make the story more palatable. While he incisively depicts the moral crisis that afflicts King David (Gregory Peck) over his adulterous affair with the ravishing Bathsheba (Susan Hayward), Dunne - unlike the Bible - doesn't satisfactorily resolve his issues of guilt. Such ambiguity might appeal to some viewers, but others might not find the spiritual nourishment and intellectual closure they crave.

We all know the diminuitive David knocked off big bad Goliath (played here by six-foot-eight-inch Lithuanian wrestler Walter Talun) when he was just an impressionable lad, but the movie saves that monumental event until its closing minutes, preferring instead to analyze the tortured psyche of the adult David, now the king of the Jews, who has become a bit of a pompous ass. Though his absolute power has not corrupted him absolutely, it has inflated his ego and tarnished his principles. One day, while getting some air on his palace balcony, he espies the lovely Bathsheba bathing on a terrace below, and is instantly smitten. He summons her to dine with him, and before anyone can take a bite, the two confess their mutual attraction and embark on a lusty affair. David forsakes his bitter wife (Jayne Meadows) and Bathsheba willingly cheats on her warrior husband, Uriah (Kieron Moore), whom she has only seen for six days oover the course of their eight-month marriage.

All goes swimmingly for the lovers until Bathsheba discovers she's pregnant. Fearing she will be stoned to death if it's discovered she's an adulterer, David brings Uriah home, hoping he will sleep with Bathsheba so they can pass the baby off as his. But when Uriah refuses to break a solemn vow that prohibits a soldier from cohabiting with a woman - even his wife - while on duty, David pursues a more drastic solution that ultimately incites scandal, drought, and famine, all of which rock David's faith to its core and put Bathsheba in dire jeopardy.

One might think director King would pack 'David and Bathsheba' with passionate embraces and suggestive encounters galore, but even despite the constraints of Hollywood's rigid production code, which prohibited gratuitous and lascivious displays of affection, the relationship between the titular characters never raises the blood pressure. Bathsheba is not a temptress like Delilah or Salome, so there's no steamy seduction scene, and their expressions of love seem more clinical than emotional, leading the audience to wonder what all the fuss is about. Yes, there's lots of guilty hand-wringing and the prophet Nathan (marvelously played by the great Raymond Massey) delivers all sorts of ominous warnings in a booming voice, but all the sound and fury doesn't produce much of a payoff.

David mopes around most of the time and Bathsheba is more ornament than participant, a fact that displeased Hayward no end. ("Well, I'm not counting on any Oscar nominations this year," she reportedly quipped to Fox studio chief Darryl F. Zanuck in a moment of frustration.) She and Peck look good together, but their lukewarm chemistry and formal, overly earnest line-readings hardly help us invest any emotional capital in their illicit relationship. And without any battle sequences or massive set pieces, there's little to sustain viewer interest over the course of almost two hours. The film picks up steam toward the end, but the jarring eleventh-hour flashback to David's juvenile exploits sucks any wind out of the story's sails.

A subplot involving the Ark of the Covenant adds a bit of welcome tension to the proceedings, but can't jumpstart this slow, methodical motion picture. 'David and Bathsheba' may have been the fifth most popular movie of 1951, helped fuel the biblical renaissance that would spawn similar epics like 'The Robe' and remakes of 'The Ten Commandments' and 'Ben-Hur,' and nabbed five Oscar nominations (for writing, cinematography, art direction-set decoration, costume design, and music score), but it's little more than a beautiful, well-meaning bore today. 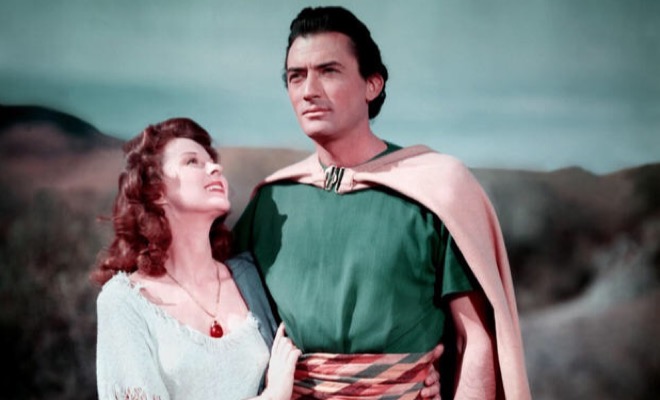 'David and Bathsheba' arrives on Blu-ray packaged in a standard case. Video codec is 1080p/AVC MPEG-4 and audio is DTS-HD Master Audio 2.0 stereo. Once the disc is inserted into the player, the static menu with music immediately pops up; no previews or promos precede it.

Spectacle is a hallmark of Biblical epics, and the 1080p/AVC MPEG-4 transfer from Kino Lorber renders it vividly. Though colors are a bit faded, the image still sports a pleasing lushness, especially when the camera focuses on Peck's rugged, chiseled features and Hayward's beautiful face and auburn tresses. Grain is surprisingly faint, but enough texture remains to lend the picture a lovely film-like feel, and nary a nick or scratch sullies the pristine source material. Black levels are rich, shadow delineation is quite good (crush is never an issue), background elements are easy to discern, and flesh tones - from Peck's olive skin to Hayward's alabaster complexion - remain natural and stable throughout. No digital defects could be detected, and any enhancements escape notice. More depth of color would have raised the transfer's score, but this is still a solid presentation of, sadly, a mediocre film.

The DTS-HD Master Audio 2.0 track flaunts a hint of stereo that slightly widens the soundscape and adds a bit of welcome nuance. I don't believe this is a true two-channel track, but I could detect some mild separation here and there that helped enhance the drama and make it more immersive. Though clear and largely well modulated, the audio exudes a robust tone that suits the subject matter, but some surface noise occasionally intrudes. Gentle breezes waft delicately across the front speakers, but more potent elements, like a driving wind storm, the baa-baa-baa-ing of a flock of sheep, and tambourine accents are crisp and distinct. All the dialogue is easy to comprehend, and Alfred Newman's bombastic, Oscar-nominated music score fills the room with ease. Though a tad clunky, this track nevertheless delivers the goods and serves rthe film well.

'David and Bathsheba' promises unbridled passion and titillating lust as it chronicles one of the Bible's most notorious forbidden romances,  but it's really pretty tepid. Henry King's preachy, plodding epic commits more than its share of cinematic sins, but none more egregious than boredom, despite impressive production values and Gregory Peck and Susan Hayward in the leading roles. Kino Lorber's Blu-ray presentation only includes a couple of minor extras, but good-quality video and audio transfers at least pique the senses while the brain struggles to remain engaged. As Biblical epics go, this one never really makes the grade, and will only appeal to fans of the genre and Peck and Hayward devotees.

Sale Price 19.71
List Price 29.95
Buy Now
3rd Party 14.73
In Stock.
See what people are saying about this story or others
See Comments in Forum
Previous Next
Pre-Orders
Tomorrow's latest releases