The supernatural thriller brings to the screen another real case from the files of renowned demonologists Ed and Lorraine Warren. Reprising their roles, Oscar nominee Vera Farmiga and Patrick Wilson star as Lorraine and Ed Warren, who, in one of their most terrifying paranormal investigations, travel to north London to help a single mother raising four children alone in a house plagued by malicious spirits.

James Wan, who has set the world of horror cinema ablaze for the last few years, returns to helm 'The Conjuring 2,' a direct follow-up to his biggest box-office hit to date. Well, unless we take into account he also drove last year's 'Furious 7' to juggernaut success. But does that really count since the franchise was already riding the money-making gravy train due to an established loyal fan base? I think not. As with the 'Saw' and 'Insidious' movies, 'The Conjuring' series is his own creation, his thriving baby with huge profit margins. And this franchise, in particular, has proven quite lucrative with spin-offs, like 'Annabelle' and its sequel, delivering some satisfying frights. So, it's no surprise New Line Cinema has signed the director to a long-term deal overseeing every aspect of the franchise, including another spin-off called 'The Nun' branching off from this sequel. Wan is also directing 'Aquaman' while attached as producer to other projects, such as the 'Mortal Kombat' reboot and MacGyver's return to television this fall. If he continues this sort of success, I almost half expect to see the title card "James Wan presents" at the start of many features.

If it seems as though I'm somewhat slow on sharing my direct thoughts about the sequel, it's because I am. Partially. That's not meant to imply it's a bad movie, which picks up six years after the events of the first. On the whole, it's a competent follow-up, picking up at the tail-end of the Warrens' most famous documented case at the Amityville house, an experience that left Lorraine (an adequate Vera Farmiga) fearing the life of her husband Ed (a much more likable Patrick Wilson). Meanwhile, across the Atlantic in the north London boroughs of Enfield, the Hodgson family is being terrorized by a malevolent spirit targeting middle child Janet (a giftedly convincing Madison Wolfe). And once again, Wan and his team deliver several hair-raising scares, switching back and forth between both continents. The children's single mother Peggy (Frances O'Connor) struggles to make sense of furniture moving on its own, mysterious noises echoing in other parts of the house and the creepy voice of a 70-year-old coming out of Janet. Lorraine is also tormented by visions of a terrifying creature with glowing eyes and dressed in a nun outfit — an inhuman presence unnerving enough to earn its own movie. 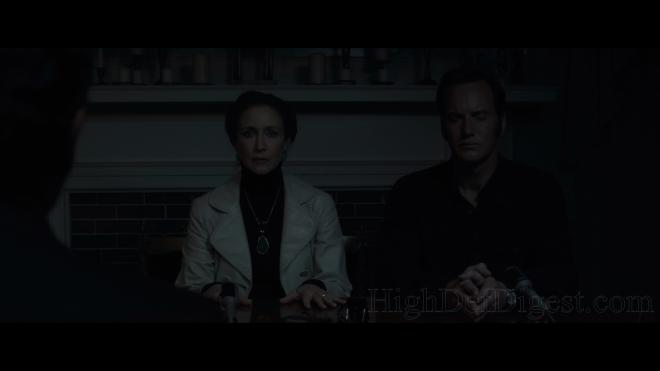 This is one of the production's better aspects, which is to be expected in a supernatural popcorn flick. So, it's a shame when that momentum effectively established early on can't be sustained to the end, as it was in its predecessor. Don Burgess's photography is faultless, amplifying the apprehension with a spine-tingling atmosphere that seems to permeate even the most tender moments with a feeling of uneasiness. Wilson's heartwarming rendition of Elvis Presley's "Can't Help Falling in Love" remains blanketed by a gray overcast and an understated palette. Later, when the Hodgson house turns into a haunted carnival-like ride, Burgess's cinematography is terrifically complemented by Joseph Bishara's deceptively simple but dreadfully bloodcurdling musical score. However, just a little over halfway into its 134-minute runtime, the film is no longer a paranormal shocker, in spite of Burgess and Bishara's excellent contributions. Plodding along with suspicions by the skeptical Dr. Gregory (Franka Potente) and dialogue on religious faith that sometimes comes close to sermonizing, the jump scares and Kirk M. Morri's editing grows predictably routine, racing to a disappointingly brief showdown and a much too easy win.

And yet, in the face of these minor gripes, 'The Conjuring 2' stands proud as one of the better horror flicks of the year. Although we're really only at the halfway point. It's not quite as good as its predecessor, but it's a strong follow-up with some smarts accentuating a story co-written by the director with Chad and Carey Hayes. Porting over the same theme from the first movie, the Warrens sympathize with the Hodgson's troubled family and financial issues, choosing to help when others won't. The only other believer is fellow paranormal investigator Maurice Grosse (Simon McBurney) on a personal journey for comfort in the belief of an afterlife. This appears to be the common thread piecing the franchise together. Wilson's Ed divulges that families in strife tend to be more susceptible to supernatural forces. Considering there are plenty more of Warrens' investigations dealing with families, fans should expect the next installment to be on the Smurl haunting or perhaps a better retelling of Snedeker house in Connecticut. Whichever he does next, Wan has proven himself a talented craftsman of the horror genre, showing a unique signature style that skillfully builds the tension to its boiling point and loves scaring audiences.

New Line Cinema and Warner Home Video bring 'The Conjuring 2' to Blu-ray on a Region Free, BD50 disc with an UltraViolet Digital Copy inside a blue, eco-cutout case. After a couple skippable promos, viewers are taken to a static screen with a generic set of menu options along the bottom of the screen and music playing in the background.

The horror sequel delivers the shocks with a superb, near-reference 1080p/AVC MPEG-4 encode, though the stylized cinematography produces a couple noteworthy concerns.

Shot on Arri Alexa cameras, Don Burgess's photography displays a subdued, gray downcast tone that complements the plot's somber theme and effectively sustains a spooky, eerie atmosphere. Nevertheless, with spot-on contrast and crisp, clean whites throughout, the presentation is comfortably bright with excellent visibility of background information in the far distance. This also allows for inky-rich, pitch-black shadows that never obscure the darker portions of the frame, unless intentionally done for specific jump scares. And even during those moments, fine details along the walls and in clothing remains intelligible.

On the whole, the film's deliberately understated look greatly affects the colors, which largely seem muted and favoring a teal-orange palette with lots of earth tones. But Burgess's camerawork still provides plenty of accurately rendered and nicely saturated primaries, like the many blues and reds in the children's clothes, while browns and yellows in the furniture and the interior design of the Warren house pop off the screen with vibrancy. Skin tones also appear healthy and appropriate to the climate with highly-revealing, lifelike facial complexions.

Presented in a 2.40:1 aspect ratio, the squeaky-clean transfer shows sharp definition and clarity in every scene. From the fuzzy fabric textures in clothing to the tiniest crack and split in the ugly leather chair, details remain distinct. Every nook and cranny of the Hodgson house is exposed, and every stain, defect and damage along the walls is plain to see. The only drawback holding the presentation from perfection are the few minor instances of light posterization inherent to the digital photography. But aside from that, the film looks excellent on Blu-ray.

The frights continue with a terrifyingly good, demo-worthy Dolby Atmos soundtrack that makes the best use of the codec, perfect for those wanting the right amount of scares and creeps this Halloween season.

Even in its Dolby TrueHD 7.1 alternative for those without the equipment, the design haunts with an excellent array of spooky noises and hair-raising sounds. With superb directionality, voices whisper and heavy panting breathes in the back of the room with blood-curling realism while other unknown rackets in the house loudly crash or light thumps in the distance echo all around. Even during more calm sequences, such as when the rain pours or characters are outside chatting, random effects are discretely heard at all times, creating an immersive and awesomely satisfying 360° soundfield.

In terms of the Atmos track, sound mixers deliver the goods with plenty of activity in the ceiling speakers to make listeners wonder if someone is walking through the attic. Those same creepy thuds ringing throughout the house also echo and reverberate from above, making scenes of deliberate silence all the more ominous and terrifying. But one of the best moments is when the pair of police officers arrive to investigate the Hodgson house, and loud, rattling noises move in the upstairs, flawlessly panning from the top rear right corner to the top front left side and down left channel. Later similar scenes do much of the same with outstanding accuracy and striking discreteness. Keeping the overhead channels continuously activity is the pouring rain and crashing thunder as though right above the listening area, creating a realistic, 3D soundscape.

In the front soundstage, imaging feels exceptionally broad and richly dynamic. Generating a large, spacious sense of space, subtle noises smoothly travel across all three channels with appreciable balance and into the top front heights for an engaging half-dome effect. Minor details and background activity are heard with precise clarity and fidelity, and even the loudest segments remain distinct with great separation between the highs and mids. The impressively layered and spine-tinglingly complex music of Joseph Bishara spreads evenly across the screen and bleeds into the sides and front heights with engulfing effectiveness. The low-end jolts the senses with a powerful and robust presence and a couple, subtle ultra-low moments enough to rattle walls, rumble the couch and nicely test the capabilities of your subwoofer (bass chart). Amid the scares and supernatural chaos, voices are well-prioritized and intelligible in the center, making this one of the best and most fun tracks in the object-based sound format.

Although not as good as its predecessor, 'The Conjuring 2' remains a strong and effective supernatural sequel, focused on another troubled family tormented by malevolent spirits. The second half of the film, which takes the Warrens across the Atlantic to England, begins to plod along with routine frights, but it manages to sustain a creepy atmosphere and is overall satisfying, making it one of the stronger horror features of the year. The Blu-ray arrives with an excellent video transfer and an even better, demo-worthy audio presentation that should scare viewers at home. Though the collection of supplements is disappointingly small, the package is recommended for fans of the franchise and those looking for a good scary flick this Halloween season.

Sale Price 5.5
List Price 9.97
Buy Now
3rd Party 2.5
In Stock.
See what people are saying about this story or others
See Comments in Forum
Previous Next
Pre-Orders
Tomorrow's latest releases