In my recent review of 'Underworld: Evolution,' I mentioned that as a horror film fan, I have become a bit despondent over the direction that the genre has taken lately, namely that there only seem to be two kinds of horror films being made today: sequels, and videogame-inspired action-horror hybrids. But I realize now that I forgot to add a third kind in there, the now-venerable serial killer slasher flick. Ever since 'The Silence of the Lambs' took home a truckload of Oscars and created a verifiable cottage industry for Hannibal Lecter, and then David Fincher's 'Se7en' came along and proved that gruesome, irony-free murder mysteries about vicious killers meant big business, Hollywood hasn't stopped churning them out. Classier than your average 'Friday the 13th' movie, and boasting A-list stars, flicks like 'Copycat,' 'Kiss the Girls,' 'The Bone Collector,' 'Fallen,' 'Taking Lives' and countless others have become the horror films of choice for those who find the PG-13 thrills of 'The Sixth Sense' and 'The Ring' too safe, but aren't ready for the mayhem and dismemberment of the latest 'Texas Chainsaw Massacre' flick.

Which is why I have to hand it to 'Saw.' This unassuming, low-budget (under $1 million) slasher-cum-serial killer mystery-thriller flick stunned Hollywood in 2004 when it came out of nowhere to gross over $50 million. But more than just scaring up big box office and spawning its own franchise (this year's 'Saw 2,' and a forthcoming 'Saw 3'), the original 'Saw' bridged the gap between the more "highbrow" adult serial killer flick, and the nasty, gore-soaked grindhouse thrills of such ultra-nasty exploitation movies as 'Hostel' and 'The Hills Have Eyes.' Intricate in its plotting, with memorable characters and solid production values, but also delivering enough of the red stuff to not alienate the hardcore terror audience, it was the rare horror film you could almost take your mom to go see.

Since preserving the film's mysteries are paramount to the effectiveness of 'Saw,' I won't spill any of its secrets here. Instead, I'll just say its narrative is sort of like an overt reconstruction of 'Se7en' mixed with 'Final Destination,' plus a dash of those 'Hellraiser' flicks thrown in for good measure (only with a little less bondage gear). As tightly scripted as an ancient Chinese puzzle box, the narrative of 'Saw' melds a series of Mousetrap-like gruesome murder scenarios that would make Rube Goldberg proud with your standard serial killer revenge plot. But one of the many clever conceits that makes 'Saw' feel as fresh as it does is that the director-producer-screenwriter team of Aussie newbies James Wan and Leigh Whannell (who also co-stars, how's that for a postmodern triple lutz?) remember that old trick from the first 'Star Wars' -- just start your film right in the middle of all the action and nobody will notice the plot holes. Told largely in flashback, 'Saw' begins with Whannell and a festively-plump Cary Elwes waking up in a dark, scummy bathroom, their only clue to what's going on being a cryptic message left by a deranged killer named "Jigsaw." We know only as much as they do, and it is a credit to Wan and Whannell's great opening hook that we're willing to suspend our disbelief for as long as we do, given how ludicrous the "Jigsaw" guy's plot ultimately becomes.

But then, the appeal of the 'Saw' films aren't really their plotting anyway. It's the series of moral questions its core concept raises that fascinate and repulse. Suffice to say your eventual enjoyment of 'Saw' will be in direct proportion to the pleasure you get from watching (more or less) innocent people be plunged into nightmarish situations where they must make horrendous decisions with no correct outcome. If you were to wake up with some deadly steel trap-contraption viced on your head, and told you had sixty seconds to retrieve the key by stabbing someone in the stomach to retrieve the key in their intestines, would you do it? Or die a martyr? (Think fast!) Sick shit, yes, but compelling nonetheless.

Such icky ethical quagmires are what makes 'Saw' perhaps the first mainstream horror franchise whose primary appeal is not solely based on the cruelty of its iconic horror villain, or its creative murder sequences, or relentless jolt scares. No, 'Saw' continues to pack 'em in at the multiplex because we've become so scarred by the real-life horrors of this post-9/11 world that we know that sometimes in life there are situations in which there is no right answer. Morality has become reduced to the degree in which you're fucked, or you fuck someone else. It ain't pretty, it ain't reassuring, and yes, there will be blood. But in the world according to 'Saw,' those are the cards you are dealt. Count me among the millions of others who eagerly await 'Saw 3' for our next dose of gory, gruesome, unanswerable fun and games.

The quality of the transfer on this new Blu-ray release of 'Saw' is a tough one to judge, for two reasons. First, the film has already been released in two different standard DVD versions -- one the R-rated theatrical cut, the other a "Director's Cut" that not only restored a small amount of excised gore, but also saw some brief yet significant editorial snips by director James Wan for pacing as well as changes in the film's soundtrack (bye-bye annoying nu-metal songs, which made some of the movie's murder sequences play like a Marilyn Manson video). And second, those two previous DVDs boasted different transfers -- the Uncut version of 'Saw' was a bit less grainy and its colors slightly bolder than the theatrical cut (and seems to be the one the film's fans continue to prefer).

So though this new Blu-ray version of 'Saw' does improve on the video quality of both of those DVDs in most respects, whether or not you would want to upgrade your old disc to this new one depends on which version of the film you want. Lionsgate includes only the R-rated, 100-minute cut on this Blu-ray release, and while it is of course important to have 'Saw' available in its original theatrical form, it seems equally as important to provide the film in the manner its director prefers. In any case, here's betting that Lionsgate will give us the a Blu-ray double dip of 'Saw' containing the uncut version, but in the meantime, it's the theatrical version or nothing.

That caveat aside, how does this disc look? Pretty dang good, actually. Presented in 1080p, it is a very nice presentation that is all the more impressive given the film's low-budget origins. Yes, the image is a bit grainy in spots, but that is representative of its intended gritty, dark look, and I was never distracted by the state of the print. Blacks are rock solid throughout (only the occasional shot looks a bit washed out, but I think this is intentional as well) and contrast is quite good. 'Saw' looks very sharp, with a nice sense of depth even in the darkest scenes -- shadow delineation here is really quite great, with fine details in the shadows usually visible. Long shots looked slightly soft to me -- again, indicative of the film's neo-realism shooting style. I also liked the use of color -- while the film's palette is reduced to mostly mucky greens, yellows, browns and blues, the splashes of red (ahem) are bold and effective. Hues also never smear, and don't look noisy (though again there is film grain present). Overall, this is a very detailed transfer with a nice sense of depth, and 'Saw' looks better in HD that I honestly expected it would. 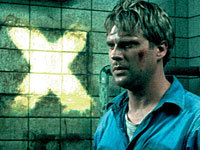 Alas, one final (major) problem to spoil the fun. While I didn't notice it at first on the previous two Lionsgate Blu-ray titles I've reviewed ('Crash' and 'Lord of War'), for the first time on 'Saw' I could see an odd "stutter" to the image during select shots with rapid movement. I had to rewind to really notice it, but it does appear that there is some sort of jumping between individual frames of the image. I thought perhaps this was due problems with my first-gen Samsung player's 3:2 pulldown, but switching between the player's 720p, 1080i and 1080p output (all via HDMI), the problem remained. (I've been told some other sites have found the problem reduced via the Samsung's component output, but I had no such luck). I hope this issue is somehow due to problems with current Blu-ray firmware and the Lionsgate discs themselves (I have not had this problem on any of the Blu-ray titles Sony has released thus far). In any case, this stutter is there and it is irritating once you notice it.

I found no problems with the Dolby Digital EX and DTS-ES 6.1 surround tracks included here. Granted, neither offers any real upgrade over the same soundtrack options offered on the previous DVD releases (I hope Lionsgate embraces Dolby TrueHD and/or PCM on future releases) but 'Saw' sounds quite good as is, so it is hard to complain.

For a film so inexpensive, it is a great compliment to say that real creativity went into the sound design of 'Saw.' Surround use is often aggressive, with both overt and subtle sounds directed to the rear channels. There are some nice instances of pans across the entire soundfield, which even if spotty at times, at least deliver an effective sense of atmosphere and envelopment. Dynamic range is also well above average for a film of this type, with no harsh or tinny high end and fairly substantial low bass. No, this soundtrack can't rival those typical to a big-budget action spectacular, but 'Saw' sounds terrific for a film whose entire budget probably cost less than the catering bill on the last Michael Bay film.

Sigh. Once again, no extras on Blu-ray from Lionsgate. Since both of the previous DVD versions of 'Saw' benefited from a wealth of distinct supplements, even a token here would have been nice -- how about a low bit rate audio commentary next time? Perhaps we should send Mr. Jigsaw over to the offices of the DVD execs at Lionsgate?

'Saw' is certainly a film not to everyone's taste -- and if you don't like horror films, then for God's sake don't go anywhere near it. Alas, the virtues of the movie aside, this first horror release on the Blu-ray format is a mixed bag. The video transfer is problematic despite many good points, and there are no supplements to speak of. Even the fine soundtrack can't rescue 'Saw' from being another Blu-ray disappointment. Oh, there will be blood...