She terrified you in "The Conjuring," but this is where it all began for Annabelle. Capable of unspeakable evil, the actual doll exists locked up in an occult museum in Connecticut —visited only by a priest who blesses her twice a month.

On one horrific night, their home is invaded by members of a satanic cult, who violently attack the couple. Spilled blood and terror are not all they leave behind. The cultists have conjured an entity so malevolent that nothing they did will compare to the sinister conduit to the damned that is now...Annabelle.

Far from original or particularly compelling to stir the nightmares of the most-hardened of horror-hounds, 'Annabelle,' a prequel of sorts to 2013's vastly superior 'The Conjuring,' is essentially a potpourri mix of themes and ideas almost lazily borrowed from other genre favorites. In fact, the plot itself from relatively new writer Gary Dauberman basically pilfers — presumably with permission, of course — from James Wan's supernatural shocker by focusing primarily on a porcelain doll dubbed Annabelle, which was featured in the original as a minor subplot, making it more of a spin-off than a sequel. A true follow-up is currently in the works scheduled for release next year. Nonetheless, the film from long-time cinematographer John R. Leonetti, whose other directorial efforts are two embarrassingly bad sequels, 'The Butterfly Effect 2' and 'Mortal Kombat: Annihilation,' competently delivers the frights and several other hair-raising moments.

The movie opens in similar fashion to its predecessor in 1970 where a pair of roommate nurses relate their eerie experiences connected the doll with renowned paranormal investigators Ed and Lorraine Warren, who were played by Patrick Wilson and Vera Farmiga in the original but not seen here, save for Wilson's voice. Not knowing the history of the doll — how it came to be possessed by a demon or the fateful violent events which haunt it — is what added mystery and a creepy factor to that disturbingly unemotional face with lifeless glass eyes. The filmmakers, however, eschew what worked in the first place, basing the story on nothing at all except that the real-life rag doll now sits in the Warren's personal collection of oddities. The film flashbacks to the year prior in the Los Angeles area at around the same time as the Manson family murders, though certain details have been altered to match a desired effect. 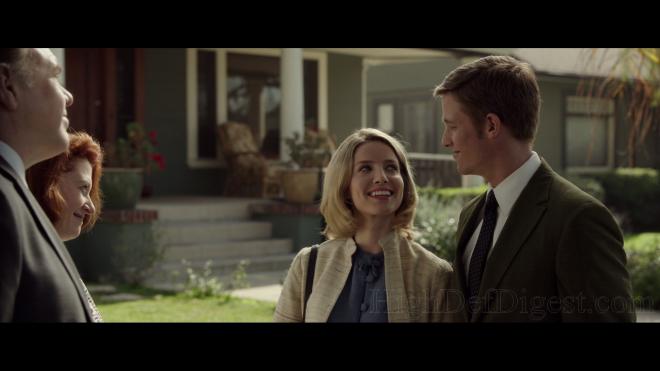 In truth, the liberties taken with history are tolerable because they function to achieve a deliberate effect that admittedly works in the story's favor. Our protagonists are a young married couple (played aptly but with nothing of genuine note by Annabelle Wallis and Ward Horton) expecting their first child while hubby is still studying to be a medical doctor, so the stress and strain on their marriage is reasonably high, which predictably leads to him doubting his wife's claim of paranormal disturbances. The couple's name makes for a clever wink-wink for the most astute in the audience: Mia and John as in Mia Farrow and John Cassavetes of Roman Polanski's 'Rosemary's Baby.' The murder of their next-door neighbors — a possible reference to the real Leno and Rosemary LaBianca slayings — provides the explanation for the haunted doll, dramatically and neatly tying in the whole Manson, occult, the period and cult angle in one fell swoop.

In spite of these minor crafty allusions, 'Annabelle' falls victim to cheap scare tactics and other possible hints — more like subconscious and likely unintentional imitations — which are nowhere nearly as effective or amusing. When Father Perez (Tony Amendola) enters the picture to offer the couple spiritual guidance and answers, the story carries strong 'Exorcist' vibes. Meanwhile, Alfre Woodard's Evelyn feels like a stock character, here not only to add the production some gravitas but also to provide opportune reading material fortuitously related to Mia's situation. And still, if overlooking those aspects which weigh down the film's 98-minute runtime to a crawl, genre fans will find themselves decently entertained. Although Leonetti's tactics seems to take inspiration from Wan's 'Insidious,' the prequel-slash-spin-off works at delivering several gratifying scares and enjoyable bloodcurdling, spine-chilling moments.

New Line Cinema and Warner Home Video bring 'Annabelle' to Blu-ray as a two-disc combo pack with an UltraViolet Digital Copy. The Region Free, BD50 disc sits opposite a DVD-9 copy inside a blue, eco-cutout case with slipcover. After a couple skippable promos, the screen changes to a static screen with a generic set of menu options along the bottom of the screen.

The terrifying porcelain doll terrorizes Blu-ray with a frighteningly good 1080p/AVC MPEG-4 encode that'll leave viewers with nightmares. Mastered from a digital source, the transfer comes with that sterilized appearance now seemingly standard and pretty much expected as the result of filming on HD cameras. Nonetheless, the photography of Joseph Bishara remains attractive with sharp, distinct details throughout. Annabelle's dress is meticulous with well-defined lines, and the faces of the cast appear natural with lifelike textures. Colors are bold and accurate, though a good chunk of the video has a deliberately but mildly subdued palette. Contrast tends to run a tad hot, but whites persist brilliantly and cleanly. However, black levels are slightly affected, looking somewhat drab and often murky, making the 2.35:1 image rather flat and plain.

The prequel debuts on home video with an equally outstanding DTS-HD Master Audio soundtrack that'll scare the bejesus out of listeners. As we'd expect from a supernatural horror flick, rear activity is filled with a variety of atmospherics that raise the tension and suspense. Of course, these discrete effects are generally reserved for the more action-packed sequences, making other moments noticeably quiet. But nevertheless, hearing voices, the random unexplained noise and tiny footsteps scrambling from one side to the other creates a convincingly terrifying soundfield. Meanwhile, the fronts exhibit a detailed mid-range with crystal-clear clarity in the highs and excellent balance between the channels, generating a wide and spacious soundstage. The low-end is quite punchy and robust, hitting some very appreciative ultra-lows that add to the suspense (Bass graph). With precise, well-prioritized vocals in the center, the lossless mix is one horror fans and audiophiles will enjoy.

Although nowhere near as good as its predecessor, 'Annabelle' still delivers the scares with some satisfying effectiveness. When nothing else is available, the prequel-slash-spinoff offers a decently creepy good time. The Blu-ray arrives with a hair-raisingly excellent audio and video presentation that'll leave fans happy, but supplements are pretty weak by comparison. Overall, the package makes for a good rental when the mood strikes.