The Serpent and the Rainbow

Dennis Allan is a scientist who visits Haiti on the strength of a rumour of a drug which renders the recipient totally paralyzed but conscious. The drug's effects often fool doctors, who declare the victims dead. Could this be the origin of the "zombie" legend? Alan embarks on a surprising and often surreal investigation of the turbulent social chaos that is Haiti during the revolution which ousted hated dictator "Baby Doc" Duvalier. Often a pawn in a greater game, Alan must decide what is science, what is superstition, and what is the unknown in a anarchistic society where police corruption and witch-doctory are commonplace...

Very loosely inspired by the non-fiction book from ethnobotanist Wade Davis, 'The Serpent and the Rainbow' ranks as one of Wes Craven's more memorable films, just behind now-legendary classics 'A Nightmare on Elm Street,' 'The Last House on the Left,' 'The Hills Have Eyes' and 'Scream.' A large part of its popularity comes from the subject matter itself, taking the zombie mythology back to its original roots in mysticism, folklore, and the Voodoo religion. Although there had been other horror movies in the past that touched on religious superstition and the reanimated dead — most notably the 1932 classic 'White Zombie' and Ed Wood's infamously bad 'Plan 9 from Outer Space' — Craven's take felt like a fresh, new spin on a favorite subgenre, something more challenging and with a bit more meat on its bones. Modern audiences, at that time, had all but forgotten the connection to real-life legends thanks to a barrage of films dealing with rotting corpses hungering for human flesh, which, of course, began with George A. Romero's seminal archetype 'Night of the Living Dead.'

Starring Bill Pullman as a highly skeptical ethnobotanist and anthropologist, the script by Richard Maxwell and Adam Rodman follows American Dennis Alan into Haiti to study the ingredients of a powder used for creating zombies. Early on, when Alan is discussing the purpose of the investigation with a pair of pharmaceutical heads, the filmmakers make pretty clear they are not referring to contemporary notions of the walking dead, with Pullman even going so far as to laugh at the absurdity of seeing a reanimated corpse. No, in this now 1988 Craven favorite, Michael Gough (legendary actor of several beloved Hammer Films but best known as Alfred in the 'Batman' franchise) and Paul Guilfoyle of the 'CSI' television series explain the original meaning of the term to the uncertain Alan, as to contemporary moviegoers — a shrewd means for delivering exposition. Alan is being hired to study the ingredients in the hopes of discovering the powder's medicinal possibilities, particularly as an anesthetic, one which induces a deep paralysis in surgery patients. 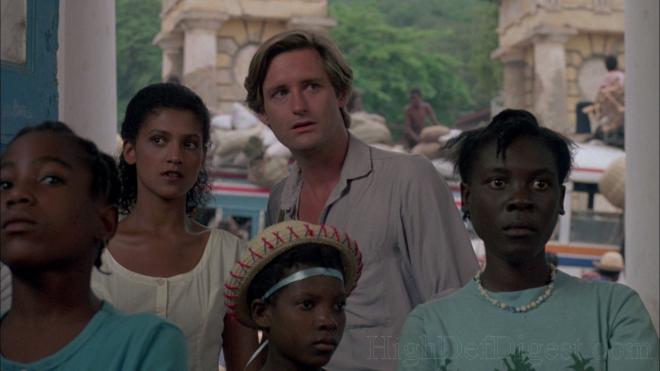 Once in Haiti, Alan is welcomed to the country as much with open arms as despised animosity, which makes up much of the film's suspense, often toeing the line between straightforward horror and some sort of political thriller. Alan quickly makes allies with local doctor Marielle (Cathy Tyson), who treated a man presumed dead and buried seven years earlier but found wandering the Haitian streets. Later, he's introduced to a vodou priest named Lucien Celine (Paul Winfield), who welcomes the chance of the world seeing his religion in a different light than fear and consternation, and witch doctor Mozart (Brent Jennings), who's initially hesitant of sharing Voodoo secrets until he's offered momentary compensation. On the other extreme, the commander of the Tonton Macoute, Captain Dargent Peytraud (Zakes Mokae), doesn't like the presence of an American snooping around his country to confirm ancient superstitions and stereotypes. The man turns to whatever means necessary to scare Alan away, including the dark magical powers Alan was doubtful existed.

Of course, this being a Wes Craven production, 'The Serpent and the Rainbow' is not without some attempt at a deeper meaning or some weighty substance hidden underneath the zombie horror and our collective fear of being buried alive. Granted, the story is definitely geared towards generating a creepier take on the traditional walking dead, which it accomplishes admirably, placing more attention on atmosphere and a general air of hostility. With excellent camerawork by John Lindley ('Field of Dreams,' 'Sneakers,' 'Pleasantville'), Craven keeps his audience on apprehensive edge with Alan being a stranger on an island population seeped in cultural superstitions and dark, ritual folklore. But, there's also a sense of Peytraud's suspicions of Alan, working for a pharmaceutical corporation with an interest of exploiting the country's rich cultural history while the people gain nothing, extending beyond simple mistrust of a foreigner. For his disbelief, Alan, and by extension, the audience, is given a true demonstration of voodoo magic and the real horror of being a zombie.

Shout! Factory calls forth 'The Serpent and the Rainbow' to Blu-ray as a Collector's Edition under the distributor's Scream Factory line. The Region A locked, BD50 disc is housed inside the normal blue case with brand new reversible cover art and a cardboard slipcover. At startup, the disc goes to a menu screen with full-motion clips while music plays in the background.

The Wes Craven horror classic is reanimated from the dead with a lively and largely satisfying AVC-encoded transfer that is a decided improvement over previous home video editions. However, the video isn't quite up to par with other features from the same period, but that can be mostly chalked up to the photography style along with the condition and age of the elements used. A few moments display poor resolution, noticeably go flat and look displeasingly soft and blurry. Nevertheless, the overall presentation is very revealing with clean, discrete lines and sharp definition throughout. One can plainly make out textures in the clothing, facial complexions appear natural with visible pores and the surrounding foliage is distinct.

Presented in its original 1.78:1 aspect ratio, contrast, on the other hand, falls on the lower end of the grayscale, giving the picture a somewhat bland grayish overtone, yet this is more than likely the result of deliberate cinematography rather than any issues with the encode since whites still come through crisp and brilliantly. Black levels are also deep and full-bodied for the most part, but shadows and the darkest portions of the frame tend to obscure and engulf many of the finer details. Colors benefit the most from the upgrade with primaries looking particularly bold and bright though secondary hues seem somewhat restrained and a tad lacking. But with a nice, attractive layer of natural grain throughout, the end result is a very good, film-like presentation of a horror favorite.

Deadly voodoo rituals penetrate our darkest nightmares and deepest fears with an excellent DTS-HD Master Audio stereo soundtrack that should delight fans to no end.

Staying true to the original design, the entire front soundstage is broad and energetic with a wealth of activity in the background. From the boisterous, bustling Haitian streets to the small critters and wildlife infesting the forest, imaging feels immersive and terrifically engaging with great balance between the channels, delivering good panning effects and convincing off-screen action, and clear, intelligible vocals in the center. The mid-range is surprisingly extensive with distinct clarity and separation, providing the film a new level of appreciation while Brad Fiedel's haunting score enjoys the breathing, enhancing the soundfield with a variety of details between the various instruments. Low bass may not be particularly impressive, but it's accurate, responsive and appropriate for a production of this age, exhibiting a couple nice weighty moments here and there. Also, the lossless mix lends itself admirably well to the receiver's DSU function, expanding the soundfield with various atmospherics in the rears and creating a wider soundstage thanks to the front heights.

Loosely inspired by the non-fiction book from ethnobotanist Wade Davis, 'The Serpent and the Rainbow' ranks as one of Wes Craven's more memorable films, taking the zombie mythology back to its original roots in mysticism, folklore, and the Voodoo religion. Starring Bill Pullman as a highly skeptical ethnobotanist and anthropologist, the production is a different type of Craven project, focused on a fresh spin of a familiar subgenre as an atmospheric thriller that's highly entertaining. The Blu-ray from Scream Factory arrives with strong picture quality and an excellent audio presentation. Although the bonus section is somewhat lacking, the overall package nonetheless makes for a great addition to the cult collection. Recommended.

Sale Price 20.99
List Price 34.93
Buy Now
3rd Party 19.73
In Stock.
See what people are saying about this story or others
See Comments in Forum
Previous Next
Pre-Orders
Tomorrow's latest releases