Martin Bishop (Robert Redford) is the head of 'Sneakers', a computer group who test security systems. However, his political activist past catches up with him when the government use it as a lever to force him into doing some of their hi-tech dirty work. Bishop and his team reluctantly comply, only to discover that the missing black box they have been hired to retrieve can break into any computer system in the world! Starring Robert Redford, Dan Aykroyd, Ben Kingsley, Mary McDonnell, and River Phoenix.

For a movie stacked with so many famous faces in its cast, including three Oscar winners and a couple of nominees, Phil Alden Robinson's 1992 techno caper 'Sneakers' is a surprisingly slight, breezy little picture. I consider this a good thing. Far too often, after landing several big name stars to work together, filmmakers feel pressured to give them something important to do, material laced with serious themes and heavy portent. A lot of the time, that sort of thing turns out to be really overwrought and dull. Every once in a while, for a change of pace if nothing else, isn't it nice to put Bob Woodward, Virgil Tibbs and Gandhi in a room together and let them have fun?

Robert Redford leads the cast as Martin Bishop, a former 1960s student activist (played in flashback by 'Twin Peaks' cast member Gary Hershberger with a fantastic Sundance Kid mustache and haircut) who was forced to drop out of sight after almost getting caught hacking into the Republican National Committee's bank accounts. His partner at the time wasn't so lucky. These days (or, you know, 1992), Bishop uses his nefarious skills for good. As we learn after a successful bank heist, he runs a small agency that gets hired by companies or institutions to test the weaknesses of their security systems. If he can break in, so can somebody who really wants to rob the place.

Other members of Bishop's team include a former CIA agent (Sidney Poitier), a blind computer genius (David Strathairn), a paranoid conspiracy nut (Dan Aykroyd), and a young apprentice (the late River Phoenix) who, quite honestly, doesn't get a whole lot to do but has a nice moment to shine at the end. Also important to the plot are Mary McDonnell, Ben Kingsley, Stephen Tobolowsky and Timothy Busfield.

When Bishop is approached by NSA agents who want to hire him for an off-the-books mission to steal a special black box from a brilliant cryptographer (Donal Logue in an early role) with possible ties to Russia, he naturally resists at first, until they offer to clear his criminal record in exchange. His involvement will lead to many twists and turns, a couple of murders, and the uncovering of a big conspiracy. 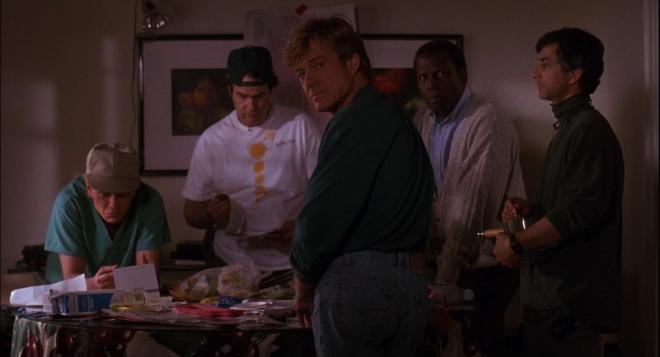 Movie plots that rely too heavily on technology tend to date quickly and badly. What's state-of-the-art at the time of release looks antiquated a few years later, and speculative tech is easily proven implausible. 'Sneakers' indeed suffers a little of that malady. Its depiction of computer hacking is at once both amusingly simplistic and totally absurd in its reliance on Hollywood computer magic. The black box MacGuffin and the villain's plans for what to do with it ultimately turn out to be rather far-fetched.

On the other hand, the film was way ahead of its time with story points about the NSA's illegal spying on American citizens. I just about fell out of my chair laughing when Bishop accused the NSA of wiretapping his phone, and the agent replied, "No, that's the FBI. We're not chartered for domestic surveillance." That exchange actually factors into the plot in a big way later, and plays so much differently in the post-Snowden era than it could have in the early '90s.

Never fear, the political content in the film never gets too heavy. 'Sneakers' is part conspiracy mystery thriller, but also part comedy. It has both suspense and laughs. For as old as some of the technology on display may look now, the cleverly staged set-pieces and the witty character banter are as fresh and entertaining as ever.

Universal Studios Home Entertainment last released 'Sneakers' on DVD as a Collector's Edition in 2003. An HD DVD (yeah, remember that?) followed in 2007, when the studio was exclusive to that format and churned out a lot of catalog titles to support it. After the infamous High-Def Format War ended a year later and Universal grudgingly switched to Blu-ray, its catalog product slowed down considerably and many movies have taken a long time to make the transition. (Some still haven't.)

Here we are eight years later, and the studio finally bothered to port 'Sneakers' to Blu-ray. The disc arrived on February 17th, 2015 as a Best Buy retailer exclusive, concurrently with 'Munich' and 'The Andromeda Strain'. According to Amazon, 'Munich' will expand to general retail on May 5th, but I can't find confirmation about the other two movies at the time of this writing.

The 'Sneakers' disc automatically starts the movie upon insertion into a Blu-ray player and has no Top Menu screen, just a pop-up menu. 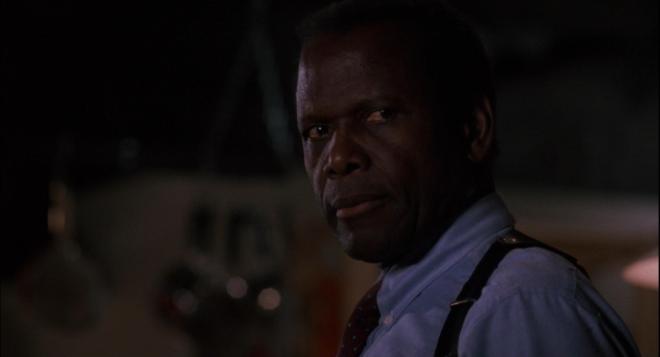 Considering the shoddy treatment that Universal generally affords its catalog titles, the 'Sneakers' Blu-ray is surprisingly decent. That's not to say that it's perfect, mind you. However, the 1080p/AVC MPEG-4 transfer does not appear to suffer the typical problems with heavy-handed Digital Noise Reduction or Edge Enhancement you'll find on too many back catalog releases from the studio.

While I don't have either the old DVD or HD DVD on hand to compare, I assume that the Blu-ray is sourced from the same video master used for those without any recent remastering. It looks like an older film scan. The picture is a little soft and is frequently very grainy. Minor speckling is present on the source elements more or less throughout. I'm sure that a fresh, higher-resolution scan would resolve more detail and control the grain better. With that said, the amount of detail present here is still respectable. Colors look very good and, as I mentioned, the transfer hasn't been molested with objectionable digital processing.

Where the Blu-ray mostly falters is that the image is very dark – too dark. Black levels are good and solid, and shadow detail is acceptable without overt crushing, but I have a hard time believing that the movie was intentionally photographed to look this dim. Aside from the scenes that take place in bright daylight (which aren't many), most other shots and scenes have few points of brightness in them.

I've peppered this review with some screenshots taken directly from the Blu-ray (cropped to remove letterboxing). Most of them look really terrible on my computer monitor. The movie doesn't look nearly so bad on my calibrated projection screen, but I still think the brightness levels are off.

The movie opens with a five-minute black-and-white prologue that's pillarboxed on the screen at a 4:3 aspect ratio. The rest of the film is presented at 1.85:1 with small letterbox bars on the top and bottom of the screen. 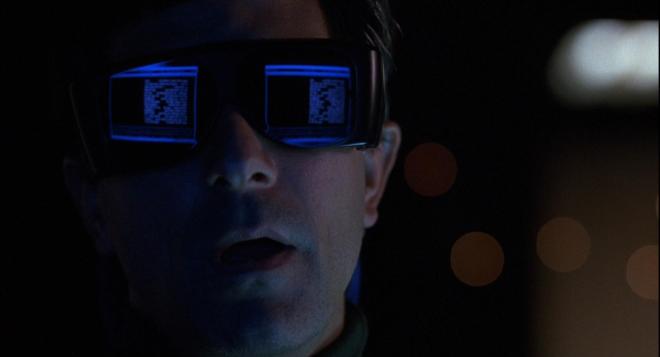 The DTS-HD Master Audio 5.1 soundtrack on the disc doesn't call too much attention to itself, either for good or ill. Dialogue is clear. Surround usage is moderate, mostly reserved for music. Directional sound effects are more likely to steer hard to the front left and right channels than the surrounds, but a few pan to back of the room in an organic enough fashion. Fidelity of the entire mix, including the music, is fine. I don't have much more to say about it than that.

James Horner composed the musical score, with Branford Marsalis prominently featured on saxophone. It's a pretty playful and fun score in the drama and "caper" parts of the movie, but turns very derivative of Horner's work on countless other famous movies during the "thriller" bits. That's par for the course with Horner, of course. 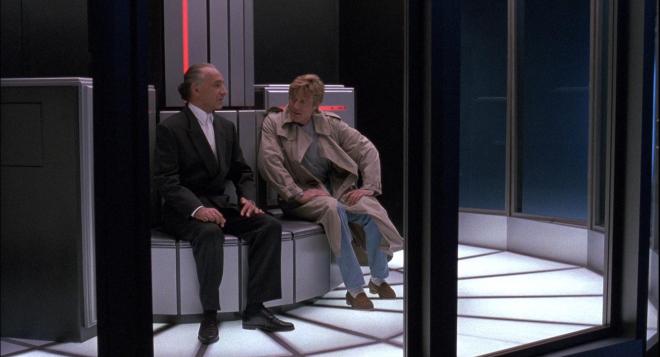 The Blu-ray carries over all of the bonus features from the DVD released in 2003, not that it had many. 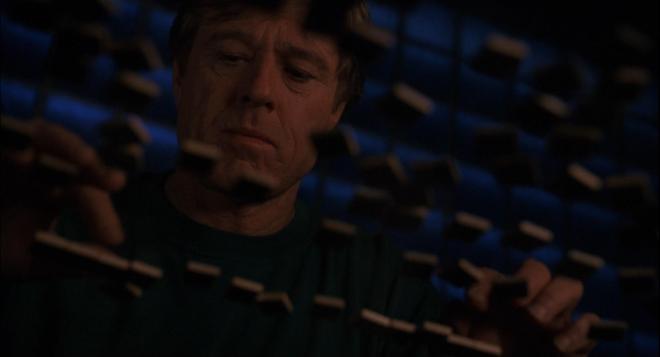 Even with all the notable names listed on the poster art, 'Sneakers' was always a small movie of modest ambitions. That may be more of a strength than a weakness. More than two decades since its original release, the film still holds up well as an entertaining little caper. The Blu-ray may not be perfect, but it's better than average for a catalog title from Universal, and I doubt we're likely to get anything better in the foreseeable future.