Ingrid Bergman: In Her Own Words - Criterion Collection

Whether headlining films in Sweden, Italy, or Hollywood, Ingrid Bergman always pierced the screen with a singular soulfulness. With this new documentary, made on the occasion of the one hundredth anniversary of Bergman’s birth, director Stig Björkman allows us unprecedented access to her world, culling from the most personal of archival materials—letters, diary entries, photographs, and 8 mm and 16 mm footage Bergman herself shot—and following her from youth to tumultuous married life and motherhood. Intimate and artful, this lovingly assembled portrait, narrated by actor Alicia Vikander, provides luminous insight into the life and career of an undiminished legend.

We know her on screen. Characters like Ilsa in 'Casablanca,' Maria in 'For Whom the Bell Tolls,' Alicia in 'Notorious,' the saintly Joan of Arc, and Anna in 'Anastasia' define her as an actress of enormous range, strength, and sensitivity. Like her fellow Swede, Greta Garbo, she's breathtakingly beautiful and innately gifted, but instead of appearing aloof and mysterious, she's open and accessible. Audiences can relate to her, but they also admire her conviction and nobility in multi-faceted roles that often test her mettle. She won three Oscars, was nominated for four others, acted in five languages, and appeared in more than 50 films in six countries over the course of a magnificent 50-year career.

But who was Ingrid Bergman off screen? Was she like the characters she often portrayed - virtuous, forthright, noble, and vulnerable? Or did she more closely resemble the scandalous, headstrong woman who endured the scorn of a nation when she abandoned her husband and 11-year-old daughter in 1949 to have a child with Italian director Roberto Rossellini? The answer, of course, lies somewhere in between, and director Stig Björkman - with the help of Bergman herself - explores it in his elegant, insightful documentary, 'Ingrid Bergman: In Her Own Words.' Drawing upon Bergman's extensive diary entries, personal letters, a treasure trove of home movies (many shot by Bergman), vintage interviews, and the revealing perspectives of her four children, Björkman paints a fascinating, dimensional portrait of a complex, ceaselessly driven woman determined to live life to the fullest.

Different than most movie star biographies that rely on film clips, superficial testimonials, and salacious gossip, 'Ingrid Bergman: In Her Own Words' allows its subject to tell her own story. Oscar winner Alicia Vikander provides narration in Bergman's voice, which lends the documentary an intimacy and warmth similar profiles lack. Examples of Bergman's work are included, but the focus remains squarely on the woman, not the actress, so the carefully chosen snippets show off specific aspects of her personality and talent.

And yet acting, and Bergman's passion for it, drive the film. ("If you took acting away from me, I would stop breathing," she once wrote.) Haunted by a tragic childhood (she lost her mother before the age of 3 and her father as a preteen, as well as several close relatives), Ingrid felt compelled to make something of herself, and when she caught the acting bug, she pursued the profession with a single-minded passion that often superseded romantic and family relationships. The early personal losses also inspired her to live in the moment and, largely, for herself. With gusto and a deep sense of purpose, she tried her damnedest to squeeze as much as she could out of a storied and, at times, controversial existence. She made bold, sometimes impulsive choices and always moved forward, never pausing for reflection or regret.

All of her children wish they had more time with her. Due to acting commitments, Bergman was often away for lengthy periods during their formative years and she died of cancer at the relatively young age of 67. Her oldest daughter, Pia Lindström, the only child from her first marriage to Swedish neurosurgeon Petter Lindström, didn't see her mother for several years due to a bitter custody battle and Bergman's persona non grata status in America after she abandoned her family for Rossellini. Pia, rightfully, expresses dismay over her mother's seeming indifference to her children (although she never doubts her love), but the Rossellini brood - Roberto, Isabella, and Ingrid - are more philosophical about the long absences, and shade their comments with melancholy rather than ire.

That lack of anger, though, over some of Bergman's faults and actions slightly taints the film. Björkman and his subjects go to great lengths to analyze and dissect Bergman and her motivations, but they stop short of criticizing her or sharing any negative experiences. Instead, they passively accept her shortcomings. The charming, idyllic home movies that are so full of life and packed with shots of adorable children and carefree episodes, and the excerpts from Bergman's diary and letters that outline her insecurities and fears deeply humanize this Hollywood icon, but they don't give us the full picture. We only hear about happy times and struggles. Dark episodes are avoided, as are discussions of her marriages and what caused all three of them to unravel. "I've gone from saint to whore and back to saint again, all in one lifetime," Bergman wrote, but the film doesn't fill in the blanks of the gray area in between as fully as we might like.

Yet despite that minor deficiency, we still come away with a full-bodied, dimensional portrait of a hard-working actress and unpretentious, earthy woman who perhaps loved her profession more than anything else in her life. More film clips would document her versatility (it's a shame her Oscar-winning work in 'Gaslight' and 'Murder on the Orient Express' is not represented), but they would also alter the tone of this highly personal, reverential film.

Björkman masterfully assembles the material, balancing artistry with a documentarian's sense of purpose and truth. Rare clips, such as Bergman's luminous silent screen test for producer David O. Selznick and behind-the-scenes footage shot on the set of 'Joan of Arc,' as well as private moments with her three husbands, beautifully reconcile the lofty actress with her down-to-earth wife-and-mother alter ego, and enhance our appreciation of both. The interviews are also varied and natural, spanning different locations and languages, which somehow makes them seem more authentic.

And authentic is arguably the best adjective to describe Ingrid Bergman. This superior documentary honors that aspect of her character and salutes a brave woman who blazed a fascinating trail. Anyone who loves her - and who doesn't? - will be utterly absorbed by this sensitive, perceptive portrait that comes closer to revealing the real Ingrid Bergman than any other film. 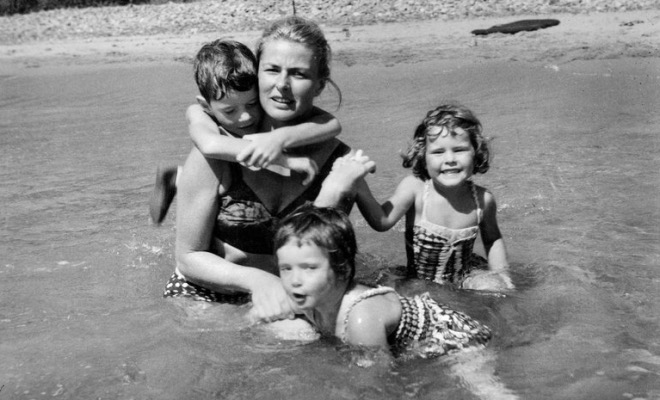 'Ingrid Bergman: In Her Own Words' arrives on Blu-ray packaged in a standard Criterion case. A 16-page fold-out booklet featuring an essay by film historian and archivist Jeanine Basinger, a couple of rare photos, and transfer notes is tucked inside the front cover. Video codec is 1080p/AVC MPEG-4 and audio is DTS-HD Master Audio 5.1. The narration is in Swedish, although most of the film clips and interviews are in English. Once the disc is inserted into the player, the static menu with music immediately pops up; no previews or promos precede it.

With so many different film stocks, material that spans many decades, and a combination of color, black-and-white, film, and television footage, crafting a seamless transfer would appear to be almost impossible, and yet Criterion has fashioned a superb rendering that beautifully weaves together all the different elements. The 1080p/AVC MPEG-4 transfer remains faithful to its source material, honoring the various grain structures, degrees of clarity, and individual idiosyncrasies to create a cohesive whole. Some sequences are breathtakingly crisp (Bergman's silent, Technicolor screen test for David O. Selznick is jaw-droppingly gorgeous), while others flaunt an antiquated charm that heightens the film's warmth and sense of nostalgia. Home movies are often difficult to reproduce, but the 8mm and 16mm footage looks surprisingly detailed and vibrant (thanks to new 4K and 2K scans), allowing us to fully absorb intimate family moments. The contemporary interviews look natural and unpretentious, and the various visual effects Björkman often employs lend the image a striking edginess that keeps the film fresh and vital. No nicks or scratches dot the print (unless they already exist on vintage clips), and no digital anomalies could be detected. An actress as ravishing as Bergman deserves a top-flight transfer to properly reflect her beauty, and thankfully Criterion gives us just that.

The multi-lingual DTS-HD Master Audio 5.1 track features narration in Swedish by Alicia Vikander and some comments in French and Italian from Bergman and her children, but most of the interviews and film clips are in English. From start to finish, the sound is clear and perfectly modulated, with no level changes occurring during source material shifts. Surround activity is limited to the scoring, which is distinguished by fine fidelty and tonal depth, and a wide dynamic scale allows it plenty of room to breathe. All the interview remarks, film clips, and narration are easy to comprehend, even though some of the vintage material sounds a bit rough and shrill. Once again, the sheer volume of old and new audio sources makes creating a balanced mix a challenge, but this track manages them all  and serves them all quite well.

Several supplements enhance our enjoyment of this stellar documentary,

Few documentaries of classic stars provide a more intimate perspective than Stig Björkman's 'Ingrid Bergman: In Her Own Words,' which may be why this engrossing chronicle of one of the world's most talented and beautiful actresses resonates so strongly. Culled from marvelous home movies, extensive diary entries, scads of personal letters, and clips from Bergman interviews over the years, this comprehensive profile allows us to see the woman behind the famous roles and better understand her driving ambition and controversial choices. Revealing interviews with all four of Bergman's children enhance this portrait, which brims with artistry and warmth. Criterion's Blu-ray presentation features top-notch video and audio transfers, as well as several excellent supplements. If you're a Bergman fan, this is a must-own release, but any film aficionado will be captivated by this frank yet reverent documentary. Highly recommended.

Sale Price 20.96
List Price 39.95
Buy Now
3rd Party 26.95
In Stock.
See what people are saying about this story or others
See Comments in Forum
Previous Next
Pre-Orders
Tomorrow's latest releases