It's not surprising 20th Century-Fox adapted the Anastasia legend into an animated feature in 1997, because it turns out the story of an orphaned drifter who discovers she might be a Russian princess really is a fairy tale after all. One of the world's most fascinating yet preposterous mysteries was finally solved in 2009 when DNA testing conclusively identified the remains of Anastasia, the young Romanov princess who was executed by a firing squad after Bolshevik rebels toppled the royal regime of her father, Tsar Nicholas II, during the 1918 Russian Revolution. Yet because Anastasia and her brother were not buried in the same grave as the rest of their family (and no one would discover the location of their remains for several decades), a legend persisted that the princess somehow escaped execution and vanished into thin air. Over the next decade or two, several women came forward claiming to be Anastasia, the most notable of whom was Anna Anderson, and it is her story - largely fictionalized - that forms the basis of director Anatole Litvak's opulent 1956 film, 'Anastasia.'

Anderson's checkered story is difficult to tell because so many inconsistencies cloud it, but screenwriter Arthur Laurents ('Rope,' 'The Way We Were') skirts that dicey issue by adopting a clever tongue-in-cheek tone that suits the frothy material and allows audiences to interpret Anderson's actions in their own way. Intellectuals certainly will view her as an imposter, while romantics can connect enough dots to justify her flimsy claim. Because Anastasia's fate was still in limbo in 1956, an air of mystery continually swirled about her, and that fascination fueled the film, adding an intriguing is-she-or-isn't-she element that heightened suspense. (Anderson often struggles with identity issues in the movie, but in actuality she tirelessly fought to be officially recognized as Anastasia, and her court case dragged on for 30 years.) Of course, thanks to the miracle of science, we now know Anastasia really did die in 1918, so today, the story lacks bite and relevance. Instead of wondering whether a bedraggled, unbalanced woman is really a princess, we now view Anna through a more cynical lens, and the perspective is far less interesting.

When we first meet Anna (Ingrid Bergman) in Paris in 1928, she's lost, destitute, and mentally unstable, suffering from bouts of amnesia, depression, and malnutrition. Her resemblance to the young Russian royal, however, is striking, so a trio of opportunists led by former Russian general Sergei Bounine (Yul Brynner) tap her to impersonate Anastasia. The businessmen don't care if she's the original; all they want is a "reasonable facsimile" who can walk the walk and talk the talk of a genuine Romanov. If Sergei can properly train Anna and convince Anastasia's exiled grandmother, the Dowager Empress Maria Feodorovna (Helen Hayes), she's the real deal, they can claim the princely sum of 10 million pounds that was left in a British bank by the dead Tsar. They must do so, however, before the statute of limitations on the money expires, and that date looms on the horizon.

Anna, at first, is reluctant to participate in the scheme, but her deteriorating health, hopeless prospects, and nagging doubts about her heritage convince her to proceed, and with the magnetic, forceful Sergei to guide her (he acts as both Svengali and Pygmalion), Anna learns a great deal. Yet she also seems to recall intimate details about people and events that only Anastasia would know, which stuns Sergei and impresses the Russian expatriate community. As Anna's reputation slowly grows, even Sergei begins to believe she actually might be the real Anastasia, and much like Henry Higgins, he becomes amazed by and attracted to the creature he has created. The strain of the ordeal, however, begins to take a toll on Anna, who's more confused than ever about her identity - as well as her burgeoning feelings for Sergei - and worries she may be rejected by the Dowager Empress, the final arbiter in her quest for recognition.

Shot on location in Paris, England, and Copenhagen, 'Anastasia' exudes a lush, exotic feel. There's plenty of pageantry, color, and European flair, all of which fill the CinemaScope screen. Yet despite a gallery of excellent portrayals, most notably Bergman's emotional, Oscar-winning turn as the tortured Anna, a stiffness and sterility often stymie the story. The love between Anna and Sergei never fully blossoms, and the whole movie feels like one big build-up to one big scene - the confrontation between the insecure Anna and crusty Dowager Empress (an episode that never occurred in real life). It's a doozy of a sequence, packed with tension and heartbreak, and both Bergman and Hayes play it to perfection, but it's not potent enough to sufficiently bolster what is otherwise a lightweight confection.

Brynner is a commanding, macho presence, and the manner in which he dictates how Anna should act and behave calls to mind his turbulent relationship with another Anna in the Oscar-winning role that would define his persona - the King of Siam in Rodgers and Hammerstein's 'The King and I,' produced immediately prior to 'Anastasia.' (Brynner would also appear in Cecil B. DeMille's 'The Ten Commandments' in 1956, capping off what would be the finest year of his film career.) Hayes is equally riveting, although reportedly she was quite dissatisfied with her portrayal, and Martita Hunt (best known for playing the creepy Miss Havisham in David Lean's definitive adaptation of Charles Dickens' 'Great Expectations') supplies welcome comic relief as the Dowager Empress's flighty lady-in-waiting.

At 40, Bergman is too old for the role (the real Anastasia would have been about 26 at the time), yet she carries the picture with a poignant, inspiring performance that deserved all the accolades heaped upon it. Perhaps her work resonates so deeply (several moments are disarmingly raw) because she could intimately identify with Anna's loss of identity and efforts to reclaim it. The beloved star of 'Casablanca,' 'Notorious,' and 'The Bells of St. Mary's' fell from grace seven years earlier when she abandoned her husband and young daughter to begin a torrid affair with Italian director Roberto Rossellini. Though today no one would bat an eye at such behavior, back in 1949 American social and political mores were under a microscope, and as a result, the Bergman-Rossellini liaison became a cause célèbre that rocked the foundation of Bergman's career and sent her into exile in Europe. Unbelievably, she was even formally denounced on the floor of the U.S. Senate by Senator Edwin C. Johnson of Colorado, who called her a "free-love cultist," "powerful influence for evil," and "Hollywood's apostle of degradation."

Bergman was persona non grata in America for several years, and Fox took a big risk casting her in 'Anastasia.' (If the film had been produced in Hollywood, it's doubtful Bergman would have been allowed to play the title role.) As the release date neared, the studio braced itself for a backlash. "Twentieth Century-Fox thought I was box office poison," Bergman wrote in her autobiography, "[and] anything they put me in would be destroyed, banned, and thrown out of America." TV host and gossip columnist Ed Sullivan went a step further, conducting a controversial (and utterly ridiculous) poll that asked the public whether Bergman should remain banished or be permitted to return to the U.S.

Thankfully, cool heads prevailed, and when 'Anastasia' premiered, all was instantly forgiven. The Oscar cemented both Bergman's comeback and her victory over narrow, judgmental minds, and she quickly resumed her position as a top cinema draw. Unlike the doomed Russian princess, Bergman survived the firing squad and ultimately emerged triumphant. So even if 'Anastasia' no longer has relevance beyond its impeccable production values and performances, it stands as the film that gave Bergman back to her adoring fans and the industry she consistently elevated.

And that's no fairy tale. 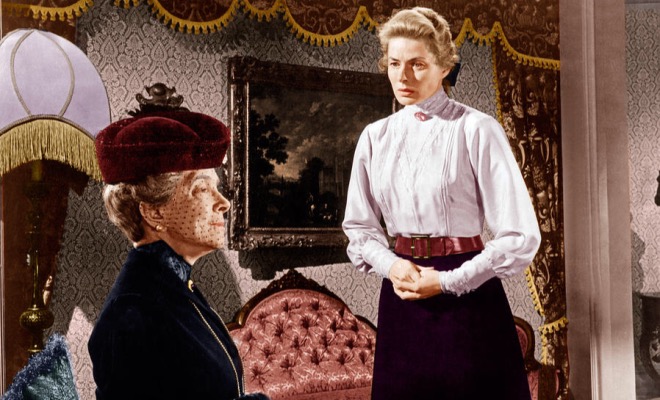 The 1956 version of 'Anastasia' arrives on Blu-ray in a limited to 3,000 edition packaged in a standard case. An eight-page booklet featuring an essay by film historian Julie Kirgo, several scene stills, and a reproduction of the movie's poster art is tucked inside the front cover. Video codec is 1080p/AVC MPEG-4 and default audio is DTS-HD Master Audio 5.1. Once the disc is inserted into the player, the static menu without music immediately pops up; no previews or promos precede it.

For years, 'Anastasia' looked as ragged and rundown as Anna Anderson in the movie's opening scenes, but this spiffy remastering has restored both vibrancy and luster to this majestic motion picture. The 1080p/AVC MPEG-4 transfer from Twilight Time (by way of Fox) bursts with lush, vivid hues that resemble Technicolor. (Rarely have I seen single-strip color look so luscious.) Reds are especially well saturated, but primaries across the board appear fresh and true. Rich black levels enhance the image, while crisp whites nicely balance it, and excellent shadow delineation makes even nocturnal scenes come alive. (Crush is blissfully absent.) Only the faintest amount of grain is visible, but the picture still exudes a warm, film-like feel, and no nicks, specks, scratches, or other random imperfections dot the pristine source material. Contrast and clarity are superb, background details are easy to discern, and though close-ups are sparingly employed in CinemaScope movies, Bergman's loveliness still shines through. Fans of 'Anastasia,' of which there are many, should be thrilled with this terrific rendering that completely revitalizes this 60-year-old film.

Two soundtrack options are available - a remastered DTS-HD Master Audio 5.1 track and a DTS-HD Master Audio 2.0 track that replicates the original theatrical experience. Both supply rich, full-bodied sound that fills the room with ease, but the 5.1 mix provides a bit more nuance and shading, especially with regard to Alfred Newman's Oscar nominated score. Though the rear channels lend the music more power and presence, their impact is minimal during the rest of the film. Pronounced stereo separation complements the CinemaScope framing, while a wide dynamic scale wards off any hint of distortion and gives the score plenty of room to breathe. All the dialogue is clear and easy to comprehend, and no age-related imperfections, such as hiss, pops, and crackles, muck up the works. This film is all about pageantry, and the robust audio lends it an appropriately majestic aura.

Many of the supplements from the 2003 Fox Studio Classics DVD release have been ported over to this Twilight Time edition. The big exception is an episode of the 'Biography' TV series focusing on Anastasia herself.

With the discovery of the real Anastasia's remains, the intriguing mystery that forms the crux of 'Anastasia' has fizzled. And yet the truth somehow sets Anatole Litvak's film free to become the fairy tale its screenwriter always intended it to be. Wildly romantic and bursting with colorful pageantry, this eye-filling drama chronicling one woman's identity crisis and the efforts of a trio of con men to put her over as a Russian princess is loosely based on fact, but the fictional elements of Arthur Laurents' script resonate more strongly. A lack of substance and nagging stuffiness often stifle the movie, but its core audience won't care. The selling point isn't history, but a bravura, Oscar-winning performance from the always lovely Ingrid Bergman, as well as excellent work by Yul Brynner and Helen Hayes. Twilight Time's Blu-ray presentation may skimp on supplements, but features beautifully restored video and audio that enliven the film even during its slow moments. Like a Russian winter, 'Anastasia' always leaves me a bit cold, but Litvak's assured direction, the fine portrayals, and top-notch production values, as well as the disc's technical merits, make this limited edition release easy to recommend.