Franz Kafka and Woody Allen seem like a perfect fit. The wildly imaginative novelist with a penchant for the absurd consistently explored themes Allen would later examine in both his comic and dramatic films. Guilt, paranoia, anxiety, and existentialism permeate Kafka's works and often consume the characters in Allen's movies (they're also core components of Allen's own screen persona), but never so completely than in 'Shadows and Fog,' which directly - and deftly - references Kafka while paying stylistic homage to the German Expressionist movement that flourished during the 1920s. Beautifully photographed in black-and-white and boasting an impressive cast of past Oscar winners and notable personalities, this comedy-thriller initially captivates, but loses focus about halfway through and eventually peters out, leaving us bemused and a bit at sea.

The plot takes place over the course of a single evening and largely concerns Max Kleinman (Allen), a mild-mannered nebbish who's awakened from a nightmare by a riled up band of townspeople intent on capturing an elusive serial killer who stalks the streets in search of unassuming victims. Kleinman reluctantly agrees to become a pawn in their deadly plan, but the mob dissipates before he can join their ranks, leaving him astray and in fear. Kleinman continually tries to find them so he can figure out what's expected of him, but his desperate attempts unwittingly entangle him in the police investigation. Soon the hunter becomes the hunted, and in his attempts to evade the angry cops (and later an angry mob), Kleinman stumbles upon a variety of offbeat characters. Those include Irmy, a female sword-swallower from the circus (Mia Farrow) who desperately wants to marry her unfaithful lover (John Malkovich) and have a child; a gaggle of boisterous prostitutes (Lily Tomlin, Kathy Bates, and Jodie Foster among them); his sourpuss fiancée (Kate Nelligan); his bitter ex-fiancée (Julie Kavner) whom he jilted at the altar; a workplace rival (Wallace Shawn); and a flamboyant magician (Kenneth Mars).

Moments of eerie suspense and sober introspection dovetail with madcap comedy punctuated by a plethora of Allen's clever one-liners. It's all kind of a hodgepodge supported by a flimsy narrative that veers off into too many vague areas, but if you don't think too much and just go along for the ride, 'Shadows and Fog' is an enjoyable (and occasionally stimulating) experience. True to Kafka's spirit, finding the film's point (if there is one) is akin to finding a needle in a haystack. Lots of potent themes are bandied about as the circuitous plot becomes increasingly more bizarre and surreal, but none of them really stick. (Maybe a more accurate title for this pastiche would have been 'Smoke and Mirrors.')

One thing, however, is undeniable: few of Allen's films are as visually hypnotic and poetic, and that aspect alone makes 'Shadows and Fog' worth seeing. With customary reverance and a keen eye, Allen salutes German cinema icons like F.W. Murnau and Fritz Lang, almost instantly evoking the mood and look of such Weimar classics as 'Nosferatu' and 'M.' (He even incorporates the vigilante theme that runs through the latter movie into his story.) But the artistry doesn't stop there. Though it takes place in Eastern Europe, 'Shadows and Fog' was entirely shot at the Kaufman-Astoria Studios in Queens, New York, where the picture's production team constructed an impressive Old World set that Allen twists and turns like a Rubik's Cube to suit various scenes, maintaining a delicious sense of claustrophobia throughout, but without ever breaking the illusion. More than usual, Allen seems to pay particular attention to the movie's mise-en-scène, which might account for the film's hefty price tag. 'Shadows and Fog' stands as Allen's most expensive motion picture to date, but its beauty justifies the cost.

Allen cleverly strings us along, teasing us with big ideas and incisive wit, but ends up promising more than he seems willing or able to deliver. At first, 'Shadows and Fog' seems like a brilliant parody laced with serious undertones, but as it progresses the script becomes more farcical. As a result, the film loses its edge and becomes more of an enigma, albeit an entertaining one. Delightful moments abound, but the ending is so innocuous, it makes us wonder if we missed something...or maybe the joke has been on us all along.

Which is it? Like Kafka, Allen buries the truth. Repeat viewings may yield the answer, which undoubtedly lies somewhere within those forboding shadows and that murky fog. 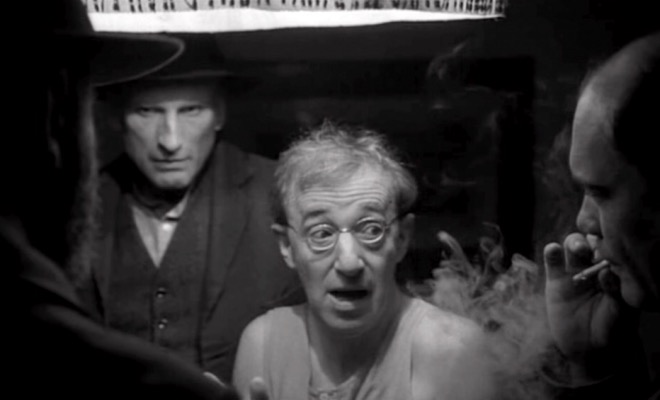 'Shadows and Fog' arrives on Blu-ray in a limited to 3,000 edition packaged in a standard case. An eight-page booklet, which includes an essay by Twilight Time's resident historian, Julie Kirgo, as well as several photos, is tucked inside the front cover. Video codec is 1080p/AVC MPEG-4 and audio is DTS-HD Master Audio 1.0. Once the disc is inserted into the player, the static menu without music immediately pops up; no previews or promos precede it.

Shadows and fog aren't easy elements to depict on screen, but the 1080p/AVC MPEG-4 transfer from Twilight Time beautifully renders them while honoring the striking black-and-white cinematography of long-time Allen collaborator Carlo Di Palma. Though a few speckles dot the print from time to time, the source material is generally clean and vibrant, allowing all the Expressionistic touches to achieve maximum impact. Contrast, which is such an essential component of this type of photography, is top-notch, while rich, inky black levels lend the image a gorgeously lush feel. A modicum of grain heightens the fog's presence and adds welcome grit to the tale's darker aspects. Shadow delineation is superb, silhouettes are sharp, and background objects are easy to discern.

'Shadows and Fog' features far more close-ups than other Allen films - many of them extreme - and all of them highlight facial features, hair strands, and stage makeup well. Costume fabrics also exhibit plenty of texture, as do the columns and cobblestones that adorn the set. No noise or pixelation afflicts the picture, and any digital enhancements have been judiciously applied. 'Shadows and Fog' is a sumptuous visual feast and this superior transfer does it proud.

Allen always compiles a stimulating soundtrack of background music that perfectly complements the on-screen action and themes, and the DTS-HD Master Audio 1.0 track transmits the instrumentals by Kurt Weill with plenty of fidelity and tonal depth. Excellent clarity and dynamic range also distinguish the audio, which exhibits no distortion or surface noise. Subtle atmospherics nicely punctuate the eerie quiet that permeates exterior scenes, and all of Allen's witty dialogue is well prioritized and easy to comprehend. This isn't a particularly active track, but it's smooth, well modulated, and unobtrusive, enhancing the narrative without overwhelming it.

Typical of Woody Allen home video releases, only a couple of negligible supplements are included on the disc.

Lush photography, stark atmosphere, and a gallery of eccentric characters distinguish Woody Allen's 'Shadows and Fog,' but this star-studded homage to German Expressionism and the paranoid existentialism of Franz Kafka never quite maximizes its potential. Allen layers his madcap story with suspenseful undertones and peppers it with his trademark wit, but the narrative ultimately fizzles, leaving us scratching our heads and pondering the film's purpose. Twilight Time's Blu-ray presentation features strong video and audio transfers, but no supplemental material. Though visually stunning and often fascinating, 'Shadows and Fog' lacks the emotional resonance that permeates Allen's best films, yet its impressive cast and seductive style make this noble artistic experiment still worth a look.