Legendary director Richard Lester (How I Won the War, Juggernaut) joins former members of The Goon Show to create a series of comic sketches about a post-nuclear apocalyptic London: a girl is 17 months pregnant, a father turns into a parrot, a man becomes a chest of drawers and another man - a bed sitting room. The unbelievable cast includes Dudley Moore (Arthur), Peter Cook (Bedazzled), Ralph Richardson (The Fallen Idol), Rita Tushingham (The Knack… and How to Get It), Spike Milligan (Life of Brian), Michael Hordern (A Funny Thing Happened on the Way to the Forum) and Roy Kinnear (Help!). This Hilarious masterpiece was nominated for the Golden Berlin Bear (Best Film) at the 1969 Berlin Film Festival and was beautifully shot by award Winner David Watkin (Out of Africa, Chariots of Fire).

"Have we forgotten the bomb?"

Absurdity can be a good thing every once in awhile. For most movies a simple plot point such as the nuclear annihilation of Britain, for example, proves to be fertile ground for a wellspring of hilarity. While most movies need to follow a traditional three-act narrative structure in order to be a success, some movies on the other hand only need to revel in the randomness of an event in order to be a truly and strangely hilarious comedy. Richard Lester's 1969 film 'The Bed Sitting Room' proves to be a wildly disjointed, completely absurd comedy about the last twenty or so people living in England after World War III.

"God save Mrs. Ethel Shroak, Long live Mrs. Ethel Shroak, God save Mrs. Ethel Shroak." It's not that Mrs. Ethel Shroak (Dandy Nichols) is actually the queen of England, it's just that she happens to be the next in line of succession after an atomic bomb wiped out the whole of England including all of Parliament as well as the royal family. As The BBC (Frank Thornton) lets the residents know on the fourth anniversary of the war, the conflict was the shortest war in history, lasting only two minutes and twenty-eight seconds up to and including the signing of the peace treaty. Now, the twenty or so survivors of the war wander the wastelands picking up bits of discarded shoes, digging up false teeth, or in the case of Nurse Arthur (Marty Feldman) informing people that they are in fact dead… even if they don't know it yet.

As Father (Arthur Lowe), his wife (Mona Washbourne), and their daughter Penelope (Rita Tushingham) ride around the tube lines in the last operating underground train, the rest of the population is left to toil above. Poor Electricity Man (Henry Woolf) is required to peddle a stationary bicycle in order to keep the power on. The slightly deranged Shelter Man (Harry Secombe) lived out the war in a radiation bunker looking at old films is going mad and is shocked to discover the changed world above, and Sergeant (Dudley Moore) and Inspector (Peter Cook) keep the peace in their hot air balloon made of an old police car. As the rest of English society goes about their daily lives, they have to maintain an awareness of radiation exposure which as it happens is in the process of mutating Lord Fortnum of Alamein (Ralph Richardson) into a living, breathing bed sitting room complete with papered walls, curtains, and a fireplace. 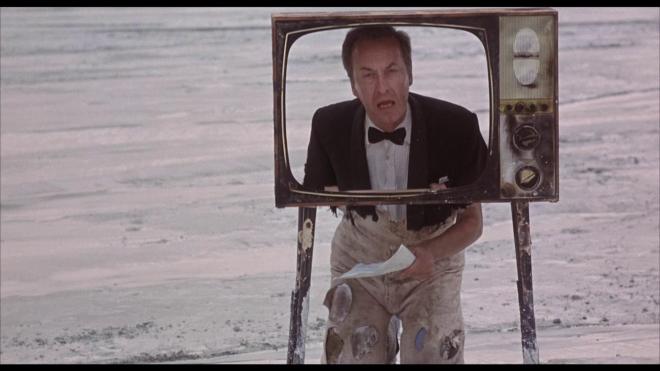 Really, when it comes down to it, all you need to know about what type of comedy 'The Bed Sitting Room' is going to be is stated at the 01:40 mark where the cast of the film is listed in order according to height. That brief and odd credit moment proves to be a silent setup for the rest of the film. If you're not at the very least chuckling a little bit by that notice, then I fear that 'The Bed Sitting Room' is just not going to be your particular brand of comedy. Similar to watching something of the more crazy and obscure skits from 'Monty Python's Flying Circus.' The whole film is completely random with only the thinest of plot threads to hold anything together.

As this film is an adaptation of a stage play by Spike Milligan and John Antrobus, I can only imagine what it would have been like to see this thing performed live. As a film, 'The Bed Sitting Room' is perhaps one of the strangest comedies I've come across. It's a movie that I find hilarious, but at the same time, I know this isn't a movie that I can grab just anyone and force them to sit down and watch it with me. Aside from my wife, I can perhaps think of only a dozen people at most who would even remotely find this film even the slightest bit funny. But, I guess that's the nature of comedy, one man's Daffy Duck is another man's Donald Duck.

When it comes down to it, 'The Bed Sitting Room' is one of those movies that I suggest everyone give it a chance, at least, ten or fifteen minutes. If you can get through The BBC's news report as he kneels in the mud and speaks through the husk of a television screen while wearing only the upper half of a tuxedo jacket, I think you'll be in great shape for enjoying the rest of the film. If you have a hard time getting through that much, then 'The Bed Sitting Room' just isn't going to be your movie. I loved it myself, but then again this is my brand of comedy. The weirder and more random the better.

'The Bed Sitting Room' arrives on Blu-ray courtesy of Kino Lorber and their Studio Classics line. Pressed onto a Region A locked BD25 disc and housed in a standard Blu-ray case, the disc opens directly to the film's main menu.

'The Bed Sitting Room' features a pretty strong 1.66:1 1080p transfer. While this doesn't look to be a very recent master, there is some evidence of edge enhancement here and there, the results are still very good. Detail levels are alive and well thanks to a noticeable amount of film grain ensuring that an organic look is maintained. Colors are a bit muted and drab considering the film looks to have been shot in an abandoned rock quarry. Primaries are present but don't quite exhibit a lot of "pop" to them. Flesh tones also skew slightly pink at times as reds appear to have been boosted. Black levels are the real strength here allowing for some rich inkiness to create a sense of depth to the image. The film print this was struck from has a little bit of wear and tear on it in the form of fine scratches and little nicks, but nothing too distracting or serious. All around for a back catalogue title that's nearly fifty years old, and hasn't seen much restoration effort in that time, there isn't a lot to complain about.

'The Bed Sitting Room' comes with a decent DTS-HD MA 2.0 audio track. Since imaging wasn't much of a priority, this is a pretty flat, front and center audio track. Dialogue is clear most of the time, but there are a few moments where the film's score by Ken Thorne can be a bit too intrusive making it difficult to hear what is being said. Not that this ruins any plot points because there really isn't much of a plot, but some good jokes can get lost unless you're listening really carefully. Levels seem to be on par as there really isn't ever any need to adjust your volume from one shot to the next. The track is thankfully free of any hiss or age-related anomalies. This is a pretty good track, but if you want the fullest experience with it, make sure you're paying attention!

'The Knack… and how to Get It' Trailers From Hell: (HD 3:00) Director Allan Arkush looks back at the film from Richard Lester, it's a fun but brief little remembrance piece.

While I will say that I honestly and thoroughly enjoyed watching 'The Bed Sitting Room,' I know it's not a movie for everyone, so to that end, I would suggest you make sure you're a big fan of absurdist comedy. If you like your humor completely random with little to no plot, you should have a great time with this one. Kino Lorber has done a great job bringing the film to Blu-ray with a very strong video presentation, a serviceable audio track, and some half-way decent extra features. I'm calling this one recommended.

Sale Price 19.89
List Price 29.95
Buy Now
3rd Party 12
In Stock.
See what people are saying about this story or others
See Comments in Forum
Previous Next
Pre-Orders
Tomorrow's latest releases