What do you get when you combine three of Hollywood's most hysterical talents with a creaky old castle and a werewolf legend? An "amiable, kinky blend of high jinks an horror" (The Hollywood Reporter) that'll leave you howling with laughter! Starring Gene Wilder, Gilda Radner and Dom DeLuise, this "ingenious, amusing horror comedy [will] put a smile on your face - and keep it there" (Los Angeles Times)!

At the mansion of his Great Aunt Kate (DeLuise), Larry Abbot (Wilder) is undergoing a psychological procedure designed to rid him of his irrational phobias... by frightening them right out of him! But the jolts and frights may turn out to be the least of his problems when Great Kate names him her sole heir. Suddenly, the entire family seems a little too vigorous in participating in his "scare-apy," - leading Larry to believe that one of his jealous kin may be murderous... and that another may be werewolverous!

"I don't know, Kate. He told me he was coming up this afternoon. I thought sure he'd be here in time for dinner."

"One of my dresses is missing. Has he been at it again?"

It's always a bit difficult for me to revisit a favorite film from my childhood. As an adult, I worry that the movie in question might not have aged well and it was just fun when I was young. It's especially difficult when the star and director of the film recently passed away. Such is the case with Gene Wilder's 1984 film 'Haunted Honeymoon.' Not only was it the last film Gene Wilder directed, it also holds the somber distinction of being Gilda Radner's final film before her own death in 1986. While being a slightly disjointed comedy at times, when the film works it's hilarious and is an impressive showcase of onscreen talent.

Radio show superstar Larry Abbot (Gene Wilder) is at the peak of his career. He's one of the biggest radio actors in Manhattan and he's the star of the highest rated mystery radio show in the entire country. On top of that, he's set to marry the love of his life and co-star Vickie Pearle (Gilda Radner). With everything seemingly going perfectly for the man, Larry is actually having a lot of trouble during the suspenseful climaxes of his recent shows. At the end of one episode, he started crying. During his latest episode about a deadly werewolf he laughed uncontrollably. The only man with any idea what is going on with Larry is his uncle the esteemed psychiatrist Dr. Paul Abbot (Paul L. Smith). It would seem that Larry is scared of something, causing his fits and uncontrollable mood swings, and that the only way to cure him is to scare him to death!

With a trip to his Aunt Kate's (Dom DeLuise) mansion for the wedding, Larry hopes his marriage to Vickie surrounded by his family including cousin Charles (Jonathan Pryce), his uncle Francis (Peter Vaughan) and his cousin Montego (Jim Carter) will help him relax and end the on-air hijinks. What Larry doesn't expect is to be subjected to a terrifying form of shock treatment by his family. However, after the disappearance of Francis Jr. (Roger Ashton-Griffiths) and the sighting of a werewolf in the area, the prescribed treatment for Larry's mental maladies could be far more lethal than anyone expects! 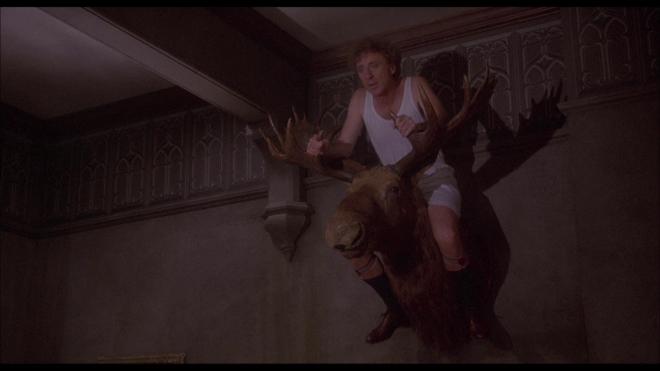 It's actually a bit difficult to dictate how and why 'Haunted Honeymoon' is both a rousing comedic success and a bit of an odd dud in Gene Wilder's career. When the movie hits, it's gut-busting hilarious. When it misses, it feels like a series of failed gags that should never have left the editing room. And because these moments come and go so rapidly it can be a bit hard to feel like you've got a handle on what is going on with the plot. By extension, because the plot can be more than a bit confusing, with several unanswered plot threads, a number of the jokes fail to resonate, as they feel like they reference scenes that didn't make the final cut. Are we watching a comedy? Are we watching an Abbott and Costello inspired horror-comedy? Is this film actually a throwback to James Whale's horror films of the 1930s? Wait, is this movie suddenly a musical now? There are a lot of plot devices and comedic ideas tossed in the air and you can sort of feel Gene Wilder struggle to juggle them all. But, as I said before, when this film works, it's comedy gold.

Why I feel this film has such an "iffy" reputation is two-fold. On one side the cast looks to have only been given a rough outline of a scenario to work with, leaving some of the more creative comedic actors to improve their lines and reactions while the other actors sort of stand around and try to keep up. Sometimes this approach works beautifully, other times the film feels like someone hit the breaks and all comedic momentum is lost. Compounding that issue is the clunky editing. The front end of the film works great. The setup is there, there are some great gags to get the film going and we start to understand Larry's fear issues. Then we get to the middle stuff with Larry's eccentric extended family. There are so many incredibly talented individuals on the screen it's hard to give them all their just desserts so certain characters go long periods of time without appearing on screen making you wonder why they're even in the movie at all. That said, when they are on screen, they're giving it their all and it's pretty fantastic stuff.

Where this movie holds a special place in my heart is because second to 'Conan The Barbarian,' this is the movie I rented most from the local mom and pop video store when I was a kid. Looking back at the film I can see why I loved it so much. It featured Gene Wilder delivering another fantastic deadpan comedic performance. It had Gilda Radner effortlessly slinging one fast wisecrack after another. And it also had the always hilarious Dom DeLuise dressed as an elderly woman and whenever he's on screen he steals the entire show. Then you have the moment when Dom DeLuise and Gilda Radner stop the entire film to do a duet of "Balling the Jack." On top of that, it plays with classic horror movie tropes and I still love these elements of the film even if they don't fully fuse together as they should. Watching 'Haunted Honeymoon' now that Gene, Gilda, and Dom have all passed away can be a bit of a melancholy feeling. It's always sad to see such amazing talent go, but what they've left behind is a carnival of comedic hits and I'm glad that a movie like 'Haunted Honeymoon' exists because it's one of the few times such great talent came together. The movie itself may be a tad mediocre, but that doesn't mean you won't be laughing through most of it!

'Haunted Honeymoon' arrives on Blu-ray courtesy of Kino Lorber and their Studio Classics label. Pressed onto a Region A BD25 disc, the disc is housed in a standard Blu-ray case. The disc opens directly to a static image main menu with traditional navigation options.

Even though the artwork on this Blu-ray indicates that the film has been given a new HD remaster, the results of this 1.85:1 transfer can be a bit underwhelming. When the film looks good, it's beautiful, when it's on the rougher side of things, colors can look a bit bleached and contrast can have some odd spikes. Film grain has been retained throughout and gives rise to some great details throughout the entire film. As I previously mentioned colors can be a bit inconsistent. During the radio show set opening, everything looks bright, natural, with great looking primaries. Once the film moves to Aunt Kate's mansion is when some of the troubles start. One shot can look fantastic and consistent with the opening of the film and the very next shot can appear overly bright, washed colors, and diminished black levels. To that point, Black levels are also a bit touch and go. In one shot they can be deep and inky and provide a great sense of shadow separation and dimension. The next shot blacks can look almost brown and lose that sense of depth. Thankfully the print sourced for this transfer is in excellent condition without any notable speckling, scratches or other damage. All that said, 'Haunted Honeymoon' has never looked all that amazing on disc. The previous MGM DVD was a bit of a muddy mess and this Blu-ray is a big improvement. It may not be as great as fans were hoping for, but it's still pretty good.

'Haunted Honeymoon' arrives with a solid English DTS-HD MA 2.0 audio track. Dialogue sounds great and comes through with a nice natural quality to it. Scoring by John Morris pulls out the classic horror movie stylings and helps keep the mood. The purposefully heightened and exaggerated sound effects give the audio some nice LFE moments while also adding some great atmospherics. I would like to go into more detail about the sound effects and the particular way they sound, but that is actually a plot device and to explain it would be a bit of a spoiler so take my word for it, they're supposed to sound that way. This is a clean audio track without any hiss or age-related issues to report.

While 'Haunted Honeymoon' may not have been Gene Wilder's greatest directorial effort, it's still an old favorite of mine that manages to put a smile on my face all of these years later. Plus you have great turns from Gilda Radner and Dom DeLuise to keep your sides in stitches. Kino Lorber has brought the film to Blu-ray in good order. The video presentation may be a bit lacking for some but it's a marked improvement over the DVD. The audio track shines and delivers the goods. Extras are a collection of trailers. Fans of the film will want to make room on their wish list, but if you're new to the film give it a look first. It may not be your brand of hilarity. Worth a look.

Sale Price 10.07
List Price 29.95
Buy Now
3rd Party 16.75
In Stock.
See what people are saying about this story or others
See Comments in Forum
Previous Next
Pre-Orders
Tomorrow's latest releases