Eurocult icon Paul Naschy (Frankenstein's Bloody Terror) stars as a criminal gang leader who undergoes a radical surgery in Juan Fortuny s 1973 thriller Crimson. When a jewel heist goes awry, Jack Surnett (Naschy) and his fellow thieves take shelter at the home of a scientist experimenting in brain replacement. Through the surgical finesse of the doctor s wife (Silvia Solar), Surnett is restored to health, but suffers irresistible pangs of bloodlust and conventional lust as well after the brain of a criminal known as The Sadist (Roberto Mauri) is grafted onto his own.

"Leave me alone, my brain is torturing me. I can't seem to control it!"

It's a bummer when you're delivered a movie with a great concept that completely fails to deliver. You can get ready to sit down to watch a particular movie, you may even pop some popcorn or pull a good beer from the fridge for the occasion and all of that effort to set up the perfect viewing scenario could go to waste. Unfortunately, this was the case with Juan Fortuny's 1973 Eurocult thriller 'Crimson,' also known as 'The Man With The Severed Head.'

The perfect jewel heist was planned right down to the smallest detail by famed thief Jack Surnett (Paul Naschy) and his men. The alarm system was knocked out from the safe, so all they had to do was crack the thing and take off with the goods. Unfortunately for Surnett, one of his greedy underlings had his eyes on a diamond necklace and sets off the alarm when he tries to pinch it for himself. With the cops called to the scene, Surnett is wounded during the getaway. After suffering extreme blood loss and what would be a fatal wound, Surnett's men turn to Doc Ritter (Carlos Otero) who brings in his associate the mad scientist Professor Teets (Ricardo Palmerola) and his wife Ana (Silvia Solar) onto the case. X and his wife Ana just so happen to be the leading authorities in the field of brain transplants! While Surnett may not need a new brain, he'll need parts of one, and the best candidate is a criminal known as the Sadist (Roberto Mauri). With parts of the Sadist's brain taking control of Surnett's body, the once great jewel thief is reduced to his base instincts with an insatiable lust for blood and women!

Head transplant or brain transplant flicks are almost a sub-genre unto themselves. With great titles like 'Donovan's Brain,' 'The Atomic Brain,' 'The Brain That Wouldn't Die,' and 'The Incredible Two-Headed Transplant,' 'Crimson' or as it's known in Europe as 'The Man With The Severed Head' should have fit right in. Unfortunately, the movie strives to be a Eurocult exploitation movie in the vein of an Italian Giallo film and shortchanges the monster. While Paul Naschy is certainly a lot of fun as Surnett/The Sadist, there isn't a whole lot for him to do in this retelling of 'Frankenstein.' Most of the film he's laying about on a hospital bed with a wad of surgical bandages covering his head with tubes hanging out all over the place. it doesn't help any that the two names given to this film are also misleading. There is very little blood to call a film "Crimson" and the man in question doesn't have a severed head, merely part of another man's brain. 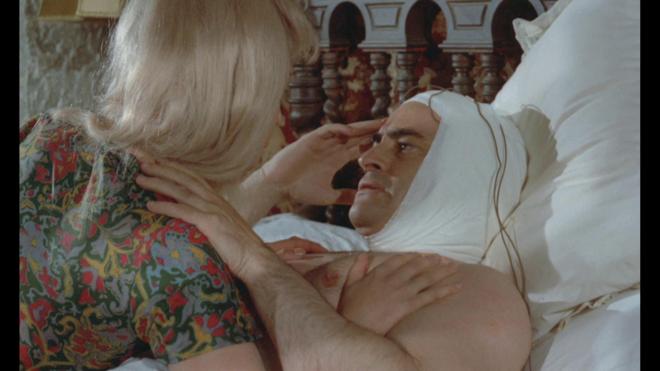 What is particularly interesting about this film are the differences between the two cuts. The English dubbed 'Crimson' which runs at 89 minutes is a leaner and grittier drive-in monster flick. More focus is kept on the mad scientist being forced to operate on Surnett and the outcome of that experiment. On the other hand, the French version, 'The Man With The Severed Head' runs nearly ten minutes longer and plays like a sexy goofball cartoon with a lot more sex. Where 'The Man With The Severed Head' tries for some sense of edginess with the added softcore sex, it actually inadvertently adds a lot of humor. None of these sequences add anything and they appear to have been last minute additions because the edits are so choppy that the actors suddenly go from being clothed to nude to clothed again. This sloppy editing is especially apparent towards the end when Surnett/The Sadist goes on his rampage.

Taken as a whole, 'Crimson' was the stronger, more character-driven version of the film, but either way you slice it, both cuts are pretty weak. On one hand the film is trying to play like an exploitation monster movie but on the other hand, it's trying to be a thriller with The Sadist's men trying to find their employer. The two dueling storylines never mesh in a satisfying way and the film starts to feel too long. Neither cut goes for broke with their respective content. It isn't gory, it isn't sexy, it's just silly. If you're in the mood for a cartoonish Eurocult movie, 'Crimson' should deliver the fun, but if you go into this movie with any expectations for quality, you're likely to be left disappointed by the end.

'Crimson' arrives on Blu-ray thanks to Kino Lorber and Redemption. Pressed onto a Region A BD50 disc, the disc is housed in a standard Blu-ray case and opens to a static image with an opening menu option available allowing viewers to select which cut of the film you want to see. The audio commentary is only available for the English language version.

Considering the age and stature of 'Crimson,' I suppose we should be glad to be getting it on Blu-ray at all, but this new 1080p 1.66:1 transfer leaves a lot to be desired. While fine film grain is retained, a lot of this film as shot with a very soft focus so a number of details like set design, makeup, and facial features don't have the crisp clarity one would normally expect to see. Colors are also all over the map without any real primary presence. One moment the colors look clean and even, the next they look too bright as if contrast was needlessly kicked up, and the next everything looks too dark and washed out as if the filmmakers attempted a day-for-night shot but botched it. All of these detrimental effects look to have been baked into the original elements of the film source and don't appear to be a result of any tinkering during the HD transfer processes.

Both the English language and the original French language audio tracks are given rather rough around the edges Dolby Digital 2.0 audio mixes. Hiss and pops stand out and are a near-constant companion for both tracks. There aren't any serious dropouts, so that's one notch in the positive. regardless which version you're watching, both the English and French tracks have an inorganic feel to the dialogue as if it was recorded much later than the original filming. Dialogue is intelligible throughout, but it tends to sound like someone talking into a tin can. Music also has a tinny quality to it that can overpower the rest of the mix and is just too jaunty for a movie of this kind. Both tracks get the job done, but they're hardly impressive examples.

Audio Commentary: Film Historian Richard Harland flies solo for this track as he covers only the toned down English version. It's a solid commentary, he's a fountain of information and provides a lot of detail about the making of the film and the various major players.

'Crimson' isn't going to be a movie for everyone, to say the least. Even film fans who subsist on a steady diet of schlock and exploitation cinema may have a hard time digesting this one. It just doesn't come close to living up to its potential and neglects all of the better elements that make Eurocult movies the fun flicks that they are. Kino and Redemption have done the best job they could with this Blu-ray release, but the A/V presentation is limited to the condition of the source and at best it can be called problematic. Thankfully there is a very interesting and informative audio commentary that fans of the film should greatly enjoy. This one really is for the fans as newcomers will probably have a tough time getting much fun out it.

Sale Price 15.93
List Price 29.95
Buy Now
3rd Party 15.93
In Stock.
See what people are saying about this story or others
See Comments in Forum
Previous Next
Pre-Orders
Tomorrow's latest releases