Blu-ray: Recommended
3 Stars out of 5
Sale Price 13.58
Buy Now
3rd Party 8.59
Temporarily out of stock. We are working hard to be back in stock. Place your order and we’ll email you when we have an estimated delivery date. You won’t be charged until the item ships.
Release Date: November 24th, 2015
Movie Release Year: 1971
Release Country: United States
COLLAPSE INFO -

What do you get when a mad scientist grafts the head of a maniac onto the body of a giant? A true cult classic that the Los Angeles Times calls "lots of fun"! When a brilliant yet obsessive surgeon is cast out by the medical community, he takes science to a shocking new level - by grafting the head of one man onto the body of another. But his terrifying two-headed creation escapes the lab and goes on a rampage! Cult director Anthony M. Lanza (The Glory Stompers) directed the original 2-headed monster classic featuring a script by James Gordon White (The Hellcats) and James Lawrence (The Loners) and a stellar cast that included Bruce Dern (Coming Home), Pat Priest (TV s The Munsters) and broadcasting legend Casey Kasem (American Top 40). This special edition is re-mastered in HD and features audio commentary by the RiffTrax® trio and ex Mystery Science Theater 3000 legends, Mike Nelson, Kevin Murphy and Bill Corbett. 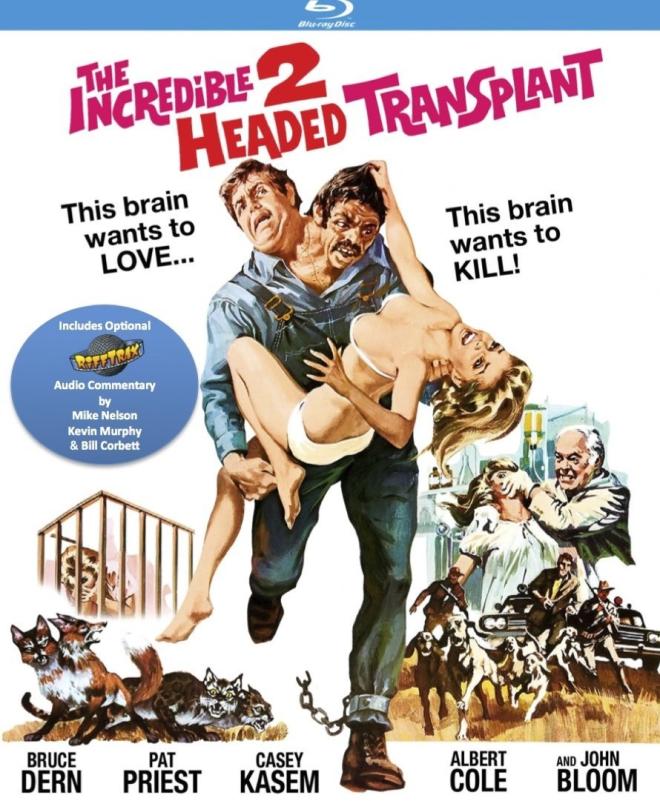 When you read the titles of some movies, you know instantly what you're getting yourself into. Some films are so on the nose with their title that they actually put a lot of pressure on themselves to live up to prescribed expectations. 'The Incredible Two-Headed Transplant' is exactly one of those movies. Directed by Anthony M. Lanza and starring Bruce Dern, Pat Priest, and Casey Kasem, 'The Incredible Two-Headed Transplant' lives up to its title in a big way and is incredibly entertaining if you're willing to shut off your brain and let the fun happen.

Disgraced doctor Roger Girand is stuck researching his life's work from home after a breakdown at the hospital he worked at caused him to be fired. With his assistant Max (Berry Kroeger), Roger has kept himself busy perfecting a procedure he believes will change the face of modern medicine. What is that procedure? Transplanting the head of a person onto another body! After succeeding with a snake and a monkey, Roger and Max are ready to move to human trials. While Roger's friend Ken (Casey Kasem) has his trepidations, he can't help but be impressed with Roger's results - even if those results mean alienating his wife Linda (Pat Priest).

After the murderous lunatic Manuel Cass (Albert Cole) escapes from the insane asylum, he finds himself at Roger's home. After knocking Roger out and taking Linda hostage, Roger and Max hunt the crazy killer down, fatally wounding him with a shotgun blast to the gut. Thankfully for Roger and Max, Cass didn't die right away giving them just enough time to harvest his living head.

But where are they going to get a viable body? It just so happens Roger has a gardener named Danny (John Bloom) where an accident left him with the mind of a child. Since Manuel killed Danny's father, Roger and Max get it in their heads that no one will miss Danny if he suddenly disappeared. So why not stick the head of psycho-killer on the neck of a 6'6" giant with incredible strength? What could possibly go wrong? It turns out, a whole lot can go wrong and Roger, Ken, and Max are going to have to clean up the mess before the cops figure out what's going on. 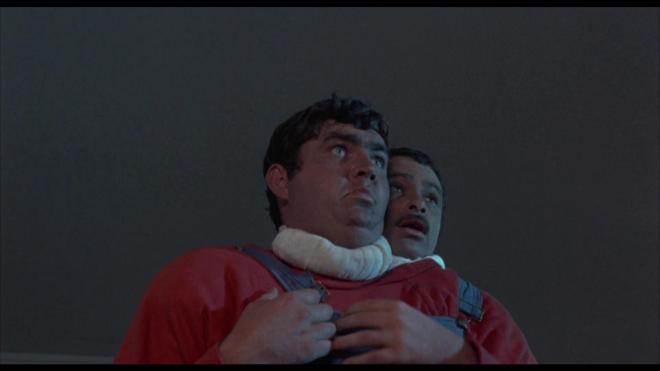 'The Incredible Two-Headed Transplant' is one of those movies where the title tells you everything you need to know before you see it. Right away you should have a clear idea if you're going to love it or hate it. If you're someone that digs on movies like 'Frogs' or 'Food of the Gods' or movies like 'Snakes On A Plane' then you should be all set for this one. If this doesn't sound like your favorite brand, I'd suggest you search out your entertainment options elsewhere.

As a movie unto itself, 'The Incredible Two-Headed Transplant' is an absolutely stupid movie - in a good way. So much of this movie hinges on it fully embracing its true nature that if the film had let up in the camp in any way or failed to deliver on its concept, it would have been a terrible disappointment. When you see John Bloom lumber around with Albert Cole's head over his shoulder, you're either going to shut off the movie immediately or you're going to get a big smile on your face.

So much of the fun comes from the fact that Bruce Dern is left to carry this movie so completely straight, it's easy to forget that this actor has been nominated for several Oscars and has been in some incredible works of cinema. That's also so much of the fun here, he's fully committed in his part as a deranged doctor that he's not letting the goofy content of the script slow him down in the least. Then you have the intimate portrayal of Albert Cole and John Bloom as the titular monster. In order for the effect to be convincing, the two are constantly shot in close-up and it's just silly to see. Hopefully, you're laughing when you see this because I think that was the intention the entire time.

Is 'The Incredible Two-Headed Transplant' a great work of art? Not even close. Is the movie a solid source for some good-natured fun to be enjoyed with some close friends who like their movies silly and entertaining throughout? You bet. This is just one of those movies where you let your brain shut off the moment you put the Blu-ray in the player and just let the magic happen. If you think about this movie, you're just going to hurt yourself, and potentially the other head that may have been surgically attached to your neck.

'The Incredible Two-Headed Transplant' arrives on Blu-ray thanks to Kino Lorber and their Studio Classics line and is pressed onto a Region A locked BD25 disc. Housed in a standard case, the disc opens to the film's static main menu as the theme song plays over it. 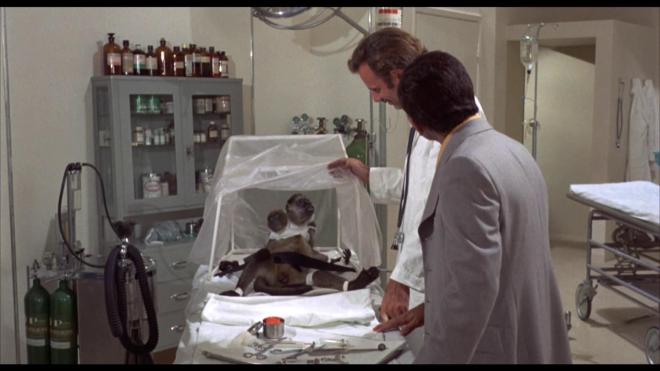 For a cheap no-frills production, 'The Incredible Two-Headed Transplant' makes a fine jump to Blu-ray with this 1.85:1 1080p transfer. One could almost say it's a successful transplant to HD! Okay, I'll stop now. Film grain has been retained and creates a nice film-like appearance throughout offering plenty of fine details to appreciate. Colors are bright and vivid with plenty of primary pop. Colors may push the reds a bit leaving flesh tones looking a bit pinkish at times, but otherwise they're stable. Black levels are strong and inky with only a couple small moments of notable crush. The only real knock against this presentation is that there are a few notable instances of print damage, cigaret burns, cut frames, and a few moments of staining pop up throughout the film's run. All around this is a transfer that should please the fans. 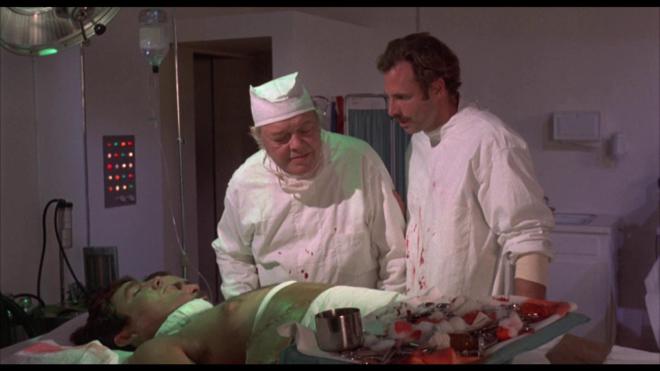 'The Incredible Two-Headed Transplant' arrives with a rousing and resonant DTS-HD MA 2.0 audio track. Dialogue comes through crisp and cleanly - although there are a few moments where it's a bit difficult to hear because Bruce Dern likes to mumble his lines. John Barber's funky early 70s score along with the sound elements and dialog have plenty of space to occupy and allow the track to sound present and real. As a stereo track, there is only some subtle imaging on display as there isn't a lot of active channel movement or a sense of directionality. In order to hide a lot of the film's effects, Barber's score kicks in and keeps the scene's audio active and lively. To that end, levels are spot on and well balanced as there is never a need to adjust the volume. A pretty decent audio track for such a lively and fun movie. 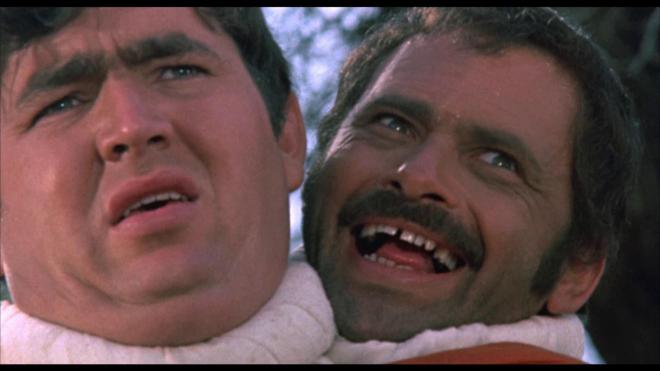 Rifftrax Commentary: Former Mystery Science Theater 3000 stars Mike Nelson, Kevin Murphy and Bill Corbett give this movie a thorough going over. If you're a fan of Rifftrax or MST3k - this track alone is worth the price of the disc. Sure, the movie itself is a bit of low-hanging fruit, but Mike, Kevin, and Bill give it a thorough and entertaining savaging - any moment Casey Kasem was on screen or lending his voice for a radio announcement, these guys had me in stitches. Considering they've also gone after movies like 'Night of the Lepus' and 'Kingdom of the Spider' - my hope is that this Blu-ray release of the main film with their commentary track attached signifies a deal to get some of those other movies Rifftrax has taken on onto Blu-ray as well!

Interview With Screenwriter James Gordon White: (HD 9:08) The screenwriter offers his insights into the creation of the movie and how he came to work on the production. It's a sadly brief interview that I wish was longer - or if the man had been given the chance to record his own commentary track.

Radio Spot: (1:02) I love it how movies used to be marketed on the radio - that's a practice I'd love to hear come back in an earnest way.

Original Theatrical Trailer: (HD 2:14) I'm amazed the trailer is as long as it is! Did they really need to explain what this movie is to sell it to a target audience? A 30 second shot of the poster would have done the job! 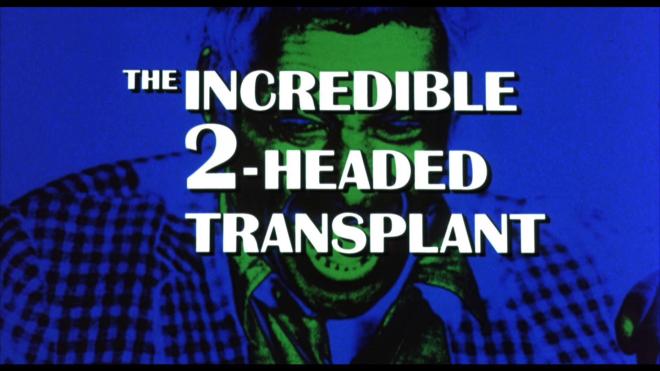 As a life-long lover of purposefully bad cinema, it doesn't get much better than 'The Incredible Two-Headed Transplant.' This movie is a riot from start to finish and Kino Lorber has done right by fans with this Blu-ray release. Featuring an impressive A/V presentation, they've also included the Rifftrax commentary track for the film making it an incredibly valuable extra feature unto itself. I'm left with no choice but to call this one recommended for no other reason that this Blu-ray offers up a lot of fun.

Sale Price 13.58
Buy Now
3rd Party 8.59
Temporarily out of stock. We are working hard to be back in stock. Place your order and we’ll email you when we have an estimated delivery date. You won’t be charged until the item ships.
See what people are saying about this story or others
See Comments in Forum
Previous Next
Pre-Orders
Tomorrow's latest releases