The Brain That Wouldn't Die

Medical science leaps light years into the future in this "great, absurd movie" (The Psychotronic Encyclopedia of Film) that explores the strange world of transplants, cloning and mutant regeneration. Strangely relevant in today's ethically challenged world, this presents a truly psycho-surgery case and is "one of the great sci-fi sleaze classics" (Starlog).

When Dr. Bill Cortner loses his sweetheart, Jan, in a car accident, he refuses to give up hope for her life. Scooping up her decapitated head, he brings it back to the lab for resuscitation. But keeping her head alive is one thing – finding her a new body is quite another. So while the mad doctor is out looking for spare parts, she's stuck at home going out of her mind – literally! And nothing will stop her from getting revenge on the man who is keeping her as a trophy girlfriend!

As far as movie titles go, Joseph Green's 'The Brain That Wouldn't Die' ranks one of the best. It's straightforward, to the point and directly digs into the heart of the plot. No frills or fancy wordplay feigning some superfluous literary pretentiousness. And it definitely doesn't hide some cryptic design demanding moviegoers to invoke a deeper meaning that goes unanswered by the film itself, proving it utterly absurd and ineffectual. (Looking right at you David Frankel and your ridiculously titled 'Collateral Beauty.') Nope, there's none of that here. This 1962 sci-fi gem of delicious B-movie badness pretty much announces to its unsuspecting audience precisely what they are about to witness. "There is a this brain, you see, in the head of a once-beautiful woman, decapitated during a car accident. And well, she just refuses to die, plotting her revenge from a blood-goo-filled tray!" Sure, I'm gushing over something others might find silly, but it's not often a movie's title is this blunt and matter-of-fact. It deserves a bit of praise. But moving along.

Much like its title, Green's film, which he cowrote with Rex Carlton ('Blood of Dracula's Castle,' 'Hell's Bloody Devils'), waste little time in jumping directly into its subject matter. While in the middle of a critical surgery, we are introduced to the god-complex arrogance of Dr. Bill Cortner (Jason Evers), a man who believes he's discovered how to save lives with his renegade medical procedures and abnormal transplant experiments. During the operation, our protagonist waxes on and on about the role of medicine and social responsibilities of doctors with the lead surgeon and his father, who's currently busy messaging the heart of the nameless patient being successfully revived by his son's unorthodox procedure. Perhaps in a family of doctors, this is the appropriate place for arguing opposing philosophies and social viewpoints. It sure makes holiday get-togethers a more pleasant experience and no one argues at Thanksgiving dinner. It's all really silly and laughable, but the whole scene at least gets the ball rolling without delay. 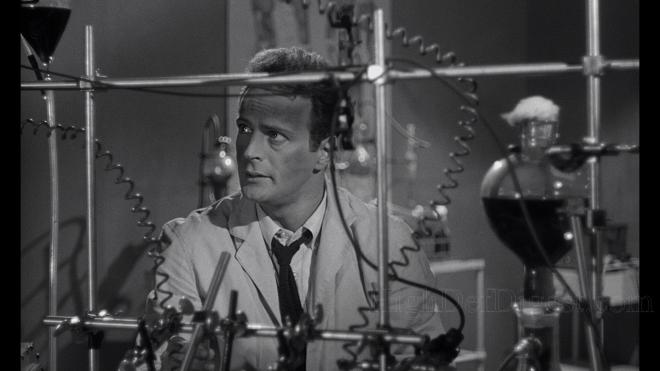 More importantly, the exchange between these two, whom we presume probably behave more professionally outside a surgical room, is surprisingly perceptive. Chalk up some unexpected bonus points for Dr. Bill — a great title for a medical TV show if there was one! — for pointing out several insightful observations on the unintentional contradictions against science, its advancements and any conflicting ethical concerns. Of course, as would be anticipated in a script that essentially takes its morality from Mary Shelley's 'Frankenstein,' our protagonist eventually proves to be his own worst enemy when driving like a maniac to his family’s country house, causing a wreck that decapitates his fiancée Jan Compton (Virginia Leith). In that moment, the minute-ago intelligent and talented doctor commits a pair of felonies by running away from the scene of a car accident and carrying his girlfriend's head wrapped in a suit jacket while rushing to the basement of the country house like Gollum tightly gripping his precious.

With already so much unintended hilarity taking place within the first twenty minutes, it's difficult to imagine 'The Brain That Wouldn't Die' could ever top itself or the horrifying, gruesome suspense already on display. But it does! Dr. Bill and his crippled, Igor-like assistant, the menacingly named Kurt (Leslie Daniels), revive Jan's head. But, oh no, it can only survive for 48 hours for no apparent medical or scientific reason other than an excuse for the obsessively lovelorn doctor to hastily find a new sexy and voluptuous body to attach the head, which miraculously regains the ability to see, speak and feel fairly quick. And what better place to find the perfect specimen for playing Frankenstein than aimlessly haunting neighborhoods, randomly attending a swimsuit beauty contest and peeping at a burlesque show where Bill inadvertently causes a catfight between two dancers vying for his attention.

And once again, Green and Carlton surprise with subversive notions of sexual objectification as oppose to loving someone in spite of their physical appearance, or lack thereof. These sentiments are brought to the forefront more clearly when Bill decides college friend Doris Powell (Adele Lamont) has what he desires most, seducing her with promises of plastic surgery and kind words about beauty being only skin deep. Hiding beneath its low-production value and unintentional hilarious B-quality badness, there is a thoughtful sci-fi feature that remains just as entertaining as ever.

Shout! Factory brings 'The Brain That Wouldn't Die' to Blu-ray under the distributor's Scream Factory line. The Region A locked, BD50 disc is housed inside the normal blue case. At startup, the disc goes to a generic menu selection on the bottom of the screen with a static photo of the cover art on the right, full-motion clips on the left and music playing in the background.

The brain refuses to die on Blu-ray with a generally satisfying 1080p/AVC MPEG-4 encode that gives the sleazy sci-fi B-favorite a new lease on life.

Remastered to its uncut version from some undisclosed negative, the new high-def transfer is the best the movie has ever looked on any format, showing that the source has aged extraordinarily well. However, keeping it from a higher score are several instances of discoloration and some minor damage from moisture. Cue marks appear in the top left corner a couple times, along with vertical lines.

On the other hand, these minor defects due to age only give the movie a drive-in quality while the 1.66:1 image awash with a thin layer of natural grain a welcomed film-like feel. And the biggest area of improvement is a brighter and better-balanced contrast, showing brilliant, crisp whites. Brightness levels also benefit from the jump to HD, providing true, accurate blacks without sacrificing the finer details in the shadows. The video displays excellent definition and resolution. Bill's instruments, medical devices and other scientific-looking tools are clear and precise. We can plainly make out the tiniest crease and stitch in the clothing while facial complexions are shockingly revealing, exposing every pore, wrinkle and blemish in the cast.

Sadly, the DTS-HD MA mono soundtrack doesn't quite live up to the surprising quality of the video, assuming the audio track was also remastered from the same source.

From the opening moments, Abe Baker and Tony Restaino's menacingly sinister score blasts with a noticeably narrow and confined sense of presence. Of course, coming from a monaural design, the movie isn't expected to move much from the center of the screen, but the lossless mix also doesn't offer much differentiation within the midrange with everything sounding pretty flat and uniform. This becomes problematic in several sequences that come off somewhat bright and reveal a tad of distortion during the loudest moments. There is also a good amount of hissing in the background, and there isn't any bass to speak of. Still, the overall quality is a strong improvement over previous editions with clear, intelligible dialogue throughout.

The aptly named 'The Brain That Wouldn't Die' is delightfully fun and entertaining B-movie schlock with brains when given the time and chance. Much like the wickedly twisted moral of the story, the 1962 sci-fi gem is a great example of beauty being only skin deep. On the surface, it's all hilarious badness, but beneath its cheesy low-budget exterior hides a thoughtful and perceptive soul. The Blu-ray courtesy of Scream Factory arrives with a shockingly excellent picture quality and a slightly imperfect audio presentation. Although it could benefit from more supplemental enhancements, the overall package is a treasure in anyone's cult collection.

Sale Price 92.73
Buy Now
3rd Party 88.74
In Stock.
See what people are saying about this story or others
See Comments in Forum
Previous Next
Pre-Orders
Tomorrow's latest releases