A stagecoach stop employee and a stranded woman traveler find themselves at the mercy of four desperate outlaws intent on robbing the next day's gold shipment. Cinematography by Milton R. Krasner (All About Eve, An Affair to Remember).

Say the title 'Rawhide' in idle conversation and most film fans will think you're referring to the 1960s TV series that put actor Clint Eastwood on the map. But almost a decade before the small screen 'Rawhide' premiered, director Henry Hathaway ('Niagara') helmed a big screen western noir with the same name. The first 'Rawhide' doesn't focus on a lengthy cattle drive; instead, it takes a more claustrophobic tack as it chronicles a tense day at a remote Arizona stagecoach station that's overrun by a vicious gang of violent marauders. Taut, exciting, and brimming with smoldering undercurrents, 'Rawhide' is a colorful, entertaining popcorn thriller that delivers on a variety of fronts.

Tyrone Power stars as Tom Owens, an Eastern boy who's been learning the ropes of the mail business for a few years from Sam Todd (Edgar Buchanan), the crusty manager of the Rawhide Pass outpost, which also serves as a stagecoach stop along the San Francisco-to-St. Louis route. Tom is scheduled to return home soon, but his trip could be delayed due to the jailbreak of ruffian Rafe Zimmerman (Hugh Marlowe) on the eve of his execution. Cavalry officers inform Sam and Todd that Rafe and three fellow convicts (Dean Jagger, Jack Elam, and George Tobias) have already held up a stagecoach and killed its driver, and now plan to hijack a gold shipment that's scheduled to pass through Rawhide the next day. As a precaution, the Cavalry plans to escort and protect the stagecoach on which Vinnie Holt and her two-year-old niece are passengers. The law, however, prohibits children from traveling on a stagecoach that ventures into harm's way, so against her will, Vinnie and her niece are removed from the coach and must wait out the crisis at Rawhide.

Of course, not long after the coach leaves, Zimmerman and his band of killers arrive at Rawhide and hold Tom, Sam, Vinnie, and the toddler hostage while they await the arrival of the gold shipment. And over the course of the next several hours, tensions mount between both the convicts and the hostages, nerves fray, myriad confrontations ensue, and violence breaks out as Zimmerman tries to keep his henchmen in check while Tom and Vinnie plot an escape.

The western locale provides a tough, edgy backdrop for the power struggles that fuel this crackling tale, but 'Rawhide' is far from a traditional western. In many ways, much like 'The Ox-Bow Incident,' another intimate drama set in the West, it more closely resembles a film noir. Twisted obsessions, duplicity, and domestic tensions predominate as the characters navigate the depot's cramped confines and fight for survival. Screenwriter Dudley Nichols ('Stagecoach') favors human conflicts and interpersonal dynamics over big action scenes, and the result is a visceral, no-frills battle between good and evil.

Hayward, the only woman in the cast, asserts herself from the get-go, standing up to the rough, pushy males with her trademark defiance. Far from a shrinking violet or helpless damsel in distress, Hayward takes charge, following in Barbara Stanwyck's footsteps as a headstrong, physical dame who gets down and dirty and fully partners her male counterpart. That counterpart is Power, and as the mild-mannered assistant who steps up to the plate after his mentor is murdered, he doesn't try to upstage her, instead remaining true to his role. Western heroes rarely admit they're afraid, but Tom does, and Power uses that vulnerability to his advantage. He and Hayward reportedly didn't interact much during shooting, and though they may lack chemistry, their intensity saves the day.

And without a first-rate supporting cast, 'Rawhide' would be a far less successful film. Hugh Marlowe, best known as holier-than-thou playwright Lloyd Richards in 'All About Eve,' makes a terrific villain, while the always reliable Dean Jagger and George Tobias complement him well. But it's Jack Elam as the wild-eyed, salivating Tevis who makes the biggest impression. A last-minute replacement for Everett Sloane, whom Hayward reportedly had fired after he was overly rough with her during the shooting of an early scene, Elam seems to relish every smirk, leer, and outrageous quip, and he grabs attention whenever he's on screen.

'Rawhide' can't compete with classic westerns like 'The Searchers,' 'Red River,' or 'Rio Bravo,' but it's efficient, engrossing, and well executed. And that's about all you can ask of a piece of escapist entertainment. It may be a second-tier western, but it's a first-class film that still captivates today. 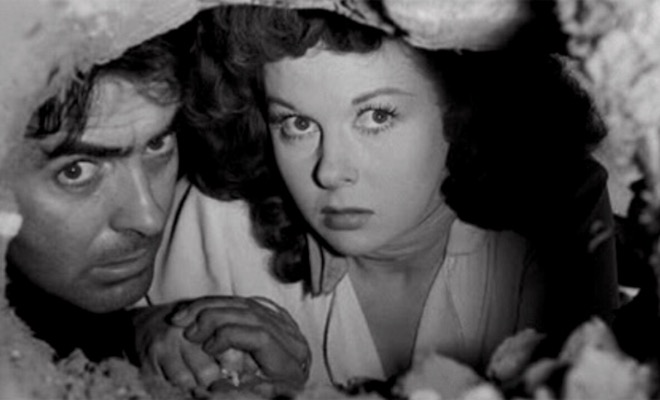 'Rawhide' arrives on Blu-ray packaged in a standard case. Video codec is 1080p/AVC MPEG-4 and audio is DTS-HD Master Audio 2.0. Once the disc is inserted into the player, the static menu with music immediately pops up; no previews or promos precede it. Although the packaging lists the running time as 75 minutes, the film actually runs 87 minutes.

'Rawhide' isn't one of Fox's banner titles, but it receives a nice high-def rendering here. Excellent clarity and fine contrast distinguish the 1080p/AVC MPEG-4 transfer, which sports a natural grain structure that maintains the look of celluloid. Some print damage - in the form of minor nicks and a couple of small blotches - remains, but the image is largely vibrant and sports a pleasing freshness that belies its advanced age. Lush black levels provide essential weight, and solid gray scale variance enhances the film's texture. Close-ups are razor sharp, highlighting the scraggly beards and weathered faces of the bandits, as well as Hayward's creamy complexion and Power's ruggedness. Though other black-and-white transfer exude a glossier feel, this one honors its windswept Western roots and does its narrative proud.

The DTS-HD Master Audio 2.0 mono track is free of any age-related defects, such as hiss, pops, and crackles, and provides a robust soundscape for this tense drama. Sol Kaplan's music sounds rich and full, and a wide dynamic scale handles all of the score's highs and lows with ease. Sonic accents, such as gunfire and whip cracks, are crisp and distinct, and dialogue is well prioritized and easy to comprehend. Like many tracks of the period, this one complements the narrative without overshadowing it, and it's been nicely remastered for this release.

All the extras from the 2008 DVD have been ported over to this Blu-ray release.

Fans of westerns and film noir will find 'Rawhide' an enjoyable diversion, thanks to a lean, absorbing story, taut direction, and spirited performances from Tyrone Power, Susan Hayward, and a host of terrific character actors. The tale of a gang of thieves who invade a remote transfer station along the stagecoach line and hold its skeleton crew hostage grabs our attention from the opening frames and rarely lets up. Kino Lorber's Blu-ray presentation features solid video and audio transfers and a few interesting supplements that add context and perspective to the film. Classics aficionados will surely appreciate this well-made, little-known western that deserves to be rediscovered. Recommended.

Sale Price 17.99
List Price 29.95
Buy Now
3rd Party 17.98
In Stock.
See what people are saying about this story or others
See Comments in Forum
Previous Next
Pre-Orders
Tomorrow's latest releases