Newly Re-mastered in HD! "This movie will scare the daylights out of you", warned the LA Herald-Examiner upon the release of Panic in Year Zero - and with good reason. Released just before the Cuban Missile Crisis, this chiller-thriller realistically details what might happen to the survivors of a nuclear attack. Screen legend Ray Milland (X: The Man with the X-Ray Eyes) leads a superb cast that includes Jean Hagen (The Asphalt Jungle) and Frankie Avalon (Dr. Goldfoot and the Bikini Machine). Harry Baldwin (Milland), his wife (Hagen) and their two teenaged kids, Rick (Avalon) and Karen (Mary Mitchell, Dementia 13) are heading to the mountain from Los Angeles for a weekend of fishing as they see a mushroom cloud forming over the L.A. skyline. With the highways and towns jammed by panicking motorists, rampaging looters, heavily armed survivalist and doped-up punks, Milland and his family decide to head to the shelter of their fishing spot, awaiting more news about nuclear disaster. Featuring gorgeous black-and-white cinematography by Gilbert Warrenton (The Man Who Laughs) and top-notch direction by Ray Milland (A Man Alone).

We don't often think of doomsday films as universally appealing, but 'Panic in Year Zero!' somehow fits that unique profile. The low-budget exploitation flick takes a frightening end-of-the-world scenario and combines it with action and suspense, family bickering and bonding, dog-eat-dog desperation, and a beguiling cheesiness to produce a thoroughly entertaining - and relatable - popcorn movie. It's just serious enough to make us sit up and take notice, but never somber and morose like more high-minded treatments that shamelessly parrot an anti-nuke platform. Though director and star Ray Milland makes sure the cautionary message comes through loud and clear, it's tempered by a tense narrative that focuses more on the survival of a family and how a nuclear attack changes them than government policy and regretful hand-wringing.

Released on the heels of 1962's Cuban Missile Crisis, which stoked the fears and paranoia of a public not yet ready to confront the realities of nuclear warfare, 'Panic in Year Zero!' predates 'Mad Max' by almost two decades, yet gives us a road warrior family hellbent on surviving a holocaust by any means necessary. As the film opens, Harry Baldwin (Milland), his wife Ann (Jean Hagen), and their two teenage kids, Rick (Frankie Avalon) and Karen (Mary Mitchel), pile into the family car and head for the hills outside Los Angeles for a relaxing fishing trip. But an hour or so beyond the city's quiet suburban confines, a few blinding flashes of light, distant rumbling, and a telltale mushroom cloud signal the detonation of nuclear missiles, much to the Baldwins' horror. Harry instantly envisions danger and chaos, and shifts into survivor mode, stockpiling food and water and harnessing weaponry to steel himself and his family against civilization's impending collapse.

Violent confrontations ensue as the Baldwins embark on an odyssey that tests their mettle, resolve, and nerves. As L.A. residents recklessly flee, flooding the roadways and desperately foraging for supplies, the Baldwins make a beeline for an isolated hiding place where they can hopefully hole up and wait out the crisis. Yet vicious thugs, rabid looters, and other obstacles stand in their path, quickly transforming this mild-mannered family into a tough, suspicious gang of trigger-happy gun-toters willing to defend themselves at all costs in the hope of weathering the storm and rebuilding their shattered lives.

Produced by American International Pictures, 'Panic in Year Zero!' flaunts an appropriate bargain-basement feel that ties in nicely with the film's gritty, world-gone-mad storyline. The nuclear attack occurs only minutes into the movie, and then it's off to the races, with plenty of action and confrontations keeping us engaged. It's all a bit frenzied and over the top - the jazzy music score by Les Barker lends many scenes a weird 'Batman'/'Beach Party' vibe and the fake-looking exterior sets often recall TV's 'Lost in Space' - but somehow everything hangs together, thanks mainly to the natural performances and realistic family dynamics.

Milland won a Best Actor Oscar 17 years earlier for his searing portrait of an alcoholic in Billy Wilder's 'The Lost Weekend,' and he treats this far different role with equal seriousness. As an upstanding citizen turned renegade badass, he's always believable and interacts well with Hagen and Avalon, both of whom file solid portrayals. A decade earlier, Hagen played her most memorable part, the ditzy, squeaky-voiced Hollywood diva who struggles to make the transition from silent to talking pictures in 'Singin' in the Rain,' but this no-glamor role is the polar opposite of Lina Lamont, and her sincerity and restraint help us stay invested in the story, despite some wild plot developments. Avalon, a year before his first 'Beach Party' movie, also asserts himself well, effectively combining boyish innocence with a teen idol swagger to paint a fine portrait of a typical adolescent prematurely thrust into manhood.

'Panic in Year Zero!' looks a bit dated, but its core element - one family's desperate struggle for survival during a global crisis - remains timeless. Though nuclear threats have somewhat abated over the years, radical enemies still conspire to rock the world's foundations, and this film brings the fallout from a cataclysmic attack down to an intimate level, and its hopeful message tempers the disturbing reality we all face. The world is a crazy place, and this somewhat crazy movie tells us someday we all might need to become a little crazy if the world falls off its axis and leaves us hanging in limbo. 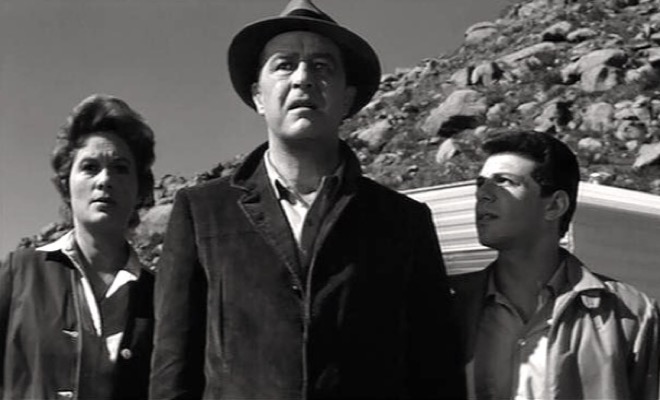 'Panic in Year Zero!' arrives on Blu-ray packaged in a standard case. Video codec is 1080p/AVC MPEG-4 and audio is DTS-HD Master Audio 2.0 mono. Once the disc is inserted into the player, the static menu with music immediately pops up; no previews or promos precede it.

Kino Lorber hits a homerun with this 1080p/AVC MPEG-4 transfer, which was struck from a newly restored 4k master. From the moment the first image hits the screen, the wow factor is stunningly apparent, and despite a few errant nicks, specks, and marks, the print looks crisp and vibrant from beginning to end. Grain has been almost eliminated, though some fluctuations in texture do exist, and perfectly pitched contrast and superior gray scale variance lend the picture a palpable sense of depth. In fact, detail levels are so enhanced, the sporadic rear projection work is all too obvious, making some scenes feel a bit cheesy. Exteriors look natural and polished, patterns are rock solid and resist shimmering, close-ups are razor sharp, and nocturnal sequences benefit from rich, deep blacks. No noise, crush, or other visual imperfections intrude, and any digital doctoring escapes notice. Though 'Panic in Year Zero!' is a low-budget film, this transfer gets the red carpet treatment, and fans will be thrilled with the results.

I tend to like loud tracks, but the DTS-HD Master Audio 2.0 mono track was too bombastic even for my ears. Out-of-whack levels often favor music and effects over dialogue, creating an unbalanced mix that calls too much attention to itself. Excellent fidelity, however, allows Les Barker's score - which director Joe Dante calls "discordant when it's good and just inappropriate when it's bad" - to fill the room with ease, and a wide dynamic scale amazingly keeps distortion at bay. Rumbling car engines, gunfire, fisticuffs, screeching tires, and other sonic accents are well rendered, and most of the conversations come through clearly. Best of all, no age-related hiss, pops, or crackles intrude. Though the audio remains clear and clean throughout, too many balance issues keep it from achieving the marks it deserves.

Kino Lorber includes a couple of decent supplements that honor and enhance our appreciation of 'Panic in Year Zero!'.

'Panic in Year Zero!' doesn't just tap into our paranoia about a nuclear apocalypse, it makes us wonder how we'd react in the face of a terrorist attack or natural disaster that upsets the world order and turns civilized society into bedlam. Like many early 1960s films specializing in shock and schlock, it's low-budget, frenzied, and a bit cheesy, but Ray Milland, who does double duty as director and star, rarely takes his foot off the gas while making sure the sporadic moments of substance resonate. Kino Lorber's Blu-ray presentation features a stunningly restored video transfer, bombastic audio, and a couple of interesting supplements, all of which breathe new life into a neglected relic that remains surprisingly relevant in this uncertain age. 'Panic in Year Zero!' may tell a far-fetched story, but the human element keeps it real and makes this tale of disaster and survival worth a look.

Sale Price 17.25
List Price 29.95
Buy Now
3rd Party 17.23
In Stock.
See what people are saying about this story or others
See Comments in Forum
Previous Next
Pre-Orders
Tomorrow's latest releases