In the ravaged near-future, a savage motorcycle gang rules the road. Terrorizing innocent civilians while tearing up the streets, the ruthless gang laughs in the face of a police force hell-bent on stopping them. But they underestimate one officer: Max (Gibson). And when the bikers brutalize Max's best friend and family, they send him into a mad frenzy that leaves him with only one thing left in the world to live for – revenge! Also starring Joanne Samuel, Hugh Keays-Byrne (Mad Max: Fury Road) and Steve Bisley (The Great Gatsby, Red Hill), this rugged racecar of a film runs on "comic book volatility… exhilarating rowdiness and visual intensity" (The New York Times)!

To borrow from one of the movie's villains, 'Mad Max' is a fuel-injected suicide machine, rocking and rolling out of control down the highways of a dystopian Australian landscape. It's a bleak, nihilistic future where law and order are quickly deteriorating while the world continues to survive on the fumes of the planet's virtually-depleted fossil fuels. Ironically, those still desperately clinging to some semblance of civil society have taken to a near masochistic obsession with high-performance, gas-guzzling automobiles, like the Holden Monaro driven by the aforementioned villain calling himself the "Nightrider" during his escape in the opening act. Along with the thrilling action and awesome stunts, part of the film's greatness is in these very subtle touches of subtext and underlying themes.

In that same opening, we are also introduced to our would-be hero, Max Rockatansky (Mel Gibson in the title role that essentially launched his career), top pursuit driver for a federal police force named the Main Force Patrol (MFP). The suggestive fetishism with roaring muscle cars is made all the more implicit as we watch the cop almost methodically dress into his black leather uniform and easily dispatch the criminal while in a rather colorful pursuit vehicle. Later, a motorcycle gang with a bizarre hatred for anything on four wheels and led by Toecutter (Hugh Keays-Byrne looking like a scruffy, hairier version of Simon Le Bon) seek retribution for their fallen comrade. But when the gang comes after Max's wife (Joanne Samuel) and son, he takes his car fetish to the next level with a souped-up black Ford Falcon XB GT and does away with the whole lot of them. 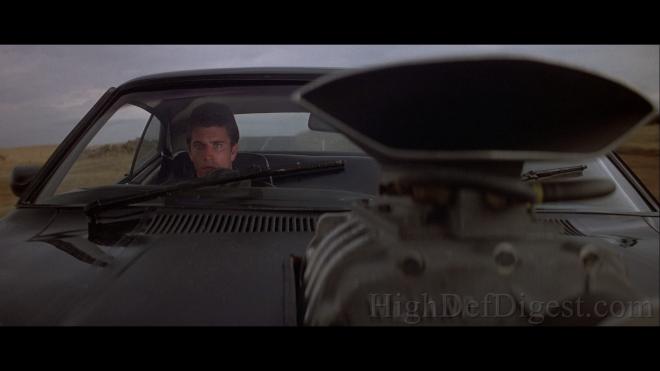 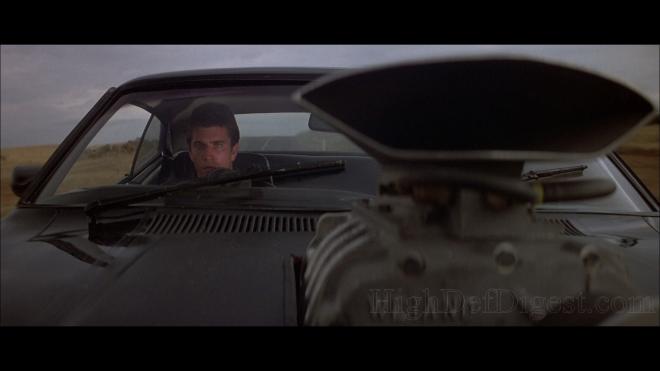 On the surface of it, Max's sudden rage into vengeance is justified in standard revenge-vigilante formula, driven by a deranged, gonzo pursuit for justice outside of the system he was already in doubts of and feeling disillusioned by — thus, the film's title. And this, right at the cusp of modern civilization's collapse. Making the film all the more ruthlessly awesome is immersing this frankly conventional plot in an easily-identified western environment. This is most apparent when Toecutter's gang, the interestingly named "The Acolytes," first arrives and terrorizes a sleepy town like a barbarous, lawless posse of vulgar desperadoes. But even further is a storyline that loosely resembles Fred Zinnemann's 'High Noon' with our hero forced to confront those rogue hooligans on his own.

To some, 'Mad Max' can be dismissed as another car-obsessed action flick in the vein of similarly-minded American features like 'Bullitt,' 'Vanishing Point,' 'Death Race 2000,' the original 'Gone In 60 Seconds' and 'Dirty Mary, Crazy Larry' — only revving with a bit more violence. Still, the film from George Miller, making his directorial debut, is a super-charged, high-octane actioner with a genuine soft-spot about family and an uncertainty about the future of the social order. Brilliantly fusing current environmental concerns and a standard revenge/vigilante plot, the story is at its core a western theme set in a dystopian future where humanity seems to be slowly devolving into anarchy and the degradation of civil values, a harsh and unpleasant world where barbarity and savage brutality lies in wait, soon to become the norm.

Shout! Factory beckons 'Mad Max' to Blu-ray as a Collector's Edition under the distributor's Scream Factory line. The Region A locked, BD50 disc is housed inside the normal blue case with brand new reversible cover art and a cardboard slipcover. At startup, the disc goes to a menu screen with full-motion clips while music plays in the background. 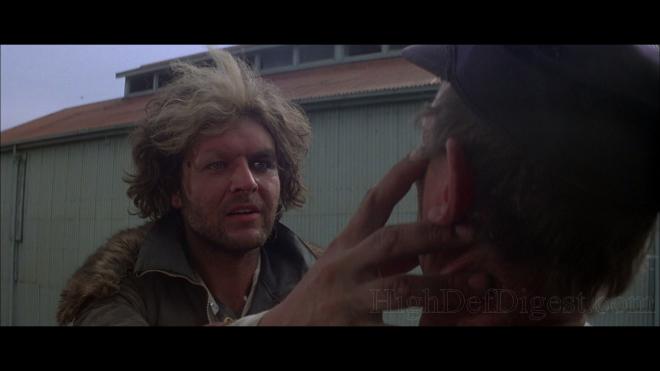 The future indeed does look dark and bleak when a cult classic like 'Mad Max' roars onto the screen with an AVC-encoded transfer that's worse than its predecessors.

For all intents and purposes, this new Blu-ray from Scream Factory appears identical to the two MGM releases: a 2010 standalone and a 2013 trilogy boxset. Some noticeable wear and tear is present, several soft spots in the photography creep up and minor discoloration in the source manifests throughout, but for the most part, the source is in rather excellent condition. Presented in a 2.40:1 aspect ratio, the video comes with a thin layer of grain while displaying comfortably bright contrast levels and clean, crisp whites. Blacks are true and accurate with strong shadow delineation. Colors seem deliberately limited, favoring secondary hues and earth tones, but the overall palette is fairly vivid with richly-saturated primaries throughout. The original, mostly soft-focus cinematography is apparent, but the image is appreciably sharp and detailed. Fine object and textural details are distinct with several exterior scenes looking remarkably well-defined.

Knocking this high-def presentation down a notch, however, are the many moments of noticeable compression artifacts, which are very disappointing. One such moment is the scene when a panic-stricken Jessie franticly searches for infant Sprog and encounters Toecutter's bike gang (1:09:50). Behind the concerned mother, a small silo is ruined with moiré patterns. Most egregious are the several instances of aliasing on the edge of buildings and railings. This is at its worst around the 15-minute mark when Jessie tells Max she's crazy for him and later, when Toecutter and Bubba ride in pursuit (1:17:55) just before the rest of the gang assembles outside a white building (1:20:40).

If not for these moments, the presentation would be a fine watch. 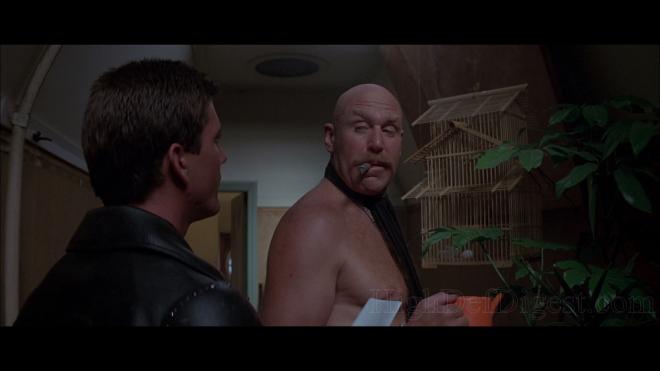 Max rumbles and revs his engine with a trio of generally pleasing if only slightly troubled DTS-HD MA soundtracks. The third option is the American dubbed version which isn't all that bad, save for the rather average ADR work, but it honestly is not the best way to watch the movie.

The first track appears to be the same from previous releases while the second comes in two-channel stereo. Of the two, to my amazement, I favored the 5.1 upmix, as the music of Brian May and the roar of the vehicles screeching in all directions fills the room and creates an amusing environment. The other track interestingly feels like a squeezed down remix of the former, exhibiting better directionality and a well-balanced mid-range. Bass is also palpable where appropriate, but explosions and crashes feel a tad wimpy. The one minor and unfortunate issue evident on both tracks is the dialogue being often overwhelmed by the surrounds and discrete effects. While it's not a huge problem to gripe over, it is an issue nonetheless that only makes hardened fans wish for a lossless option of the original mono design. 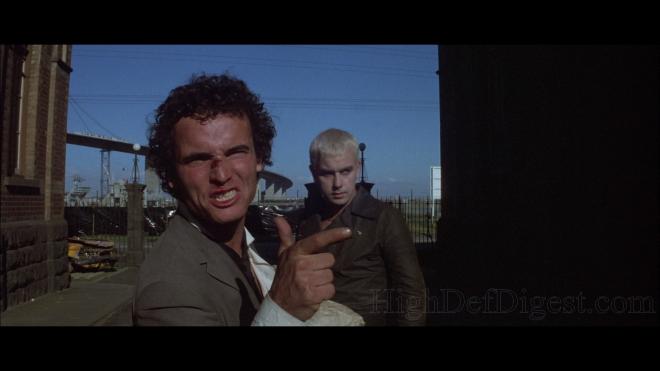 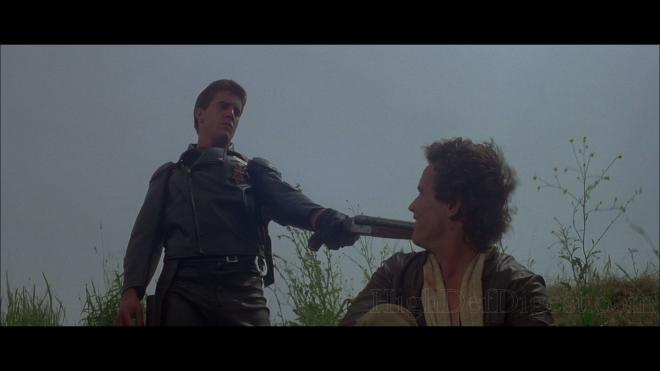 Mad Max roared into theaters like a fuel-injected suicide machine, splattering the silver screen with bloody vengeance, modified-car mayhem, and a bleak vision of a post-apocalyptic future. George Miller directs the lone adventures of the road warrior super-charged and revving with wild stunt spectaculars that satisfy audiences' lust for wild action. The Blu-ray from Scream Factory unfortunately crashes and burns with a rather disappointing picture quality, though the lossless audio remains in good form. With a couple new supplements sweeting the deal, hardened piston-head fans will be quite tempted, but the overall package is really small cosmetic work concealing some troubling issues in the engine.

Sale Price 11.18
List Price 16.99
Buy Now
3rd Party 2.92
In Stock.
See what people are saying about this story or others
See Comments in Forum
Previous Next
Pre-Orders
Tomorrow's latest releases