In Alfred Hitchcock’s I Confess, Father Michael Logan (Montgomery Clift), apparently a model of clerical piety, hears a killer’s confession. Eyewitnesses point to a priest as the murderer, and the sacrament of penance forbids Logan to speak out – even in his own defense – when circumstantial evidence targets Logan as the prime suspect! Academy Award winners* Anne Baxter and Karl Malden costar as a former f lame and a police inspector whose attempts to clear Logan only entrap him further. Filmed in Quebec on locations highlighting that city’s Old World traditions, I Confess races toward a climax that’s unforgettable. And in true Hitchcock fashion, you’ll confess to being hooked all the way.

Alfred Hitchcock never made a film noir per se, but with 'I Confess' he came close. Within the framework of his traditional "wrong man" scenario, Hitchcock employs many core noir elements — deep shadows, stark photography, gritty location shooting, and a brooding sense of fatalism. Strangely lacking, however, is the director's trademark tension and suspense. Somber, serious, and painfully slow-moving, 'I Confess' lacks the energy and intensity of most Hitchcock films, despite a fine cast and fascinating premise.

Montgomery Clift portrays Father Michael Logan, a young Catholic priest in Quebec City, who late one evening encounters caretaker and German refugee Otto Keller (O.E. Hasse) in the pews of his church. Father Logan at once notices Keller's severely troubled state and tries to counsel him. Keller initially resists, but soon begs to bare his soul, and within the private confines of the confessional admits to killing a man during a failed robbery attempt. Keller later unburdens himself to his repressed yet supportive wife (Dolly Haas), sharing his fears of impending capture, trial, and execution — until it dawns on him that Catholic law forbids Father Logan from betraying his confidence. Knowing the priest must respect the sanctity of confession allows Keller to brazenly continue leading a normal, guiltless life, as long as he believes Father Logan will adhere to his vows.

Complications arise when Inspector Larrue (Karl Malden) interviews witnesses who recall seeing a man in a priest's robe leaving the scene of the crime. Larrue questions Father Logan, who, for personal reasons, refuses to account for his whereabouts around the time of the murder. Now targeted as the chief suspect, Logan faces an impossible dilemma: Either he rejects religious law and exposes Keller or risks conviction for a crime he did not commit. Logan never wavers, bravely resisting the temptation to save himself, but as Larrue tightens the noose, the film poses a potent question: Which laws deserve more respect — those made by man or by God?

'I Confess' plays more like a straight drama than most Hitchcock films. The director consciously strives for depth and introspection, and seems to relish exploring the movie's central moral conflict. Worried we might miss the point, Hitchcock lends his picture an almost threadbare, less-is-more feel, forcing us to focus on ideas instead of technique. He often employs an off-kilter camera to emphasize the skewed morality Father Logan must follow, but generally stays out of the story's way. An undercurrent of tension simmers throughout, but the lethargic pacing prevents it from reaching the full boil we expect and desire. Aside from a climactic chase, the film is strangely inert. Terse conversations predominate, many of which are enhanced by a plethora of close-ups showing characters wrestling with their tortured psyches.

Of course, no actor depicts inner turmoil better than Clift, who, along with contemporaries Marlon Brando and James Dean, beautifully balances gut-twisting angst with an almost child-like sensitivity. A most unlikely Hitchcock hero, Clift lacks Cary Grant's polish and James Stewart's regular guy demeanor, but brings to 'I Confess' the quiet intensity required to make the story believable and the priest's moral quagmire wrenching. (Hitchcock reportedly had little patience with Clift's reliance on method acting technique, and as a result, the two did not get along particularly well during shooting.) The role's constraints keep Clift from scaling the heights he achieves in 'A Place in the Sun' and 'From Here to Eternity,' but he's a mesmerizing presence nonetheless.

Anne Baxter portrays Father Logan's old flame, Ruth Grandfort, whom he courted before becoming a man of the cloth and who still carries a torch for the priest. Ruth also holds his alibi, but revealing it to police would compromise her marriage to a local politician and further sully Logan's tarnished reputation. The bleached blonde Baxter gives a sympathetic performance, but her breathy line deliveries often recall her portrayal of Eve Harrington in 'All About Eve,' especially during an extended flashback in which she recounts her affair with Logan. The film's best work, however, comes from Hasse, who masterfully depicts Keller's evolution from a frightened, repentant killer to an ice-cold manipulator willing to do whatever it takes to protect his freedom.

Despite flashes of brilliance, 'I Confess' never bowls us over like we hope it will. Plot contrivances rescue the characters and allow justice to prevail, but by abandoning the play's original downbeat and far more impactful ending, Hitchcock robs his film of power and resonance. Stylistically, Hitch rarely drops the ball, but frequent fumbling prevents 'I Confess' from maximizing its potential. Although we root for its success throughout, this most intriguing Hitchcock film leaves our prayers unanswered. 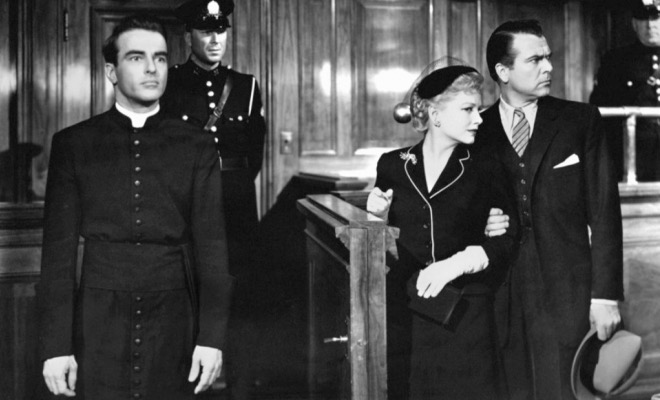 'I Confess' arrives on Blu-ray packaged in a standard case. Video codec is 1080p/AVC MPEG-4 and default audio is DTS-HD Master Audio 2.0 mono. Once the disc is inserted into the player, the static menu with music immediately pops up; no previews or promos precede it.

Another winner from Warner Archive, this excellent 1080p/AVC MPEG-4 transfer is a big step up from the previous DVD. Vibrant contrast and enhanced clarity bring out the best in Robert Burks' stark, shadowy cinematography that often adopts a semi-documentary feel. Grain is still evident, but appears less pronounced, lending the image a lushness and balance it previously lacked. Gone are the harsh glares that obscured details on the DVD, as well as the nicks and scratches that occasionally dotted the print. Black levels remain rich and inky, and lots of gray level variance adds texture and depth to the Quebec streets and ornate interior of the church. Close-ups show off facial features well, especially highlighting Clift’s classic good looks, and many fine details, such as the weave of Malden’s suit and the floral upholstery on Baxter's sofa, are startlingly vivid. A few scenes exhibit a bit of softness, but some of it - most notably during the lengthy flashback sequence - is intentional. For such a murky film, shadow delineation is quite good, and only minimal instances of crush occur. Hitchcock fans will be delighted with this top-notch effort, which definitely merits an upgrade.

A lossless DTS-HD Master Audio 2.0 track replaces the DVD’s lossy Dolby Digital 1.0 track, but the sound is still monaural and, aside from a slight uptick in detail level, doesn’t exhibit any marked differences. The smooth, bright, balanced audio with no age-related defects or distortion is enhanced by a wide dynamic scale that effortlessly handles all the bombast of Dimitri Tiomkin’s jarringly melodramatic score. Though some of the thick accents can be difficult to understand, most of the dialogue, including Clift's mumbling and Baxter's whispers, comes through clearly. Sonic nuances don’t play a huge part in ‘I Confess,’ but this high-quality track nicely handles the chores required of it.

All the extras from the 2004 DVD have been ported over to this Blu-ray release.

Despite my long-standing and passionate admiration for both Hitchcock and Clift, I must confess ‘I Confess’ doesn’t rank among my favorite films of either artist, yet somehow it draws me in every time I see it. This absorbing but sterile study of a young priest whose dutiful belief in the sanctity of confession prevents him from revealing a murderer’s identity may inspire spirited debate, however its slow pace, lack of fireworks, and cop-out ending soften its impact. Still, Hitchcock’s trademark touches and Clift’s magnetic presence elevate this interesting morality tale and make it worth watching. Warner Archive’s Blu-ray presentation improves upon the previous DVD with excellent video and audio transfers and limited yet substantive supplements, all of which should seal the upgrade deal for fans. ‘I Confess’ is a definite departure for Hitchcock, but despite its faults, it merits both rediscovery and a recommendation.

Sale Price 17.99
Buy Now
3rd Party 11.95
In Stock.
See what people are saying about this story or others
See Comments in Forum
Previous Next
Pre-Orders
Tomorrow's latest releases