The Wrong Man is like and unlike any other Alfred Hitchcock movie. The story packs tension, the images are spellbinding and the dilemma genuinely frightening. But this time the master of suspense dramatizes the harrowing true experiences of a man tried for crimes committed by a lookalike robber.

Henry Fonda plays musician Manny Balestrero, a man full of visible but unspoken rage at his wrongful arrest. Vera Miles is his distraught wife Rose, driven to madness by the ordeal. And the right man to bring the unsettling facts of the case to vivid screen life with documentary precision is Hitchcock. He made New York City a star of the film and cast real-life Balestrero case witnesses in small roles. He shot in many actual locations, among them the Stork Club, Manny's jail cell and Rose's sanitarium.

"Don't you see, I'm just trying to tell you the truth."

Mistaken identity laced with mounting paranoia is one of Alfred Hitchcock's favorite and most pervasive themes, deliciously fueling such high-octane classics as 'Foreign Correspondent,' 'Saboteur,' and 'North by Northwest.' Those thrillers chronicle an everyman's reluctant entanglement in a complex web of deceit and treachery on a fantastic scale, but one of the director's lesser-known films brings such an unsettling scenario down to an all-too-relatable level. Simply titled 'The Wrong Man,' this methodical and realistic portrait of a mild-mannered musician who's arrested for a series of robberies he did not commit zeroes in on the heavy emotional toll such a harrowing experience exacts on its innocent victims, and it stands as one of Hitchcock's most personal and intimate works.

You may not be familiar with 'The Wrong Man' because it lacks the flash and bravado of Hitch's more famous exercises in suspense. Its low-key approach, understated portrayals, and almost documentary-like presentation make the film a definite departure for Hitchcock, despite a few trademark bits of innovative technique. It's also based on a true story - another rarity for Hitchcock - and faithfully follows its real-life trajectory to its ultimate detriment. But a few missteps notwithstanding, 'The Wrong Man' artfully and absorbingly depicts a nightmare all of us fear, and though times and attitudes have changed over the years, the basic premise remains disturbing, and provokes a queasy sense of unease that lingers long after the film ends.

Manny Balestrero (Henry Fonda) lives an ordered and honest life. A responsible and loving husband to Rose (Vera Miles) and father to two young sons, he owns a modest home in Queens and works at New York City's ritzy Stork Club as the orchestra's bass player. His modest salary just barely covers his family's expenses, so when Rose requires dental surgery, Manny hopes to cover the cost by borrowing against her life insurance policy. But when he approaches the window to take out the loan, the teller recognizes him as the man who robbed their office a few months before. That identification sets in motion an investigation targeting Manny not only for that crime, but also other hold-ups, none of which he committed.

The police, however, and other victims are certain he's the culprit, especially after an anomaly in a handwriting sample seems to be damning evidence of his guilt. Manny is arrested and incarcerated, then released on bail, and with the deck stacked against him and no funds to hire a hotshot lawyer, he enlists novice trial attorney Frank O'Connor (Anthony Quayle) to handle his case. Frank suggests Manny and Rose set out to find witnesses who will corroborate his alibi, but the search and its setbacks debilitate Rose, who buckles under the strain and begins to exhibit symptoms of severe depression.

The scary thing about 'The Wrong Man' - aside from the fact that it's true - is how quickly Manny loses control of his life and how he's powerless to fight the erroneous accusations that dog him. Scarier still, Hitchcock doesn't paint the police investigation as an ignorant rush to judgment driven by prejudice or preconceived notions. On the contrary, it's a methodical, even-handed probe. That's what causes our collective stomachs to knot up and makes us believe what happened to Manny could easily happen to us if we're at the wrong place at the wrong time on the wrong day.

Hitchcock treats this true story with reverence, respecting the personalities involved and adopting a more realistic and subdued cinematic style to heighten its impact. His artistry is still on display, but only once - using a rotating camera - does he call attention to it. Location shooting enhances the mood and the measured pacing occasionally feels a bit labored, but the literate script by esteemed playwright Maxwell Anderson stays faithful to both the characters and the facts. As a result, the movie shifts its focus to Rose toward the end, which disrupts its delicate balance, but the strong performances keep us involved.

Fonda was 51 at the time of shooting and he looks it, which makes it difficult to accept him as a 38-year-old. But aside from that trivial incongruity, there are no sour notes in his portrayal. As always, Fonda slips comfortably into his role and projects an easygoing naturalness and heartfelt sincerity that strike an emotional chord with viewers. Though he and Miles don't particularly project an Italian heritage, their tender intimacy makes their relationship credible. Miles would make a greater impression in Hitchcock's 'Psycho' four years later (and was slated to play the female lead in 'Vertigo' before pregnancy forced her to withdraw, much to Hitch's everlasting regret), but her thoughtful work in 'The Wrong Man' - her first major film - is quite engaging.

TV fans will recognize Werner Klemperer of 'Hogan's Heroes' fame in a small role as Rose's psychiatrist, and both Bonnie Franklin and Tuesday Weld, as a couple of giggly preteen girls, as well as Harry Dean Stanton as a prison employee, make their film debuts in bit parts. In addition, such Hitchcock regulars as cinematographer Robert Burks and composer Bernard Herrmann lend a combination of elegance and grit to this simple and affecting tale. Interestingly, Hitchcock so respected the story's integrity he decided to forego his usual whimsical cameo in favor of a straightforward on-camera introduction that emphasizes the movie's social importance and basis in reality.

Though it flaunts a few familiar Hitchcock touches, 'The Wrong Man' is not a typical Hitchcock film. It's not perfect, but it shows the director's versatility and willingness to both think outside the box and examine important themes in the manner that best suits them. Sometimes it's the offbeat movies in a director's canon that cement their reputation as an artist, and 'The Wrong Man' helps us see an iconic filmmaker in a new and more illuminating light. 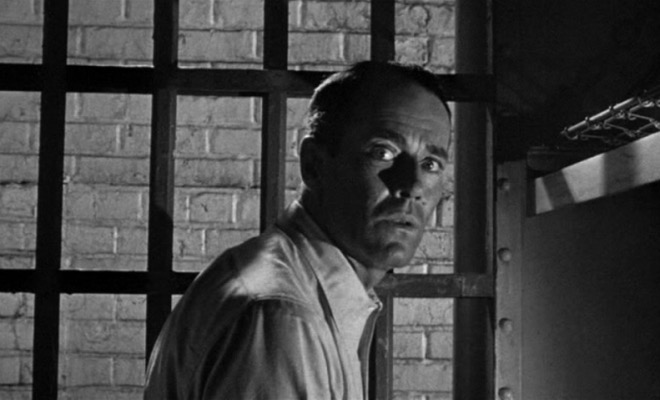 'The Wrong Man' arrives on Blu-ray packaged in a standard case. Video codec is 1080p/AVC MPEG-4 and default audio is DTS-HD Master Audio 2.0. Once the disc is inserted into the player, the static menu without music immediately pops up; no previews or promos precede it.

Warner Archive has been releasing a series of stunningly remastered films on Blu-ray, and 'The Wrong Man' is another stellar addition to the company's growing collection of catalogue classics. The 1080p/AVC MPEG-4 transfer is a definite step up from the previous DVD, with increased clarity and better contrast combining to create a smoother, more immersive presentation. Grain is an essential aspect of the movie's look, supplying essential texture, but it's well integrated, consistent, and never intrusive. The result is a strikingly organic, film-like appearance that heightens the intimacy of this true-life tale. In addition, excellent gray scale variance pumps up detail levels and superior shadow delineation allows us to absorb all the subtleties of Robert Burks' stark and brooding cinematography. Nary a nick or scratch dots the pristine print, and no noise or crush creeps into the picture. Hitchcock aficionados will surely cheer this terrific transfer that perfectly represents the director's intentions.

The DTS-HD Master Audio 2.0 track nicely renders all of the film's sonic nuances with ease. Shoe soles crunching against concrete, the rumble of subway trains in the tunnel, and the clicking of adding machines in the insurance office add vital atmosphere to the narrative while heightening aural interest. Excellent fidelity and a rich depth of tone boost the impact of Bernard Herrmann's sharp, dramatic music score, while all the soft-spoken dialogue is well prioritized and easy to comprehend. Any age-related defects, such as hiss, pops, or crackles, have been meticulously erased, and an expansive dynamic scale keeps distortion at bay. Sound always plays an important role in Hitchcock films, and this superior track properly showcases all the carefully integrated audio touches.

The same supplements from the 2004 DVD have been ported over to this Blu-ray release.

'The Wrong Man' may not be one of Alfred Hitchcock's signature films, but this simple, meticulous examination of the devastating impact of mistaken identity on a typical middle class family is a fascinating change of pace for the Master of Suspense. Quiet, understated, but bursting with honest emotion and a gritty realism not usually associated with the director, the movie explores relatable themes and taps into universal fears about the police and an imperfect justice system that often fails its citizens and destroys innocent lives. Warner Archive's Blu-ray presentation features top-notch video and audio transfers and an absorbing featurette, all of which enhance the impact of this well-acted, underrated personal drama. Highly recommended.

Sale Price 17.99
Buy Now
3rd Party 17.79
In Stock.
See what people are saying about this story or others
See Comments in Forum
Previous Next
Pre-Orders
Tomorrow's latest releases