How I Won the War

Rock legend John Lennon (A Hard Day s Night) stars in his first film performance in this hilariously surreal collage of battle footage and one-liners lampooning the absurdity of the war. Michael Crawford (A Funny Things Happened on the Way to the Forum) co-stars as an inept WWII commander leading his troops to series of zany misadventures in the satirical war classic directed by the great Richard Lester (The Knack... and How to Get It), featuring beautiful cinematography by David Watkin (Chariots of Fire, Out of Africa) and a stellar supporting cast that includes Roy Kinnear (The Hill), Lee Montague (Mahler), Jack MacGowran (The Fearless Vampire Killers), Michael Hordern (Where Eagles Dare) and Alexander Knox (The Vikings).Special Features: The Bed Sitting Room "Trailers From Hell" with John Landis | The Knack "Trailer From Hell" with Allan Arkush | Trailer Gallery

"War is no doubt, the noblest of games."

As someone who is a connoisseur of absurdist comedy, even I have my limits when a work can become just too ridiculous. While I appreciate that a film that is not at all meant to be taken seriously and therefore, can be free of any sort of plot or traditional structure, the film still needs some meat on its bones for the audience to sink its teeth into. War comedies are a particularly tough genre to make fully absurdist considering the violent nature of war and the death and destruction that it can bring. That said, films like 'What Did You Do During The War Daddy?' have shown that there is room to be hilarious. Richard Lester's 'How I Won the War' takes absurdity to a realm borderline tiresome as there seems to be no method to the madness and risks losing an audience's attention while also testing their patience.

In the world of the blind, the man with one eye is king. If no man has an eye, then it's just as well that the blind lead the blind - even into battle! Lt. Goodbody (Michael Crawford) has been given his very own command in North Africa during WWII - even though he doesn't seem to have the first idea what to do with it! Under his command are the random ragtag makings of a fighting company with the blundering Clapper (Roy Kinnear), the squeaky clean Gripweed (John Lennon), the clownishly hilarious Juniper (Jack MacGowran) and the depressing Melancholy (Jack Hedley). While completely unfit to lead a group of school children to their classes, Lt. Goodbody is going to make the best of it when attempting to lead his men into battle, that is of course if they can find one as they traipse about all over North Africa and Europe.

As I've gotten to know Richard Lester a bit better as a filmmaker after viewing movies like 'The Knack and how to Get It,' 'The Bed Sitting Room,' and now 'How I Won the War,' it amazes me that the man was ever handed the keys to the 'Superman' franchise at all. He's just not a good fit for that sort of storytelling. On the other hand, he is an amazing fit for absurdist humor and probably should have focused his attentions towards working with comedy troops like Monty Python. His styling and pacing would have fit well with those guys and their sense of humor. That said, just because he's an absurdist, doesn't make everything he creates a winning piece of humor filled with laughter. 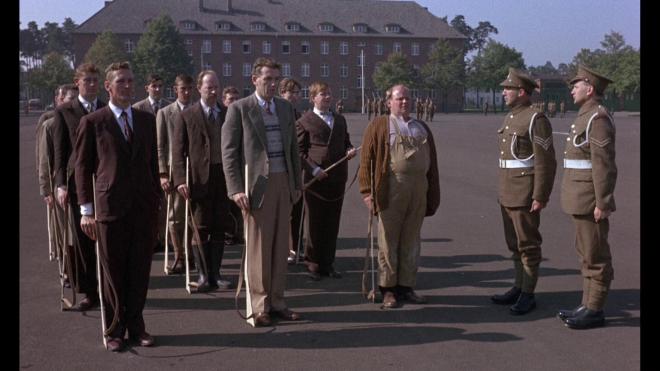 'After movies like 'A Hard Day's Night,' it's easy to see where Lester was going with 'How I Won the War,' but how he gets there doesn't seem to have been clear. Based on the novel by Patrick Ryan, Lester and his screenwriter Charles Wood understandably had an uphill battle in order to adapt what was considered to be a wild and bizarre book about military leadership into something of which an understandable film could be made. Somewhere along the way Lester and Wood missed the mark. 'How I Won the War' starts out strong enough with a hilarious introduction to Michael Crawford's Lt. Goodbody and the rest of his command but as the film drags on from there, the flourishes of humor become harder and harder to appreciate.

That isn't to say that this film is terrible or without any value. 'How I Won the War' offers up some great comedic moments, but it still managed to test my patience in ways I wasn't expecting. So much of this film plays like a really long setup to a joke that when the punchline finally comes you feel like you missed it or just didn't get it. It's a lot like listening to that guy at a party who just doesn't know how to tell jokes so you give him a mercy chuckle so he doesn't feel bad. I did that a lot watching 'How I Won The War.' When you have talents like Michael Crawford and John Lennon in a film together, you expect some sort of spark or something to happen, but nothing much does. Crawford does a great job and can handle the material well, but he has no one to play off of so much of his laughs come from his narration or anytime he breaks the fourth wall. If you've never seen 'How I Won the War' but are at least curious, I will say there is some fun to be had with it, but I think the right mood and a lot of patience are required if you're going to make it all the way through to the end.

'How I Won the War' arrives on Blu-ray thanks to Kino Lorber and their Studio Classics line. Pressed onto a Region A Locked BD25 disc and housed in a standard Blu-ray case, the disc opens directly to a static image main menu with traditional navigation options.

With a 1.67:1 1080p transfer, 'How I Won the War' makes for a slightly above average leap to Blu-ray. While close-ups and middle shots have a tendency to show amazing clarity, distance and wide shots tend to lose a lot of focus and detail and can end up looking a bit soupy. Film grain has been retained allowing for a nice amount of detail where it counts most, but at times, the grain field can appear a tad noisy. Colors are muted to replicate that all too familiar WWII look but don't impact primaries too heavily. That said, most of the image is pretty drab looking so colors aren't exactly a big selling point. Black levels are pretty good offering a nice sense of depth to the image. The only visible damage to the print appears to be some small scratches and speckling. All in all not the worst transfer out there for a deep catalogue title, but it's not the most remarkable either.

'How I Won the War' is given a very shrill and aggressive DTS-HD MA 2.0 audio mix. Part of the problem for this mix is the frequent cutting within conversations where a character may be speaking in a normal tone and volume to be interrupted by someone shouting or a screeching sound or some sound effect to make the scene funny and then back to the first person. It's a bit of a tonal roller coaster ride and while you may not need to adjust your levels, the tonal shifts can be a lot to handle. The film's score and previously mentioned sound effects are also kicked up a few extra notches at times. This is largely for comedic effect to keep the kinetic energy going but again, it can be a bit jarring. It's hard to grade this mix because so many of these effects and anomalies aren't a transfer error anything of that sort and are instead presented as intended - which can be a bit obnoxious.

Trailers from Hell: 'The Knack and how to Get It': (HD 3:00) With Director Allan Arkush.

Even an absurdist comedy can be a bit too absurd. 'How I Won the War' is a movie that tries to enter the fray of war comedies but doesn't really bring much with it other than an under-utilized cast. Kino Lorber has brought the film to Blu-ray with a strong image transfer, but the audio mix can be a bit jarring to some as the film tries to mine laughter from numerous audio gags. Extras are a collection of trailers and 'Trailers from Hell' segments for other Richard Lester releases. All in all, 'How I Won the War' is a rent first see if you like it sort of comedy.

Sale Price 22.99
List Price 29.95
Buy Now
3rd Party 18.04
In Stock.
See what people are saying about this story or others
See Comments in Forum
Previous Next
Pre-Orders
Tomorrow's latest releases