The Knack, and How to Get It

You either do or you don't. The Knack, that is, of seduction! From Richard Lester, the director of the A Hard Day's Night and Juggernaut comes this inventive and hilarious romp through love and sex in 1960s London. Featuring a wildly frenetic filmmaking style - careening from slapstick to serious to avant-garde - this genuinely dazzling film is a mod masterpiece that won the prestigious Palm d Or (Best Film) at the 1965 Cannes Film Festival! Cool and sophisticate Tolen (Ray Brooks) has a monopoly on womanizing - with a long line of conquests to prove it - while the naive and awkward Colin (Michael Crawford, How I Won the War) desperately wants a piece of it. But when Colin falls for an innocent country girl (Rita Tushingham, The Bed Sitting Room), it's not long before the self assured Tolen moves in for the kill. Is all fair in love and war, or can Colin get The Knack and beat Tolen at his own game? Featuring un-credited appearances by future stars Jacqueline Bisset (The Deep), Jane Birkin (Blow-Up), Charlotte Rampling (The Night Porter) and a rousing score from legendary John Barry (Dr. No).Special Features: "Trailers From Hell" with Allan Arkush | The Bed Sitting Room "Trailers From Hell" with John Landis | Trailer Gallery

The romantic comedy is an age-old genre, one that adheres to specific tropes and conventions that rarely offer up any surprises. Even by the time Richard Lester's 1965 film 'The Knack… and How to Get It' was released, the genre had covered so much territory that the only place left to go was to try and cash in on the 60s mod free love stylings. While the film maintains a kinetic energy and the film's star Michael Crawford is certainly a strong comedic talent, it forgets to give the characters and, therefore, the story any humanity or dimension.

Poor hapless lovelorn teacher Colin (Michael Crawford) just isn't a man of the ladies. That isn't to say that he doesn't have lusts and urges towards the opposite sex, lord knows he does, he just doesn't have the knack with the ladies that other men like his border Tolen (Ray Brooks) does. As Tolen brings a new gal home virtually every other night, Colin is faced with a decision, either he's going to have to evict Tolen or pick the man's brain about how he can become more comfortable talking to women. Being a red-blooded male, Colin chooses the later option.

When the beautiful naïve Nancy (Rita Tushingham) shows up looking to rent a room from Colin, it's a good thing he's listening to Tolen's advice! Through a grueling series of training sessions designed to bolster his confidence, Tolen runs Colin through the ringer giving him all sorts of lurid pieces of advice while also forcing him into one awkward social situation after another. While Nancy is patiently sitting in the wings, Colin is trying to prove himself to her as a virile, strapping man's man and risks alienating himself from the young beauty simply because he's not being himself. 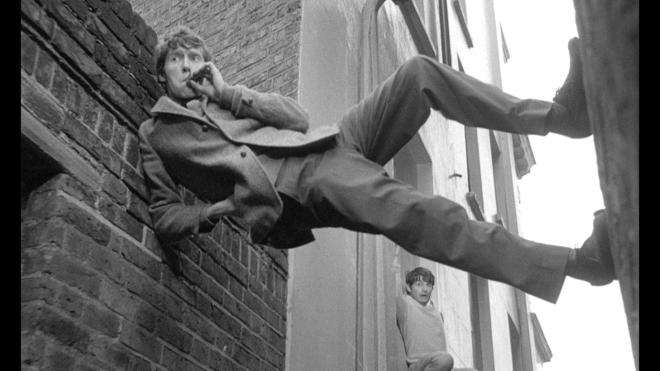 'The Knack… and How to Get It' is a rather strange film all around. So much of the film is told through monologues and visual montages, it at times almost feels like you're watching the product of an art project that was produced by Andy Warhol and The Factory. It's because of the film's visual flourishes that the characters never adequately shine through in a way that would make them appealing. Tolen is a misogynist without much of a redeeming quality since he feels that women are objects to be dominated and subjugated reducing Colin to a horny man-child looking to get laid while Nancy never quite becomes a real character unto herself.

This being my third Richard Lester film in as many months, I had grown accustomed to the man's stylings and penchant for madcap absurdity and was actually kind of taken aback that while this film is a bit on the absurd side, it actually had a coherent through-line of a story and didn't feel made up on the fly. That said, as much as there is a solid story here about an insecure man trying to figure out his place with a particular woman, the film doesn't take the time to give us a reason to care for Colin. We know he's a teacher and he owns his own home and rents rooms to people, that's about it. Why is Colin, whom by all accounts should be considered a successful person, so lousy with women? Was he scorned by loves past? Was he always the gawky guy who never knew what to say to a woman? It's a shame that this character never really comes to light as Michael Crawford is a lot of fun filling the character with a lot of the same energy that he would later bring to his take on Cornelius Hackl in 1969's 'Hello, Dolly!' All around 'The Knack… and How to Get It' is a perfectly fine film that offers up some halfway decent laughs, but those expecting something a bit more substantive may be left out in the cold.

'The Knack… and How to Get It' arrives on Blu-ray thanks to Kino Lorber and their Studio Classics line. Pressed onto a Region A locked BD25 disc and housed in a standard Blu-ray case, the disc opens directly to a static image main menu with traditional navigation options.

For as many strengths apparent in this 1.67:1 1080p presentation of 'The Knack… and How to Get It,' there are just as many weaknesses. Film grain has been nicely retained allowing for a pleasing amount of detail levels to show through without becoming noisy. Facial features, costumes, and the production design that went into creating Colin's home look fantastic. Black levels are, for the most part, very strong, but there are some instances of contrast blooming where whites look just too bright and effectively wash out and flatten the image. The image's grey scale is strong, but again, those contrast issues kick in from time to time and can really offset any positive marks. Thankfully the print sourced for this transfer is in relatively decent shape with only mild speckling and some very brief scratches being the visible sign of wear and tear.

The English DTS-HD 2.0 track provided for 'The Knack… and How to Get It' does the film a lot of justice. As mentioned previously a lot of the film drifts into monologues and narration rather than face to face conversation so it's good that dialogue is crystal clear and remains front and center. Sound effects are more in line with canned effects as they tend to have an unnatural tinny quality to them. The real stand out moments for the track are the few scenes that are relatively quiet and aren't stuffed with action or dialogue as the scene can actually feel spacious and allow for a sense of dimension to resonate. But again, Lester chooses to cut quickly so nothing stays in one place for very long. Aside from some slight hiss, this track is just fine and does the film justice.

'The Knack… and how to Get It' Trailers From Hell: (HD 3:00) Director Allan Arkush looks back at the film from Richard Lester, it's a fun but brief little remembrance piece.

'The Knack… and How to Get It' is one of those hit and miss movies. While a lot of the film works and proves to be a fine comedic showcase for Michael Crawford, there just isn't much to the film beyond being the superficial "guy can't get a woman' style romantic comedy. It's not a complete waste though as there are some genuinely good moments throughout. Kino Lorber has brought the film to Blu-ray featuring a decent A/V presentation and a smattering of brief extra features and trailers. 'The Knack… and How to Get It' is at the very least worth a look.

Sale Price 17.62
List Price 29.95
Buy Now
3rd Party 11.81
In Stock.
See what people are saying about this story or others
See Comments in Forum
Previous Next
Pre-Orders
Tomorrow's latest releases