Overview - The Egyptian Prince, Moses, learns of his true heritage as a Hebrew and his divine mission as the deliverer of his people.
OVERALL
Highly Recommended

'The Ten Commandments' is a classic piece of cinema. It's a movie that has stood the test of time, and has been passed down through the ages, gaining new fans every generation. Do I think it's a good film? Definitely, yes. Do I think it's one of the greatest ever? No, not really. Cecil B. DeMille's epic about Moses leading the Children of Israel out of Egypt is certainly a movie that sticks with you. It's a three and a half hour biopic about one of the Bible's greatest heroes and how he led his people out of bondage. It's undoubtedly a unique film-going experience.

Anyone who knows the story of Moses, knows how the movie is going to play out. For that matter, anyone thinking about purchasing this humongous collector's edition has likely watched the movie numerous times. There's no sense in describing the plot or how the story plays out. Instead let's talk about its intricacies. Why, on the one hand, I enjoy it, and why on the other hand, it begins to wear out its welcome.

'The Ten Commandments' moves along more like a stage play than a film. Complete with an overture and intermission. Maybe that's why I don't hold this movie in the highest of regards like so many others do. Staying true to its play-like atmosphere, much of the movie is dreadfully overacted, and some parts even descend into silly slapstick – like when Moses is found in the desert by the daughters in Sinai.

We're notified at the beginning that this story contains some of the parts of Moses' life that were left out of The Bible, most notably the interaction of Moses with his father the Pharaoh and his adopted brother Rameses. Charleston Heston as Moses and Yul Brynner as Ramses, form one of the most watchable struggles between two opposite forces that's ever been put on the big screen. Their scenes together are, by far, the best scenes of the movie.

What is most notable about 'The Ten Commandments' though, is its awe-inspiring scope. Made in 1956, this movie and its effects are simply astounding. There are scenes with literally thousands of extras. Nowadays filmmakers would more often than not digitally render huge crowds of people. Here they're all real, and it makes a huge difference. The wide shots of the Children of Israel leaving Egypt are simply awesome. I've become so accustomed to CG crowds and armies that seeing a group of people that large, assembled together for only a few shots blows me away. Seems like a pretty simple aspect of the movie to be astounded by, but every time I see it I feel the same way.

It's easy to see why this limited edition set was assembled for 'Ten Commandments' fans. It's massive, and full of some wonderful extras that we'll talk about later in the review. Seeing the movie reproduced on Blu-ray gives it a new life. It makes those large crowd scenes seem even more amazing.

I'm a casual 'Ten Commandments' fan. I can watch the movie about once a year and be just fine. I've never thought of it as one of the all-time greats, but as a memorable piece of cinema it's up there with the rest of them. It's a movie that can be enjoyed by religious and non-religious people alike, and nothing compares to some of Heston's one-liners.

Without a doubt, fans will be pleased with this massive limited collector's edition of the classic film.


This is an absolutely colossal set, packed to the brim with a whole bunch of extras. First off, as you can see by the picture, the movie comes packaged in a large rectangular box with a lenticular cover of a holographic Red Sea parting behind Moses. The slipcover is clear. In the bottom left corner of the slipcover you'll notice an individually numbered sticker that indicates which number set you have. As you can see by my sticker I was sent number 72,244 out of 100,000 copies.

Inside is a treasure trove of Egyptian wealth. It's hard to miss the clever packaging used to hold the discs. The stone tablets inside the package contain all six discs. They're held together by magnets around the edges. Inside the stone tablet holder you'll see the Blu-ray discs that are housed on the inside in their own disc hubs. Two 50GB Blu-ray Discs are used to house the three and a half hour feature-length film. On the other side of the stone tablet holder are two swinging arms that contain hubs for the DVDs of the 1956 feature. Behind those is one 50GB Blu-ray that contains the original 1923 feature along with the movie's special features. The last disc is a DVD that also contains special features. Six discs in all.

There's a book called "'The Ten Commandments': An Epic Journey" included. The book is 48 pages long. It contains numerous pictures from behind the scenes as DeMille and his team worked to recreate a realistic Egyptian world. The book contains pictures from the 1923 feature, along with storyboards for the Burning Bush and staff turning into a serpent effects.

There's another booklet included, which is 30 pages long. It's a paperback book that has hand drawn pictures of the story of Moses while the text below tells what is happening in the pictures.

There's an envelope included that simply says Costume Sketches on the front. Inside there are eight individual sketches of different characters like Moses, Rameses I, and Rameses.

Lastly, there's a clear envelop that contains a variety of different items. There's a copy of an audience test group message, a telegram to Cecil B. DeMille from Adolph Zukor, a handwritten letter from Heston to DeMille regarding a christening (it's hard to read), Heston's Egyptian schedule that looks truly brutal, and a Café Continental menu with a few rough sketches on the back of it of Egyptian headdresses.

If you're into movie trinket memorabilia then this is a set for you. There's a ton of stuff in here. 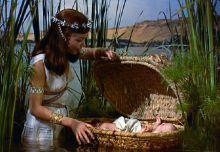 Paramount has simply done a marvelous job restoring this film for Blu-ray. This will be used as demo material for years to come, showing exactly what a Blu-ray presentation can do for an older film. Never has 'The Ten Commandments' been so defined, so clear, and so colorful. This a video presentation that left me gob-struck most of the time.

Fine detail is simply unbelievable. Textures are immaculate. You can see individual stitches in Moses' mother's Hebrew robe. You can see each one of the tiny golden squares that make up Pharaoh's elaborate chest pieces. At the beginning, when DeMille comes out and greets the audience, you can see the individual weaves of the tassels lining the bottom of the curtain behind him. The bumpy surface of the carved stones that make up Pharaoh's palace are incredibly defined. Everything from clothing, to the texture of the Hebrew's grizzled, sun-drenched faces is perfectly visible. Far and away, one of the most detailed catalogue presentations I've ever seen.

Colors are bright and bold. The ornate Egyptian costumes burst off the screen with rich gold, deep blue, and crimson red. Skin tones are always natural, and never take on any unnatural hues. The strong colorization is another aspect of this Blu-ray that took me by surprise. With a movie of this age you would have thought that the colors may have faded over time, but they are more vivid than they've ever been.

The picture is free of noise. Dare I say, I didn't notice one hint of a speck or hair popping up. This film has been meticulously restored, you can tell. Even though there's no errant noise to speak of, the movie still has a realistic DNR-free feel to it. An even grain texture lends a wonderful cinematic look to the movie.

The one and only nitpick with the presentation is something that simply couldn't be helped no matter how hard anyone tried to hide it. There are times that backdrops have been inserted, like when Moses is showing his father the royal city he's building for him. There is a clearly visible cutout line around the characters. With the 1080p resolution it's even easier to tell how hokey the effects look now. I hate to even bring it up, because there's nothing that could have been done about it. In all seriousness, the effects are amazing considering the time period of this movie, but still, under the scrutiny of HD, that darned cutout line may distract you from the overall beauty on a few occasions.

The audio doesn't quite reach the majesty of the video presentation, but Paramount's inclusion of a DTS-HD Master Audio 5.1 lossless surround track does come pretty close. From the opening overture of music, you can tell that that soundtrack is going to be loud and full of clearly reproduced brass instruments. Trumpets blare throughout the soundfield. Much of the soundtrack is centered in the front three channels, but the rear channels do enjoy a bit of ambiance. LFE is particularly, and surprisingly, strong in a few parts. When the slaves are pushing the massive stone into place while a woman is caught under it, the floor rumbles with low end support. Deep bass also accompanies the hoof beats of Pharaoh's army as they chase down the Children of Israel.

Dialogue is clearly presented through the front and center channels. There are quite a few times where Moses walks off screen talking. Directionality works well in these instances, placing his voice directly where you'd picture him being at that moment, relative to where the camera is pointing. The only dialogue that comes across far too soft,ironically, is the voice of God. Compared to the other voices on display here, God's voice seems far too reserved and is at times, like during the Burning Bush scene, is way too hard to hear. There are also a few times where shouts harbor the slightest bit of high end noise, like when Pharaoh shouts orders to his chariots as the move out. This audio presentation isn't as demo-worthy as the video presentation, but it gets most everything right and provides for an overall wonderful listening environment. 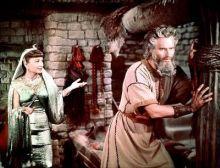 Is this set worth it? Well, with only 100,000 copies out there, it's sure to become a collector's item pretty quickly. Even though the packaging is bulky it does contain a wealth of wonders for any of the movie's die-hard fans. The video reproduction is simply astounding. The audio is well done and adds new life to the movie. The special features, along with all the extra perks contained in the package, are designed specifically for serious fans. Opening the package is, simply, a lot of fun. Searching through all the trinkets and booklets that are included is any fan's dream. I even like the creativity put into the stone tablets that serve as the disc housing. This is an all around great collector's set, and doesn't feel like a pure money grab. It's something that collectors will be able to cherish and show off with the rest of their collection. 'The Ten Commandments' on Blu-ray comes very highly recommended. The film is also available as a Two Disc Special Edition Blu-ray.

Sale Price 48.99
Buy Now
3rd Party 123.73
In Stock.
See what people are saying about this story or others
See Comments in Forum
Previous Next
Pre-Orders
Tomorrow's latest releases