The Gift asks the question, "Can you really go through life having never wronged anyone?" Simon (Jason Bateman) and Robyn (Rebecca Hall) are a young married couple whose life is going as planned until a chance run-in with Simon's high-school acquaintance sends their world into a narrowing tailspin. At first Simon doesn't recognize Gordo (Joel Edgerton), but after a series of uninvited encounters and mysterious gifts prove troubling, a horrifying secret from the past is uncovered after more than 20 years. As Robyn learns the unsettling truth about what happened between Simon and Gordo, she is forced to contemplate: how well do we really know those closest to us, and are bygones ever really bygones?

"Karma's a bitch" has been a popular, pervasive theme in motion pictures since the iron hand of censorship ruled supreme during Hollywood's Golden Age. Yet few films drive the point home better than 'The Gift,' which came out of left field last summer to become a surprise hit for actor Joel Edgerton, who wrote, directed, and stars in this unsettling thriller about the far-reaching consequences of mean-spirited behavior. While on the surface 'The Gift' resembles countless creepy stalker tales and adheres to a number of genre conventions, it often veers off the well-trod path of cinematic horror to examine the seeds of discord in human relationships and the enormous impact a rumor or innuendo can have on our lives, especially when we're young, impressionable, and vulnerable. It may not possess the scare quotient of other, more graphic exercises in suspense, but it has more meat on its bones and leaves us pondering ideas instead of tallying a body count.

On the surface, Simon (Jason Bateman) and Robyn (Rebecca Hall) seem like idyllic young marrieds. They've just relocated to L.A. from Chicago and purchased a modest home in the hills with floor-to-ceiling windows. Now we all know people in glass houses shouldn't throw stones, but Simon doesn't adhere to the adage when he encounters Gordo (Edgerton), an old high school acquaintance whom he hasn't seen (or even thought about) in 25 years. Shy, reserved, and socially awkward, Gordo hopes to rekindle his "friendship" with Simon and latches onto the couple like a lost puppy, dropping random gifts on their doorstep and ingratiating himself into their lives. Robyn, who recently suffered a miscarriage, desperately wants a child and battles an encroaching feeling of emptiness that makes her sympathetic to the lonely, needy Gordo, despite receiving uncomfortable vibes from him. Simon, however, nicknames him "Weirdo" and quickly loses patience with the constant intrusions.

One night, Simon lashes out at Gordo and severs their tenuous ties, but soon after the couple's dog goes missing for several days. Both Simon and Robyn believe Gordo kidnapped the canine, but their efforts to involve the police prove fruitless. To deal with the stress, Robyn resorts to taking prescription painkillers, which she relied upon to excess back in Chicago, and when Simon discovers some stray pills, he confronts her. Underlying tensions in their marriage then begin to surface and prompt Robyn to wonder how well she really knows her husband, and whether there's more to Simon and Gordo's connection than meets the eye.

The moral questions that swirl about 'The Gift,' as well as the tale's myriad layers, make it interesting and help fuel its suspenseful aura. All the characters harbor secrets that put their relationships on shaky ground, and Edgerton's tightly woven script subtly navigates the minefield, often taking unexpected turns that keep us guessing. Things are never quite what they seem, and our sympathies tend to buffet about, heightening the sense of confusion. Though many have rightfully compared the story to 'Fatal Attraction' (yet, rest assured, there are no boiled bunnies in this universe), the screenplay also owes a tip of the hat to Lillian Hellman's groundbreaking play 'The Children's Hour' and Ira Levin's 'Rosemary's Baby,' both of which deal with manipulative, off-kilter people whose actions wreak havoc on others.

Bateman displays all the facets of his engaging personality and turns them upside down, filing a marvelous change-of-pace portrayal that runs the gamut of emotion. Hall complements him well, deftly using her wide eyes to pierce through everyone's personal veneer and discern their true nature. And though Edgerton pops in and out, always turning up like a bad penny, he inhabits the obsequious Gordo well, inspiring an appropriately crazy mixture of fear, dread, intrigue, and empathy. Watching this trio interact is great fun, and everyone keeps it refreshingly real...a rarity for this over-the-top genre that's often defined by cardboard stereotypes.

'The Gift' is anything but predictable, and hangs together well on a second viewing. Like 'Fatal Attraction,' it's an elegant, eerily relatable cautionary tale with identifiable characters and situations, peppered with a few palpable jolts. Yet unlike that '80s icon of terror, it doesn't careen off the deep end, despite a humdinger of a finale. As a director, Edgerton shows promise, and he's made a popcorn thriller that impresses, satisfies, and makes a sober, meaningful statement. Not bad for a first effort, and hopefully a preview of coming attractions. 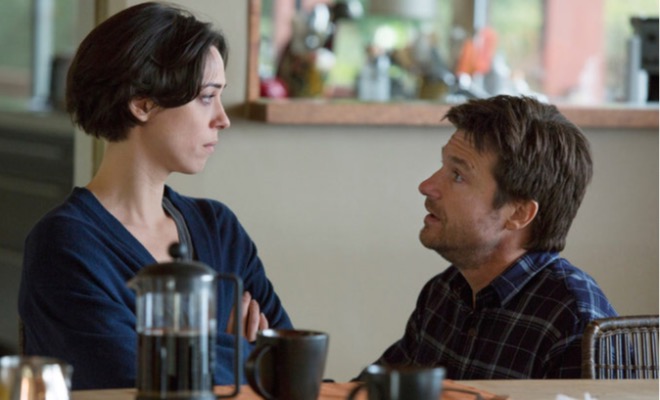 'The Gift' arrives on Blu-ray packaged in a standard case inside a sleeve with raised lettering. A leaflet containing a code to access the Digital HD copy is included, along with a DVD copy of the film. Video codec is 1080p/AVC MPEG-4 and audio is DTS-HD Master Audio 5.1. Once the disc is inserted into the player, previews for 'Unfriended,' 'The Secret in Their Eyes,' 'Self/less,' 'Trainwreck,' and 'The Loft' precede the static menu with music.

Like the characters that populate the film, the transfer of 'The Gift' is appropriately cold and sterile, with few punchy moments to engage the eye. The 1080p/AVC MPEG-4 rendering from Universal sports a rather wan color palette that aptly reflects the characters' angst and unease, with dull, washed out hues predominating. Shot digitally by Eduard Grau, 'The Gift' lacks the crispness we expect from the process, but clarity remains strong, especially in the close-ups of Bateman and Hall, which spotlight his scruffy cheeks and her pale complexion, respectively. Contrast is a bit muted, which dilutes the black levels just a tad, but fleshtones are natural and stable, and shadow delineation is quite good during nocturnal scenes. A grittiness that could be mistaken for noise occasionally creeps into the picture, but the effect appears to be intentional and never intrudes upon the story. All in all, this is a successful effort that flaunts a natural look, which enhances our connection to this highly relatable and disturbing tale.

An active and immersive DTS-HD Master Audio 5.1 track instantly sets a creepy tone and sustains it throughout the film's course. Bass is the star of the mix, with pulsating low-end tones, weighty rumbles, and booming accents heightening suspense. Subtle surround activity and solid stereo separation across the front channels serve the atmospherics well, and the eerie music score by Danny Bensi and Saunder Jurriaans benefits from superior fidelity and fine tonal depth. All the dialogue is clear and easy to comprehend, and a wide dynamic scale handles all the highs, lows, and volume swings without any hints of distortion. Though far from a sonic feast, this lean, mean track accomplishes its goals with a minimum of fuss and never breaks the narrative spell.

A few extras enhance the disc, but more beefy featurettes would have given this package the gravitas it craves.

A gift for fans of intelligent, relevant thrillers, 'The Gift' favors psychology and twisted relationships over violence and gore, and the result is one of the most satisfying and involving suspense flicks of 2015. Joel Edgerton's directorial debut is taut and deliciously twisty, but the pieces all fit snugly together, and the relatable subject matter puts an involving and disturbing spin on the material. Universal's Blu-ray presentation features solid video and excellent audio, but the generic supplemental package is a disappointment. Unlike other genre entries, 'The Gift' delivers on a host of different levels, which makes it easy to recommend even to those who don't normally gravitate toward this type of fare.

Sale Price 9
Buy Now
3rd Party 28.99
In Stock.
See what people are saying about this story or others
See Comments in Forum
Previous Next
Pre-Orders
Tomorrow's latest releases