While video chatting one night, six high school friends receive a Skype message from a classmate who killed herself exactly one year ago. A first they think it's a prank, but when the girl starts revealing the friends' darkest secrets, they realize they are dealing with something out of this world, something that wants them dead.

The "found-footage" subgenre, a particular style of filmmaking which frankly wore out its welcome almost as quickly as it came to sudden prominence and popularity nearly twenty years ago, has taken its next logical evolutionary step in 'Unfriended.' In fact, I'm not entirely sure the movie accurately falls under that definition -- since according to certain details expressed throughout the story, the footage seen survives in the abstract, intangible reality of cyberspace. Unlike other cinéma-vérité types, there doesn't exist physical evidence of the events, such as film reels, a video cassette or even a hard drive from a digital device. Everything occurs and is seen thanks to apps and social media websites like Skype, Facebook and YouTube. What's unique about this particular production is that the plot is set in real time from the rather bizarre point of view of the main protagonist's laptop screen. And surprisingly, it makes for an entertaining watch of a fairly familiar supernatural tale.

As one of the characters points out — and which the filmmakers reemphasize in the closing moments — the terror a group of six friends experiences will live on in the realm of electronic networks, as a swarm of 1s and 0s floating through an invisible domain beyond our physical reality. In essence, director Levan Gabriadze ('Lucky Trouble') makes the comparison of the internet to that of the supernatural, almost as if the two might possibly coexist within the same plane of reality — or rather, non-reality. Working from a script by Nelson Greaves of the 'Sleepy Hollow' series, the Georgian-Russian born filmmaker, making his American debut, seems to also take the opportunity of commenting on the current state of mass communication. Friendships in the 21st Century are about as real as the imperceptible cyberspace or as genuine as the cold, hard plastic devices used for communicating, and those same friendships can dissolve as instantly as posting unflattering, embarrassing pictures or videos.

But very subtly implying these ideas is about as far as Gabriadze is willing to go. The focus is dead set on this real-time gimmick, and shockingly, it's effective. Most impressive is the fact that the filmmakers somehow manage to turn such a simple high-concept stunt into a creepy experience, even when the gimmick starts to wear pretty thin in the final quarter. Other than the digital friendships becoming the reality, Gabriadze tackles the more worrying issue of cyberbullying and the damaging effects the internet can have when we no longer feel secure of our privacy. Intimate, private moments, no matter how humiliating or injurious they may be, can suddenly be shared for all the world to see, including a poor teenage girl's suicide, which is how this particular film commences. Blaire (Shelley Hennig) switches between that video and another of her childhood Laura Barns (Heather Sossaman) drunk and passed out. The humiliation and taunting she experiences afterwards led to the girl's unfortunate death. 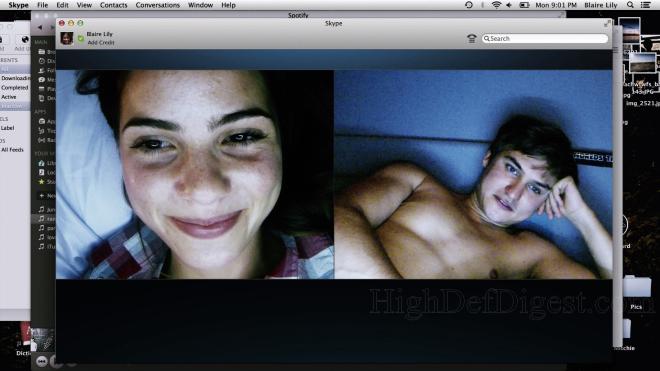 Honestly, it's a rather brilliant tactic, delivering the pertinent exposition in a matter of a couple minutes, and it's done without any talking, excluding the YouTube footage. Of course, the connection between the events leading up to Laura's suicide, which occurred the previous year, and the story's current timeframe are not made clear until moments later, but the setup is vivid, quick and to the point. Then, Blaire is interrupted by her boyfriend Mitch (Moses Jacob Storm) via Skype, and they are later joined by four more friends, Jess (Renee Olstead), Ken (Jacob Wysocki), and Adam (Will Peltz). As quickly as Gabriadze sets up the story in the opening minutes, he immediately injects the conversation with an air of mystery when a faceless account going by the name "billie227" refuses to go away in spite of the kids' efforts to hang up on the unidentified caller. The situation grows creepier when Blaire then starts receiving Facebook messages from Laura and the caller also claims to be the dead girl.

Naturally, the kids believe the account was hacked by someone playing a cruel prank on the one-year anniversary of Laura's death, which is part of the fun of 'Unfriended.' We are not told the truth of the caller's identity and the mystery is sustained for a good chunk of time until another friend Val (Courtney Halverson) joins the conversation, and things intensify when the kids' secrets are suddenly revealed, especially each of their involvement in Laura's suicide. The film lacks a traditional score, although songs occasionally play in the background via iTunes or Spotify, but Gabriadze and sound designer Paul Berolzheimer use bass to amplify certain scenes, a very subtle low rumbling effect that effectively heightens the suspense. Then, for the horror hounds out there who love their gore, the deaths are brutal and graphic, short burst-like glimpses of explicit carnage. The movie, which understandably received an R-rating, will go down as one of the great, creepy surprises of the year because, despite the concept sounding ridiculously dumb, it delivers the goods with amusing success.

Universal Studios Home Entertainment brings 'Unfriended' to Blu-ray as a two-disc combo pack with an UltraViolet Digital Copy. The Region Free, BD50 disc sits comfortably opposite a DVD-9, and both come inside a blue, eco-elite case with a shiny, glossy slipcover. After several skippable trailers, viewers are taken to a static menu with music.

The cyber-chiller debuts on Blu-ray with a fantastic 1080p/AVC MPEG-4 encode (1.78:1) that doesn't look very promising at first, but it is consistent right from the start and, after a while, look pretty darn good. It's not exactly the type to impress friends, but the high-def transfer is faithful to the creative intentions of the filmmakers.

Contrast is comfortably bright and crisp, similar to the glow of a laptop, of course. This allows for excellent clarity and visibility of the tiniest detail on the faux screen. Every app and icon are distinct, lettering atop each window is smooth and sharp, and the faces of the actors is surprisingly revealing, exposing negligible blemishes and pores during various close-ups. Black levels are rich and true although they can appear a tad faded in a couple spots or much too strong to obscure shadow details, but it's possibly a deliberate choice. Colors are none too impressive through the Skype screen, but they are nonetheless accurate and vivid in a few scenes.

The cleverly hip thriller continues posting shivers down your spine with a stylishly yet effective DTS-HD Master Audio soundtrack. Seeing as how the plot revolves around a Skype conversation, the design is, not surprisingly, a mostly front-heavy presentation with a good chunk of the action seemingly taking place in the center.

It probably goes without saying then that vocals are distinct and audible throughout. A few moments, especially when Blaire or the "ghost" suddenly decide to play music, the soundstage widens to stereo sound, exhibiting excellent detailing and fidelity in the mid-range. The loud, jump scares are deliberately distorted but not egregiously so, maintaining distinct clarity throughout while displaying flawless movement between the channels. In fact, it's during these moments also that the listener is reminded they are enjoying surround sound, as few minor, echo-like effects bleed into the rears.

Probably the most shocking aspect of this entertaining lossless mix is a powerfully clean low-end, employed as a surprising scare tactic but also during a few interesting, silent scenes. Used at the creepiest moments, particularly for building tension and suspense amid seemingly cordial conversations, a very low rumbling effect that digs below 20Hz growls through the room, making the couch vibrate ever so gently (bass chart). It's fun little moments like that that really make the high-rez track enjoyable.

Taking the "found-footage" subgenre to its next logical step, 'Unfriended' surprises with a concept that sounds ridiculous on paper but shockingly delivers the scares with amusing effectiveness. The Blu-ray arrives with an excellent audio and video presentation that's faithful to the creative choices and intentions of the filmmakers. Although the movie doesn't come with any bonus features, the overall package is still worth checking out for the curious and devoted horror fans everywhere.

Sale Price 12.98
List Price 34.98
Buy Now
3rd Party 2.13
In Stock.
See what people are saying about this story or others
See Comments in Forum
Previous Next
Pre-Orders
Tomorrow's latest releases