Since she was a little girl, Amy (Amy Schumer) has been taught that monogamy isn't realistic. Now a magazine writer, Amy lives by that credo, enjoying an uninhibited life free from stifling, boring romantic commitment. But when she finds herself starting to fall for the subject of a new article she's writing, a charming and successful sports doctor (Bill Hader), Amy starts to wonder if other grown-ups, including this guy who really seems to like her, might be onto something.

Given her success over the past few years and her recent, quick rise to A-list celebrity status in the last year, I honestly expected a bit more from Amy Schumer for her big-screen debut in 'Trainwreck.' Don't get ne wrong, I still walked away from the movie satisfied and laughing from much of the vulgar, sexualized humor. Only, after following her career since before her award-winning sketch comedy series 'Inside Amy Schumer,' I've grown accustomed to anticipating a good deal of off the wall and completely unpredictable gags from the consistently hilarious comic. And while I was, of course, surprised by several eye-popping character exchanges — Tilda Swinton as fearlessly macho magazine editor Dianna assigning Vanessa Bayer's poor, foolishly naïve Nikki to test if garlic has any effect on the taste of semen had me laughing so hard it hurt — I found myself often sitting there in silence waiting for the next unforeseen joke. Perhaps, this is a good lesson for the dangers of setting expectations too high and the importance of walking into a feature with a clean slate.

Much of the joy in Schumer's brand of raunchy comedy is the level of insightful subversion and intelligence hiding beneath layers of perceived lewdness, unfiltered profanity and seemingly unladylike behavior. Whether it's in her standup routines or on her smash hit basic cable show, she frequently pokes holes at customary assumptions and expectations of women with several terrifically funny cracks at traditional female roles and the treatment of women issues within the sociopolitical sphere. Schumer has successfully infiltrated, arguably better than any other comedienne working today, a region of comedy that mainstream society has traditionally only embraced men to perform: a direct, in your face and frank discussion about sex without the cutesy innuendoes or insinuations. This brazen, devil-may-care attitude is what has set her apart from other equally talented comics and lead to her success. And, well, I initially — mistakenly so — anticipated something of this caliber when I first read Schumer was set to star in a movie written by her and directed by Judd Apatow. 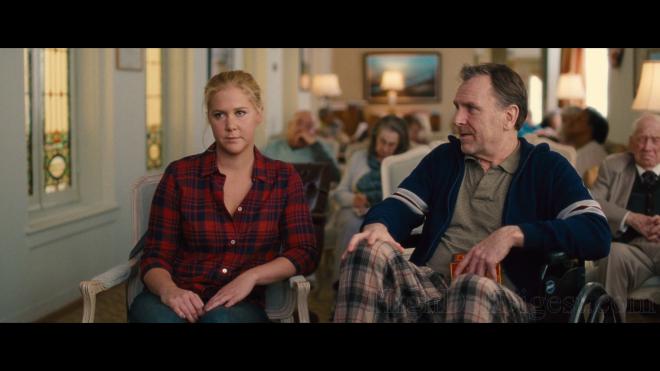 To be fair, the film is a bit more salacious and crude than the typical romantic comedy, showing once again that women can be just as foul-mouthed and sexually upfront as only Schumer can. So much of what I enjoyed, and honestly love, about the movie was its openness of 21st Century relationships, allowing actors like John Cena the opportunity to show their comedic side — his sex scene with Schumer where he tries to talk dirty to her has to be one of the craziest and most hilarious laugh-out-loud moments I've had in a very long time. There's an obvious attempt at making known that romcoms can be R-rated and still manage to turn the tables on the formula — even if only slightly, because honestly, it's not like anyone is rearranging the furniture here. While Schumer's character is the non-committal, one-nightstand, functioning alcoholic who learned her sexual morals from her womanizing father (Colin Quinn at his best), the men are the ones pursuing commitment, which is where Bill Hader's sports doctor Aaron Conners comes in to Amy's dismayed reluctance.

It's a nice twist to the blueprint, to be sure, and a move that ultimately works to the movie's advantage, but that's really it. That's all there is to it. Yes, 'Trainwreck' is refreshing and terrifically funny, but it's hardly genre-bending or pushing the envelope — which is not to say that's what Schumer and Apatow were aiming for. After 'Sex and the City,' 'Bridesmaids,' 'Bad Teacher' and 'Friends with Benefits,' which are from five years ago or older, it's reasonable to maybe expect something that would push the subgenre further, especially when coming from Amy Schumer. There's a sense that the filmmakers — perhaps, at the behest of producers and studio heads — wanted to play it reasonably safe, which is apparent when we consider a predictable conclusion that's both quirky and a tad too sappy. Admittedly, this one and only gripe with the production is nowhere near enough to suggest loyal fans won't absolutely love it or neophytes won't enjoy it because like with anything Schumer does, there hides a charming, lovable dope beneath the booze and vulgarity.

Universal Studios Home Entertainment brings 'Trainwreck' to Blu-ray as a two-disc combo pack with a code for an UltraViolet Digital Copy. The Region Free, BD50 disc sits comfortably opposite a DVD-9 inside a blue, eco-elite case with a glossy, lightly embossed slipcover. The Blu-ray includes both the 125-minute theatrical cut and an extended unrated version that adds four minutes of raunchier and more vulgar dialogue, bringing the total runtime to 129 minutes. After a few skippable trailers, viewers are taken to a menu screen with the usual options, full-motion clips and music.

The Apatow-Schumer collision stumbles and staggers its way onto Blu-ray with a generally satisfying and strong AVC encode, but much of the presentation largely seems bland and flat. Seeing as how it was shot on 35mm film, it's possible it might be an intentional choice though not sure how the rather flavorless look would serve a raunchy comedy like this one. The overall picture displays good resolution and excellent visibility of background information thanks to a clean, stable contrast and comfortably bright whites. However, brightness levels are noticeably affected, making blacks appear pretty grimy and cloudy while shadows seem murky, which is the worst visible problem.

Although the 2.40:1 image lacks depth and fails to impress much, the freshly mastered transfer thankfully comes with nicely saturated primaries, especially reds and greens, and secondary hues provide some warmth but also do little to give the video a lively appeal. Fine lines and objects are well defined with several moments that are sharper than others. On the other hand, many scenes are also fairly soft and blurry, which appear to be the result of the deliberate photography choices, many of which occur during nighttime and poorly lit sequences. Flesh tones are healthy with appreciable detailing during close-ups, but altogether, the presentation won't likely dazzle viewers.

The sleeper hit continues the party thanks to an excellent and well-designed DTS-HD MA soundtrack that won't likely raise the roof but will surely have listeners wanting to join the fun. Being a romantic comedy, it's not surprising the rears sit silently in their respective corners for most of the festivities, keeping the audience's attention on events unfolding on screen. However, the surrounds are occasionally allowed to participate in the drunken hilarity, mostly waiting for the moment when tasked to expand and broaden the soundfield. Every once in a while, the hustle and bustle of New York streets fill the room with traffic commotion while the constant chatting and music noise of the nightclubs surround the listener. They don't happen often, but they're a welcomed addition that complement the story well.

The front soundstage is ultimately where the inebriated booze-hounds gather, creating a wide and welcoming sense of space and presence. Channel separation is quite impressive with fluid panning effects and convincing off-screen activity. The mid-range is dynamic with terrific detailed clarity during the loudest segments, which is best appreciated when the score and song selections play and lightly bleed into the surrounds. Amping up the excitement is a highly responsive and sometimes thunderous low-end adding some amusing weight to the party. All the while, dialogue remains distinct and precise in the center, making this lossless mix very satisfying.

Although I mistakenly set my expectations a bit too high, I really enjoyed 'Trainwreck' overall and laughed plenty throughout. Marking Amy Schumer's big screen debut as both star and writer, the raunchy romantic comedy is a wildly entertaining take on the genre. The Blu-ray arrives with very good picture quality and a better audio presentation. Loaded to the brim with bonus material, the package is very much worth the price of admission and should satisfy loyal Schumer fans.

Sale Price 11.93
Buy Now
3rd Party 5.99
In Stock.
See what people are saying about this story or others
See Comments in Forum
Previous Next
Pre-Orders
Tomorrow's latest releases