Ex-CIA hit-man running from his past (Malone) finds just how difficult it is to retire when he runs accross a small town controlled by mercenaries and a family that's resisting their control.

"He's playing God in this valley!"

Every big actor or actress is on the hunt for a franchise, a character they can reliably return to again and again and prove their box office worth. While Chuck Norris had his 'Missing In Action' flicks, Schwarzenegger was ramping up his time on 'Conan The Barbarian' and 'The Terminator', and Clint Eastwood was about to dig into his final outing as Dirty Harry in 'The Dead Pool,' everyman action star Burt Reynolds was cooking with fire on 'Malone.' Based on the William Wingate novel "Shotgun" and directed by Harley Cokeliss, 'Malone' feels like the beginnings of a franchise that never was. While it never got a sequel, it still stands as one of Burt Reynolds' better tough-guy 80s action flicks.

You would think that if you were the CIA's top deep cover hitman that it would be easy to quit once you lost the taste for killing random people. That makes perfect sense right? Unfortunately for Malone (Burt Reynolds) quitting was never an option as his protege and lover Jamie (Lauren Hutton) points out to him. But that doesn't stop Malone from trying. After burning his CIA Identification Card, Malone heads out on the road, traveling the country from one sleepy town to the next trying to find where he belongs. After his transmission blows, he's forced to set up shop in a sleepy rural town in Oregon.

Thankfully for Malone, the town's auto mechanic Paul Barlow (Scott Wilson) and his pretty young daughter Jo (Cynthia Gibb) are very accommodating people and put him up until the parts for Malone's busted car arrive. What should be a welcome respite for Malone quickly turns into a hornets' nest of trouble. As Malone quickly learns, a big-time real estate mogul by the name of Delaney (Cliff Robertson) is buying up all of the land in town. Those people he can't buyout like Paul, Delaney has them run off their land by his gang of thugs.

When Malone stands up to their tactics and defends Jo from being attacked, Malone becomes Delaney's primary target. With the town's Sheriff Hawkins (Kenneth McMillan) in Delaney's pocket, Malone is going to have to rely on a certain set of skills to protect his life, as well as the lives of Paul, Jo and the other innocent people in town. What Malone doesn't know is Delaney has grand designs to start a right-wing revolution to take back the country and even has connections all the way up to the CIA. With a sawed-off shotgun and a .44 Auto Magnum at his hip, Malone will have to take the fight to Delaney. 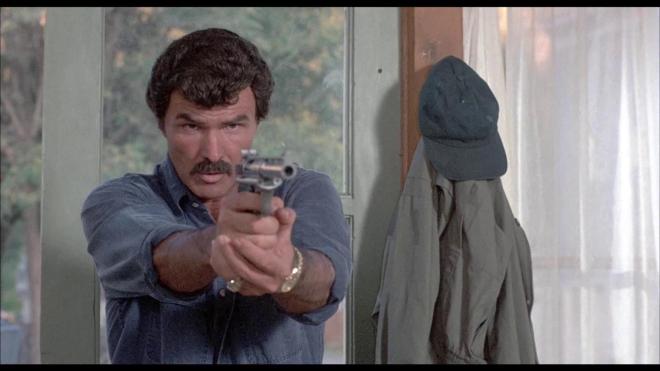 How wasn't this movie produced by Golan-Globus? It has "Cannon Films" written all over it. 'Malone' is pure late 80s action movie cheese in all of the best ways. Essentially this movie is like so many other lone hero pictures like 'Shane' or 'Walking Tall' or even 'Road House' for that matter where an outsider comes to town, sees that said town is being bullied into submission by a mafia goon or a corrupt business man and then subsequently is forced to take out the trash. It's a paint-by-numbers Action Thriller that works pretty well. The best part of the movie is whenever Burt has to pull out a really big gun and blow a gigantic hole through some poor hapless goon's chest.

As far as performances go, Director Harley Cokeliss was apparently more interested in the action sequences so the cast is pretty much left to play to type rather than be genuine characters. Burt is Burt and does what only Burt can do with a wink and a smile as he shoots up villains and blows up cars, and buildings. Scott Wilson does a decent job as a man who only wants to protect his daughter from harm and Cynthia Gibb is effectively the sheltered "Farmers Daughter" who falls for the dashing Burt Reynolds. Cliff Robertson does a decent enough job playing a particular brand of crazy and it's easily apparent that he's here for a paycheck and some fun. Some scenes he just looks bored to death, other times he looks like he was in the mood for a little ham and eggs. For what little time she's given, Lauren Hutton appears to be the only one really committed to a role and has some decent moments before her character gets refrigerated and motivates Malone to do what he does best.

Like I said, 'Malone' is cheesy fun. It feels like the beginning of a franchise where Reynolds as Malone would travel from town to town like in 'The Incredible Hulk' TV show and help people with really big guns. Sadly this didn't come to pass. Missed opportunity I guess. Reynolds gets a bad and unfair rap for making bad movies in the 80s. Honestly though, I think he was making a great product of the era that had the misfortune of coming out after better and more memorable movies. His movies are no better or worse than a lot of the schlock that passed for Action films at that time. 'Malone' is a fun ride from beginning to end. A solid "Pizza & Beer" movie that might work well paired with something like 'Raw Deal' for a double feature. If you're in the mood for some fun, you'll probably find a lot of it here.

'Malone' arrives on Blu-ray thanks to Kino Lorber and their Studio Classics line of films and is pressed on a Region A locked BD25 disc. The disc is housed in a standard case and opens to a static main menu.

'Malone' makes a nice segue to high definition with a pleasing 1.85:1 1080p transfer. The transfer was provided by FOX/MGM and is in pretty decent shape with some minor quibbles holding it back. In the plus side of things, fine film grain has been retained leading to some pleasing detail levels. Reynolds' famous stache looks incredible as do all facial features and the beautiful mountain scenery. Colors appear accurate with strong primaries.

Where the trouble starts is with the black levels and contrast. During daylight scenes, everything looks fantastic with nice inky blacks and a strong sense of depth. Darker scenes can appear crushed, and contrast blooms on anything white are very apparent and create a distracting haloing effect. Since this is clearly not a recent master, there is also a bit of noticeable edge enhancement as the image looks pretty crunchy sometimes. Banding pops up a time or two but nothing very serious. All and all, 'Malone' looks pretty good in HD, but the shape of those darker scenes kick this score down a peg or two.

'Malone' is a movie that goes from zero to sixty in the blink of an eye and this disc's English DTS-HD MA 2.0 track handles the workload nicely. As a movie that is pretending to be more somber and earnest than it really is, the front half of the film is fairly conversational. To that end dialogue mostly stays front and center and is cleanly heard throughout. When the action picks up, imaging gets a nice work out as gunfire and explosions rip across the screen and there is just the right amount of channel movement to keep the audio interesting and engaging. Levels are just fine as there really aren't any spikes or volume shifts to speak of. Without any breaks in the audio or any age-related issues, this track serves the movie well and is a nice addition to this Blu-ray.

Malone Trailer: (SD 2:00) I love Peter Cullen narrating trailers. Add in the score from 'Commando' and you have a hell of a cheesy fun trailer.

Gator Trailer: (HD 1:09) Reynolds narrates the trailer and it makes it look like a nice cheesy good time.

Sam Whiskey Trailer: (HD 2:24) I really hope the inclusion of this trailer means that Kino is working on a Blu-ray release, but this trailer looks like a whole lot of fun!

'Malone' is one of those movies that gets passed over for being just another Burt Reynolds 80s action movie. While it most certainly is that, it is also one heck of a good piece of cheap entertainment. Only Burt Reynolds can play a clean mix of tough but disinterested as an action hero! Kino Lorber has done a pretty good job bringing this flick to Blu-ray, the video has a couple problem issues but overall isn't bad, and the audio offers up plenty of extra kick for those big gun shots! Extras are only some trailers. This is still a fun release and one I'm willing to call Recommended - for Burt Reynolds and 80s action fans.