Sometimes a short story is good enough. When you've only got a little bit of material to work with that can last only so long, it's probably best to keep it short rather than stretch it out longer than necessary. It's for this very reason that I've had a long love for horror anthologies. Movies like 'Tales From The Crypt,' 'Vault of Horror,' 'Tales From The Dark Side,' 'Creepshow,' and 'Trick'r Treat' provide solid frights while keeping things short and sweet. The shorts don't always have to be the best, they just need to do their job and provide a jump or two. Mario Bava's 1963 flick 'Black Sabbath' aims to provide some good frights with three tales of terror.

The Drop of Water

Helen (Jacqueline Pierreux) is a nurse who has been called to a gigantic mansion to prepare the body of a dead rich woman.  It turns out that woman happened to be a famous psychic who made heaps of cash talking to the dead for her clients, and also had an affinity for large gaudy jewelry - rings in particular. As Helen is prepping the body for burial, she gives into temptation and steals one of the rings from the woman's deceased finger. After returning home, Helen is driven mad by the sound of dripping water throughout her home. When the ghost of the psychic returns from beyond the grave - Helen learns her night of madness and terror has just begun.

Rosy (Michele Mercer) is a beautiful lady of the night who earns a living bringing pleasure to men. As a call girl she can wrap a man's heart and desires around her finger and twist them into doing anything she wishes. One night as Rosy is getting ready for bed she gets an obscene phone call. The man on the other end of the line demands she takes her clothes off. This creep seems to know everything she's doing inside her bedroom - even when all of the windows are covered! The voice also sound familiar - like that of a man Rosy knows to be dead. Panicked she asks her friend Mary (Lidia Alfonsi) to stay with her - only Mary has reasons of her own to not like Rosy.

When Count Vladimir d'Urfe (Mark Damon) is traveling along the countryside, he comes upon the body of a man stabbed in the back by a beautiful dagger. Upon further inspection he realizes the body doesn't have a head - making it a little tough to establish proper identification of the victim. He takes the dagger with him, and as night sets in, the Count stops at a farmhouse for some shelter. He then learns that the ornate blade, in fact, belongs to the man of household named Gorca (Boris Karloff). Gorca had set off the night before to hunt down a thieving bandit that had been plaguing the area whom the locals believed may also be a wurdalek. When Gorca returns, it's become all too apparent that the bandit's evil curse has stricken the head of this small family. Gorca then sets about scheming intricate ways to drink the blood of his loved ones. 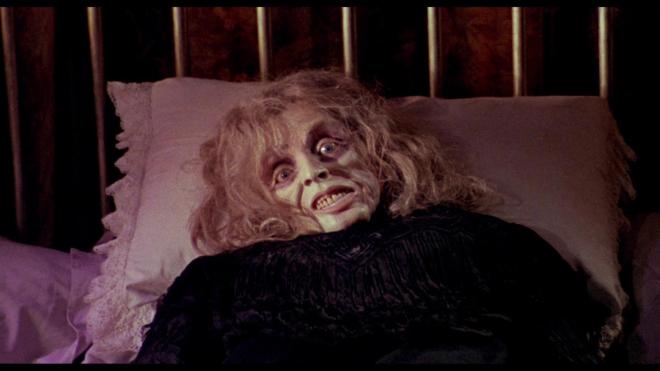 As with most Bava pictures there are multiple cuts and wildly different versions depending on release location. In the case of this release of 'Black Sabbath,' we have the US "AIP cut" of the film which runs a tad shorter and is a little bit lighter on the graphic gore effects than the European Cut. Also, this cut offers the individual stories in a slightly different order. For this one, I like how they're presented as each one gets a little bit creepier than the last and finishes with the strongest entry The Wurdalek. In between each little short, Boris Karloff gives a goofy little introduction that makes one wonder if he wasn't the prototype for the Crypt Keeper for the 'Tales From The Crypt' TV series.

As a whole, this movie is a blast from the first story on. Mario Bava offers up a number of fun frights and thrills with a steadfast confidence that makes me wish more modern horror films took their time to let the story unfold rather than jumping into cheap scares and frights. Over all I think The Drop of Water is the most horrifying as it deals with someone slowly losing their mind. The Telephone rings of a shorter version of 'The Evil Eye' but is still quite effective. My favorite of the three stories is easily The Wurdalek - there is just something classical about this short and having Karloff actually in the feature makes it all the more resonate and just damn creepy.  Watching him play the loving grandfather to a small boy knowing full well his real intention is to kill the kid and drink his blood is freaky to say the least.  I know most people have a love for The Drop of Water, but this one harkens back to the monster movies of old and I've long had a greater love of those black and white classics.

At just 92 minutes, 'Black Sabbath' knows how to take its time. Each short is like watching a slow burn as the horror and scares slowly but deliberately become more and more intense. The Karloff introductions are a bit cheesy, but he's there to serve as sort of visual pallet cleanser so you get a fresh flavor of horror with the next story. To say, "they don't make them like they used to" is a bit of an understatement. I wish horror anthologies were still a thing to see every year or so, if not as a film than as a television show. Just because the stories are short that doesn't mean they're not sweetly terrifying!

'Black Sabbath' arrives on Blu-ray as part of Kino Lorber's Studio Classic's line. Pressed on a Region A locked BD25 disc, it comes housed in a standard case and opens directly to the main menu.

The AIP cut of 'Black Sabbath' makes for a fairly decent HD upgrade with this 1.85:1 1080p Blu-ray presentation. Colors have that bold 60s psychedelic vibrancy that one would naturally expect while at the same time they're very soft and subdued in places. With film grain retained, detail levels are very strong and offer a great deal of clarity, especially when looking at all of the intricate costuming and set design on display. There are a few scenes that come off as being very soft looking and there is a particularly rough bit of image jitter during the closing moments of The Drop of Water. It almost looks like the image was improperly zoomed in optically as the image shakes about the screen. thankfully this is a brief moment and the rest of the film is very stable. Black levels are dark and inky, there is some slight crush here and there, but overall, the transfer has a fantastic sense of depth that lends itself well to the film giving it a nice creepy vibrancy.

Sporting a strong English DTS-HD MA 2.0 audio track, 'Black Sabbath' has a fun time with this mix. Sound effects, dialogue and the score from Les Baxter have plenty of space surrounding them allowing each element to sound crisp, clean, and natural. With how deliberate the pacing is for each of these shorts, the audio is an essential element. Each short has a nice sense of ambient and atmospheric space allowing the sound to feel real and present in each scene. Considering the filming techniques the imaging is a bit flat, but the mix is still very strong. Thankfully there aren't any age related anomalies to report making this track a very impressive listen.

Audio Commentary: Film Historian Tim Lucas provides a lot of behind the scenes information about the production and Bava. It's clear the man is a fan of the film so it helps this track become a fun listen.

Theatrical Trailer: (HD 2:22) A fun and colorful trailer that sells the movie nicely.

Crimson Cult Trailer: (HD 2:03) Another fun trailer that suggests 'The Crimson Cult' as being a solid double feature partner to 'Black Sabbath'

Horror movies are a dime a dozen. Tons of them are made every year, but few turn out very well. Mario Bava's 'Black Sabbath' is one of those movies that stands the test of time and remains a classic to this day - no matter which version of the film you're looking at. With a strong A/V presentation and a couple decent extras, I'm kind of bothered that Kino Lorber didn't see fit to put both cuts of the film into a single release as they did with 'Evil Eye,' but just the same it's nice knowing they have both versions out there. For my money I'm calling this one recommended. Fans should be pretty happy with this release.

Sale Price 21.77
List Price 24.95
Buy Now
3rd Party 15.69
In Stock.
See what people are saying about this story or others
See Comments in Forum
Previous Next
Pre-Orders
Tomorrow's latest releases