Tales From the Crypt/Vault of Horror

Tales from the Crypt: Prepare for a "gruesomely spine-tingling and stomach-wrenching" (Variety) journey into the heart of terror! When five unwary travelers with dark hearts stumble into a series of catacombs, they find themselves in a cavern with no way out. But the horror's only just begun as a mysterious figure appears to reveal to each person the chocking events that will soon lead to their well-deserved, untimely and unavoidable deaths! Starring Joan Collins, Peter Cushing, Roy Dotrice, Ian Hendry, and Ralph Richardson.

Vault of Horror: Get ready for to descend into the darkness of horror! In this "frequently macabre and eerily funny" (Cue) collection of tales, five unsuspecting hotel guests step out of an elevator into a vault deep underground. Trapped with no way out, each guest shares a gruesome story of an encounter with death. But as the stories unfold, the men begin to suspect that their presence in the vault is no coincidence, and they may have already found that the only way out...is death! Starring Terry-Thomas, Tom Baker, Daniel Massey, Glynis Johns, Mike Pratt, Anna Massey, and Curd Jürgens.

Five spooky tales of the macabre and morbid are divulged in Freddie Francis's 'Tales from the Crypt,' a horror anthology based on the illustrated stories published by EC Comics. Told in amusing campfire style while touring old catacombs, five complete strangers are held against their will inside a large, grimy, dingy stone room by a mysterious hooded man staring at each person with burning, judgmental intensity. Ralph Richardson plays the Crypt Keeper with a grave, serious presence that's both creepy and condemnatory, looking like a figure of death and misery rather than the rotting corpse most are now familiar due to the TV series. It's not clear why he's there with such disapproving fierceness or how the five, somewhat arrogant strangers are related. But when he starts talking with disparaging severity to each, we can't wait to hear their delectably gruesome, horrid tales that will explain to bring everything together.

Given this elaborate and mysterious setup, and especially after the first story with a murderous wife (Joan Collins) getting her just-deserts at the hands of homicidal maniac dressed in a Santa outfit (Oliver MacGreevy), it doesn't take long to figure out what is originally meant as a surprise twist at the end. And with that said, the morality-tale aspect to each segment can seem forced or a bit hokey, but for the period in which the production was made, the poetic justice device justifies the violence and scenes of pure wickedness. Although quite twisted, the modern take on W. W. Jacobs' "The Monkey's Paw" is arguably the weakest of the bunch, and the final tale with a group of blind men giving their tyrannical director a feel of losing one's eyesight doesn't make for a strong finish. The story of uppity neighbors (David Markham and Robin Phillips) ruining the life of the kindly widower (Peter Cushing) is both sad and haunting. Personally, the best of the anthology is the family man (Ian Hendry) who abandons his family and discovers a festering shock in the mirror. (Movie Rating: 4/5) 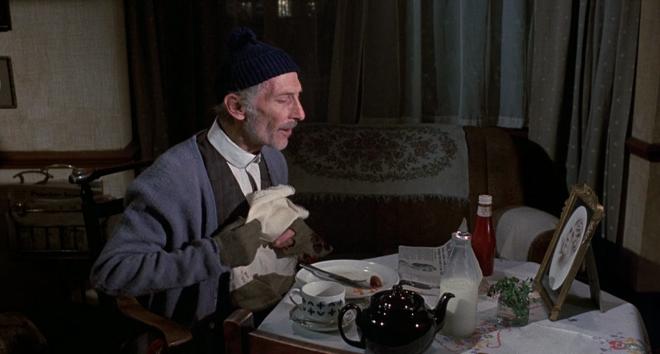 The Vault of Horror

Like its predecessor, 'The Vault of Horror' is an anthology piece based on the stories by EC Comics and commences in much the same fashion. Only, rather than taking place inside catacombs hosted by a mysterious hooded caretaker — in fact, this adaptation does away with the haggard witch-like Vault Keeper altogether — we open with extreme wide-shots of contemporary London that stealthily close in on an empty elevator inside a seemingly random business building. While opening credits fade in and out, five strangers board, each pushing buttons for different floors, but they eventually realize they are all heading in the same direction. To the sub-basement, almost as if to imply the men are destined for the lower-depths of hell. It's an amusing opening that cleverly builds the tension and uncertainty in a sequel from 'A Night to Remember' director Roy Ward Baker that clearly desires to be the equal of Freddie Francis's movie.

And for the most part, this immediate follow-up, which literally hit theaters the following year, is on par with 1972's Amicus Productions horror collection. And as with the first flick, a couple creepy tales are stronger than others, though on the whole, they're refreshingly perverse and delightfully wicked with a satisfying twist in the final moments, in spite of it being predictable from the start. The five strangers (Daniel Massey, Terry-Thomas, Curd Jürgens, Michael Craig and Tom Baker) gather around a table inside a white modern room, and as they partake in a few drinks, they each share their recurring nightmares to ward off boredom. The segment about being buried alive for an insurance scam is arguably the weakest, immediately followed up by the painter and his voodoo powers, which is unfortunate since they finish the movie. However, "The Neat Job" and "Midnight Mess," which are at the start, make the horror compilation an enjoyable and worthwhile continuation. (Movie Rating: 3/5)

Shout! Factory brings 'Tales from the Crypt/Vault of Horror' to Blu-ray as a double-feature two-disc release under the distributor's Scream Factory line. Both are Region A locked, BD50 discs with the first containing the two films and housed inside a regular blue case on opposing panels. The second disc comes with two versions of the sequel: the original 93-minute theatrical cut and an open matte 96-minute uncut version. At startup, the first disc goes to a static screen with music where viewers can choose between the two movies, and then taken to the standard menu screen with full-motion clips.

The crypt keeper tells his gruesome tales with a shockingly good 1080p/AVC MPEG-4 encode that looks far better than one could have hoped for or expected. The 1.78:1 image displays brilliant contrast with clean, comfortably bright whites throughout, allowing for excellent visibility. A couple frames show ringing around a few objects, but it's thankfully nothing too distracting. Black levels are true and accurate with strong shadow delineation while colors are richly-saturated, providing each creepy tale with energy. Fine object and textural details are quite sharp and very well-defined, often astonishingly so, especially during close-ups. (Video Rating: 4/5)

The five deliciously wicked tales escape the vault with another splendid 1080p/AVC MPEG-4 encode that gives the movie new life. A few scratches, white spots and specks of dirt can be seen on occasion, but it's nothing so severe as to distract or ruin the movie's enjoyment. Overall, the elements appear to be in great shape, offering sharp definition and strong, distinct details in the clothing, furniture and various buildings. Facial complexions are healthy and revealing, and colors are bold and cleanly-rendered throughout. Contrast is well-balanced and comfortably bright with crisp whites while black levels are accurate with good shadow delineation, providing the 1.78:1 image a nice, film-like appeal. (Video Rating: 4/5)

The high-pitched gurgling screams are spine-tinglingly effective in this frightfully entertaining DTS-HD Master Audio mono soundtrack. Though not quite the equal of the video, displaying a good deal of noise and hissing in the background, the lossless mix still provides a strong, healthy sense of presence. Though intelligible and distinct, vocals unfortunately reveal lots of crackling, popping and sizzling-like noises. On the bright side, dynamic range is crisp and very well-defined with detailed highs and warm mids, creating a welcoming and satisfying soundstage. The bass is also pleasant and adequate for a film of this vintage. (Audio Rating: 3/5)

Like the video, the vault squeaks and creeks open with a very good DTS-HD MA mono track that's not only cleaner than its predecessor but also provides a slightly stronger presence and clarity. Dialogue is well-prioritized in the center with excellent intonation, and imaging feels surprisingly broad and welcoming. Background noise and activity is distinct with various discrete effects that nicely pull the listener into each creepy segment while Douglas Gamley's score expands the soundfield with rich clarity in the orchestration. The mid-range provides clean definition and separation without a hint of distortion, and low bass satisfies with a hearty weight in the music and action. (Audio Rating: 3.5/5)

Based on the illustrated stories published EC Comics, 'Tales from the Crypt' features five delectably twisted tales hosted by a hooded Crypt Keeper. 'The Vault of Horror' is the sequel that released the following year, and although not as strong, it remains a satisfying and entertainingly fun watch. The Blu-ray arrives with great-looking picture and sound for both, better than could be expected for a pair of vintage minor horror classics. Except for a trio of different versions for the sequel, supplements are sadly on the light side, but fans will want to add it to the collection nonetheless.