Overview - The film features four interwoven stories that occur on Halloween: An everyday high school principal has a secret life as a serial killer; a college virgin might have just met the one guy for her; a group of teenagers pull a mean prank; and a woman who loathes the night has to contend with her holiday-obsessed husband.
OVERALL
Recommended

Oh, the horror anthology. Where hast thou been these past couple of decades? Gone are the days when The Crypt Keeper's morbid wisecracks, the bizarre, twisted 'Tales from the Darkside,' and the creepy stories of 'Night Gallery' were a popular weekend watch. Now it seems the subgenre has been relegated to late-night reruns of the less-than-stellar 'Outer Limits' or the baffling 'Friday the 13th: The Series' on the Sci-Fi Channel . . . err, sorry, I mean Syfy. Fans have been left with practically nothing to fill the void. Of course, Mick Garris tried to reignite interest with the series 'Masters of Horror' (later re-tooled as 'Fear Itself' for NBC), but it didn't last beyond a second season. Sadly, the subgenre has faded into the memory banks of horror fiends, where it has dwelt and festered for years.

Then suddenly, out of nowhere, rumors spread over the internet of one peculiar title that aimed to fix all that. Unfortunately, just a month shy of its official October 2007 theatrical release, the movie was pulled and shelved. Rumors grew more intense, especially after it received a special one-night screening at Harry Knowles' "Butt-Numb-A-Thon" and subsequently circulated in a few horror film festivals. Early impressions claimed Michael Dougherty, writer of 'X2' and 'Superman Returns,' had created a feature that was sure to become a traditional Halloween watch, together with John Carpenter's 'Halloween.' With its four loosely-related tales surrounding the scariest season of the year, 'Trick 'r Treat' amazingly lives up to the gossip and delivers a fun-filled night of spookiness.

The film opens with an animated arrangement that harkens back to the E.C. horror comics of the 1950s and the likely influence of 'Creepshow', only with a modern twist. Then, we move on to the stories in no real chronological sequence or conclusion. Rather, the narrative follows various characters in one suburban town where things are not what they seem. And they're all interconnected by cameo appearances by Sam, a little trick-or-treater in a burlap mask. The trickster plays a more prominent role for the movie's denouement, which, by the way, is a very nicely done wrap-up from first-time director Dougherty. But for the first two-thirds, Sam is simply a cute little kid collecting candy by his lonesome and serves as a reminder of respecting Halloween tradition.

One tired couple (Leslie Bibb and Tahmoh Penikett) comes home after a costume bash to discover the penalty of blowing out a jack-o'-lantern too early. It's a good sequence, but isn't really one of the key stories. It's just a way of kicking off things, as each tale is a celebration to Halloween lore and customs, like the warnings many grew up with about checking the candy first before eating it. Dylan Baker imparts this precise lesson with some fatal consequences to a local kid. He plays a very strange and creepy school principal with a killer's tendency, and one scene here has to be the nastiest of the bunch. Another popular tradition is the telling of ghost stories and urban legends, and four particular pranksters learn the horrifying effect of taking their scare tactics too far.

The other two stories of freakish delights have the same mix of the comical and spooky. Mr. Kreeg (Brian Cox) is an old-fart with a humbug attitude who'd much rather scare children from his house than pass out candy. After denying three kids, he is visited by one who's none too happy and reminds him why he should partake of the festivities. Laurie (Anna Paquin) is a young, self-conscious 22-year-old woman waiting for the right one. Her older sister (Lauren Lee Smith) and friends try to break her out of the rut by going to a costume party in the woods. As the others go ahead without her, a mysterious hooded figure follows Laurie around town. A homage to the Little Red Riding Hood fairytale, the story comes with a very satisfying twist.

The entire film, in fact, is wickedly entertaining and loads of fun to watch. I can't imagine any true horror aficionado not falling in love with this collection of nasty little tales. In addition to 'Creepshow,' Dougherty includes several nods to John Carpenter's classic, 'Halloween.' The film's opening sequence is a clear reference to its famous POV shot; Paquin's Laurie is even ousted as a virgin; and Brian Cox is made to look like Carpenter himself. Especially enjoyable is the costume party in the woods turning into a great combination of 'The Lost Boys' and 'The Howling.' There are a few other references sprinkled all the way through, but I'll let you figure them out, because it's part of the excitement. After watching the whole thing, I must agree 'Trick 'r Treat' will become a staple of must-watch flicks every Halloween and one that no horror fan should miss. 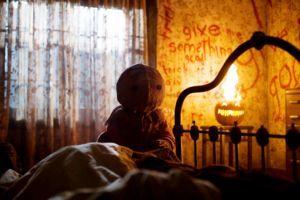 Warner Bros. debuts 'Trick 'r Treat' with a glossy and visually satisfying picture quality that more than satisfies this viewer's appetite for some Halloween excitement. Almost the entire movie takes place at night with various poorly-lit sequences, and this 1080p/VC-1 transfer is up to the task, with a strong presentation and excellent clarity of the finer details.

The film was shot with a warm palette to reflect the autumn season, and colors display this with terrific, robust saturation levels in various hues. Bloody reds and intense oranges are particularly vibrant, and facial complexions reveal healthy tones and wonderful texture. Blacks are rich and dynamic, providing the image with a great depth of field. Delineation in the deep, dark shadows is exceptionally well resolved, including many of the interior scenes. The picture displays punchy contrast levels and plenty of sharply defined visual information throughout. This works out splendidly for the flick, as we're allowed to see many of the nuances inherent to some of the creatures, as well as all the gory details in each death. While the image is not completely perfect, 'Trick 'r Treat' looks fantastic in high definition and is sure to please horror fans everywhere. 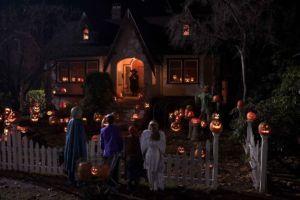 Accompanying the already enjoyable video presentation is this robust Dolby TrueHD soundtrack, which takes full advantage of the sound system to immerse the audience in all the wickedly good fun.

For a majority of its runtime, the well-designed mix is distributed evenly in the front soundstage, delivering precise dialogue reproduction and exhibiting wonderful room penetration. Vast assortments of ghastly sounds show terrific clarity and detail, generating a convincing aural presence of spaciousness and imaging. From the crunch of bones to the shredding of flesh, and from the shrieks of victims to the moans of the dead, the lossless track remains effective throughout and is nicely supported by some solid low-frequency bass. Plenty of ambient effects create mood and atmosphere, while directionality and pans are seamless and help immerse the audience in the action. As far as direct-to-video soundtracks go, the sound design for 'Trick 'r Treat' is excellent, offering an amusing and engrossing 82 minutes of Halloween evil. 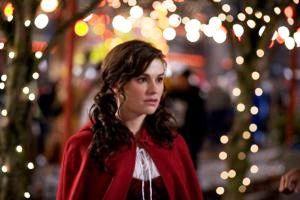 Warner Bros. releases this sure-to-be Halloween classic with a good collection of special features. Funny thing is that almost all of them are exclusive to the high-def format and only one featurette is carried over from the DVD. 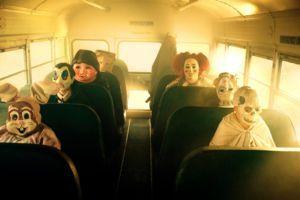 Coming off the success of 'X-Men 2' and 'Superman Returns,' Michael Dougherty makes his directorial debut in with wickedly fun 'Trick 'r Treat.' Four loosely interrelated Halloween shorts serve up just the right combination of treats for anyone looking to celebrate the spookiest time of the year. The film's Blu-ray edition arrives with a strong A/V presentation and healthy supplemental package, most of which is exclusive for high-def owners. Horror aficionados are sure to be happy with the purchase, and everyone else should check it out just in time for October 31st. This is the best Halloween movie in many years, and for many, the flick is sure to become a scary tradition!

Sale Price 19.9
Buy Now
3rd Party 5
In Stock.
See what people are saying about this story or others
See Comments in Forum
Previous Next
Pre-Orders
Tomorrow's latest releases