Master of horror Wes Craven directs this exciting visual treat which introduces a diabolical mass murderer who harnesses electricity for unimaginable killing powers. About to be electrocuted for a catalog of heinous crimes, the unrepentant Horace Pinker transforms into a terrifying energy source. Only young athlete Jonathan Parker, with an uncanny connection to Pinker through bizarre dreams, can fight the powerful demon. The two dive in and out of television programs, chasing each other from channel to channel through stunning scenes of disaster, game shows and old reruns. A blend of dazzling special effects, jolting humor and an electrifying soundtrack, Shocker is an ironic tale of terror and madness in the video age.

'Shocker' is another one of those horror features smothered and steeped in childhood memories, the period when I drove friends to the theater on a weekly basis because, for some reason, I was the only one permitted to drive. And I distinctly remember seeing this fantastically bad movie opening night in the same place I enjoyed several other notably bad horror flicks from the late eighties through early nineties. While I readily admit my enjoyment — as well as the scoring — are the result of watching through nostalgia-tinted glasses, I won't make any excuses for this Wes Craven-directed cult favorite. Frankly, the movie is just plain bad. But thankfully, not bad in terms of unwatchable. Rather, it's bad in the sense that the idea of a maniac serial killer evading justice by mysteriously becoming some sort of human electric conductor, with the power to travel through anything that runs on electricity, including human beings, is utterly hilarious.

Naturally, this being a Craven production, from a script he penned himself, the story is not without some cleverly subtle commentary on modernity. Fans of the now legendary filmmaker of such horror classics as 'The Last House on the Left,' 'The Hills Have Eyes' and 'A Nightmare on Elm Street' may remember the movies he produced from 1989 to 1996's highly successful 'Scream' as films somewhat outside his norm. They are still horror movies in the strictest sense of the word, but there was also something cynical and a tad pessimistic in his works of this period. You could almost sense the bad experiences he had from his two previous productions, 'Deadly Friend' and 'The Serpent and the Rainbow,' probably took a toll on him. Craven's movies went from deadly serious to over-the-top and comedic, as though letting loose some pent up frustration with the filmmaking business and the horror genre in general, turning familiar conventions into a laughing-stock or a source of ridicule.

To all appearances, 'Shocker' would be the first production where Craven unleashed his sarcastic grievances — which in truth is all conjecture and hypothesis based on the sudden shift in tone and style in the filmmaker's oeuvre — as evidenced by one the movie's most absurdly hysterical moments. After surviving the electric chair, the body-possessing serial killer Horace Pinker (Mitch Pileggi, better known as FBI Assistant Director Walter Skinner of 'The X-Files' series) maniacally chases after the man responsible for his capture, young college football star Jonathan Parker (Peter Berg, future film director of 'Friday Night Lights' and 'Lone Survivor'). In one of his obsessive pursuits, Pinker takes possession of a little girl freely riding her bicycle in the park, chucking the two-wheeler in a favor of a bulldozer. The scene comes to a close with an angry Jonathan uproariously pursuing the little girl, followed by her distraught mother thinking her daughter is in danger when, in fact, she's the troublemaker. 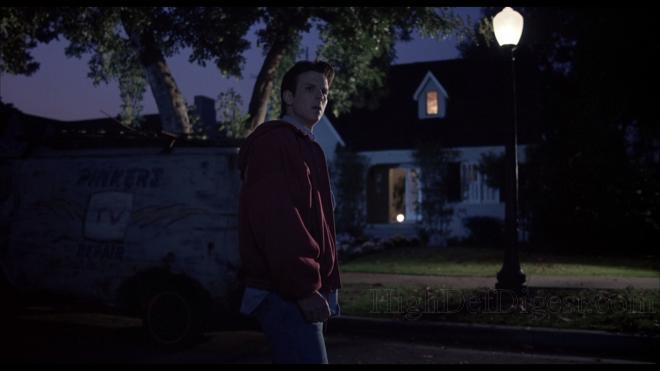 The whole thing is simply too comical to be taken seriously or ever be remotely scary, but that's precisely its charm. I'd like to believe Craven meant for it and other moments like it to expose the silliness of the familiar convention of an unstoppable killer who's conveniently always a stone's throw away from the desperate victim. And here, Pinker runs with one crippled leg, which apparently transfers over to each body he possesses, yet he's always just a few feet behind Jonathan, who, if you recall, is a university athlete. Later, as if to tire from switching from one body to the next, a ghostly Pinker realizes he can wreak his vengeance through electrical devices, namely the boob tube, and this is where the tale surrenders to the outlandish plot and goes completely bonkers. Pileggi's violent maniac even starts spewing some choice one-liners that induce as much laughter as eye rolling. ("Come on, boy, let's take a ride in my Volts Wagon!") But the pièce de résistance is Jonathan doing battle with Pinker while channel surfing and interrupting a slithering, greedy TV evangelist played by psychedelic hippie Dr. Timothy Leary.

The first half of 'Shocker' commences with some semblance of seriousness — a city living in fear of the "Family Butcher" and the hunt for the killer sets up a mystery thriller vibe. Craven also borrows from Freddy Krueger's supernatural ability to terrorize via dreams, an unexplained connection between Pinker and Jonathan that further pushes the plot's mystery elements. However, when Pinker murders Jonathan's girlfriend, Allison (Cami Cooper), and is finally executed for his crimes, the story suddenly free falls into demented wackiness. The rules for Pinker's electro-apparition, his demonic powers and his ultimate demise seem as though Craven made them up on the spot. To defeat the maniac, you only need any random heart-shaped pendant and the power of love behind it. Seriously!? Given the film's hard rock soundtrack, I half expected to hear Huey Lewis's song to blast through the speakers every time Jonathan dangled the necklace in front of Pinker's face. Now that would've been the cherry on top, but as it stands, 'Shocker' makes for a wickedly fun horror comedy.

Shout! Factory electrifies Blu-ray with a Collector's Edition of 'Shocker' under the distributor's Scream Factory line. The Region A locked, BD50 disc is housed inside the normal blue case with brand new reversible cover art and a cardboard slipcover. At startup, the disc goes to a menu screen with full-motion clips and music. Also, if you buy direct from the Shout! Factory website, fans will receive an exclusive, limited edition poster of the newly commissioned artwork with their purchase!

Wes Craven's cult favorite shocks Blu-ray with a great-looking 1080p/AVC MPEG-4 encode that slashes and blows away previous home video editions. Of course, the picture does come with a few poorly resolved and blurry moments, but they're thankfully related to the badly done CGI special effects and nothing to do with this freshly-made remaster. On the whole, the picture is clean and consistent with a very fine layer of grain throughout.

Fine lines and objects are terrifically detailed, revealing every nook and cranny in Jonathan's messy bachelor pad and Horace Pinker's dingy, dirty TV repair shop. Aside from couple negligible spots where highlights seem to bloom slightly with a hint of posterization, contrast is comfortably bright and stable, allowing for excellent visibility in the distance. Black levels could be a tad stronger, but they are, for the most part, true and accurate, providing the 1.85:1 image with appreciable dimensionality and excellent shadow details. The palette is energetic and feels rejuvenated thanks to a bold, vibrant display of primaries and warm, colorful secondary hues.

On the audio side of things, Pinker electrifies the home with heavy electric pounding music and pulsating action thanks to a highly enjoyable DTS-HD MA stereo soundtrack. Of course, as is customary to most Scream Factory releases, the distributor also offers a 5.1 surround option, but frankly, it's not very good. In fact, it's a terrible way of watching the movie because it feels cheaply done and stretched, forced to spread into the other channels, sounding much too loud and making every discrete effect easy to localize if not downright distracting. It also ruins dynamic range, creating a soundstage that feels like a thin even line across the screen with hardly any movement between various frequencies, lacking any sense of breadth and sounding offensively flat from beginning to end.

The better and preferred method of watching the movie is obviously in lossless stereo, which is more faithful to the original design and how it was originally presented in theaters. It comes with a broad spatial presence that feels natural and welcoming while off-screen background activity, such as birds chirping in the distance, the chatter of crowds and the sounds of a busy little town, is discrete and convincing. The mid-range is clean and appreciably dynamic, delivering a wide range of noises with distinct clarity and detailed without a hint of distortion. The heavy metal soundtrack clearly benefits the most as we plainly make out every guitar riff and the quick changes between each refrain. We can also feel every drum beat thanks to a hearty low-end that also provides the electrifying action with some appreciable weight. Amid the horror mayhem, vocals remain clear and precise throughout so that we can hear every corny line and hilariously deranged insult Pinker spews out.

Seeped in childhood memories from opening night, 'Shocker' is a notoriously bad horror feature, but it remains a cult favorite from director Wes Craven more for the story's absurd silliness and concept. It continues to entertain with its wild special effects and weirdly demented sense of humor. The Blu-ray from Scream Factory arrives with an excellent picture quality and a rocking audio presentation — but only in the case of the stereo track, not the lame 5.1 surround option. With a strong assortment of supplements, Craven fans will love to have this in their cult collection.

Sale Price 17.99
Buy Now
3rd Party 17.38
In Stock.
See what people are saying about this story or others
See Comments in Forum
Previous Next
Pre-Orders
Tomorrow's latest releases