From acclaimed director Ridley Scott (Gladiator, Prometheus) comes the epic adventure "Exodus: Gods and Kings," the story of one man's daring courage to take on the might of an empire. Using state-of-the-art visual effects and 3D immersion, Scott brings new life to the story of the defiant leader Moses (Christian Bale) as he rises up against the Egyptian Pharaoh Ramses (Joel Edgerton), setting 600,000 slaves on a monumental journey of escape from Egypt and its terrifying cycle of deadly plagues.

Given the current slate of biblically-inspired films in the last couple decades (there's an amazingly good number of them), 'Exodus: Gods and Kings' is really not all that terrible. Of course, this production, like Darren Aronofsky's 'Noah' and Mel Gibson's 'The Passion of the Christ,' had the budget and backing from a major Hollywood studio in order to create the kind of grand spectacle demanded of such pre-history mythology, unlike 'Son of God' and Catherine Hardwicke's 'The Nativity Story' — although both did relatively well at the box office. Indeed, Ridley Scott's epic drama is a visually dazzling and stunning adaptation of Moses, played with grim seriousness by Christian Bale, saving the Hebrew people from 400 years of enslavement to an oppressive Egyptian monarchy. If for nothing else, it is a gorgeous and detailed production, as photographed by Dariusz Wolski (the 'Pirates of the Caribbean' franchise, 'Prometheus') and designed by Arthur Max ('Gladiator,' 'Kingdom of Heaven'), but once the dust settles, the end result is a somewhat soulless and ultimately forgettable endeavor.

Although not one to quickly jump on the compare and contrast bandwagon, meaning how this holds up against other adaptations, especially well-known, and celebrated classics, in the case of Scott's action-adventure imagining — or rather, a reimagining as we're swift to discern a few minutes in — it would seem warranted so as to better appreciate and grasp where the British filmmaker of beloved favorites 'Alien' and 'Blade Runner' went wrong. The most obvious, if not also the most convenient, comparison would be to Cecil B. DeMille's 1956 Technicolor marvel 'The Ten Commandments,' a remake of his own 1923 spectacle starring Charlton Heston as the fallen Prince of Egypt. What makes this production a unique telling is the way in which the story unfolds, taking its time on the characters and the brotherly relationship between Moses and Ramesses as it strains under the weight of jealousy and distrust. Whatever the viewer's faith or lack thereof, this aspect of the plot remains central to its enjoyment and praise — sibling rivalry drives the drama to its conclusion. 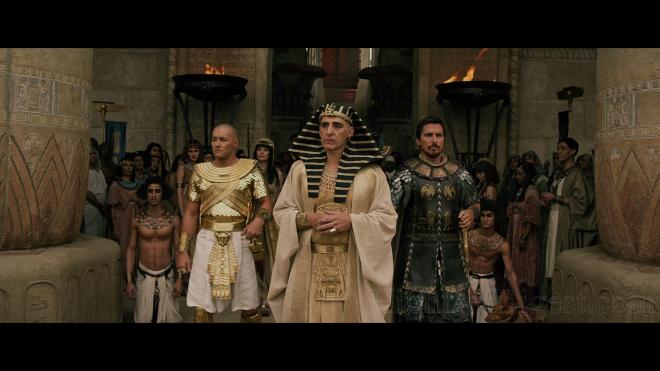 Sadly, Scott's modern take on ancient texts, from a screenplay that required four writers to complete, fails to establish a similar emotional core, even with a 150-minute runtime at his disposal. In spite of its impressively lavish production and ambitiously grandiose lens of the Egyptian period, the narrative rushes through any indication that cousins Moses (Bale) and Ramesses (thickly eye-lined but unconvincing Joel Edgerton) harbored any ill will, save for a brief moment during a battle with the Hittites where the Prince contemplates spearing Moses. For the most part, any hostilities between the two are essentially presumed from the start, culminating in an intense but nonetheless bizarre scene where an almost-unrecognizable Sigourney Weaver practically demands the death of Moses. The request comes after another hurried conversation where Ben Kingsley as Nun — who once donned the Moses title in a 1995 made-for-TV movie — reveals to Bale the truth of his origins and a prophecy yet to be fulfilled.

And surprisingly, in the face of this glaringly missing element of the plot — characterization and engaging audiences on a basic emotional level — Scott somehow manages to razzle-dazzle his viewers just enough to keep them from simply pressing stop and walking away. 'Exodus: Gods and Kings' is quite the sight to behold, demonstrating the director's skill behind the camera to beautifully frame some magnificent moments. And this being a Scott enterprise, the production is not without a great deal of creative license, allowing Scott imaginative freedom that carries a notable amount of secular undertones. Moses's journey from atheist to believer comes as the result of a head injury, leaving us to question his sanity, especially when his visions of God are conversations with an ambivalent, petulant kid with the logic to match. The plagues are given likely scientific explanations while the infamous parting of the Red Sea is due to receding waters indicating a destructive tidal wave. It's a curious twist to a well-worn tale that unfortunately is not enough to save the wrathful, near plague-like reproaches of cinephiles expecting far better from the British director.

20th Century Fox Home Entertainment brings 'Exodus: Gods and Kings' to Blu-ray on a Region locked, BD50 disc. Housed inside a blue eco-cutout case with glossy slipcover and flyer for a Digital HD copy, the disc starts with skippable trailers. There is also a 3D two-disc combo pack available, but this is a review of the 2D version. Afterwards, viewers are taken to a screen with full-motion clips, music and generic menu options.

Ridley Scott's action-adventure epic debuts on Blu-ray with a stunning and exquisite 1080p/AVC MPEG-4 encode. As beautifully photographed by Dariusz Wolski and shot entirely on the Red Epic camera system, the film amazes with a variety of gorgeous wide-shots of Spanish and Moroccan locations. Far in the distance, the tops of mountains and rocky hillsides are plainly visible thanks to spot-on contrast, making even the tiniest foliage as clear as anything in the foreground. Primaries are richly-saturated, giving the blood-red water a malignant pop, while secondary hues lavish the screen with bright golds and vivid earthy tones. Black levels are inky and true, providing an appreciable cinematic appeal and a welcomed three-dimensional quality to the overall presentation.

Presented in a 2.40:1 aspect ratio, the freshly-minted transfer also arrives with spectacular, razor-sharp definition. From the aforementioned tops of treacherous terrains to the stone blocks and pillars of the Egyptian capital, the minutest feature is exposed with striking detail. Small pits and blemishes on the surface of the various structures are evident, the puniest pebble is as distinct as the largest boulders, and the fine lines in every leaf and blade of grass are unmistakable. Each stitch and thread in the costumes is discernable, from the grimy rags of the Hebrew people to the impeccable shine in the royal garments, while facial complexions appear natural to the hot desert climate with gorgeous lifelike textures that divulge every pore and negligible imperfection.

'Exodus' migrates to Blu-ray with an explosive, reference-quality DTS-HD Master Audio soundtrack that'll viewers engaged from start to finish. From the opening moments, the design generates a terrifically enveloping soundscape, employing the surrounds for a variety of activities. When inside the grand, vast halls of the Egyptian palace, voices convincingly echo throughout while the flames of torches snap and crack all around, and during more the intimate conversations, the Hebrew homes maintain this acoustical realism with hanging lanterns and the sounds of people in other rooms. In outdoor scenes, the wind blowing through trees and the insects playing their nightly tunes are discretely heard all around while battle sequences ignite the room with the various cries, howls and mayhem of war, creating an awesomely immersive 360° soundfield.

The excitement and thrills continue in the fronts, delivering an amazingly spacious and engrossing soundstage. Those same battle sequences come with rich, detailed clarity thanks to an extensive dynamic range. Swords clang and ring with stunning realism, arrows swoosh across the screen with distinctive movement, and the massive, climatic tidal wave roars and crashes with superb definition in the upper frequencies. The music of Alberto Iglesias also benefits with striking separation in the orchestration while also extending into the rears to envelope viewers. The low-end is quite powerful and robust, energizing the room with bass that occasionally shakes the walls and seats with a few ultra-low moments (bass chart). Dialogue is precise with excellent intonation in the various voices, making this an exceptional lossless mix.

Given the slate of biblically-inspired films in the last couple decades, 'Exodus: Gods and Kings' isn't all that terrible. However, in spite of Ridley Scott's skills behind the camera, the film fails to engage on an emotional level that warrants the beautifully stunning visuals. Still, the Blu-ray arrives with a reference-quality audio and video presentation that'll tempt the most curious, and although supplements are very light, devoted fans will be happy with their purchase. Worth a look.

Sale Price 10.96
List Price 14.99
Buy Now
3rd Party 8.5
In Stock.
See what people are saying about this story or others
See Comments in Forum
Previous Next
Pre-Orders
Tomorrow's latest releases