Russell Crowe stars as Noah in the film inspired by the epic story of courage, sacrifice and hope. Directed by visionary filmmaker Darren Aronofsky.

The film is inspired by the story of Noah. While artistic license has been taken, we believe that this film is true to the essence, values and integrity of a story that is a cornerstone of faith for millions of people worldwide. The biblical story of Noah can be found in the book of Genesis.

One of the moments that's more telling about what Darren Aronofsky was trying to accomplish in his modern adaptation of Noah's ark occurs when the family gathers around a fire while surviving an apocalyptic storm inside the massive wooden vessel. The unyielding patriarch Noah (Russell Crowe doing an amazing job with a familiar character) calms his family with a creation story but adds a deeply poignant moral at the end. With superb editing by Andrew Weisblum of time-lapsed sequences pieced together to visually represent Noah's point, hints of fact-based evolution and what's currently known of Earth's formation are mixed with images of what we, as the dominant species, have made of this beautiful paradise. The rather quiet, melancholic scene at 100 minutes into the runtime is both stunning to watch on screen and a heartbreaking reality within the deluge myth.

Aronofsky's 'Noah' is an adaptation of a well-known epic fable told around the world by various cultures on every continent but depicted here from a modern perspective of ourselves and the terrible things we're capable of. Its success, what makes the film work so tremendously well, is the way the director of 'Requiem for a Dream' and 'Black Swan' with long-time collaborator Ari Handel make this ancient flood-myth motif relatable for contemporary audiences. They make no secret of viewers seeing some aspect of our world explored on the screen, as the need for cleansing the Earth of wickedness is seen as industrialization spoiling the beauty of the natural world and draining it of its resources. Added to that, the filmmakers effectively humanize the characters and their laborious toil to survive an unforgiving land while impending doom remains always in sight.

In the larger scope of things, this is ultimately at the heart of the plot, especially for Crowe's Noah. How does he concede his instinctually compassionate desire to help others with being forced to accept inevitable catastrophe and allow it to happen? Essentially, this is the character's proverbial cross to bear, an internal strife that slowly grows maddening, bringing up other thoughtful questions about the fine line between faith and lunacy. Although Aronofsky doesn't directly delve into the subject, Crowe's performance, at times, feels suggestive about at which point does one's conviction suddenly become irrational fanaticism. Noah is endlessly conflicted with doing as expected of him because what is commanded of him requires that he make unsympathetic, callous decisions while under the guise of free will, such as the horrible thought of killing newborn twins. 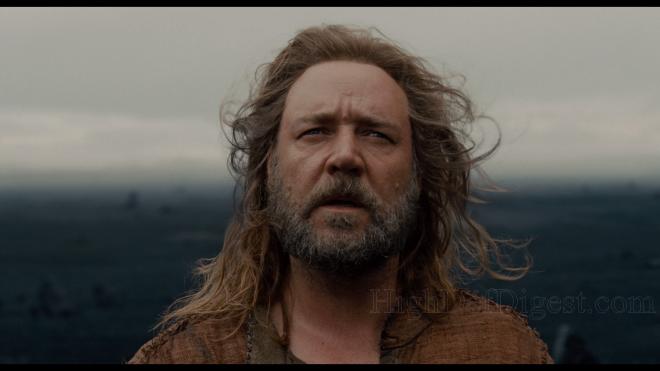 Back to that beautifully-done time-lapsed sequence serving as the film's pivotal moment, Aronofsky allows for his audience to make comparisons throughout, whether between characters or ideas. Life on its own grows and progresses into a variety of different creatures living in peace, but humanity's presence has the habit perverting utopia through greed, hate and a foolish impulsive for violence. Giving more credence to this is the excellent Ray Winstone as Tubal-cain, who in Genesis is only mentioned as a craftsman of metal and weaponry. Here, he is the antithesis to Noah's living as one with nature, a man of incredible greed who justifies ecological annihilation with a frightening intelligence that's near inspiring. Although opposites, the two men share some intriguing similarities, especially with respect to each man's desire for direct communication with their creator, like an abandoned son begging for guidance from a neglectful father, and Winstone is at his finest during these painful scenes.

Darren Aronofsky has continuously surprised and amazed me since his debut feature 'Pi,' a filmmaker of extraordinary ideas that touch on our innate desires turning into obsessions. And 'Noah' is no exception, a motion picture that like his other films should be watched not for how faithful it is to its source but rather for the ideas it is expressing. To watch it as simply another Bible story is to miss the fact that Aronofsky reminds audiences of the flood myth's lasting effect as a parable, or better yet as an ancient allegory in which we see our contemporary world conveyed. With other notable performances, like Jennifer Connelly as Noah's dutiful but endlessly agonizing wife and Emma Watson as the grateful but also grieving daughter-in-law, 'Noah' is a marvelous production of a classic myth motif that even this non-believer finds inspiring and stimulating. 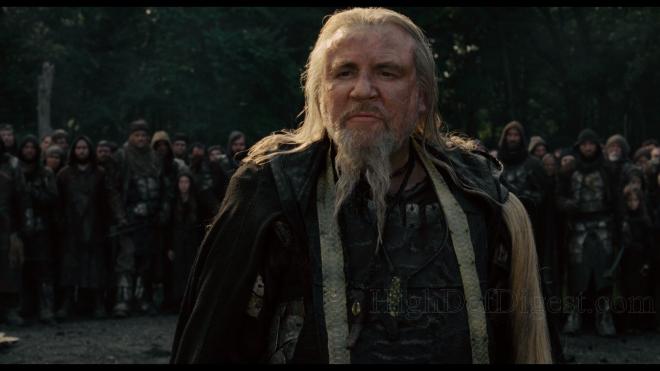 Paramount Home Entertainment brings 'Noah (2014)' to Blu-ray as a two-disc combo pack with a flyer for an UltraViolet Digital Copy. The Region Free, BD50 disc is housed inside a blue eco-vortex case with a DVD-9 on the opposing panel and a glossy slipcover. At startup, the disc goes straight to a main menu screen with full-motion clips and music.

Noah makes it rain on Blu-ray with a gorgeous and stunning 1080p/AVC MPEG-4 encode that stays true to the stylistic intentions of the filmmakers. By this, I'm mostly referring to Matthew Libatique's downcast and joyless cinematography, a palette that is purposefully grayish and dull with a few splatters of bold colors when certain scenes require them. And on that note, primaries are true to life and animated while secondary hues are cleanly rendered, providing a bit of warmth to an otherwise gloomy presentation. Contrast is spot-on and crisp, allowing for every object in the distance to be plainly visible. Brightness levels and shadow delineation could be a tad stronger, but overall, blacks are accurate and opulent.

Shot with a combination of traditional 35mm and HD digital cameras, the freshly-minted transfer is highly-detailed, with razor-sharp lines throughout. Individual leaves are distinct, and the crude stitching in the costumes is perceptible while the tiniest blemish and imperfection in the ark is crystal-clear. On the whole, the faces of the cast display excellent lifelike textures, especially during close-ups that reveal pores and every wrinkle. A few moments are not quite as sharp as others, but they're easily excused when the rest of the 1.85:1 image looks utterly fantastic.

The biblical epic continues to make a big splash with an awesomely engaging and far-reaching DTS-HD Master Audio soundstrack. The front soundstage is broad and expansive with convincing off-screen effects and superb separation between the channels, generating an effectively engaging wall of sound that’s continuous from beginning to end. Dynamic range is extensive with rich detailed clarity in the various noises, from the screams and yells of battle to the grinding movements of the Watchers. This is particularly impressive in the dramatically percussive score of Clint Mansell where individual instruments are heard with excellent acoustics and distinction. Vocals are pristine and precise in the center with the smallest change in intonation perfectly heard.

Though not earth-shattering, the low-end is amazingly deep and powerful, providing palpable, responsive weight to the action with awesome rumbling effects that resonate throughout the room. A couple moments, such as the battle for the ark sequence, hit even lower with appreciable realism. (Bass Chart) Rear activity is also effective and tremendously satisfying with outstanding directionality and flawless panning. Even quite scenes fill the room with the sounds of wind blowing in the distance, and when Tubal-cain's clan shows up, there is endless chattering and grunting everywhere. The best moment is by far when Noah's family survives the weather inside the ark, where noises of animals and the rocking of the wood vessel create an immersive 360° soundfield that's highly pleasing, making this a terrifically enjoyable, reference-quality lossless mix.

From the looks of it, the supplemental material is all exclusive.

With notable performances by the cast, Darren Aronofsky's 'Noah' is a marvelous production of a classic myth motif that's both inspiring and stimulating. The talented filmmaker of usually dark themes takes a familiar tale and reinvigorates with splashes of the Hollywood blockbuster epic, making it entertaining as it is thought-provoking. The film arrives on Blu-ray with amazing video and a reference-quality audio presentation. Supplements appear to be exclusive to the format, making the overall package easy to recommend and a satisfying purchase for fans.

Sale Price 7
Buy Now
3rd Party 31.99
In Stock.
See what people are saying about this story or others
See Comments in Forum
Previous Next
Pre-Orders
Tomorrow's latest releases