From a Whisper to a Scream

On the night his niece is executed for committing a string of brutal killings, historian Julian White (Vincent Price) reveals the sinister secrets of her hometown, Oldfield, Tennessee, a horrific hamlet that spawns evil! But as the town's murderous legacy is exposed with White's chilling accounts - including stories of a necrophiliac madman, a voodoo priest with life-prolonging powers, and a legion of children with an appetite for flesh - White doesn't realize that he is about the write the final chapter of Oldfield's morbid history...in his own blood!

Alternatively known as 'The Offspring' during its U.S. theatrical run, 'From a Whisper to a Scream' follows a long and prestigious tradition within the horror genre, one dating as far back to notable silents as 'Waxworks,' Fritz Lang's 'Destiny' and the great classic 'Dead of Night.' If you don't see the connection, I'm referring, of course, to the horror anthology, an assortment of short scary stories loosely related by a larger, overreaching plot usually revolving around a narrator or a host introducing each one. This chilling but illustrious ritual reached its peaked in the 1960s and 70s with cherished favorites like 'Black Sabbath,' 'Tales from the Crypt' and 'Trilogy of Terror.' But these two decades also produced several more such anthologies, such as the lesser known but equally worth treasuring Masaki Kobayashi's 'Kwaidan,' 'Asylum' and 'Spirits of the Dead.' During the 80s, this devilishly fun subgenre wasn't much of a draw at box offices, but they remained popular enough to open doors and pretty much guarantee the success for the awesome HBO series 'Tales from the Crypt.'

This 1987 cult favorite from relative newcomer at the time Jeff Burr ('Leatherface: The Texas Chainsaw Massacre III,' 'Pumpkinhead II: Blood Wings') is one such spooky collection that kept the tradition alive. Admittedly, Burr's direction is somewhat amateurish and a bit clunky at times, but he was still learning the ropes. And he demonstrates enough workmanlike skills to entertain horror hounds with each amusingly gruesome tale, which were written by C. Courtney Joyner. The four separate stories largely feel like a blend of archetypal EC Comic shockers and the terror fantasy of 'The Twilight Zone.' However, they do lack the sort of cleverness and coherent logic appreciated in those classics, the type required for pulling off the shocking twist ending that should leave audiences with a wicked smile of satisfaction. The story I'm thinking of is the fourth and final piece with Civil War Union soldiers captured by a deranged band of Southern orphans living on an isolated farmhouse. It's a disturbingly dark tale with a conclusion that doesn't make much sense.

It's unfortunate really that Burr and Joyner conclude their collection on such a poor note, but thankfully, the three previous tales are enjoyable enough to leave viewers pleased to enter the mysteriously haunted Tennessee town called Oldfield where all four stories are said to take place. In fact, this is one of the movie's cleverer moments, primarily because it features an awesome appearance by horror icon Vincent Price. As the creepy town's historian Julian White, he introduces each spine-tingling yarn as a piece of the town's horrifying history. Each is funnily meant as evidence of the homicidal tendencies of a woman recently put to death and told to a nosy reporter (wonderful character actress Susan Tyrrell, probably best known for 'Cry-Baby' and 'Forbidden Zone'). They ultimately don't explain anything except that this otherwise quaint community exists in a place where evil influences its residents. And with the Master of Menace explaining all this in that squeaky but deadly serious voice of his, providing an air of campy gravitas, we never doubt his words. 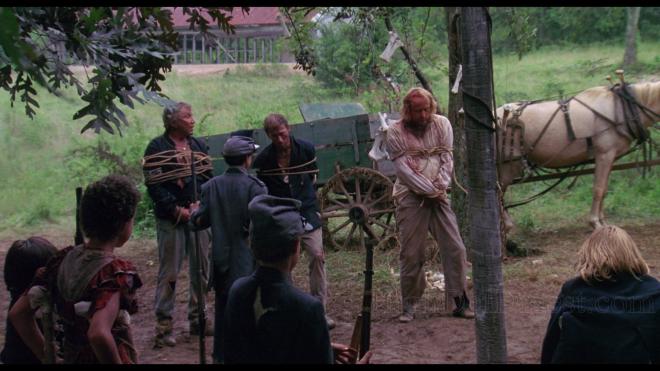 Another interesting aspect of the plot is that each story is told in reverse chronology, meaning that we start in modern times but end in the past. This was a pretty original style, if not somewhat inventive, that differed from other horror movie anthologies, especially those based on pre-existing franchises or riding on the coattails of established names of the genre, such as 'Creepshow.' The first tale is the most recent event and follows a Norman Bates type loner named Stanley (Clu Gulager of ' The Return of the Living Dead'). For the most part, this a great, brainsick fable about a socially awkward introvert with a sad-sack crush for a coworker but suffers from grisly visions of murder that apparently must be fulfilled. Adding to the creepiness is the disturbingly close relationship he has with sister, but, like the aforementioned Civil War story, it ends on a bizarre, nonsensical twist that leaves a sour taste while possibly explaining the film's title change to 'The Offspring.' It's not enough to ruining everything that preceded it, but the filmmakers should have spent more time on it.

The stories that quickly follow are arguably the best ones in 'From a Whisper to a Scream' because the dementedness up a notch and moving us to the rural creepy swamps of the 1950s. Here, criminal Terry Kiser ('Friday the 13th Part VII: The New Blood,' 'Weekend at Bernie's') stupidly threatens a mysterious voodoo man (Harry Ceasar) for the secret to an immortal life. The cosmic irony twist doesn't really pack the surprise punch it clearly was aiming for, but the bloody makeup effects at the end more that make up for it, whetting our appetites for the next macabre tale. For me, the best entry in the entire film is the third segment set during the 1930s freak show circuit where glass-eater Steven (Ron Brooks) falls for normal local girl Katharine (Martine Beswick). Although the actors lack any kind of chemistry to sell their attraction, the story is enjoyable because apparently their love affair is forbidden by the carnival's overbearing owner Snakewoman (Rosalind Cash). Tensions boil to the point of an awesomely gruesome and gory finale, and it alone makes the film worth watching.

Shout! Factory brings 'From a Whisper to a Scream' to Blu-ray under the distributor's Scream Factory line. The Region A locked, BD50 disc is housed inside the normal blue case with reversible cover art. At startup, the disc goes to an animated menu with full-motion clips and music.

The compilation of spooky campfire tales scares the bejesus out of Blu-ray with a very good 1080p/AVC MPEG-4 encode, showing that the elements are in pretty great condition. Of course, the presentation is far from perfect, sprinkled with the occasional specks and soft, poorly resolved sequences, but as is, the video is nicely defined with plenty of visible details throughout.

Presented in its original 1.85:1 aspect ratio, the video is full of clean, well-rendered colors, particularly greens and reds, making skin tones appear natural. However, much of the overall palette seems to favor yellowish earth tones. Daylight sequences naturally look best while nighttime, poorly-lit scenes lose a bit of the finer details, but contrast and balance are nonetheless handled well.

The four short horror stories also arrive with a strong uncompressed PCM stereo soundtrack, but it comes with a few notable limitations. Although the track comes with an appreciable amount of background activity and a good sense of presence, imaging nonetheless feels restricted and narrow. Much of the original stereo design seems as though it's presented here in mono because rarely do effects discretely move from the center of the screen. When they do from time to time, however, they're fairly convincing.

To be fair, it's uncertain if this is due to the conditions of the original recordings or a fault of the codec. In either case, the mid-range is pretty uniform, creating a somewhat horizontal plane of sound that makes several of the action scenes feel flat and plain. Low bass doesn't offer much, but it's adequate and generally acceptable while vocals are well-prioritized but occasionally come off a bit detached and humdrum.

Alternatively known as 'The Offspring' during its U.S. theatrical run, 'From a Whisper to a Scream' follows a long and prestigious tradition within the horror genre, that of the horror anthology. And this low-budgeted feature, where genre icon Vincent Price stars as a mysterious local historian, delivers four devilishly amusing tales of the macabre that'll horror hounds satisfied. The Blu-ray arrives with a strong audio and video presentation that leaves previous edition screaming in purgatory. Best of all is an amazing, jam-packed collection of supplements celebrating the film, its history and the love of the genre in general, making the overall package an awesome addition to the cult collection.

Sale Price 47.5
Buy Now
3rd Party 47.5
In Stock.
See what people are saying about this story or others
See Comments in Forum
Previous Next
Pre-Orders
Tomorrow's latest releases