When five teenagers unwittingly resurrect a demon, nobody is safe from the hideous creature's gruesome rampage. But this monster is different - inside it dwells the soul of a boy murdered years ago. Can the evil beast be destroyed...without killing the innocent boy trapped within?

Five years too late, 'Pumpkinhead II: Blood Wings' is an unintentionally comical concoction of supernatural revenge flick, origin story, and ultimately, an unrelated sequel to Stan Winston's 1988 cult favorite. Loyal fans of a franchise that includes two TV follow-ups and a comic book series will nonetheless find some value in the low-budget direct-to-video production, mainly because it expands on the legend of the crooked, disfigured vengeance demon. However, the script by Constantine and Ivan Chachornia bites off more than it can chew, with a story that somewhat humanizes the creature and devises certain events that'll leave more judicious viewers wondering why all this trouble after three decades. At its worst, the filmmakers rely on tired, stale stereotypes to accomplish a conclusion that frankly and shamelessly piles on the cheese. Ironically, it's the movie's badness that eventually makes if atchable.

The plot commences in 1958 — similar to its predecessor, only the following year after that movie's prologue — with a deformed child that apparently lives in the woods and is cared for by a nameless woman we're allowed to assume is his mother and who will eventually become the old witch capable of summoning Pumpkinhead. And here's one of the problems with this rather weak sequel; audiences are permitted, if not welcomed outright, to make assumptions based on nothing more the speculations. Even worse, these guesses are informed from the point of view of the most grossly stereotypical collection of teenagers imaginable, starting with a clichéd group of teens set on hurting the earlier kid named Tommy for absolutely no explained reason other than they are horrible jerks. It's also through them we are led to believe the harmless child is the spawn of Pumpkinhead, who waits 35 years to seek vengeance? 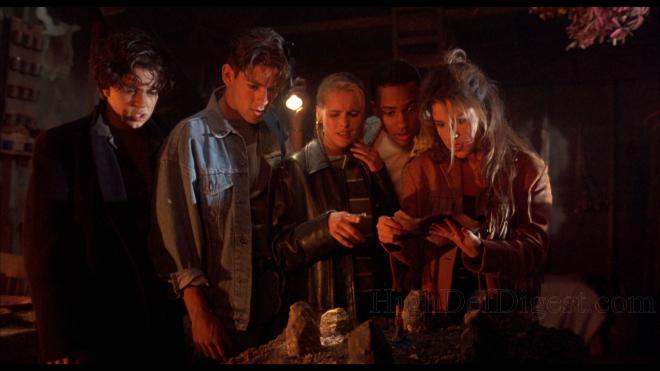 When we suddenly jump to 1993, teenagers, it would seem, have not changed all that much, becoming, in fact, more obnoxious, irresponsible and wanting of respect and human decency. A new batch of underage, ne'er-do-well whippersnappers, led by the one-ear-pierced, cheeky, sleeveless-shirt-wearing Danny (J. Trevor Edmond), unleash mayhem in their quaint country town purely as a remedy for combating their boredom, unwittingly — or more like, stupidly — reviving the titular demon from his slumber. One accomplice is none other than Soleil Moon Frye of 'Punky Brewster' fame and whose character is evidence of the script lack of logical consistency — one minute she's against grave-digging and playing with black magic, and the next instant, partakes in the hellish fun with a wickedly excited smile. Another member is conveniently the sheriff's daughter, Jenny (Ami Dolenz), who we are told is a serious troublemaker but has completely turned a new leaf when deciding to chill with hooligans.

As the story chugs along, assaulting its audience with more tired, conventional devices and pointless subplots, like Danny being the son of a seemingly corrupt judge (Steve Kanaly), viewers will strain to keep engage and awake for the full 88-minutes the filmmakers ask to complete a coherent movie. Sherriff Sean Braddock (Andrew Robinson) fittingly happens to be a former resident of the town, familiar with the legend of Pumpkinhead, who, aww-shucks, moves back home with family to get away from the violence, murder and chaos of the big city. How apropos. Nevertheless, director Jeff Burr, who's made a career making sequels while delivering light amusement like 'From a Whisper to a Scream' and 'Night of the Scarecrow,' keeps things moving at brisk, pleasing-enough pace. Then again, the real highlight of 'Pumpkinhead II' is seeing the creature rain some well-deserved comeuppance with Greg Nicotero's special make-up effects complementing the horror action.

Shout! Factory summons 'Pumpkinhead II: Blood Wings' to Blu-ray under the distributor's Scream Factory line. The Region A locked, BD50 disc is housed inside the normal blue case with reversible cover art. At startup, the disc goes to a menu screen with full-motion clips while music plays in the background.

The folks at Shout! Factory breathe new life into the mostly-forgotten supernatural horror follow-up with a first-rate 1080p/AVC MPEG-4 encode that'll have genre fans wishing more neglected titles received this kind of love. Admittedly, contrast runs a tad on the hot side and a small number of scenes are softer and more poorly-resolved than others, and although a few spots come with some negligible posterization, whites are nonetheless brilliant and consistently bright. Fine object details are quite sharp with clean, distinct lines in nearly every sequence while the faces of actors expose trivial blemishes and every wrinkle with lifelike textures. Black levels are accurate and true, providing the 1.78:1 image with welcomed dimensionality, and colors are boldly rendered with vivid primaries.

And the surprises keep coming with a terrifically satisfying DTS-HD Master Audio stereo soundtrack that far better than would ever expected for a low-budget direct-to-video sequel.

Full of amusing ambient effects, imaging feels broad and expansive with discrete background activity and excellent fluid movement between the channels. In fact, the design, offering a variety of noises from birds chirping in the trees and leaves blowing in the air to the score of Jim Manzie, makes for one of the movie's most impressive aspects. Dynamic range and acoustical details are crystal-clear and distinct throughout with exceptionally good separation between the highs and mids, allowing for the tiniest distinction of debris during action scenes or the loud crack of thunder to be heard with outstanding clarity. Low bass is equally surprising, providing some hearty weight to the action and music, though gunshots are admittedly anemic and wanting by comparison. Nevertheless, with clean, well-prioritized vocals in the center, this lossless mix will leave devoted fans amazed and quite satisfied.

Riddled with tired clichés and conventional plot devices, 'Pumpkinhead II: Blood Wings' is frankly a poor successor to the first, far-more amusing film directed by the legendary Stan Winston. And yet, it squeaks by, mildly entertaining via various unintentionally funny moments. The Blu-ray arrives with an excellent audio and video presentation and a rather nice assortment of supplements, making the overall package one which loyal fans will find quite pleasing and worthy of their collection.

Sale Price 110.32
Buy Now
3rd Party 108.93
In Stock.
See what people are saying about this story or others
See Comments in Forum
Previous Next
Pre-Orders
Tomorrow's latest releases