Carrie clone about a shy schoolgirl who is tormented by her cruel classmates. Among other things, Jennifer has the ability to attack people she particularly dislikes with snakes she creates with her mind.

As is so often the case in Hollywood, when a movie finds unexpected box-office success, studios churn out more of the same in hopes of capitalizing on what they reasonably believe a pop-trend amongst moviegoers. When 'Carrie (1976)' became a surprise hit, many horror flicks soon after featured the theme of school bullying and revenge, some with a supernatural bent while others combined the "slasher" element into the mix. And while there is much to be said of this common theme in movies like 'Prom Night,' 'Graduation Day,' 'Massacre at Central High,' 'Terror Train,' 'The Pit' and a pair of underrated gems 'Dark Night of the Scarecrow' and Lucio Fulci's 'Aenigma,' no movie is probably more of a rip-off of Brian De Palma's now-classic supernatural tale than Brice Mack's 'Jennifer.' When comparing the two, the similarities range from subtle coincidences to the blatantly obvious.

And yet, in spite of its close resemblance, the 1978 supernatural horror film is a genuinely good feature on its own, pushing the whole nightmare scenario of a social outcast wanting gruesomely violent revenge to a new level. Kay Cousins Johnson's script even has audiences practically cheering for the deaths of some truly awful bullies, whose shockingly terrible and sometimes horrifying antics reach the point of criminal. Our protagonist is another redheaded outsider named, of course, Jennifer (a terrific Lisa Pelikan doing her best to seem just outside of the attractive scale). A poor, innocent and somewhat naïve girl attending a prestigious school on a scholarship because, as we're told, she's brilliant, Jennifer comes from less-fortunate background compared to the other girls, presumably from an Appalachian family based on a few comments and the unique Southern drawl of her grumbling, crotchety father (Jeff Corey). 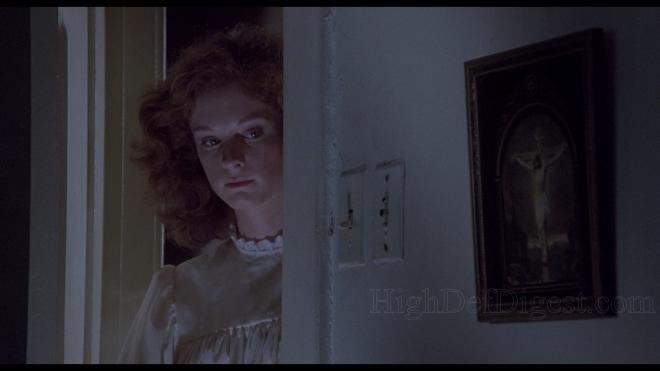 Like Carrie, Jennifer also possess a hidden telekinetic power, as well as some kind of third-eye ability that Mack creatively depicts in relatively comical 70s fashion, which she later uses for exacting her retribution. Along those same lines, her father, too, is a religious fanatic who finds answers to life's daily chores and challenges in random passages of scripture. But Johnson's story takes it a step further with tragically glum single dad's particular faith originating in the strange snake-handling Pentecostal denomination. Comparatively, he's not abusive as much as a cantankerous old man with an unusual belief but disappointed with his life. Jennifer has bigger problems with the school's popular blonde Sandra (Amy Johnston of 'The Buddy Holly Story'), a wickedly vicious spoiled brat that would give Regina George, Emma Small, Johnny Lawrence, Nancy Downs and Nancy Allen's Chris Hargensen a run for their money.

And it's this aspect of the story which ultimately sells 'Jennifer' and makes it a cult classic, in defiance of its glaring parallels to Brian De Palma's understandably better-known and more celebrated 'Carrie.' Unlike the petty self-serving egotist Chris, Sandra is a surprisingly despicable, loathsome human being who actually thinks of herself as the victim, a self-involved egomaniacal teenager with delusions of grandeur with sociopathic tendencies. Her hatred of the timid and friendly Jennifer is understood as a general dislike of Jennifer's upbringing and social class, which in her mind is justification enough for torturing our heroine. A concerned teacher (Bert Convy rocking his signature perm) and a dislikable principal are also introduced, but their subplot doesn't really much to remedy the situation. Instead, the filmmakers have Sandra's downfall and Jennifer's warranted retaliation come from within the bully's circle, creating a tinge of irony that she's the cause of her own demise.

Kino Lorber brings 'Jennifer (1978)' to Blu-ray on a Region A locked, BD25 disc inside the standard blue keepcase. At startup, the disc goes directly to a static screen with the usual options and music in the background.

'Jennifer' rallies the snakes together on Blu-ray with a sensational, highly-detailed 1080p/AVC MPEG-4 encode. Showing that the source has aged remarkably well over the years, the transfer displays excellent resolution and clarity, laying bare the most minute and negligible imperfection along the walls and on various pieces of furniture. The clothing shows distinct textures, individual hairs are sharply defined and facial complexions are terrifically revealing and lifelike. Spot-on contrast allows for stunning visibility in the distance, and primaries are vivid while bold secondary hues provide warmth and energy. With rich, opulent blacks and strong shadow delineation, the 1.78:1 image is an outstanding high-def presentation.

Unfortunately, things take a dive in the audio department with a DTS-HD Master Audio mono soundtrack that leaves much to be desired. Although true to the original design, the track is a sadly one-dimensional, very narrow presentation with little presence. At its best, vocals are for the most part clean and distinct, and background activity is plainly heard. However, a majority of the runtime is defeated by a loud, consistent hiss and the occasional pop. Dynamic range is noticeably limited and largely flat, making the action feel very uniform with several instances of bright, shrill noise in the higher frequencies. Bass also feels weirdly and uncomfortably exaggerated, making this lossless mix a disappointment.

In spite of its close similarities to Brian De Palma's 'Carrie,' Brice Mack's 'Jennifer' is a genuinely good feature on its own, pushing the whole nightmare scenario of a social outcast wanting gruesomely violent revenge to a new level. The cult classic arrives on Blu-ray with an excellent video presentation but a disappointing lossless audio mix and lacking any special features. Nevertheless, the bare-bones release is sure to attract cult enthusiasts and is worth a look for the curious.