The story of the life and career of the early rock and roll singer, from his meteoric rise to stardom, to his marriage and untimely death.

The key to any good biographical drama, particularly when it's based on the life of a celebrated public figure, is the performance of the main actor. Whether it's the story of a person who made history ('The King's Speech'), an inspirational yarn about overcoming difficult challenges ('127 Hours') or a eulogized tribute to an artist's work ('Frida'), the make-or-break core of these films ultimately rests on the shoulders on the portrayal of the central character. The rest of the production is, of course, just as important but often, if not easily, overlooked given the very excellent acting. In Steve Rash's directorial debut, 'The Buddy Holly Story,' Gary Busey turns in a career-changing, Oscar-nominated performance as the legendary pioneer rocker, proving the point that a biographical film can still be a success in spite of the talent behind the camera. And sadly, much in this production can seem pretty mediocre and at times, uninspired.

Rash ('Under the Rainbow,' 'Can't Buy Me Love') arrives at the tragic but already well-known conclusion with an admirable pace, however, there's nothing standout or notable about the film, which frankly feels pedestrian and somewhat dull at times. It's competent and efficient enough to have audiences cross the finish line, feeling like they've gained some deeper understanding of the rockabilly icon, but at the same time, it's a missed opportunity for greatness, in light of the production's other commendable aspects. The stage design of Joel Schiller and Thomas L. Roysden, for one thing, places viewers right in the middle of the late 1950s. From the cars and clothing to the art-deco interiors of New York and the small town feel of Lubbock, Stevan Larner photographed each scene with a fondly dreamy, nostalgic sense of innocence for the period. 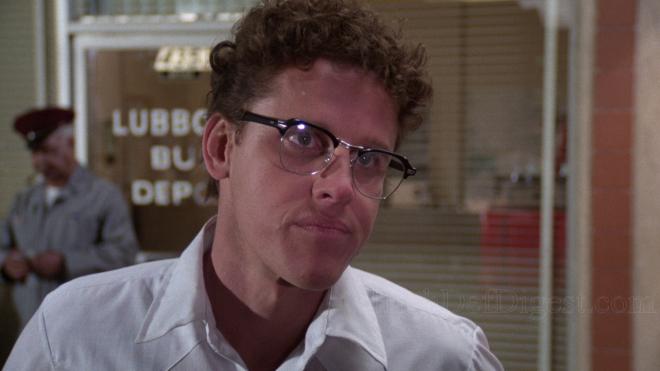 When turning our attention to Busey's remarkably memorable portrayal, Rash's shortcomings becomes all the more prevalent. Busey amazingly embodies everything we know and love of Buddy, starting with the fact that he actually performed the vocals himself, even imitating the singer's signature vocal hiccups with pleasing accuracy. He wouldn't pass for Buddy's twin, but the similarities are sometimes uncanny. His talents are wonderfully matched by an equally terrific cast, particularly Charles Martin Smith's standup bass player Ray Bob Simmons, Don Stroud as disillusioned drummer Jesse Charles and Maria Richwine as Holly's wife María Elena Santiago. Every actor's interactions and confrontations are genuine and heartfelt, but moments which are meant to be moving or bittersweet are sadly ruined by camerawork that's better suited for television, turning poignant scenes into miniseries melodrama.

Moreover, the issue of accuracy versus the amount of creative liberties in 'The Buddy Holly Story' can be taken into account when discussing the film's drawbacks. Loosely adapted from the novel Buddy Holly: His Life and Music by John Goldrosen, most immediate is The Crickets band being reduced to two fictitious members and for exaggerating the behind-the-scenes incidents. Then again, real life is rarely that interesting, and Holly's quaint rise to prominence and notoriety is honestly not the attention-grabbing sort to entertain audience for almost two hours. Certain liabilities and studio contracts forced the filmmakers to make several alterations that dramatized the legend's tragically-short four years of fame. Granted, the changes are severe enough to madden Buddy Holly fans and rock historians, but they are a necessary evil to a medium that, at the end of the day, earnestly celebrates the legacy of an influential music legend.

Steve Rash's 'The Buddy Holly Story' comes to Blu-ray as a Limited Edition release courtesy of Twilight Time. The Region Free, BD50 disc is housed inside a blue, eco-cutout case accompanied by an eight-page booklet with a thoughtful essay written by screenwriter Julie Kirgo. At startup, the disc goes straight to a static menu with the usual options.

Whatever the source Twilight Time brings the biographical drama to Blu-ray with excellent results, showing that the elements used are in exceptional shape and could greatly benefit from a full restoration and remaster. As it is, the 1080p/AVC MPEG-4 encode shows brilliant, well-balanced contrast, exposing every nook and cranny in the background and in dimly-lit interiors. Fine lines and objects are distinct with terrific textural details in the clothing and healthy facial complexions of the cast. Blacks waver just a tad, but are for the most part rich and accurate while colors are bold and true to life.

Only issues bringing the score down a couple notches are clearly related to the condition of the source and the original photography. Several scenes are a bit on the blurrier, softer side with a few more poorly-resolved sequences. A couple hot spots bloom and expose a bit of noise as well, but in general, the high-def transfer looks terrific.

The 1978 music flick rocks the house with a superb DTS-HD Master Audio 5.1 soundtrack that for the most part, admirably remains true to the original design while also offering an awesome immersive experience for Buddy Holly fans. For a majority of the time, the lossless mix is a front-heavy affair with lots activity taking place in the center of the screen. Nevertheless, there's plenty of clarity and detail in the background to enjoy, creating a terrific soundstage with excellent presence and a distinct mid-range. A few discrete, convincing effects broaden imaging with well-balanced separation and good movement between the channels while dialogue remains well-prioritized and intelligible at all times.

Where the talented engineers smartly take advantage of the surrounds is in the music of Buddy Holly, as sung by Gary Busey. As if having a live performance done in one's room, each guitar note, bass rhythm and drum beat spreads across the entire soundstage with stunning richness and warmth while subtle echoing and bleeding in the back. Every time the band plays in front of an audience or inside a music hall, the room comes alive with a terrifically satisfying and enveloping soundfield that puts the listener right in the middle of the front row. Those moments, only reserved in honor of Holly's legacy, make this lossless mix a must-listen for fans and audiophiles alike, earning it ecstatically high marks.

Steve Rash's directorial debut, 'The Buddy Holly Story,' can at times feel better suited for a miniseries melodrama. However, great production values, an awesome rock soundtrack and a memorable performance by Gary Busey keep the film afloat with a satisfying enough conclusion. The Blu-ray from Twilight Time arrives with a fantastic high-def transfer and an even better lossless audio presentation that will rock the house. Supplements are unfortunately light, but the overall package is sure to please fans all the same.